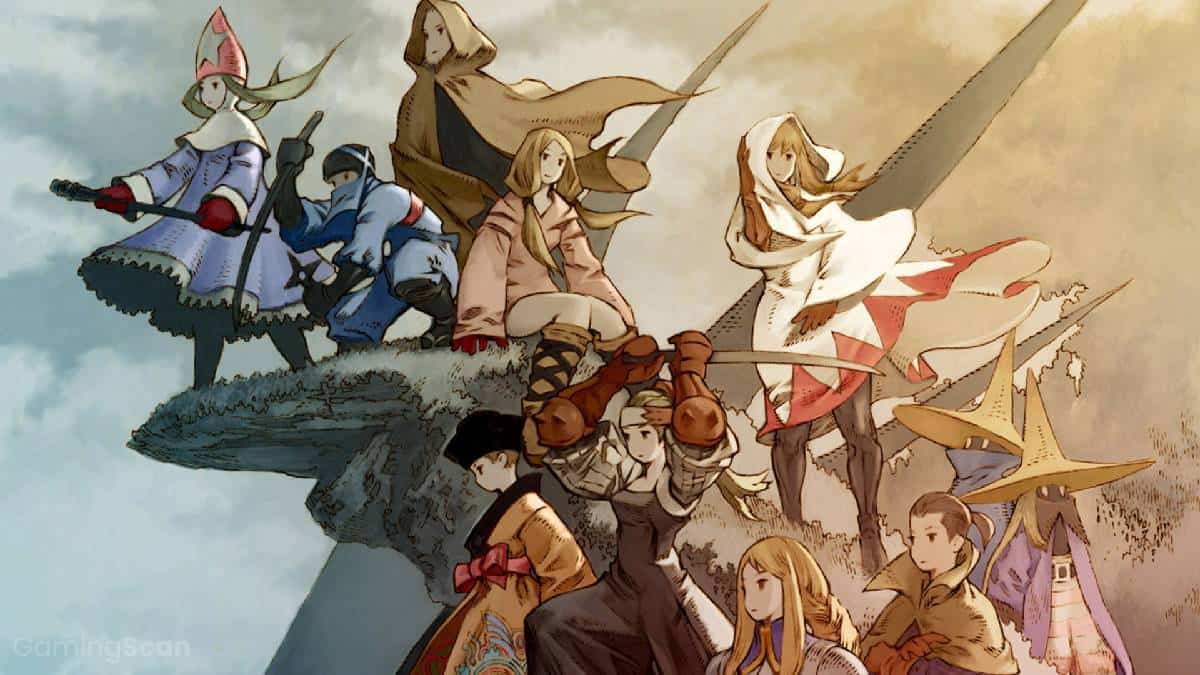 For a long time, the Final Fantasy Tactics games were coveted as the go-to JRPG for many players, starting with the original FFT on PS1 and later FFT Advance on GBA.

While later entries and re-releases throughout the early 2000s were well-received, the turn-based RPG would ultimately fall into obscurity due to a decision by Square Enix (formerly Square Soft) to adapt the series for mobile devices.

However, fans of the original will still fondly remember how revolutionary the series was for the time, presenting players with robust class and ability systems to dive into as they made their way through a lengthy 40-60 hour campaign filled with intriguing side quests and secrets to discover.

Over the years, several indie studios have attempted to recreate FFT‘s distinct formula, with some good and bad results.

Here, we’ll be highlighting the best games like Final Fantasy Tactics to try if you find yourself craving classic turn-based tactics gameplay. 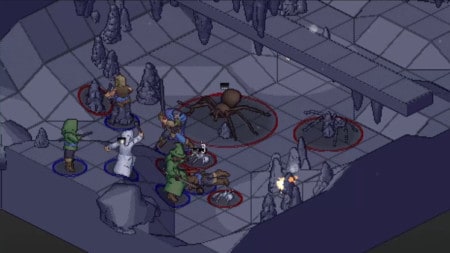 Developer: From Nothing Game Studios

Tactics V: “Obsidian Brigade” is a retro-inspired turn-based RPG that makes no attempt to hide its admiration for old-school tactical RPGs like FFT.

This is most evident when it comes to presentation, with the game utilizing handcrafted 3D assets that have been adapted to fit a 2D isometric perspective. As a result, characters and environments feel a lot more dynamic while still retaining some aspects of the sprite-based designs found in older RPGs.

The story follows a group of adventurers known as the Obsidian Brigade as they make their way across the kingdom of Auria, encountering and battling enemies from rival clans. Over the course of the game’s 20-hour campaign, players will be exposed to an intricate turn-based combat system with numerous targeting styles, character actions, and reactions to master.

Additionally, Tactics V includes 13 character classes along with 50 skills and 140 powers to wield in challenging tactics- based battles. 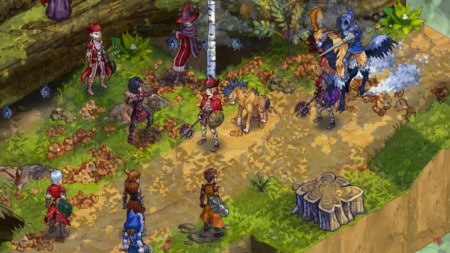 Fell Seal is very much inspired by FFT, from its extensive class-based management system to its tactical turn-based combat. The game takes place in a fantasy steampunk world ruled by a group known as the Immortal Council.

These eternal rulers entrust mortal officers of justice called Arbiters to watch over the lands and protect its citizens from danger.

You play as Kyrie, an agent of the Arbiters who begins enlisting other characters to join their cause as they set out to uncover the corrupt practices behind the Immortal Council’s authority.

The game includes over 20 different classes with unique skills and abilities that unlock as your progress. Instead of using a traditional permadeath system, Fell Seal requires characters to rest after falling in battle, encouraging you to develop and experiment with different party members.

Alvora Tactics is an indie RPG that harkens back to classics like FFT while incorporating more modern features such as destructible terrain and part-handcrafted, part-procedurally generated environments. The end result is a full-bodied tactical RPG with deep combat and skill systems that are still easy enough to understand.

In it, you control a band of warriors on a quest to conquer the Great Serpent Alvora and defeat any enemies who get in their way. The game includes 10 character races, 23 classes, and over 200 active and passive abilities that can be upgraded over time.

Lastly, Alvora Tactics was built using the same engine, mechanics, and setting as Voidspire Tactics, another retro-style RPG that unfortunately didn’t make this list but is still worth checking out. 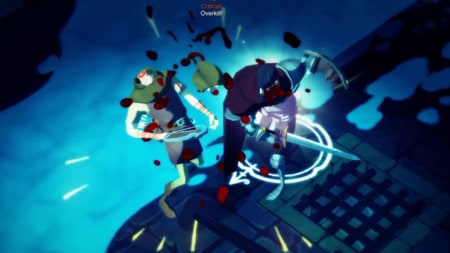 Sword Legacy: Omen sees you embarking on a dark and gritty reimagining of the tale of King Arthur from the perspective of Uther, an unforgiving knight on a quest to find the fabled Excalibur sword and rescue his kidnapped lover.

Accompanied by the eldritch sorcerer Merlin and a band of misfit companions, players make their way across the land of Broken Britannia, which has fallen into despair after the assassination of its leader.

While Sword Legacy’s class and ability management systems may differ from FFT, it offers a lot more depth in terms of minute-to-minute combat. Battles can be quite demanding and see you facing off against mobs of plague-stricken enemies and corrupted knights who can easily deplete your party’s willpower and leave them in a state of panic.

Thankfully, the game offers the flexibility to adapt heroes to fit your playstyle and provides plenty of opportunities to bridge the gap by taking advantage of environmental traps such as explosive barrels and ledges that can be used to kick enemies off the map. 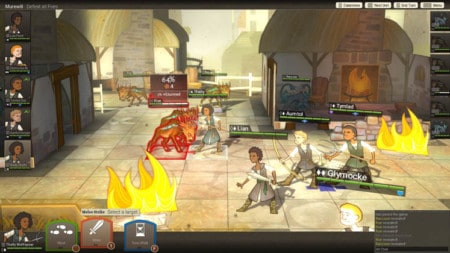 Wildermyth is a tactical RPG with a distinct 2D papercraft aesthetic that makes characters and scenery come to life. Combat is focused on using teamwork and positioning in tandem with characters’ special abilities and objects in the environment.

This allows more skilled players to take advantage of techniques like walling and flanking in order to get the upper hand on the opponent.

While it may not look like it, the game is very much inspired by traditional tactics games like FFT, granting players control over nearly every aspect of their character, ranging from how they approach battles to their physical appearance, relationships, and more.

Each playthrough sees you leading a new party of procedurally generated heroes who will evolve over time, growing older, falling in love, and one day meeting their demise. 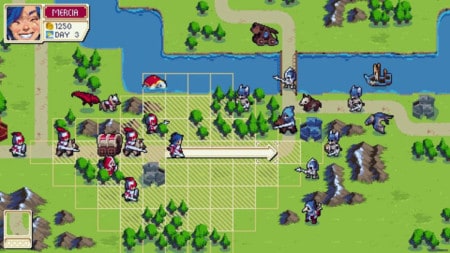 While not directly inspired by FFT, Wargroove is a turn-based tactics game that serves as a spiritual successor to the Advance Wars series, swapping its modern military aesthetic in favor of fantasy-themed characters and environments.

Set on the island continent of Aurania, the 2D game sees you controlling one of fifteen commanders as they wage war against rival factions.

Each commander has their own motivations, personality, and signature move called a “Groove,” which can alter the battlefield, causing the AI to have to re-strategize as well as in general make battles feel more exciting.

Wargroove‘s unique campaign structure lends itself to replayability and is further complemented by a custom map and mission editor. 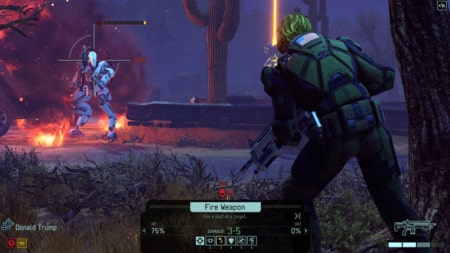 XCOM 2 is a turn-based tactics game and the sequel to XCOM: Enemy Unknown. Set 20 years after the events of the previous game, it follows a military resistance fighting against the alien occupation.

Players are placed in charge of the Avenger, a new mobile base operation capable of issuing commands to squad members in real-time. Additionally, the Avenger is useful for researching enemy tactics between missions in addition to new gadgets, weapons, and tech.

As you progress through the game’s 30+ hour campaign, you’ll have the option to recruit new soldiers belonging to an array of classes with distinct skills and abilities that can be unlocked and upgraded over time.

Customization is heavily emphasized in XCOM 2, allowing you to change your soldiers’ names and personalities as well as modify the appearance of their uniforms and weapons. 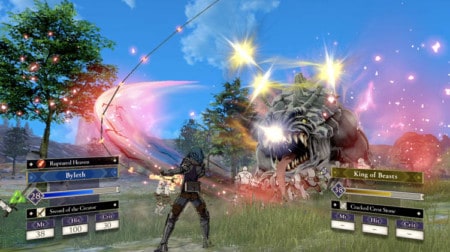 Although FFT and FE have historically catered to two different audiences, both share a lot of similarities when it comes to gameplay. The latest entry in Nintendo’s strategy RPG takes players on a lengthy 48-hour adventure where they’ll turn inexperienced students into hardened warriors.

After swearing allegiance to one of three factions: the Black Eagles, the Blue Lions, or the Golden Deer, you’ll begin training students out in the field while also managing their daily schedule.

The game affords you a lot of freedom in shaping which path your students follow, offering a wide selection of activities designed to hone their combat prowess and help you craft an unstoppable army.

In many ways, Three Houses harkens back to the series’ roots, with weapon durability, permadeath, and combat arts making a return alongside updated visuals. 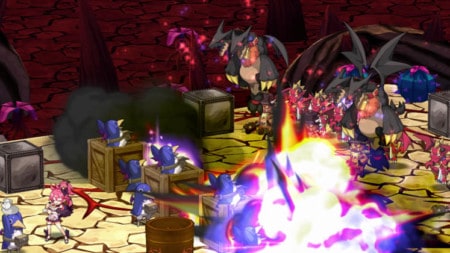 The Disgaea series has been around for quite some time and began to hit its stride around the time the original FFT was released.  If you enjoy the more technical aspects of tactics RPGs, Disgaea 5 Complete is a great entry point that offers tons of flexibility when it comes to min-maxing the build of each character in your party.

This allows you to experiment and come up with really ridiculous builds capable of dealing absurd amounts of damage, honing in on survivability, or striking the right balance between the two.  A large part of the game is spent merely figuring out its many, many complex mechanics and how they relate to one another.

Lastly, Disgaea games are known for their weird, often downright wacky tone, which may not be appealing to every FFT fan. 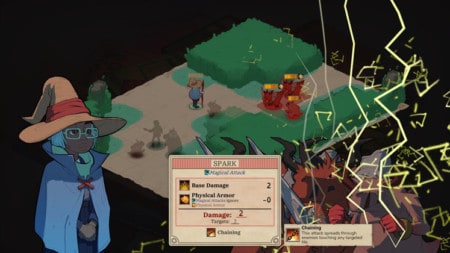 Wintermoor Tactics Club is presented as a visual novel tactics game that carefully blends both story and gameplay. You play as a group of outcasts with unique powers who set off on a quest to break down the barriers separating Wintermoor Academy’s numerous cliques while also dealing with their own personal problems.

On your journey to becoming powerful fantasy heroes, characters will level up, giving you access to new upgrades that can help dominate battles as the difficulty ramps up.

The further you spread the club’s influence, the more characters will be attracted to join your party, allowing you to try out new team compositions and devise new strategies. 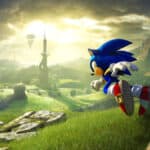