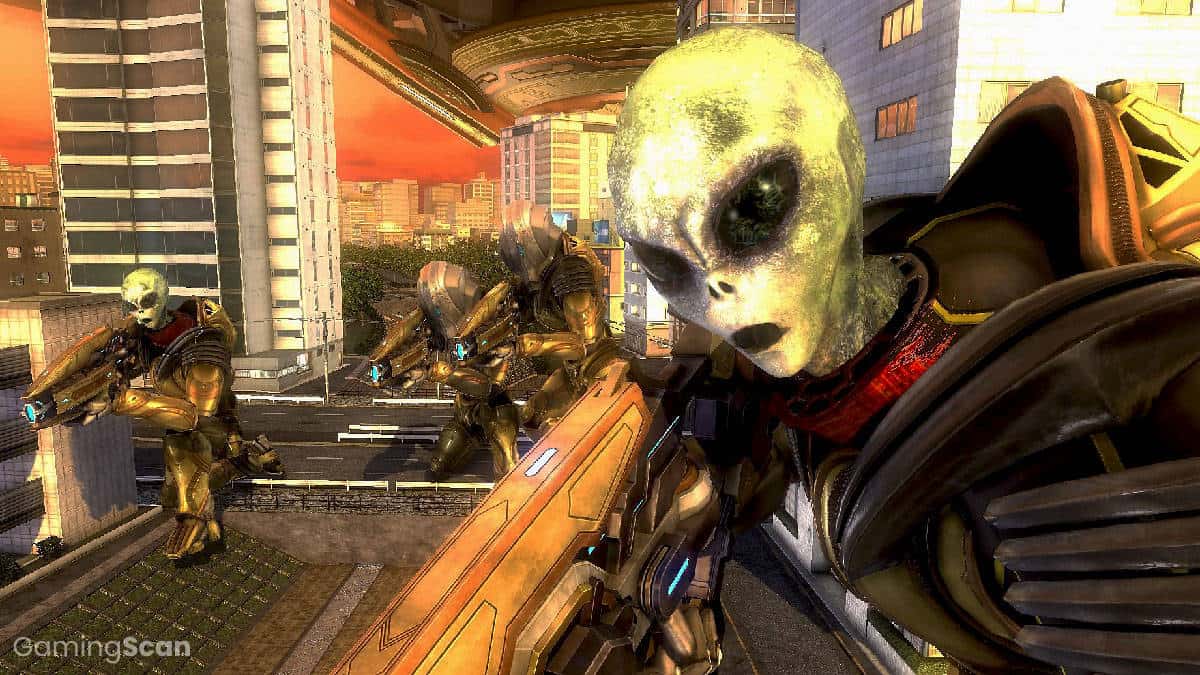 From terrifying Xenomorphs to cute and cuddly slime monsters, video game aliens can come in all sorts of shapes, sizes, and temperaments.

While most games cast them as enemies, there are also games like Mass Effect that let you have alien companions in your party or Destroy All Humans!, where you directly control and play as an alien.

In this list, we’ll help you find your new favorite game by highlighting the best games with aliens in 2023, including games about aliens and the best alien games.

We’ll be updating this list in the future with new titles, so make sure to check back and let us know if we missed any of your favorite alien games!

The first game we’ll be recommending is The Eternal Cylinder, an action-adventure survival title in which players take on the role of alien creatures called Trebhums.

The Trebhums live on an alien planet inhabited by other exotic lifeforms and surreal typography that changes over time due to mutations.

Gameplay sees you overcoming puzzles and challenges throughout a hostile world on the brink of collapsing due to a mysterious metal roller that’s constantly destroying the land.

Of course, this list wouldn’t be complete without at least one entry from the iconic Alien franchise and all its extraterrestrial horrors.

Gameplay-wise, Fireteam Elite is very reminiscent of games like Left 4 Dead or Aliens: Colonial Marines for a more in-franchise comparison, and emphasize teamwork and communication.

There’s no shortage of aliens in Metroid Dread and the main character Samus even has ties to an ancient race of bird-man creatures known as the Chozo.

The Chozo are responsible for creating extraterrestrial enemies such as the titular Metroids as well as Mother Brain, both of which appear throughout the series.

In Metroid Dread, Samus sets out to investigate a mysterious transmission coming from planet ZDR where she encounters a host of new monsters, both organic and robotic.

Mass Effect is known to weave cosmic politics into each game’s personalized story brimming with complex characters that include alien companions.

And while they may share some qualities with humans like Shepard and Ryder, their home worlds and governments wildly differ from each other.

The best way to experience the trilogy today is through Mass Effect Legendary Edition, which remasters all three games with visual enhancements, technical improvements, and gameplay adjustments.

Serving as a follow-up to the hit first-person survival crafting game, Subnautica: Below Zero sees you returning to Planet 4546B, an alien world covered almost entirely in water.

Upon landing, your character discovers a new icy region on its surface and sets out to uncover all of its mysteries while harnessing natural resources to craft and expand bases, submersibles, and tools.

Much like the original, Below Zero has a fairly open-ended structure that lets you set your own goals as you explore the deepest corners of the ocean and encounter an assortment of alien wildlife.

Easily the most slept-on immersive sim to come out of Arkane Studios, Prey sees you taking on the role of a science researcher aboard a space station overrun with hostile aliens.

Throughout the game’s branching story, you’ll encounter various species of Typhon, ranging from shape-shifting Mimics to warping Phantoms and more.

Learning how to deal with each one is crucial for unlocking new areas, saving other survivors, and making it out of the Talos I station alive.

As far as first-person shooters are concerned, Halo is surprisingly detailed in regards to its world, characters, and story revolving around a conflict between human civilization and an alien empire.

The Covenant is comprised of several alien species including the Unggoy, Kig-Yar, and San’Shyuum, each of which features distinct physical and personality traits that factor into their tactics.

The best way to experience the Halo saga in its entirety today is through the Halo: The Master Chief Collection, which features high-res monitor support, improved matchmaking, and LAN multiplayer.

Destroy All Humans! takes a unique approach to aliens by depicting them as little grey men with mouths full of sharp teeth and a sprinkling of sarcastic wit.

The series sees you taking on the role of Furon Cryptosporidium, aka Crypto, an alien soldier assigned to infiltrate planet Earth and harvest its inhabitants’ DNA to ensure his species’ survival.

To get the job done, Crypto is equipped with an arsenal of alien weaponry that allows him to read minds, shapeshift, disintegrate flesh, and even probe unassuming Earthlings whenever he so desires.

In it, you take on the role of The Stranger, a blank slate of a character destined to decide the fate of the Halcyon Space Colony and its starving citizens.

Your journey sees you trekking across a solar system comprised of eight planets with unique settings, alien creatures, and challenges that can be tackled in a variety of ways.

Journey to the Savage Planet

Next up we have Journey to the Savage Planet, another comedic first-person adventure game that sees you exploring the colorful alien planet ARY-26 to determine whether it’s fit for human colonization.

While exploring ARY-26, you’ll encounter a host of alien lifeforms with weird behaviors and quirks that affect how they react to the player, environment, and other creatures.

It’s a very experiment-driven game, allowing you to combine different weapons, consumables, and items to trigger unique responses from the local wildlife.

One of the rare games to focus entirely on aliens, Outer Wilds casts you as a new recruit for a space program looking to expand its knowledge of the galaxy and its ancestors’ mysterious disappearance.

The story tackles numerous sci-fi tropes such as black holes, antimatter, and most notably time travel, with your character trapped in a perpetual 22-minute time loop.

This is further complemented by a densely packed open world consisting of hand-crafted, explorable planets belonging to different alien races with interesting backstories.

If you fancy yourself something of a strategy or tactics fan, then there’s a good chance you’ve played Into the Breach or its predecessor FTL: Faster than Light, both developed by Subset Games.

Presented as a compact roguelike game, it sees you defending planet Earth from an army of alien monsters resembling arthropods known collectively as the Vek.

Gameplay revolves around tactical turn-based battles using soldier-operated mechs that can be armed and outfitted with a variety of weapons and armor.

Much like other automation-driven games like Factorio, Satisfactory sees you venturing to an alien planet brimming with exotic wildlife and resources.

While the gameplay is less focused on combat and survival than many of the games on this list, there’s a good amount of diversity to Satisfactory’s aliens and how you interact with them.

If there’s one thing Earth Defense Force has going for it, it’s aliens; massive, never-ending hordes of creepy-crawly bug invaders that come in all shapes and sizes.

And while each EDF installment is equally bizarre in its own way, the most recent Earth Defense Force 5 introduces several refinements and quality of life improvements.

Gameplay sees you mowing down mobs of enemies using a host of weapons and equipment, including overpowered mechs, in large-scale battles that only get better and more chaotic with friends.

Arguably the cutest addition to this list, the slimes in Slime Rancher are sure to melt your heart, at least until you discover what happens when you cram too many of them in the same area.

In it, you play as a plucky young rancher a thousand light-years away from Earth on the ‘Far, Far Range’ where you’ll try your hand at making a living wrangling slimes.

Gameplay centers on catching slimes, bringing them back to your ranch, and feeding them various foods to create Plorts, the game’s main currency and method for unlocking new upgrades.

From panned by critics to critically acclaimed, No Man’s Sky is one of the best video game redemption stories we have and a great example for developers on how to make good on a less-than-stellar product.

Over the years, developer Hello Games has added several player-requested features such as base-building, crossplay, and mod support, resulting in an uptick of players and a greater sense of community.

Other refinements such as improved procedural generation and broader mission selection allow for more varied gameplay and alien encounters.

Our second Alien franchise recommendation is Alien: Isolation, a survival horror game about an engineer investigating her mother’s disappearance aboard a sprawling space station.

Of course, since this is Alien, things inevitably take a turn for the worse and the station goes on lockdown after a deadly Xenomorph climbs onboard.

In order to make it out alive, you’ll have to scavenge for supplies, stealth your way around the station, and when all else fails, torch the place.

Although Civilization is often touted as the premiere historically-based 4X strategy game, Beyond Earth takes the franchise in a new direction rooted in science fiction.

The game takes place in a dystopian future where developed nations have begun focusing their resources on deep space travel and colonization.

You play as one of eight factions tasked with colonizing an alien world and unlocking new technology in the face of dangerous terrain, mystical resources, and hostile extraterrestrial life forms.

If you enjoy Beyond Earth and other sci-fi-themed 4X strategy games, then Amplitude Studio’s Endless Space series checks all those boxes plus aliens for good measure.

Similar to Civilization, the beginning of each game sees you picking a nation to guide into the future, including both human and alien factions with different affinities that favor certain playstyles.

The first game features diplomatic Amoeba and living crystals called the Harmony, while Endless Space 2 introduces a race of living weapons called the Cravers along with the ever-curious Sophons.

Stellaris is a space-themed grand strategy game that comes from Paradox Interactive and focuses on building up a space-faring civilization.

The game gives you the freedom to design your own alien species, including their visual appearance as well as political systems, with plenty of options to pick from.

As you make your way around the galaxy, you’ll frequently encounter other alien races that can be made allies or become sworn enemies.

Another sequel to a popular franchise brimming with alien life forms is XCOM 2, a turn-based tactics game and follow-up to the popular series’ reboot XCOM: Enemy Unknown.

Set twenty years in the future, it has you leading a small squad of soldiers into battle against alien invaders with advanced technology and weapons.

The aliens pose a significant threat due to their sophisticated tech and tactics but can ultimately be bested with the right gear and coordination.

Elite Dangerous is a space dogfighting shooter set in the 34th century where humanity’s reach has extended beyond our galaxy to distant star systems.

These creatures have had territory disputes with humans throughout the series’ and Elite Dangerous sees them gearing up for another attack that the player must deal with accordingly. 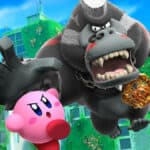