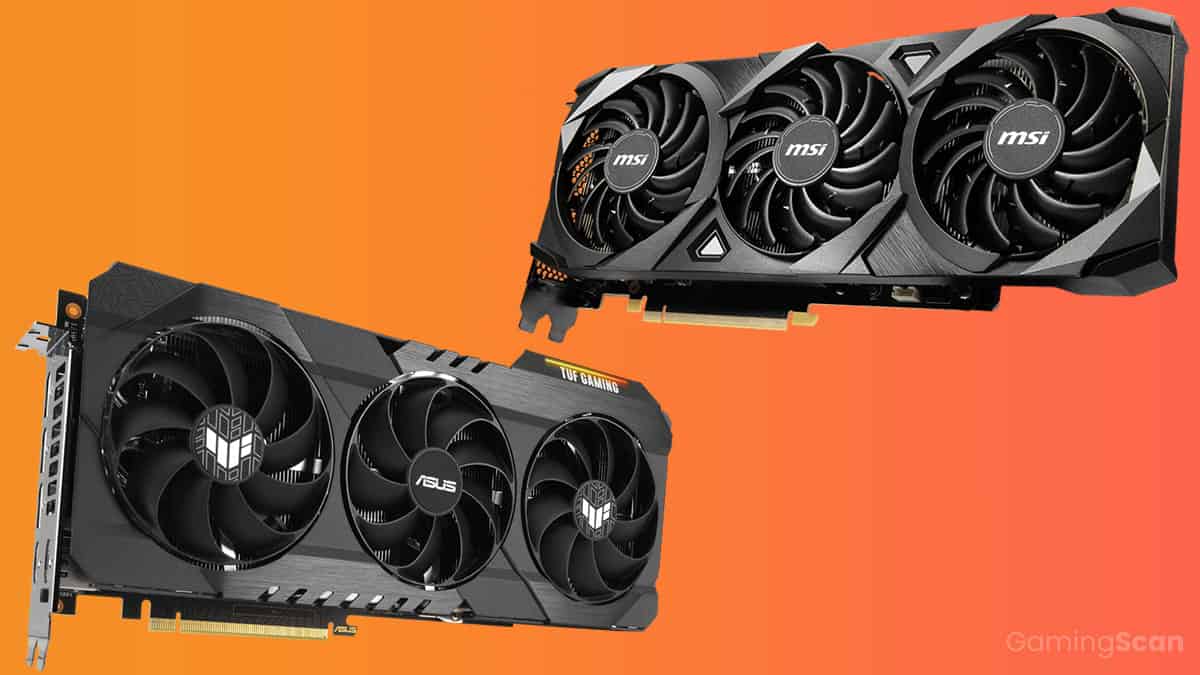 It didn’t take long after the release of Nvidia’s 3000-series RTX GPUs for the fans to start lining up, eager to get their hands on some powerful new hardware for some long-awaited PC upgrades.

Now, the question of value is one that rears its head time and time again, and it’s one where Nvidia hasn’t exactly fared all that well in the past.

However, that’s most definitely not the case with the new Nvidia GeForce RTX 3070!

With an MSRP of $500, this GPU costs just as much as the RTX 2070 Super did, while generally outperforming it by a margin of almost 40%, which puts it in the same performance category as the significantly pricier RTX 2080 Ti.

Without further ado, let’s take a look at some of the best RTX 3070 models currently available! 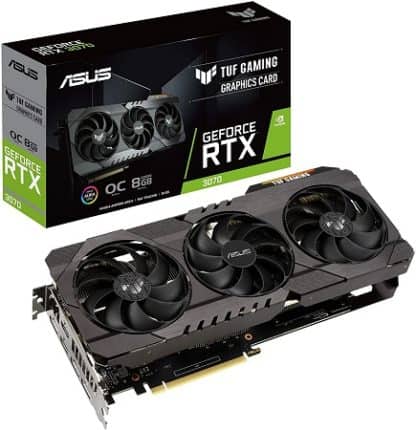 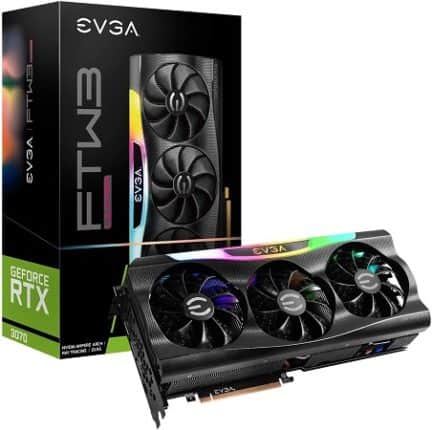 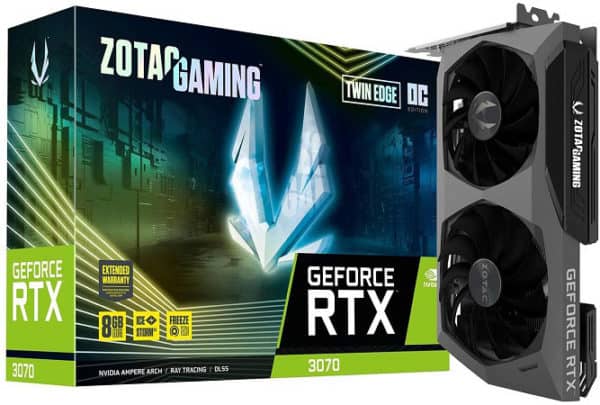 The first card on our list is nothing to scoff at, even though it may appear a bit diminutive compared to the other models listed here. Over the years, ZOTAC has delivered some of the best compact graphics cards that you could buy, and the RTX 3070 Twin Edge OC is no exception.

With this card, ZOTAC has introduced a bit of a redesign, featuring a simple gray backplate and shroud with very little detail, making it quite low-profile and thus complementing the card’s compact frame. However, it may not be to everyone’s liking since it can come across as somewhat bland due to the aforementioned lack of detail.

On the practical side of things, the card has good cooling, and that’s always important with smaller graphics cards. Though it may be equipped with only two fans and a relatively small heatsink, the card runs at fairly low temperatures and overheating won’t be an issue.

The only problems are the noise generation and the limited overclocking potential, as the performance is less than ideal in both departments. Namely, the fans get a bit louder when the GPU is under heavy load, plus there isn’t much overclocking headroom to speak of, both due to the more limited cooling and the power limit.

In any case, this RTX 3070 model from ZOTAC is a great pick for those who don’t want to spend extra on a new graphics card (although it is a bit more expensive than the MSRP at $520) and those who are looking to build a compact gaming PC.

However, if you don’t fall into either of those categories, chances are some of the following picks will be a better fit for your needs.

Moving on, we get to Asus, another highly reliable manufacturer known primarily for their ROG brand of gaming components and peripherals. However, the card that we have lined up here today belongs to their TUF series that dials down the RGB and puts an accent on value instead.

That said, the Asus TUF RTX 3070 OC Edition features a simple but effective exterior. The shroud has a brushed metal texture and some details, plus some RGB in the form of a strip and the TUF logo on the side, giving it a bit of gaming flair.

Now, as mentioned above, value is what TUF products are designed for, and it’s in that area that this card delivers everything it’s supposed to. It boasts great cooling that is not only efficient and keeps the card running at low temperatures, but the fans are also remarkably quiet, even when the GPU is under heavy load.

Sadly, though, this particular model still doesn’t offer much in terms of overclocking, and this is mainly due to the power limit that is still relatively low, increased only to 240W up from the reference card’s 220W.

Regardless, this TUF card performs admirably and is bound to be the best pick for those who want to get good value for their money but who don’t care much about overclocking.

So, if you’re happy with what you get in the box and don’t really enjoy tweaking GPU settings or trying to squeeze as much performance out of it as you can, this is the right product for you. 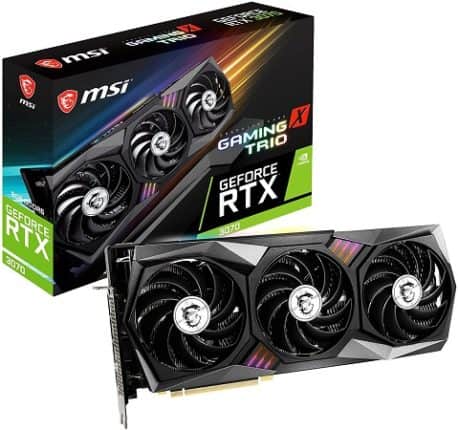 For those with slightly deeper pockets who are willing and able to go above the MSRP if it means getting a higher-quality card, this card is a great choice. The MSI RTX 3070 Gaming X Trio brings performance and aesthetics together in one package, so it’s bound to appeal to those who care about both the FPS counter and the appearance of the card itself.

For this generation of GPUs, MSI revamped the Gaming X Trio design a bit, toning down the RGB and tweaking the shroud design slightly. Even though we preferred the design seen with the RTX 2000 models, there’s no denying that the new one still looks great.

As far as performance is concerned, MSI doesn’t disappoint. The triple Torx 4.0 fans are remarkably quiet and do a great job at keeping the card cool. It also fares well when it comes to overclocking, but the power limit still holds it back, much like the previous TUF model.

All in all, as mentioned above, this is a great card for those who want to have both performance and aesthetics without going way over the MSRP. At $560, though, the Gaming X Trio is already a bit pricey compared to some other RTX 3070 models out there.

Now we get to a real heavy hitter coming from one of Nvidia fans’ favored manufacturers — the EVGA RTX 3070 FTW3 Ultra.

With the new shroud design and the heavy RGB implementation, the FTW3 Ultra looks absolutely amazing and is, without a doubt, the kind of card that most gamers would like to display proudly in a translucent case. Of course, some might simply find this card to be a bit “too much,” but that’s a matter of taste.

Now, as you might have guessed, this card definitely isn’t all about the looks. It delivers great performance, particularly when it comes to overclocking, as the increased power limit allows the GPU to reach clock speeds higher than those that any of the other cards listed here can manage.

Sadly, though, as the saying goes, you can’t have your cake and eat it, too. In the case of the EVGA RTX 3070 FTW3 Ultra, you can, but you’ll have to pay handsomely for it. At $610, this card is way above the $500 MSRP and the boost in in-game performance that it offers is largely negligible, so it hardly justifies such a steep price increase for the average gamer.

Ultimately, though, if you have the money to spare and you’re after a card that fares better when it comes to overclocking or you just want a card that looks better than some of the more affordable models, you likely won’t regret getting the EVGA RTX 3070 FTW3 Ultra.

If that’s not the case, one of the previous cards could easily offer better value for your money.

So, we have gone over some of the best RTX 3070 models currently available, but the question remains: which one should you get?

Well, obviously, the answer will depend on your budget and preferences.

If you want to get good value for your money, get the Asus TUF RTX 3070 OC Edition — it’s the obvious pick. Sure, it’s priced a bit higher than the MSRP, but the enhanced cooling and performance more than justify it, so you’d definitely be getting your money’s worth if you were to pick this card.

On the other hand, if you want premium and are willing to pay for it, there’s the EVGA RTX 3070 FTW3 Ultra, which comes with the highest power limit of any RTX 3070 released to date. It also performs better when overclocked, and its RGB is downright stunning. It’s a clear pick for enthusiasts who have extra cash to spend.

Of course, these are only our picks, and any of the cards listed here are bound to be a good fit for your needs, based on what you’re looking for.

Also, keep in mind that we refresh our buying guides every so often as new products are released, so if you don’t get your RTX 3070 now, be sure to check back later in case we add some new, even better options! 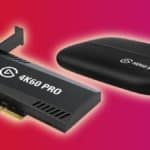