Home » Mice » Laser vs Optical Mouse – Which Is Better For Gaming?

Laser vs Optical Mouse – Which Is Better For Gaming?

A laser mouse is more sensitive and can be used on any type of surface, even transparent ones. An optical mouse is generally more accurate and such mice tend to be much more cost-effective.

Long gone are the days of trackball mice, and gamers today have to choose between laser and optical technology. However, choosing between two options often proves to be more difficult than choosing from among several of them.

In this article, we will look at how these two types of mice work, their capabilities, and ultimately, which is better for gaming. 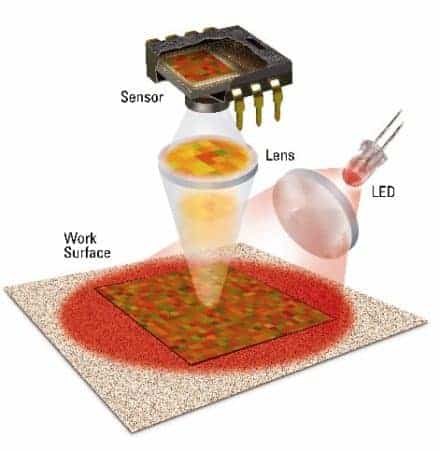 Both optical and laser mice rely on a CMOS sensor to analyze the surface they are placed on and determine the extent and speed of the movement by taking thousands of digital images per second.

What differs is the means by which they illuminate the said surface. Namely, an optical mouse uses a LED light while a laser mouse uses just what the name states: a laser. So, what are the advantages and disadvantages of each?

A mouse’s sensitivity is measured in dots per inch, commonly abbreviated and referred to as DPI. This stat used to be much more important in the past when the DPI gap between optical and laser mice was more significant. Today, however, even budget gaming mice can have a DPI of over 1000.

Another reason as to why DPI ratings are less important today is the technological advancements when it comes to the CMOS sensors which are now so advanced that even three-digit DPI mice can achieve great precision.

A more important aspect to consider is how accurately a mouse is able to analyze the surface it is on, and this is where the differences between a LED light and a laser are more noticeable.

Lasers are accurate. Too accurate. Unlike a LED light, which cannot penetrate the surface it is placed on, a laser can. Because of that, it can analyze the data in much more detail. This is something of a double-edged sword, as it can also lead to the laser mouse over-analyzing the surface during slow movements and leading to unwanted jitter.

On the other hand, laser mice can work on almost any surface, while optical mice cannot. Due to the fact that an optical mouse is using light for illumination, it needs to be placed on a non-reflective surface in order to be accurate. If used on anything overly glossy or prone to reflecting light, it will end up being inaccurate and borderline unusable.

The pricing is another factor that used to be much more important in the past. Years ago, optical mice were the budget gaming solution and laser mice were high-end. This gap is almost non-existent today.

Simply go ahead and check on Amazon. You will find both optical and laser mice starting at a handful of dollars and going as high as several hundred. Higher-priced mice tend to be slightly more advanced, equipped with additional buttons and aesthetic lighting, but a high price does not necessitate better performance.

Generally, it is best to stick to the 30-90$ price range for the best experience. Anything lower and you risk a lower-quality mouse in terms of build and performance, and anything higher is mostly just a marketing gimmick.

All things considered, we have to go with optical mice on this one. They have proven to be more responsive and more reliable than laser mice, which is extremely important for gaming. The only downside is that you will need a mouse pad to ensure that the mouse works optimally, although this is hardly a problem unless you move around a lot.

Now, this is exactly where one of the main advantages of a laser mouse lies: it can work on almost any surface, even glass. This makes them a better portable solution, although their tendency to over-analyze the mouse movements, especially slower ones, makes them less than ideal for gaming.

Furthermore, they do have higher DPIs, but as stated above, this is not as important anymore as it used to be.

And lastly, another dilemma you might be facing is whether to go with a wired or wireless gaming mouse, which is a topic we have already discussed here. Furthermore,  if you have decided on getting an optical mouse, you should definitely check our list of the best mouse pads available right now.