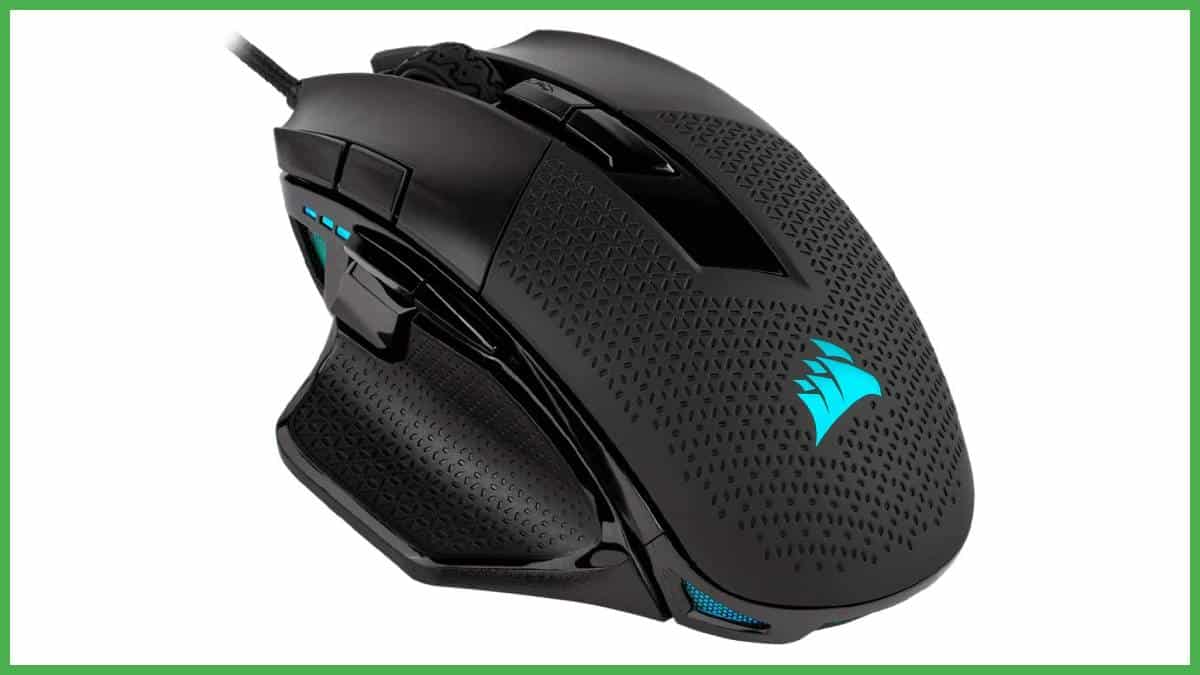 The Corsair Nightsword RGB is an excellent gaming mouse with a few shortcomings.

It is definitely worth the price mark for most people and it is very accurate as well.

If Corsair’s Nightsword RGB looks familiar, it’s because it does – and it should, as that seems to be the point.

It’s hard to discern where exactly Corsair is aiming with the Nightsword RGB, a mouse that takes obvious design cues from the likes of Corsair’s own Glaive RGB and Dark Core, while also borrowing elements from the M65 lineup.

Without the Dark Core, the Nightsword RGB wouldn’t be able to benefit from the high profile, bulbous shape, and uniquely textured grip.

Similarly, we can equally thank the Dark Core RGB and Glaive RGB for the familiar thumb rest jaunting out from the left side of the Nightsword RGB. And the tunable weight system? This feature is synonymous with the distinguished M65 series.

Indeed, Corsair’s past mice have seemingly led to here, an amalgamation of some of the company’s most influential design choices, assimilated into one peripheral.

The headlining feature for the Nightsword RGB is the adjustable weight system that automatically detects its center of gravity once the weight has been added or removed.

With that, Corsair is portraying the Nightsword RGB as one for those wanting to tune the weight of the mouse, but with more granularity than before. While the Nightsword RGB falls a bit short of being the perfect gaming mouse for control freaks, there’s still a lot to love.

We’ll look at how well the new weight system works, as well as build quality, performance, and price.

Aside from the standard black and yellow color scheme, Corsair seems to have added some new text on the side of the box that reads “Control Freak.”

This isn’t exclusive to the Nightsword RGB, but seems extended to all of Corsair’s gaming mice that feature some amount of customizability, targeting self-identifying control freaks.

Within the box are the documentation for the mouse, a separate case that contains the weights, and the mouse itself. A standard unboxing experience from Corsair.

The Corsair Nightsword RGB is a right-handed mouse, measuring 5.1 x 3.4 x 1.7 inches. The rodent features a rather lengthy, rotund shape, accentuated by a high median arch in the body of the mouse.

The Nightsword RGB uses several curves and concaves to both facilitate a palm grip and help the hand fall into a more relaxed position.

The textured thumb rest protruding out from the left side of the mouse means the Nightsword RGB is unquestionably for right-handed users – sorry, lefties.

This mouse is also for those who prefer an inherently heavy gaming mouse, as the Nightsword RGB weighs in at 119g at its lightest. Alternatively, with all six weights added, it weighs 141g.

I would’ve liked if Corsair had shaved a few grams off the bottom end here, giving users a broader range of control.

I had the exact opposite experience with Corsair’s M65 RGB Elite, in that it offers a svelte 97g with no weights added, but found it lacking at the top end with only 116g to push around.

To put that into perspective, the Nightsword’s stock weight is already heavier than the M65 RGB Elite’s heaviest configuration.

So, fair warning: if you’re looking for a light mouse, this isn’t the one.

That said, comfort and ergonomics take top billing with the Nightsword RGB. The concave shape and extra width of the mouse, as well as the thumb rest, enable a comfortable palm grip, especially for those with larger hands.

The matte black finish and textured coating on the mouse work well in this respect, too, maximizing grip while minimizing slipping.

The Nightsword RGB boasts an impressive ten programmable buttons, which should satisfy all but the most macro-heavy users. You have the usual left and right mouse buttons, with the clickable scroll wheel fixed between them.

The main mouse buttons use the industry-standard Omron switches, which feel and actuate perfectly. Additionally, there’s a pair of buttons sitting behind the scroll wheel. By default, these are used to cycle through mouse profiles.

The button layout gets more interesting on the left side of the Nightsword RGB; however, it also gets a little crowded as well. Immediately flanking left mouse button are two more small buttons, serving as the DPI selectors by default.

Throughout my testing of the Nightsword RGB, this button layout led to several frustrating and inadvertent clicks of the DPI selectors. For this reason, I’m not a proponent of buttons in immediate proximity to the main LM and RM buttons.

Due to the size of the mouse – and likely the size of my hands – I found the sniper button a bit hard to reach with my thumb. I wouldn’t expect this to be an issue for those with bigger hands.

The Nightsword RGB also features multiple RGB illumination zones, including the usual scroll wheel and palm rest area, in addition to front and rear zones that give the mouse a nice under-glow effect.

Also, RGB lighting extends to the three small strips on the left side of the mouse, just below the DPI buttons. These strips indicate which DPI setting is selected, and change color when the sniper button is pressed.

As with past Corsair mice, the build quality on the Nightsword RGB is excellent. If feels sturdy, premium, and glides across the mousepad with ease.

Corsair has unsurprisingly endowed the Nightsword RGB with the PixArt PMW 3391 optical sensor, a sensor that is both exclusive to Corsair and found in Corsair’s previous high-end mice such as the M65 RGB Elite and Glaive RGB Pro.

As I’ve found in my previous experience with the PMW 3391 sensor, it’s a very reliable and responsive sensor. There’s no intrinsic acceleration or angle snapping, or anything else that affects raw sensor performance.

In testing the Nightsword RGB, I played Destiny 2 to gauge how fast and responsive it was. Expectedly, it performed admirably in a fast-paced FPS environment.

I also played The Division 2, and the mouse performed equally as well. Again, I had trouble with comfortably and quickly reaching the sniper button to scope rifles in both games. However, mileage will vary depending on hand size and dexterity.

I also played Final Fantasy XIV and Divinity Original Sin II, and the Nightsword RGB is just as suitable for RPGs as it is for FPS or MOBA titles.

Throughout my testing, I adjusted the weight several times. If you’re a user who prefers a lighter or heavier mouse depending on the game being played, then the tunable weight system is a valuable feature, albeit kind of a tedious one.

Adding and subtracting the weights can be finicky, so be prepared for that. If you’re a set it and forget it kind of person, then it’s of little consequence.

Like most of Corsair’s peripherals, the Nightsword RGB is controllable via iCUE, which unfortunately remains an intricate system of convoluted menus, and tends to be bloated. Still, Corsair gets points for functionality, and the amount of customization options iCUE encompasses.

Once in iCUE, you can set DPI levels to your preferred sensitivity, create profiles, and assign macros or reprogram buttons. Also, you should begin a surface calibration, which helps the mouse acclimate to whatever surface you’ll be pushing it around on, ultimately improving response, tracking, and aim.

Of course, there’s an array of RGB lighting to play with, of which the Nightsword RGB executes well.

Finally, and perhaps most importantly regarding the Nightsword RGB, is the tunable weight system. It has its menu within iCUE, displaying how many weights are currently being detected, its total mass, and the center of mass across an X, Y, and Z-axis – all in real-time.

While this level of functionality is impressive, I’m not sure as to what tangible benefit it nets the user.

Corsair has become an entrenched player in the mice arena, and the company’s proliferation also means that Corsair’s biggest competition might be Corsair. That seems to be the case with the Nightsword RGB, a mouse design that’s very familiar if running the risk of being a bit derivative.

Corsair’s Nightsword RGB admirably takes inspiration from the company’s past flagships, pulling in features almost a la carte to offer a mouse that’s greater in a whole than the sum of its parts.

And while this approach mostly works, I can’t say the Nightsword RGB pulls them off as well as its siblings. The adjustable weight system is a nice touch, and it’s arguably better than Corsair’s previous efforts, but stops just short of being flawless.

The large thumb rest is also nice, but it won’t be for everyone, and it also lacks the modularity that made the Glaive RGB so great. I also found Corsair’s crowded button layout on the Nightsword RGB a bit annoying.

That’s not to say that the Nightsword RGB isn’t a great mouse. I simply have a hard time recommending it over Corsair’s own Glaive RGB or M65 RGB Elite.

The Nightsword RGB currently carries a $20 premium over both of those, and whether you opt to spend that will likely depend on if you’re a right-handed gamer with larger hands, looking for one of the heaviest mice Corsair has ever offered.

That said, if you like what Corsair is selling with the Nightsword RGB, you can be assured it is among Corsair’s most comfortable mice to date, and the build quality is exquisite.

The Nightsword RGB also offers an outstanding and responsive gaming experience, no matter what your preferred games are. 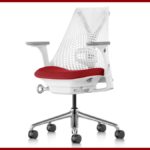