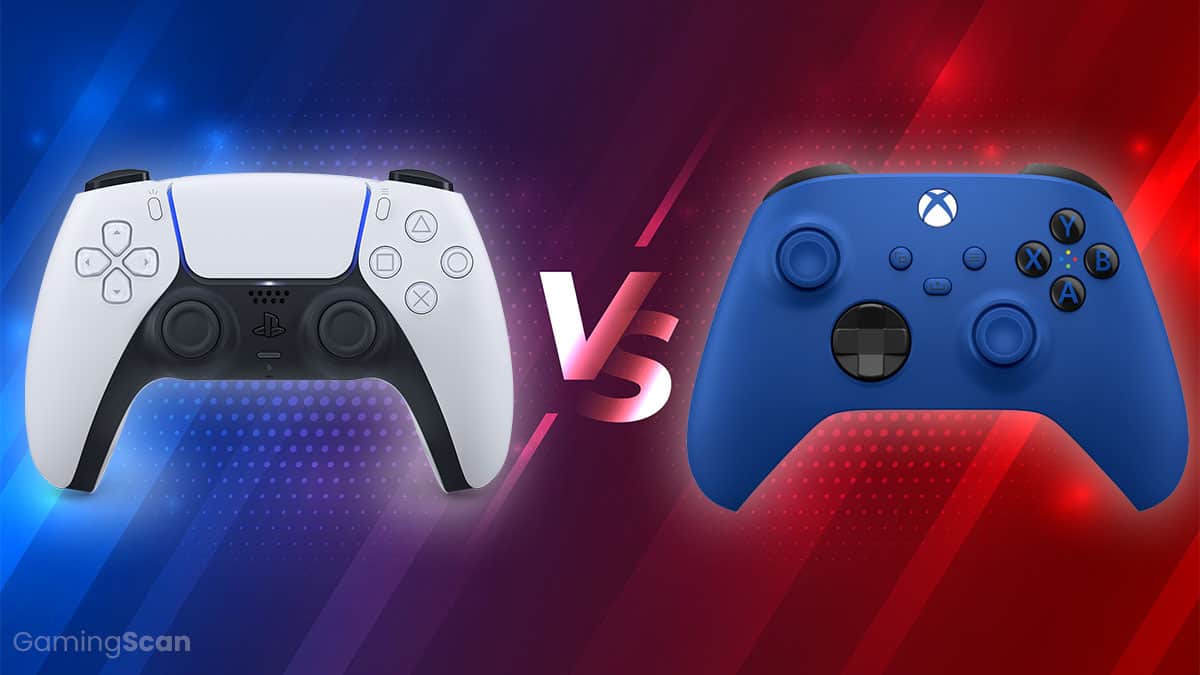 The next generation of consoles is less than a year away, so as you can imagine, the comparations between the upcoming PlayStation 5 and the Xbox Series X are already starting to overflood the internet. Hardware specs, exclusive games, and backward compatibility have all been the subject of much discussion, among other things.

However, in this article, we will be focusing specifically on the controllers. Both the Xbox Series X and the PlayStation 5 controllers have been unveiled, so we figured it was time for a preview of the two.

Unsurprisingly, Microsoft stuck with a familiar design philosophy when making their new controller. There are a few minor changes, but the controller is mostly the same as the one that shipped with the Xbox One, and the two are almost indistinguishable at first glance.

The first thing that you may notice is the D-pad, which has been a bit of a challenge for Xbox controllers in the past. The Series X controller’s D-pad now has a concave dish design, similar to the standard D-pad cap on the Xbox One Elite controller. This will allow for more accurate diagonal input, something that’s bound to make the new D-pad better for platformers and fighting games.

Moreover, the triggers were redesigned to be even more ergonomic and tactile, and ergonomics seem to have generally been the key factor when designing the new controller. It has been redesigned to be less bulky and, as Ryan Whitaker said in an interview, accommodate the hands of the average 8-year-old, which should make the controller more comfortable for a wider audience.

Many fans liked the weight and the bulk of the Xbox One controller as they felt that it made it more comfortable to hold and use for longer periods. Still, some found it to be too large, so we hope that Microsoft manages to strike a proper balance with the new Series X controller and appease both camps.

There’s also a minor but important change that can be seen on the front of the controller – you’ll notice that Microsoft finally added a Share button, something that will allow the player to capture screenshots or videos without dealing with on-screen menus easily.

Finally, the new controller has a USB-C port on the back, which will be used for wired connectivity and charging, provided that the user gets a rechargeable battery, as the new controller will ship with disposable AA batteries, much like its predecessor.

All in all, the Xbox Series X controller is a tweaked and refined version of the Xbox One controller that the fans know and love. Some were quick to point out that it doesn’t make any major new changes to distinguish itself from the previous-generation controller, but it seems that Microsoft went with an “if it’s not broken, don’t fix it” philosophy this time around.

Much to our (and many other people’s) surprise, Sony has rebranded their PlayStation controller. However, in retrospect, we probably should have anticipated it.

Sony’s DualShock series of controllers goes back to the first PlayStation, and the series’ name comes from the new feature that wasn’t present in the PlayStation controllers that came before it – rumble.

Now that Sony is replacing the traditional rumble with more accurate haptic feedback, it made sense (no pun intended) to slap a fresh, marketable new name on the new controller, and so we have the PlayStation DualSense instead of the DualShock 5.

The haptic feedback is the most drastic step forward for the DualSense, as it promises to improve the gaming experience with its precise tactile feedback greatly. However, it remains to be seen whether developers will make the most of this new characteristic. In the past, many of the major new features introduced in Sony’s controllers ended up feeling more like gimmicks that were only really experimented with by first-party developers, and we hope that that won’t be the case this time around.

Other notable features include adaptive triggers, a built-in microphone that will allow players to communicate even without a headset, and the Share button is to be replaced by the Create button. Sony didn’t say much about the functionality of this new button yet, but judging by the name, it’s safe to assume that it will also allow the player to edit their screenshots and gameplay footage quickly and easily, in addition to just capturing them.

Now, the redesign is probably the most striking aspect of the DualSense. The two-toned black and white design isn’t something that we’re used to seeing in standard console controllers, and we can’t help but feel that the DualSense looks a lot like an aftermarket DualShock 4. So, as you might expect, the response has been mixed. Some seem to love it, others seem to hate it, but few people seem to be indifferent to the change.

As you can tell, we aren’t big fans of the new design, and it’s not that we’re necessarily opposed to the two-tone aesthetic, it’s just that the implementation feels a bit “off,” as the matte black seems to clash with the white instead of complementing it.

Perhaps the controller would have worked better with a slightly different design i.e., either if the black and white areas were more evenly balanced or if one was more dominant than the other. In any case, this is ultimately a highly subjective matter. Maybe we just need time to get used to it.

Apart from that, the DualSense is also noticeably bulkier than the DualShock 4, as Sony is also going for a more ergonomic design, leading to the overall shape of the controller being heavily reminiscent of that of the Xbox controller. Who knows, maybe Sony wanted to make the DualSense more distinguishable from the new Xbox controller, and that led to the new two-tone design.

In any case, the new DualSense is shaping up to be a good, feature-rich controller that will have a couple of advantages over the competition, but it remains to be seen how either of them will feel in practice.

Now that we have briefly gone over both of the new controllers, it’s time to compare their pros and cons based on what we know so far.

On the design front, things are always going to be pretty subjective, but the Xbox and the PlayStation controllers have never been more similar than they are now.

Sure, the two-tone design of the DualSense might mask this, but when you look at the shape and the size of the two controllers, they look quite similar and are abound to feel similar, too. It remains to be seen as to how large and how heavy either controller will be, but given what we know so far, they are both aiming to be more ergonomic and lightweight.

As for the colors, well, while the Xbox Series X controller looks almost identical to its predecessor, it boasts a very practical design, so there was little that they could change in that department. They’re fixing things that need fixing (e.g., the D-pad) and are not fixing the stuff that doesn’t need fixing.

When it comes to the DualSense, as mentioned above, we aren’t big fans of the new design, mainly because we feel that the particular balance of the black and white areas just doesn’t look that good. So, unless Sony changes the final design (which is unlikely) or offers all-white and all-black options, we’d say that the new Xbox controller is the better-looking of the two.

As far as input is concerned, there isn’t much to say about the analog sticks, the shoulder buttons, or the face buttons, as the biggest changes have to do with the triggers and the D-pad this time around.

As for the D-pad, we’ve noted before that the tactile, clicky cross-shaped D-pad of the Xbox One controller wasn’t that great for platforming and fighting games in our experience, and that the DualShock 4 D-pad usually felt much better for such games. The new concave D-pad on the Xbox Series X controller should help fix the issue mentioned above, but again, we’d have to compare the two controllers first-hand before making any judgments.

A notable feature that was missing from the previous-generation Xbox controller was the gyroscope, and Microsoft hasn’t yet confirmed as to whether the new controller will have one, so there’s a good chance that it will be shipping without this sensor.

This is quite disappointing, seeing as the DualShock 4 had it, and now the DualSense will also have it. A gyroscope allows for more precise camera movement comparable to the kind of precision that you can get with a mouse, which makes it good to have in shooting games or if you want to use the controller on the PC.

The DualShock 4 came with a built-in speaker, and now the DualSense comes with a full set – a speaker and a microphone!

Granted, said the speaker was hardly a major feature in the DualShock 4, as few developers really made use of it when designing their games. However, with the microphone, the DualSense should make multiplayer communication a bit easier, as everyone will be able to voice chat without using a headset.

Moreover, a built-in microphone means that voice controls will also be more convenient, as you won’t need to have your headset plugged in or get a PS Camera to use them. Sadly, the Xbox Series X controller lacks this functionality, and though it’s not a major feature by any means, it’s still convenient to have.

Much like their respective predecessors, the DualSense will have a built-in battery. In contrast, the Xbox Series X controller will have user-replaceable batteries, allowing the user to choose whether to use disposable or rechargeable batteries to power the controller.

Obviously, being able to easily replace the controller’s batteries yourself is a definite plus, seeing as all batteries inevitably degrade over time. However, this also means that you’ll have to spend a little bit extra if you want to get a quality rechargeable battery for the Xbox Series X controller, as it will come with disposable AA batteries like its predecessor.

Ultimately, both controllers seem to have all the vital areas covered. We feel that the Xbox Series X controller is better-looking and will likely be more ergonomic overall, though the DualSense does have a couple of noteworthy extra features.

Most notably, the DualSense will likely have better haptic feedback, a gyroscope, and a built-in microphone that some will undoubtedly find useful, although it is not a major addition by any means. The rest of the stuff, such as the speaker, the touchpad, and the light bar are all minor features that mostly feel like gimmicks and we expect that first-party developers will be the only ones to make any real use of them, as was the case with the DualShock 4.

In any case, both are bound to be very good controllers and we can’t wait for the next generation of consoles to roll out so that we can try them out.

In the meantime, tell us what you think. Did Microsoft make a mistake by not adding a gyro sensor? Should Sony rethink their design or at least offer some alternatives? Leave your comments below! 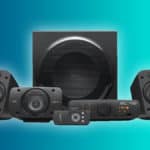