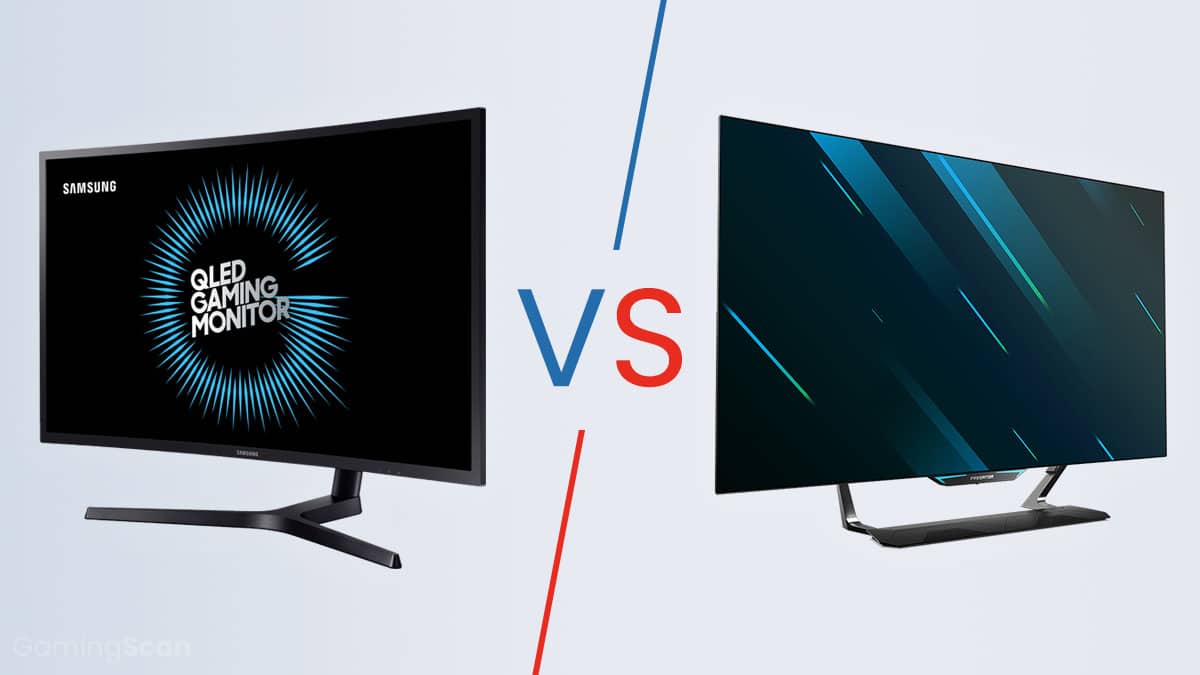 Choose QLED if you want a more affordable OLED alternative with high brightness, great color reproduction and no risk of permanent burn-in.

OLED will give you the best possible contrast, excellent color accuracy, viewing angles, and the fastest response time.

New technologies seem to be popping into the market almost constantly these days, and those who aren’t keeping up with the latest trends almost always end up finding themselves buried in a bunch of new, confusing acronyms.

If you’re shopping for a new TV or monitor in 2022, chances are that some of the newer technologies, such as QLED and OLED, will have that effect on you.

At first glance, these two technologies may seem closely related, but that’s not exactly the case.

In this guide, we’ll briefly go over what QLED and OLED are before taking a closer look at how they compare to one another in multiple departments.

By the end of the guide, you’ll certainly have a better idea as to which of these two technologies is a better fit for your needs. Let’s dive right into it.

What Are OLED & QLED?

Let’s start with the basics – what is OLED and what is QLED?

OLED, short for Organic Light-Emitting Diode, is a display technology that, unlike regular LCD displays, doesn’t use any form of LED backlight. Instead, every single pixel on the display lights up on its own and functions as its own light source.

As for QLED, it’s short for Quantum Light-Emitting Diode, and it’s a type of LED-backlit LCD display that uses “quantum dots” to enhance the brightness and color vibrancy of the image. That said, it is pretty much the same thing as any other LCD TV with an LED backlight, albeit with improved color reproduction.

That said, comparing QLED and OLED is mostly like comparing LCD LED and OLED, and we’ll go over the main ones below.

As mentioned above, OLEDs don’t use any form of backlight, while QLED displays do. So, as you might imagine, QLED displays can achieve much higher levels of brightness. This can reflect positively on your viewing experience if you mainly watch TV in a brightly lit room.

On the other hand, while OLEDs cannot quite match the sheer brightness of a QLED display, they make up for it with unrivaled contrast. Since OLEDs don’t use an active backlight, they can display true black simply by turning pixels off. This is something that QLED displays can’t do, so OLEDs win in the contrast department.

A notable advantage that OLED displays have compared to most LED-backlit LCD displays is their vibrant and accurate color reproduction. QLED, however, largely bridges that gap — after all, as mentioned above, the main advantage of a quantum dot display is that the colors come across as more vibrant and more saturated.

As always, the exact color accuracy will inevitably vary from display to display. Still, overall, the gap between OLED and QLED isn’t that noticeable, so one isn’t necessarily better than the other in this department.

Speaking of color accuracy, we can’t avoid mentioning viewing angles, too. As you’ve undoubtedly noticed, most LED displays look best when they are viewed from the front. If you view the display at an angle, the colors appear to distort and the image loses its contrast and clarity.

This is something that no display is immune to, although OLED displays do tend to fare much better in this department than QLED ones, as colors usually remain vivid and vibrant even when you view the TV from a sharp angle.

If you’re getting a TV for gaming, chances are performance is also a very important factor for you. This, of course, refers to response times, input lag and refresh rates.

The pixel response time indicates how quickly a pixel can change from one color to another, and it is expressed in milliseconds (ms). Lower response times are better, as higher response times can lead to some distracting motion blur, something that you’d want to avoid, especially when it comes to gaming.

Now, the response times in QLED TVs usually range from 2 to 8 milliseconds, whereas OLED displays are significantly faster, with response times as low as 0.1 milliseconds. That said, there really is no competition between the two technologies in this regard.

Next, there’s input lag, and it is usually even more important than response times when it comes to gaming, as it indicates the delay that occurs between your input and the results of that input being visible on the screen. Obviously, high input lag can simply make games unplayable, but it doesn’t necessarily have to do with the display technology itself.

Rather, the main culprit behind jarring input lag is often the TV’s onboard image processing. This is why most TVs have a “game mode” that disables all of the features that might cause input lag, thus allowing for a much smoother and more enjoyable gaming experience.

Finally, there’s the refresh rate. It is expressed in Hertz (Hz) and it determines the number of frames that the TV/monitor can display each second. So, if we’re talking about a 60 Hz display, it will only be able to display a maximum of 60 FPS.

OLED and QLED TVs are mostly on even terms in this department, too, as there are both 60 Hz and 120 Hz displays out there, albeit the 120 Hz models tend to be a bit more expensive, as you might imagine.

However, one important thing to keep in mind is that some TVs that are marketed as having a 120 Hz or a 240 Hz refresh rate don’t necessarily have a native refresh rate that high. Rather, many of them use various technologies such as LG’s TruMotion or Sony’s MotionFlow that imitate a high refresh rate with the help of various image processing techniques, such as frame interpolation.

This is usually referred to as the effective refresh rate, and while it can make movement in movies and TV shows appear much smoother, it is only made possible with the TV’s onboard processor. As we have mentioned above, input lag is the last thing you want in a game, and these techniques will cause a lot of it.

So, at the end of the day, OLED displays tend to have the upper hand in the performance department, if only slightly, as they have far faster pixel response times that no LCD panel can match.

One of the horror stories that you’ll often hear about OLED displays is the dreaded “burn-in” that no OLED panel is safe from. So, what exactly is burn-in and do QLED displays fare better in this respect?

As we have established previously, each pixel in an OLED display functions as its own light source. However, the individual pixels get worn down with time and they lose luminosity, leading to some portions of the screen appearing noticeably dimmer than others. The pixels that get worn down the fastest are usually those that end up displaying static image elements for long periods of time, like channel logos.

QLED and other LED-backlit LCD displays cannot be affected by burn-in, although both QLED and OLED displays can occasionally suffer from image retention. Image retention is similar to burn-in in some respects, so the two are often mixed up. When a static element is displayed on the screen for long periods of time, the “ghost” of the image will linger even after that image is no longer being displayed, and this is what we refer to as image retention.

However, image retention is only temporary, whereas OLED burn-in is permanent and cannot be fixed once it manifests.

Still, burn-in isn’t as big of an issue as it is sometimes made out to be. Modern OLED displays are quite durable and it would take a very long time for any significant burn-in to manifest as a result of normal everyday use.

After all, it is also fairly easy to lower the risk of burn-in developing by lowering the brightness or simply giving the display a break every once in a while. On top of that, manufacturers often implement features designed specifically to reduce the risk of burn-in, so chances are you will be replacing your OLED TV long before you start noticing any distracting burn-in.

However, QLED is still more reliable in the long run, so it wins in this department.

Now, as you can tell from the article, OLED panels tend to have the upper hand in most respects. However, we now get to the pricing, and the pricing is precisely what’s been keeping OLEDs away from the mainstream for years.

Namely, OLED TVs are prohibitively expensive, and you won’t find a brand-new OLED anywhere close to a triple-digit price tag anywhere. Although this will undoubtedly change at some point in the future, there’s no denying that QLED TVs are simply way more affordable right now.

Of course, a cheaper $500 QLED TV won’t really be able to match the more expensive $1000+ QLED or OLED options in terms of image quality, but this still makes QLED displays the more affordable option overall.

As you can see, both of these technologies have their pros and cons, so which of these two is ultimately the better choice? That will mainly come down to your preferences and your budget.

QLED will get you higher brightness, great color reproduction, longer durability without any threat of permanent burn-in, and it can be much more affordable overall.

In turn, OLED offers unmatched contrast, superb color accuracy, great viewing angles, and extremely fast response times, although they are also extremely expensive in 2022, making them the “premium” pick, more suitable for those with deeper pockets. 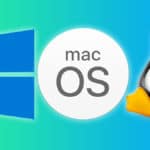 What Is The Best OS For Gaming?
Related Topics Tags