Considering the recent surge in similar-looking 2D games with retro-style pixel art, there’s no shortage of Shovel Knight alternatives to sift through.

In this list, we’ll shine a light on the best games like Shovel Knight to pick up after defeating the Order of No Quarter.

For more retro recommendations, check out our growing library of curated gaming lists, and comment below with your favorite game like Shovel Knight!

Our first recommendation for games like Shovel Knight is the sequel to the fast-paced 2D action platformer Rogue Legacy.

Building off of the original, Rogue Legacy 2 has you traversing hand-drawn dungeons hoarding cash from slain enemies to spend on upgrades for your character.

Where the game sets itself apart is its genealogical progression system, which passes down character traits from one hero to the next.

Beard Blade is a 16-bit platformer inspired by retro classics that has you taking on the role of a man named Branson and his shapeshifting beard.

After a gang of thieves ransacks his farm, Branson tries to recover his stolen livestock and ends up stranded on a strange island.

Environments are littered with collectibles and coins that can be used to unlock new moves and upgrades for Branson and his shapeshifting facial hair.

If you enjoy games like Shovel Knight that harken back to earlier gaming generations, then you’ll surely enjoy Mago by Dream Potion Games.

Billed as a retro 2D platformer, it puts players in control of a sorcerer tasked with rescue his beloved princess from an evil overlord.

Next up is Flynn: Son of Crimson, an indie action-adventure game that boasts colorful 2D pixel art characters and environments.

In it, players take on the role of the titular Flynn along with his companion Dex as the pair set out to save their home from a dark evil force.

The game features a robust combat system that allows for a wide array of weapons, abilities, and attacks along with Metroidvania-inspired progression.

Axiom Verge 2 is another sequel that’s sure to appeal to Shovel Knight fans while being a solid 2D action-platformer in its own right.

Much like its predecessor, the game takes on a very Metroidesque tone that includes atmospheric sci-fi environments rendered in NES-inspired pixel art.

This includes a host of abilities that encourage players to retrace their steps to reveal hidden pathways with upgrades and items that come in handy with later bosses.

Continuing on, Skul: The Hero Slayer is a 2D roguelite action-platformer about a small cape-wearing skeleton hero.

Due to his bony makeup, the protagonist can replace his head with different skulls to buff his stats and obtain new powers.

Combine this with a vast arsenal of weapons tailored for different playstyles and you end up with a lot of creative options for tackling each challenge.

TMNT: Shredder’s Revenge is a retro-inspired action game that follows the iconic crime-fighting turtles as they take down their biggest villains.

To this point, it supports up to six players online and locally, allowing you to team up with any pizza-loving buddies to fight the forces of evil once and for all.

In it, you set out to explore the nightmarish world of Cvstodia in an effort to break free from their eternal damnation.

Throughout the journey, you’ll get to face off against hordes of otherwordly enemies, perform savage executions, and upgrade abilities to grow stronger.

Next up on our list is Cuphead, a visually-striking run and gun game that comes courtesy of Studio MDHR.

Like Shovel Knight, the game sells itself as a tough-but-fun action-platformer that centers on a titular hero and his brother as the two set off on an adventure.

The third and final sequel we’re including here is SteamWorld Dig 2, an indie metroidvania that builds on the solid foundation of its predecessor.

In it, players control a steambot named Dorothy as she tracks down the protagonist from the first game in a dry desert town built atop a sprawling network of mines.

The core gameplay loop revolves around digging into the ground, gathering treasure, and managing resources to ensure you make it back to the surface in one piece.

Like Shovel Knight, Celeste is a critically acclaimed 2D action-platformer that manages to strike the perfect balance between gameplay and story.

It centers on a girl named Madeline as she tries to escape the struggles of everyday life by climbing a mysterious mountain.

In it, players control a silent sword-wielding bug knight on a quest to explore the darkest depths of the kingdom of Hallownest.

The game is very much the yin to Shovel Knight’s yang and offers challenging platform levels, unique abilities, and impressive hand-drawn visuals.

Another game that will scratch any retro itch is The Messenger, an indie Metroidvania that combines 8 and 16-bit pixel art graphics.

The game casts players as a ninja on a mission to deliver an ancient scroll by following a treacherous path littered evil monsters and deadly traps.

Much like Shovel Knight, The Messenger’s side-scrolling gameplay functions as a love letter to classic NES platformers.

Dead Cells is another popular indie game like Shovel Knight that puts its own spin on the Metroidvania genre with roguelite progression.

Coming from the mind of Super Meat Boy creator Edmund McMillen, The Binding of Isaac is an indie roguelike that draws inspiration from The Legend of Zelda.

Loosely based on the biblical story of the same name, Rebirth casts you as Isaac, a child forced to flee to his basement after his mother goes insane. 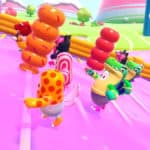