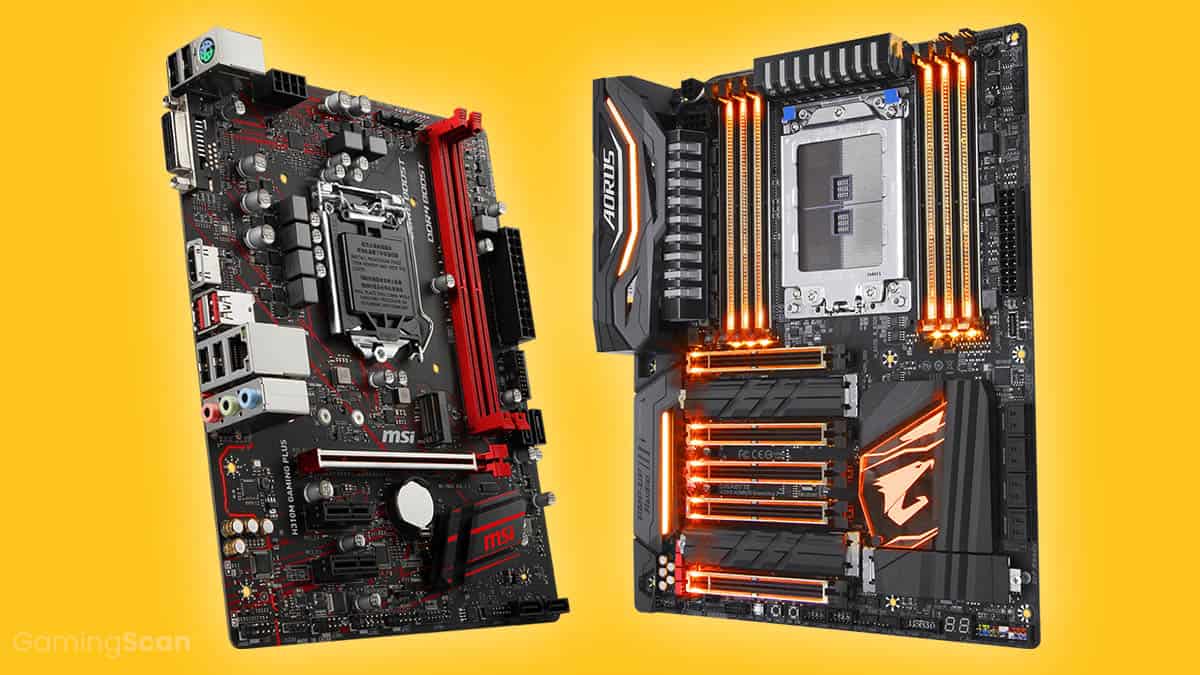 Your motherboard acts as the glue that makes your whole computer build work together. So besides, buying a reliable, high-quality motherboard, it’s also vital to purchase one that can interface and connect with all other components of your machine.

There are many different categories and prices of motherboards to choose from, but not every model can connect with every part. For your convenience, we’ve compiled a list of the best micro ATX motherboards for you to look through and choose from. With any luck, this list should make your motherboard-shopping adventure fast and easy!

Micro ATX motherboards are the perfect combination of affordability and versatility. Since micro ATX is slightly smaller than your typical ATX motherboard, you save a bit of money on materials without sacrificing too many bells and whistles. While micro ATX still isn’t for everyone, it’s an excellent place to start for budget and high-end builders alike, especially if you’re looking for a slightly smaller PC.

Regardless of whether you’re ready to spend on a brand-new card or you’re looking for a cheaper budget option, we have plenty of popular choices here for you. 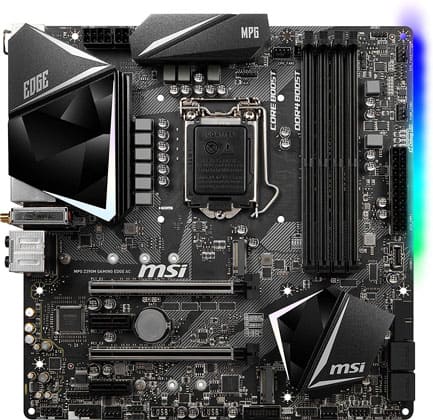 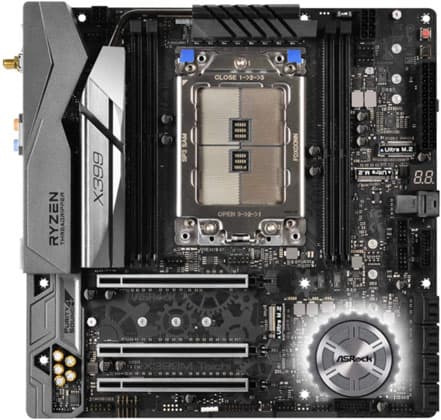 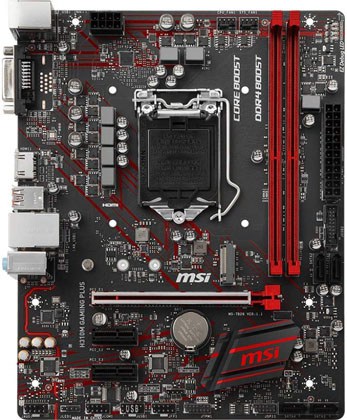 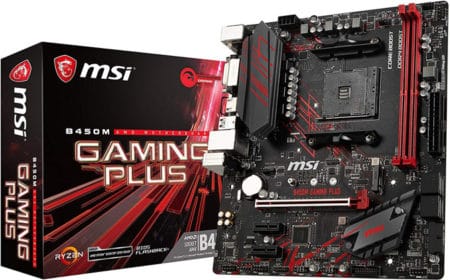 The MSI B450M is a hard hitter that sits at an excellent price point for PC builders. In fact, the entire line of MSI’s Gaming Plus motherboards is made up of reliable, inexpensive cards.

These cards are a step or two down from cutting edge, but they’re not outdated, either, as the TR4 edges out the A4 sockets in overclocking potential. However, B450M Gaming Plus will still support just about any parts you throw at it.

While the motherboard itself doesn’t have anything fancy in the way of LEDs, it does have a pleasing red-on-black color scheme, a common theme among MSI products. While this look might not go with every build, it’s not obtrusive from inside the case, especially since most LED components tend to drown it out anyway.

You need to be aware that this motherboard has some noticeable space constraints, specifically with air coolers. Make sure to double-check whether your CPU cooler will fit with all of your other components before purchasing. 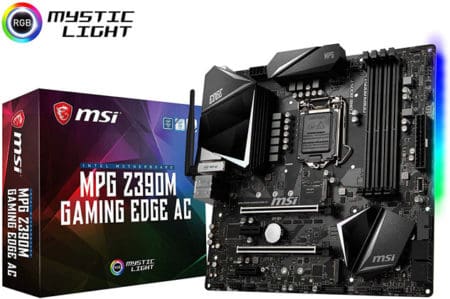 The MSI MPG Z390M Gaming Edge AC is MSI’s answer to a high-quality, well-rounded motherboard that looks attractive without breaking the bank. While the Z390M isn’t by any means cheap, it’s not overly expensive, either; it sits at a medium point between top-tier and budget cards.

That being said, the Z390M doesn’t look like a budget card. It’s decked out in LEDs and decorated with a sleek black-and-silver color scheme. The effect is something like an expensive sports car but at a much lower price. Additionally, this motherboard comes set with wi-fi as well as two GPU slots for the dedicated gamers.

On top of all that, this board has got some serious overclocking potential. However, make sure you’re aware of your PC’s temperatures when overclocking, as this small board can get hot. If you’re planning to overclock significantly, consider investing in a liquid cooling system for increased performance and safety.

This card is an excellent example of the way a micro ATX card can deliver on features and performance despite its smaller form factor. If you’re looking to compromise on space but not functions, this card should be a contender for you. 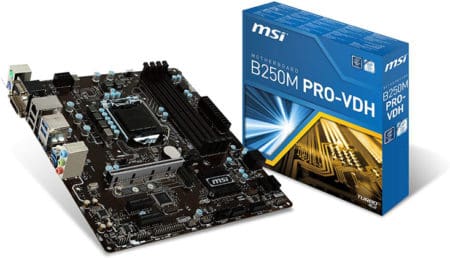 The MSI Pro Series B250 Pro-VDH is a slightly older graphics card that nonetheless keeps some excellent features. In its day, it was top-of-the-line, and today, it makes an excellent mid-range board, despite being a bit on the pricy side. The board itself is reliable, and it has an unusual distribution of features for its age.

For one, this motherboard has HDMI, VGA, and DVI ports to choose from. However, it doesn’t have any on-board DisplayPort functionality. However, it does have a USB-C connection, which is usually only found on newer units.

Unfortunately, since this board is a bit older, it’s available in somewhat limited quantities, and this has driven the price up. However, if you can find this card on sale or at a discount, this is a reliable and attractive board for any casual PC builder. 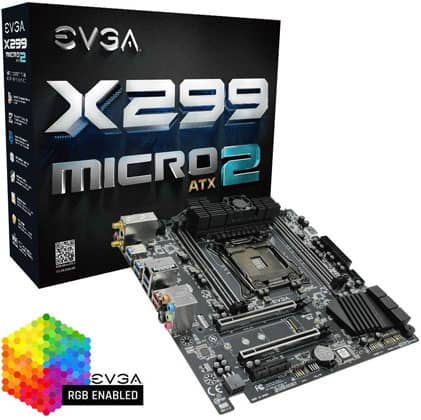 The EVGA X299 Micro ATX 2 is a perfect example of a modern, top-of-the-line graphics card. Aside from our other luxury pick, the X399M Taichi, which we go over below, the EVGA X299 is the biggest beast in our lineup. It runs a quad-channel RAM setup that’s capable of handling an impressive 128 gigabytes of data, for one.

Of course, as any high-end motherboard can, the X299 can support multiple graphics cards, too. While this card isn’t cheap, it comes in at a very respectable price point for a luxury card. If you’re looking for a powerhouse of a card at a reasonable price, look no further! 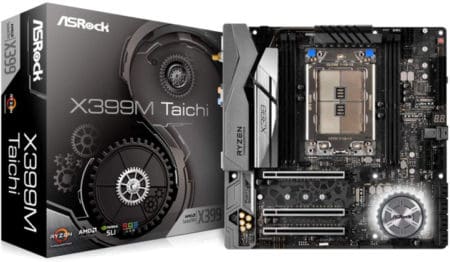 The ASRock X399M Taichi is the big brother to the EVGA X299 we looked at above, and this is true in terms of both luxury features and price. However, while this card is the most expensive one in our lineup, it delivers the most features, too.

The only thing that this board seems to be missing is visual connections. Unless they’re undocumented or otherwise hidden, this board has no HDMI, VGA, or DVI ports to be seen. If you’re plugging into the motherboard, your only options are to use USB-to-X cords to attach to an external monitor.

That being said, it’s also worth noting that this card is one of the only micro ATX cards available that also supports AMD’s Threadripper CPUs. As such, if you have your eyes set on both the Threadripper line and the micro ATX board, this card should definitely make it to your final list.

The B450 lineup of cards has an exceptional list of high-performers, and the two that we feature in this article reflect that duality. Just like the Gaming Plus from earlier, the MSI B450M Pro-M2 is an excellent compromise between flavor and effects. While very similar to the Gaming Plus, it has a few standout features that make it worth looking at as well.

As one of the better all-around gaming motherboards we’ve looked at, the Pro-M2 comes in two versions: the original, and the V2. We’ve included the original version here because it seems to have fewer problems, but the V2 version, notably, is less expensive than the original. This could be because the originals are more in-demand, or perhaps they are no longer being manufactured and are thus rarer.

Most notably, if you aren’t a fan of MSI’s red-on-black color scheme that they use in many of their other cards, this one is a much more subtle grey-on-black. Some fans may prefer this look, especially for builds that don’t utilize the color red. 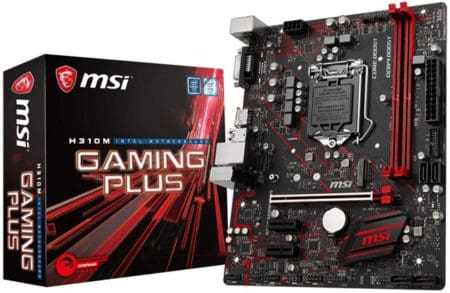 As the cheapest option in our lineup, the H310M is a genuinely inexpensive option. However, as most budget options go, you will sacrifice a bit in the way of performance as you save money. Fortunately, though, you won’t end up sacrificing aesthetics – as long as you like MSI’s persistent red-and-black theme, that is.

That being said, this board is sturdy and reliable, and while it’s a bit bare-bones compared to our other options, it still has everything you need for an excellent budget PC build. 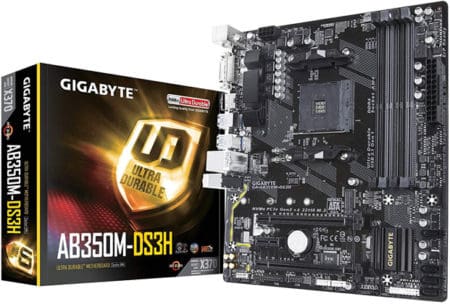 The Gigabyte AB350M-DS3H rounds off our list of motherboard contenders, and it’s another slightly-older card that still performs well. While this card isn’t brand-new, It’s certainly not outdated, either, and it still brings a lot of attractive features to the table.

Namely, this board has 4 RAM slots as well as 2 PCIe-16 slots, which means you can max out this little card’s performance in reasonably short order. The card comes complete with a beautiful LED light strip, too.

Unfortunately, this card is subject to the same pricing issues as the MSI Pro-Series B250. However, similarly to the B250, if you can find this card at a low price or on sale, don’t hesitate to buy it!

In the end, any reliable, hard-working graphics card has its own pluses and minuses. All of the graphics cards included in this list are strong contenders, and some may be more appropriate for you than others based on your situation!

In general, though, our by far-and-away favorite addition to this list was the MSI MPG Z390M Gaming Edge AC. While this graphics card isn’t a budget card, it still comes with pretty much all of the bells and whistles you’re looking for at a very reasonable price.

Unless you have twice the price of the Gaming Edge AC to spend on a luxury board, you’ll be hard-pressed to find a better mix of specs, reliability, and appeal anywhere else.

However, if you do have that bit of extra gravy to spend, we recommend exploring the ASRock X399M Taichi, especially if you’re looking for a cutting-edge motherboard. Even though the Taichi isn’t a brand-new board, it’s aged exceptionally well, and it can beat out most motherboards available today.

On the other hand, if you don’t have much to spend on a card, you may want to look into the MSI H310M Gaming Plus. While the specs on the H310M are a bit reserved, the price is very reserved, too. For about the price of a fancy dinner for two, this card can deliver everything you need to get started, so it’s incredibly well-suited to beginners as well as budget builders.

That being said, every entry in this list is an excellent pick! The MSI B450M Gaming Plus is another excellent all-around pick, especially if you’re looking to spend a bit less than what the Z390M sells for. The EVGA X299 Micro ATX is also another luxury option to the Taichi, especially if you’re looking for an Intel-enabled motherboard instead of an AMD-friendly one. 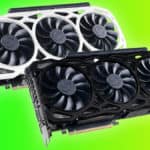