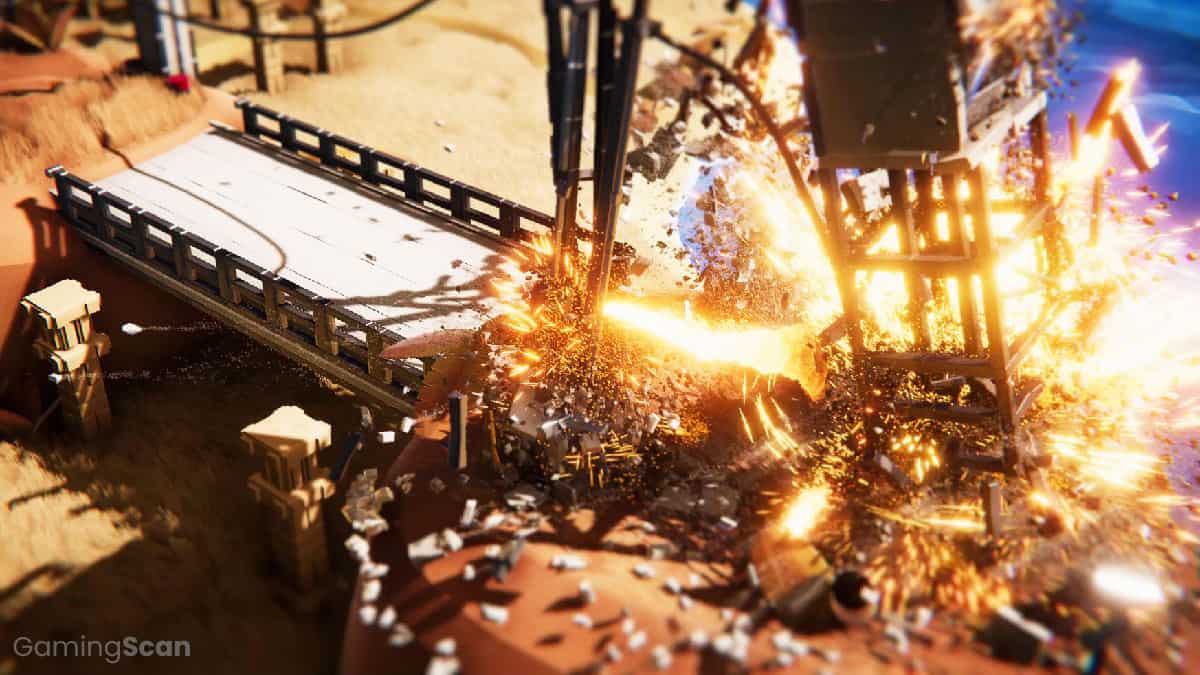 From PC sims with realistic physics and damage modeling to sandbox games with destructive tools, there’s something so satisfying about blowing stuff up in a video game.

While the go-to titles for this genre are games like Teardown, BeamNG.drive, and Minecraft with the power of modding, PC gamers have a lot more options in 2023.

In this list, we’ll highlight the best destruction games for PC that will blow you away with their mayhem-making potential and demolition-driven gameplay.

For more PC gaming recommendations, check out our growing library of curated lists, and comment below with your top destruction game of all time!

First up on our list is the latest installment in the rebooted Destroy All Humans series, which centers on an alien soldier’s plight to enslave humanity.

In Destroy All Humans 2 – Reprobed, players reprise their role as Crypto as he explores 1960s Earth harvesting human DNA, getting revenge on the KGB, and destroying as much as possible.

The sequel introduces larger open-world environments that serve as a perfect playground for alien hijinks and destruction via your trusty saucer that can level entire buildings.

Touted as a vehicle-building sandbox, Instruments of Destruction gives players the tools to create crazy construction contraptions and use them to demolish buildings and complete objectives.

The game is powered by an advanced physics-based destruction system that allows you to blow up structures piece by piece in real time.

Over time, new parts can be unlocked to outfit vehicles with giant chainsaws and rocket thrusters, in turn providing you with new possibilities and inspiration for explosive experimentation.

Next up is ABRISS, another physics-destruction building game that revolves around creating vehicles from different parts and using them to smash targets.

This is done using a detailed simulation system that’s capable of rendering thousands of little particles of debris in real time with little to no dips in framerate.

The game features a campaign mode where players must use a limited number of parts to achieve their goal along with a sandbox mode for unleashing your inner madman on digital cityscapes.

As we mentioned at the top, Teardown continues to deliver a fun and unpredictable PC sandbox powered by cutting-edge physics and unparalleled destruction.

In the main campaign, players take on the role of a construction company operator assigned to complete increasingly sketchy jobs ranging from petty car theft to building demolition.

Every scenario can be tackled in various ways depending on your tools of choice and is further complemented by a dedicated sandbox mode with extensive modding support.

Any actions taken by the player will have an impact on AI worshippers’ ability to establish new kingdoms, travel to new lands, and wage war with different races.

Of course, as divine ruler, it’s up to you to decide whether or not to intervene by triggering deadly natural disasters or attacks from giant mythological beasts.

Going from the power of an all-seeing god to the fiery fun of fireworks, Fireworks Mania is a casual explosion simulator about launching fireworks.

It’s admittingly small-scale compared to other games on this list but can still be a lot of fun for anyone who enjoys creating beautiful firework displays or simply blowing stuff up.

There are several types of fireworks to arrange and stack however you see fit, and the game uses physics-based interactions to ensure no two experiments play out quite the same.

Kill It With Fire

Of course, fireworks won’t get you very far if your primary goal is to squash out a spider rebellion like the one found in Kill It With Fire.

This comedic fire-person action game has you taking on the role of a spider hunter tasked with exterminating an arachnid threat using any weapon, tool, or appliance at their disposal.

These range from frying pans, knives, and flamethrowers to even more outlandish weapons like throwing stars, hand pistols, SMGs, rocket launchers, and a spider-killing weed whacker.

It includes a full-length campaign mode with 54 scenarios as well as the usual slew of sandbox, level editor, and multiplayer modes to build and destroy to your heart’s content.

Besiege also supports modding via Steam Workshop where you can share and download other players’ blueprints for mobile cannons, flying war machines, and anything else you can imagine.

In it, you play as a salvager working for a company contracted to carve and slice apart defunct spaceships to recover valuable materials.

This is done using various equipment that doesn’t always play well with each ship’s components, often resulting in giant explosions as you accidentally cut through the wrong pipe or wire.

If destructible video game environments get you excited, you’re sure to enjoy messing with Red Faction: Guerrilla’s highly-detailed physics engine.

Originally released in 2009, this futuristic third-person shooter sees you traveling to Mars to liberate its people from corporate overlords using a deep arsenal of weapons and vehicles.

Destruction fans looking to play the best version are welcome to pick up the updated Re-Mars-tered edition, which includes improved graphics for all your destructive needs.

Another great game for environmental destruction is MechWarrior 5: Mercenaries, a first-person shooter with meaty mech-based combat and tactical elements.

Part of the BattleTech series, it boasts a challenging campaign where players can cause as much wanton destruction as they want to rival mechs, natural terrain, and urban cities.

Things can be taken even further by installing MechWarrior 5 mods that introduce new mission packs and biomes that offer even more destructible objects.

Our next suggestion is a unique 2D action roguelike called Noita in which physics simulations are used to generate pixels on-screen.

This allows for dynamic interactions with procedurally-generated environments and enemies that can be burned, exploded, or melted using various spells.

Each spell is hand-crafted by the player character, a magic-wielding witch, and new ones can be discovered by experimenting and combining different elements.

Continuing with our list of PC destruction games, Demolish and Build 2018 is an indie demolition sandbox with realistically rendered physics simulations.

In it, you play as the leader of a construction company tasked with demolishing huge buildings to make way for new properties.

To carry out your plans, the game includes a variety of specialized hand tools and machinery such as cranes and bulldozers that can make quick work of structures.

Open-world games make for perfect destructive settings as they’re generally packed with NPCs, vehicles, buildings, and other objects that will go boom.

This often requires the player character to wield a rocket launcher, grenade, explosive, or if you’re Just Cause 4’s Rico Rodriguez, all of the above.

And if that wasn’t enough, Rico is also equipped with a grappling hook that can be used to zip across environments as well as tether objects together to trigger fiery explosions.

Moving over to vehicle destruction games, Wreckfest is an arcade racer that serves as a spiritual successor to the FlatOut series and features similarly destructive racing.

This is due to its soft-body damage modeling and visceral car combat systems that allow for detailed collisions and vehicle damage over time.

The best way to see Wreckfest’s tech at work is to fire up its demolition derby mode where you’ll have to crush, smash, and ram your way to being the last car standing.

Next up is BeamNG.drive, a realistic driving sim powered by detailed physics simulations and soft-body damage modeling that allows for crazy car crash sequences.

Like several of the games mentioned on this list, BeamNG is very mod-friendly, allowing players to take its destruction sandbox design to even greater heights.

This includes community-made content that adds new vehicles, parts, and maps to unleash your inner stunt driver and see metal deathtraps get torn to pieces.

Players are given a roster of vehicles to operate in hilarious physics-driven levels where the goal is to rack up as many points as you can by setting up various collisions in the environment.

There’s a replay system for keeping track of your highlight reel along with level editing and a deep library of user-generated challenges via Steam Workshop.

In it, players can build a wide selection of vehicles using various bricks before taking them out into the world for some destructive driving.

Your options aren’t limited to just basic cars either, as Brick Rigs includes blueprints for tanks, helicopters, and planes, each offering the detailed controls and functions you’d expect.

Players looking to destroy on a massive scale are welcome to check out Universe Sandbox, a detailed space sim about exploiting the laws of nature.

In it, players are free to modify the gravity, climate, and other physical characteristics of various stars, planets, and space objects to conduct unique experiments.

This is an excellent way to spark curiosity and learn more about science while having fun cooking up your own cataclysmic world-ending scenarios.

Even though Minecraft is often thought of as a building game, there’s a lot of creative destruction to be done as well.

While most objects in the environment can be broken down using simple tools like an axe, some jobs call for more powerful equipment like explosive TNT.

The prep work involved with gathering materials to craft such items can get tedious but with the assistance of Minecraft mods, you can jump straight to the action. 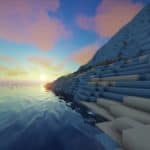