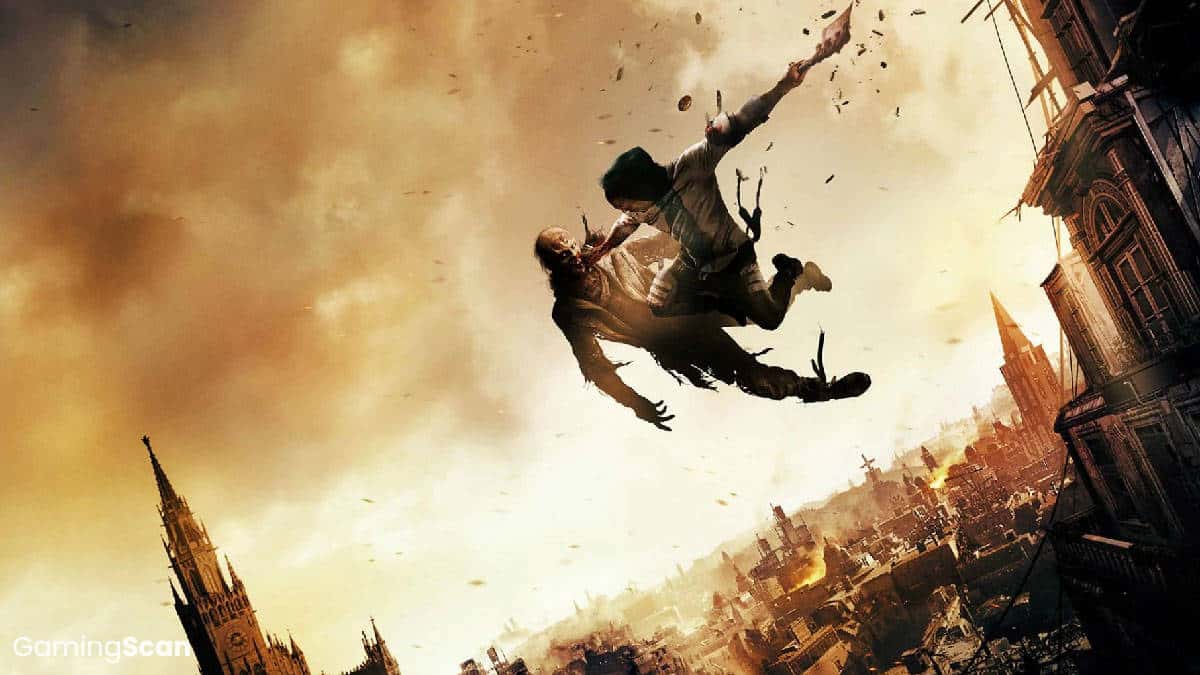 Techland did a fine job designing the game’s detailed world and finding ways to improve the series’ gameplay systems while ramping up the tension and action throughout its branching story.

In this list, we’ll highlight the best games like Dying Light 2 to play in 2023 for anyone who beat the campaign and is hungry for more survival horror games.

We’ll be updating this list in the future with new titles, so make sure to check back and let us know if we missed any of your favorite games similar to Dying Light 2!

If you’re a longtime Dying Light fan then there’s a good chance you’ve already heard of its predecessor, Dead Island.

Created by Techland and released in 2011, the game doesn’t feature any parkour movement but shares many other similarities with Dying Light.

This includes an emphasis on close-quarters combat, weapon crafting, online multiplayer support, and an unlimited supply of flesh-eating enemies to tear through.

We recommend picking up the Definitive Edition, which bundles together all previously released DLC and features full HD graphics, models, and lighting.

Following after the interactive madhouse that was RE7, Resident Evil Village takes the first-person survival horror franchise to new heights with even bigger set pieces and bossfights.

This time around, players are transported to a mysterious eastern European setting where they’ll have to guide an unlikely hero through an onslaught of battles with otherworldly creatures.

In addition to zombies, you can expect to face off against werewolves, vampires, ghouls, and other supernatural monstrosities.

So if you’re looking for another action-packed horror game that emphasizes exploration, combat, and crafting, you don’t want to miss out on Resident Evil Village.

Much like the original Dying Light to Stay Human, Metro Exodus broadens its scope to include bigger open-world environments for players to explore and engage with.

Often cited as one of the most influential open-world franchises, the Far Cry games are known for their first-person combat, unbridled exploration, and gorgeous backdrops.

Far Cry 6 delivers on all three fronts while upping the mayhem and telling a new, politically-charged story about a group of rebels fighting against a corrupt dictatorship.

Set in the lush tropical island of Yara, the game sees you infiltrating enemy bases, gathering resources, and meeting new characters who can either hinder or help your progress.

While there’s no parkour-inspired movement, Far Cry 6 does feature a wide array of vehicles including cars, boats, helicopters, and more.

The Last of Us Part II is another game with visually-striking environments that feel a lot closer thematically to Dying Light 2’s post-apocalyptic open world.

Throughout the story, players go from exploring overgrown forests that have been reclaimed by nature, to sneaking their way through once-bustling city streets that look and feel abandoned.

Like Dying Light 2, the game’s narrative centers on competing factions that are either vying for control, holding deep-seated grudges, or simply trying to survive the zombie outbreak.

Even if the third-person combat and movement may feel very different than Dying Light 2’s, both games do a great job of scratching that survival horror zombie itch.

Next up, The Forest is a challenging survival horror game with a deceptively simple setup in which you play as the seemingly sole survivor of a plane crash who’s searching for his missing son.

As you explore the titular forest, you’ll make increasingly ominous and unsettling discoveries that will bring you face to face with its not-so-friendly inhabitants.

Similar to Dying Light 2, the game features a crafting system that allows you to construct new tools, weapons, and healing items in addition to shelter and other equipment.

Lastly, The Forest also supports online multiplayer for up to 8 players on PC, meaning you can bring your Dying Light co-op crew along for the ride.

Mist Survival is another open-world survival game that’s sure to appeal to fans of Dying Light 2.

For one, it gives you the task of keeping alive in a zombie-infested world by using the resources around you to craft tools, build structures, and kill zombies.

Over time, you’ll develop a formidable base complete with fortified walls and animal traps that will see you through the toughest of swarms.

Like Dying Light, the game also ups the level of difficulty when exploring outside at night or during inclement weather.

There’s no shortage of 4 player co-op shooters and World War Z is one of the few games that gets the formula right while throwing zombies and character classes into the mix.

Not too surprising seeing as it draws most of its influence from zombie hits like Left 4 Dead and Left 4 Dead 2, both of which are still beloved and played to this day.

Where WWZ stands out is its class system, which lets players tailor their playstyle and unlock unique skills along with permanent weapon upgrades that carry over between characters.

Much like Dying Light 2, the game offers an array of zombie enemy types that require you to think strategically and coordinate with teammates to defeat without getting wiped.

Another game that leans even further into Left 4 Dead-style zombie shooting is Back 4 Blood, which has the added benefit of being made by the same developer as L4D.

In it, 1-4 players explore levels teeming with deadly zombies, including some specialized zombie types and bosses that possess unique behaviors and pose a greater threat.

To survive, each squad will have to keep their eyes peeled and communicate when they need backup, healing, or a minute to catch their breath and reload.

Just like Dying Light, the game features an assortment of close-quarters melee weapons to wield in addition to various guns.

For a more story-driven zombie game akin to Dying Light 2, we suggest checking out Days Gone, a former PlayStation-exclusive that’s since been ported to PC.

It sees players taking on the role of Deacon St. John, an outlaw biker on a mission to survive the Oregon wilderness as hordes of zombies called “Freakers” descend upon him.

Along the way, he meets a host of characters who help him along his way in exchange for a favor or two and grant him new customizable traps, weapons, and parts for his motorcycle.

Similar to Dying Light 2, the game features crafting and skill trees alongside an admittingly barebones faction system that does come into play during the story.

Straying away from zombies for a second, Dishonored 2 is a first-person action game that looks and feels very similar to Dying Light 2 in terms of game mechanics.

For one, it plays like a stealth game with fluid movement that incorporates free-running techniques and maneuvers.

Secondly, it places a big focus on melee combat, with some slight variation depending on which of the two playable characters is selected.

And while there aren’t any zombies in the game per se, the plagued enemies you’re going up against do exhibit some undisputedly undead qualities.

Speaking of free-running, if you enjoy Dying Light and Dying Light 2’s take on parkour-inspired movement systems, then Mirror’s Edge is going to be your bread and butter.

Considering the original released way back in 2009, we’re highlighting the sequel, Mirror’s Edge Catalyst, which was released for PC and console in 2016.

In it, you play as Faith Connors, an underground courier whose job is to transmit messages while evading government authorities in a futuristic urban city.

Much like Dying Light 2’s protagonist Aiden, Faith can leverage her superb athleticism to pull off acrobatic feats such as jumping between rooftops, running across walls, and more.

Back on the zombie train, our next recommendation is Zombi, a Ubisoft-developed and published title that was originally released as ZombiU for Nintendo’s Wii U console.

Like Dying Light, the game is a first-person survival game where players must try and navigate a zombie-infested world in the form of modern-day London.

However, the twist is anytime your character dies, their supplies and equipment stay with their body, forcing you to either risk your life getting your gear back or start with a clean slate.

This adds a great deal of tension to each playthrough without straying too far from the traditional zombie survival formula.

If you enjoyed deciding the fate of Dying Light 2’s factions and the city itself, then the State of Decay series is worth looking into.

The goal is simple: stockpile resources, recruit characters to lend a helping hand, and defend your base from horde invasions while navigating each character’s unique personality and traits.

While the game’s combat and movement systems are nowhere near the caliber of Dying Light 2’s, it does a great job at making you feel at the center of its world.

The series has become the go-to for developers looking to put their own spin on co-op-driven zombie shooters, and for good reason.

While its general premise and gameplay loop are simple and straightforward, it’s also one of the most satisfying that focuses on exploring levels, picking up weapons, and killing waves of undead enemies.

It’s best enjoyed with friends and/or mods that allow you to expand upon the base game’s content and add new enemy skins, maps, and graphical enhancements.

Last up on our list is Killing Floor 2, another game created in the same vein as Left 4 Dead but one that manages to shine on its own by upping the carnage any chance it gets.

Whereas Dying Light centers on methodical movements and thoughtful attacks, Killing Floor is all hapless mayhem as you empty an entire clip of ammo on a group of zombies.

Speaking of, KF2 supports a wide selection of playstyles through its dedicated character classes that grant you access to unique skills, weapons, and tools focusing on different areas of gameplay.

GTA Online Guide: How To Get Started
Related Topics Tags