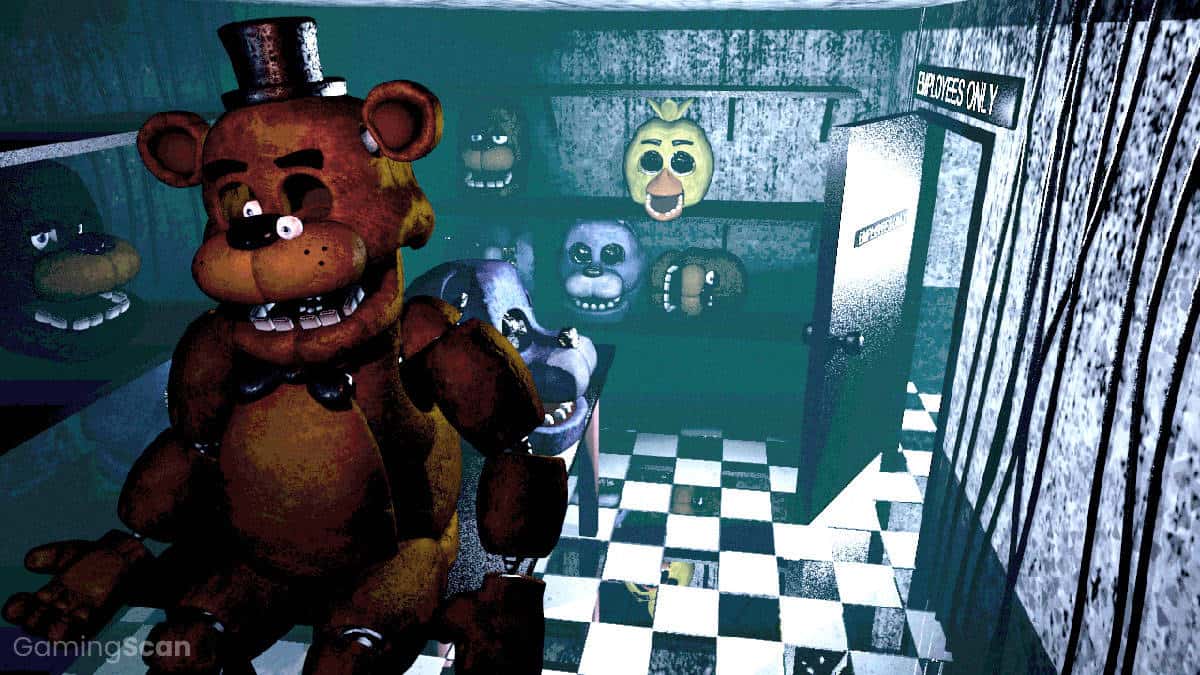 Having burst into the indie scene in 2014, Five Nights at Freddy’s has managed to build a rabid fan base while carving out a unique space for itself in the horror game genre.

The series is known for its rich lore, creepy animatronic characters, and jumpscare-orientated gameplay that see players trying to survive a Chuck E. Cheese nightmare.

So if you’re on the hunt for more games like it, keep reading on to discover the best games like Five Nights at Freddy’s to play in 2022 on PC, console, and mobile.

We’ll be updating this list with more games similar to FNAF as time goes on, so make sure to add it to your bookmarks and check back in the future.

One of the more recent games to come out that’s inspired by FNAF is the first-person horror puzzle-adventure game Poppy Playtime.

Much like FNAF, the game takes a childhood activity, in this case playing with toys, and morphs it into a living nightmare ripe with jumpscares and tense gameplay moments.

In it, players must make their way through a maze-like abandoned toy factory as they’re stalked by an assortment of monsters based on children’s toys.

The gameplay is a lot more varied than most FNAF titles where your character’s movement is limited to a single room, with players able to explore different rooms to solve puzzles and run from enemies.

There have been five games released in the series so far, and each one casts the player as a character tasked with monitoring a house’s fixed camera feeds and identifying any “anomalies.”

These can range from objects that move around on their own to mysterious intruders with disturbing features and behaviors, many of which will try to jumpscare the player.

Similar to FNAF, the goal of the game is to survive the night by watching the cameras and reporting anomalies as they’re discovered to prevent your character from becoming overwhelmed.

Next up, The Backrooms 1998 is a first-person survival horror game with escape room elements where players must explore, find clues, and use special tools to unravel the story.

You play as a young teen that falls into the depths of the mysterious “backrooms,” a liminal space with infinite levels where unfathomable creatures roam freely.

To avoid them, players will have to run and hide in crawl spaces, under tables, and inside lockers until the coast is clear.

Like FNAF, the game has strong themes of psychological horror including monster chase sequences that are not recommended for the faint of heart.

Meant to be played by up to four players, Lunch Lady is a survival horror game that casts you as a student on a mission to break into their school and steal the answers to their final exam.

However, standing in your way is a murderous lunch lady that has become possessed and now wants to hunt you down.

Your goal is to find all 10 pages containing the test answers, use keys to unlock the doors, and make it out of your school alive before the lunch lady catches you.

Much like Five Nights at Freddy’s, the game uses randomized elements to ensure each playthrough is different, including the lunch lady’s route and the location of certain key items.

Despite its family-friendly aesthetic, Bugsnax’s story is very much rooted in horror and will take players along for a wild adventure as they explore Snaktooth Island.

In it, you take on the role of a reporter assigned to investigate the mysterious island, its inhabitants, and the strange creatures known as bugsnax.

If you like researching the lore behind each FNAF game, then you’ll no doubt enjoy immersing yourself in Bugsnax’s unsettling premise.

Prognostic is another first-person detective horror game where players must practice different psychic rituals to stay alive and uncover secrets.

The game sees you returning to your late grandmother’s home to make contact with her spirit and find out the cause behind your parents’ deaths.

However, things quickly go wrong and you find yourself face to face with a host of supernatural horrors that can only be removed by performing certain rites.

Similar to FNAF, every night in Prognostic introduces new challenges as you look for killers, criminals, and missing people that have disappeared under mysterious circumstances.

If you want a more action-orientated horror game that plays similarly to Five Nights at Freddy’s: Security Breach, then Resident Evil Village is a solid choice.

In it, players reprise their role as Ethan Winters from RE7 as he sets out to rescue his missing daughter while dealing with a mysterious illness.

Building off of its predecessors, the game sees you traversing a harrowing European village overrun with mythological monstrosities including Lycans, zombies, vampires, and more.

Much like FNAF: Security Breach, Village features an abundance of first-person chase sequences that will get your blood pumping and make you fear for your life.

Following in the footsteps of viral horror games like FNAF, Phasmophobia has greatly benefited from a surge of YouTube and Twitch let’s plays that helped catapult the game to mainstream popularity.

Billed as both a single and multiplayer-driven experience, it sees you investigating creepy locations experiencing paranormal activity and identifying the root cause.

This can be any number of over 20 different ghost types that require you to narrow down your choices by paying attention to the ghost’s behavior and utilizing special equipment.

Furthermore, every run uses procedurally generated map layouts, item locations, and paranormal entities to keep you and your team on your toes.

Bendy and the Ink Machine

Similar to how FNAF has warped our views on animatronics as a form of children’s entertainment, Bendy and the Ink Machine toys with the concept of vintage cartoon characters.

Presented as a first-person puzzle horror game, it sees you exploring an animator’s long-since abandoned workshop where 2D characters have come to life.

To make it through the game, players must solve riddles while avoiding enemies and searching for clues to help them escape the workshop.

Bendy and the Ink Machine shares many of the same thematic elements as FNAF and has equally intriguing lore that can be a lot of fun to dive into.

In this game, you take on the role of a pizza delivery person who finds themselves trapped in a mysterious house with a terrifying little girl named Emily.

To ward off her attacks and stay alive, players must locate and interact with Emily’s dolls while appeasing her more sinister intentions.

Instead of advancing the story by surviving multiple nights like in FNAF, Emily Wants to Play measures progress on an hour-by-hour basis during a single night.

The original Slender: The Eight Pages was an experimental first-person game that’s often credited with paving the way for later survival horror experiences such as FNAF.

However, the game also has its own direct successor in the form of Slender: The Arrival, which fully realizes the horror icon’s world with updated gameplay, visuals, and features.

Created by Blue Isle Studios with help from the writers behind the Marble Hornets series, The Arrival introduces a new storyline where players must evade Slender Man to survive.

Similar to FNAF, the game puts a large emphasis on randomized elements to increase its replay value and keep players coming back.

Outlast is another survival horror game that draws inspiration from Slender: The Eight Pages while featuring first-person gameplay similar to FNAF.

In it, you play as an investigative journalist whose research leads them to an abandoned psychiatric hospital deep in the woods.

Much like Five Nights at Freddy’s, players rely on a camera, specifically a handheld camcorder, to keep track of enemies and see where they’re going.

Additionally, to keep the camera powered on they must scavenge for batteries and conserve battery life by sometimes casting themselves in total darkness.

Based on the iconic Alien franchise, Alien: Isolation is a first-person survival horror game that takes place 15 years after the original film is set.

Players are cast as an engineer named Amanda Ripley as she gets a potential lead as to her missing mother’s location and decides to pursue it.

What ensues is a sci-fi horror adventure that drops players in dire circumstances with limited resources and several threats.

Similar to the animatronics in FNAF, the enemies in Alien: Isolation will relentlessly hunt and catch the player if they’re not careful.

Playable in both VR and standard desktop modes, Boogeyman is a devilishly simple horror game that has much in common with the Five Nights at Freddy’s games.

In it, you control a young boy who’s terrified of the Boogeyman coming to stalk him in his room at night and decides to stay up using only a flashlight as his means of defense.

To survive until the morning, you’ll have to listen for noises and shine a light on any monsters while conserving the flashlight’s battery and searching for coffee, cherry bombs, and glow sticks.

With each passing night, the game introduces new challenges as enemies change hiding spots, lights begin to break, toys come alive, and strange noises can be heard throughout the house.

Last but not least, Amnesia: The Dark Descent is another widely beloved survival horror game that predates FNAF by a few years.

It offers similar first-person gameplay in which players must avoid disturbing-looking enemies while searching for items and clues to ensure they survive.

In addition, Dark Descent introduces an insanity mechanic where players start to lose their grip on reality and hallucinate the longer they stay in the dark.

The game is a fantastic recommendation for any FNAF who hasn’t had a chance to play it or wants to revisit one of the best horror games of all time. 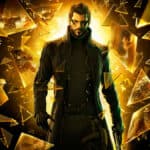