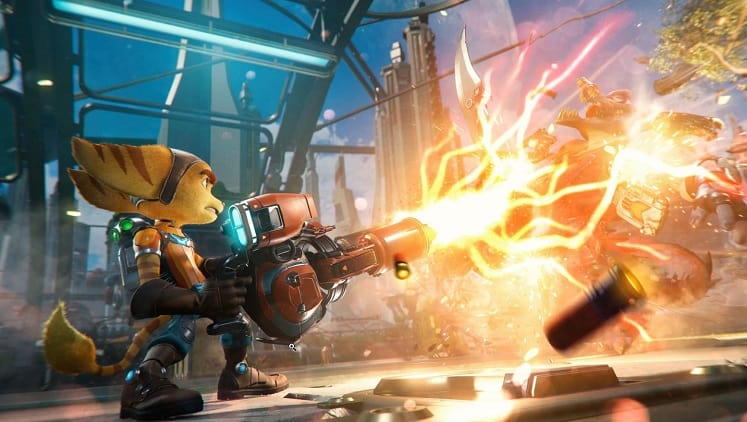 Are you looking for a list of the best games like Ratchet & Clank? Well, we’ve got you covered.

The Ratchet & Clank series is known for its quirky characters, satisfying shooter-platformer gameplay, and cinematic-quality presentation.

Although the franchise is still around today, we thought we’d share our top picks for what to play after you’ve completed the most recent entry, Ratchet & Clank: Rift Apart.

In this list, we’ll be recommending games that are similar to Ratchet & Clank in one way or another, along with the platforms they’re available on.

At the time of its release, Sunset Overdrive was seen as a significant departure for Ratchet & Clank developer Insomniac Games. However, in hindsight, we can see it shares many commonalities with Insomniac’s other titles regarding writing and specific aspects of gameplay.

The first thing you’ll notice is plenty of breaking of the fourth wall, a recurring joke in Insomniac games. Additionally, one of the game’s core mechanics is using grind rails to get around the open-world, which feels reminiscent of the grinding sections in various Ratchet & Clank games.

Lastly, it features a wide selection of powerful weapons, gadgets, and gizmos with ridiculous names like ‘The Flaming Compensator’, which happens to be a shotgun with two wooden balls hanging from its handle. While Sunset Overdrive does swap out R&C’s futuristic sci-fi setting in favor of a more contemporary punk rock-obsessed metropolis, its environments are highly-detailed and fun to explore.

Although Toys for Bob is the developer behind Spyro Reignited, Insomniac is responsible for making the original three games in the series, which carry their distinct brand of humor. Much like Ratchet, Spyro is portrayed as a sarcastic do-gooder who’s not afraid to make the occasional pun.

Toys for Bob did a fantastic job recreating the Spyro universe, updating environments to look better than ever before, and even injecting some much-needed detail into some of the old character designs. Reignited Trilogy is the best way to experience these games on modern consoles if you’ve got a craving for some nostalgia.

If you’ve ever wanted to venture far, far away from the Solana Galaxy setting of most R&C games, then Star Wars Jedi: Fallen Order might be the game for you. Developed by Respawn, the game manages to capture the cinematic quality of the films and adapt it to a video game in a way that feels both engaging and authentic.

Set after the events of Episode III, the game sees you playing as Cal Kestis, a Jedi Padawan on a mission to uncover the mysteries of an ancient civilization. He soon finds himself in the crosshairs of the Empire and their deadly Inquisitors, who continue to pursue you throughout the game.

The gameplay is a mix of real-time combat, open-ended exploration, and 3D platforming on par with the Ratchet & Clank games. The game does a great job of using the Star Wars mythos to flesh out its world, including numerous in-universe references, interesting character backstories, and big set-pieces set in familiar locations.

Over the years, Insomniac and Naughty Dog have developed somewhat of a friendly rivalry while operating under the PlayStation brand. Their constant attempts to one-up each other with every release is reflected in several entries in both the R&C and Uncharted series, resulting in some of the best PlayStation exclusives to date.

If you’ve dabbled around with the Uncharted games before or simply want to experience the most recent installment, we recommend checking out Uncharted 4: A Thief’s End. While it’s tonally much darker than your average R&C game, you can always count on Nathan Drake to spout the occasional quip or witty insult at his foes.

Additional characters like Sully and Nadine help create interesting dynamics for Drake to play off, much like Ratchet and Clanks’ unique chemistry. If you end up enjoying yourself, consider going back and playing the rest of the Uncharted series, even if the first two games are a bit dated by today’s gaming conventions.

While it may be a bit more systems-driven than your average R&C game, Obsidian’s latest foray into sci-fi storytelling is sure to satiate the biggest of appetites for galactic tomfoolery. The game casts you as The Stranger, a blank slate of a character who’s tasked with determining the fate of the Halcyon Space Colony and its starving citizens.

Your mission sees you journeying across and exploring eight planets that boast exotic locales, dangerous creatures, and a host of NPCs to befriend or betray. Characters that join your party can lend a hand in battle, give you special perks, and possess unique backstories you can unravel by completing sidequests.

Much like the R&C games, The Outer Worlds gives you a wide array of guns and science weapons to experiment with and cause mayhem. Every challenge in the game can be handled in various ways based on your preferred playstyle, allowing you to talk yourself out of a jam through dialogue options or brute force your way to victory.

If you’re desperate for a new action-platformer like Ratchet & Clank but can’t be bothered with remakes or sequels to existing franchises, Effie offers an original story focusing on new characters and a colorful fantasy-inspired setting.

You play as a young man named Galand on a quest to reclaim his youth after a witch curses him with old age. Armed with a magical shield, Galand sets out across the region of Oblena to liberate its cities and overcome the witch’s monsters.

The game has a distinctly retro feel that’s clearly meant to evoke memories of playing old school classics like R&C and Crash Bandicoot only with modern graphics and controls. It’s a bit on the short side compared to other entries on this list but achieves a lot with its relatively small scope.

Admittedly the most dissimilar game on this list, some aspects of Marvel’s Spider-Man may still resonate with fans of R&C, especially if you admire how Insomniac structures their stories. While it still falls prey to many of the superhero video game tropes we’ve come to expect, the game does a great job at paying homage to the original comics.

Peter Parker is a prime candidate for Insomniac’s quippy dialogue and won’t hesitate to spout one-liners as you web-swing around New York City. His boisterous personality is frequently juxtaposed by supporting characters like Yuri, an NYPD Captain with little patience for jokes.

The game’s funniest moments are whenever Spider-Man is forced to engage with the larger-than-life personalities that make up his rogue’s gallery of villains. Additionally, combat is modeled after the Batman Arkham series and offers plenty of room to experiment with Spider-Man’s unique abilities and gadgets.

Crash Bandicoot is one of the many byproducts of the video game industry’s obsession with mascot characters during the 1990s. While the rambunctious marsupial may not have the ability to communicate verbally like Ratchet, he can still convey a lot of information using facial expressions.

That being said, most of your time in N. Sane Trilogy will be spent traversing remastered platforming levels from the first three games in the series: Crash Bandicoot, Cortex Strikes Back, and Crash Bandicoot: Warped.

This is another Toys for Bob project and carries the same outstanding level of polish as Spyro Reignited Trilogy. The updated version also adds a ton of quality-of-life improvements such as unified checkpoints, a dedicated save system, and the ability to pause the game mid-level, which sounds like a crazy thing to type out in 2022.

A Hat In Time

Despite its obvious Super Mario 64 influence, A Hat In Time has a lot in common with the R&C series. Both feature cartoony graphics, characters with bold personalities, and fine-tuned 3D platforming controls.

In it, you play as an adorable girl who dons a top hat and explores the galaxy from the comfort of her space ship. One day, her adventure comes to a screeching halt when the Time Pieces fueling her ship are taken away and scattered on a nearby planet.

What ensues is an epic journey spanning multiple worlds with unique themes and a cast of over-the-top characters. While many of them start out as enemies, Hat Kid can usually win them over using her cute looks and charming personality.

To round things out, we’ve got one more action-platformer that incorporates some similar ideas as the Ratchet & Clank series. Inspired by the iconic Banjo Kazooie games, Yooka-Laylee is a modern interpretation of old school 3D platformers with vibrant cartoony graphics.

Similar to R&C, the game focuses on two characters who must work together to achieve their goals. Yooka is a green chameleon who can walk around, breathe fire, and curl into a ball, while Laylee is a small purple bat that can help Yooka fly and solve various puzzles.

The similarities between them and Ratchet and Clank aren’t quite 1:1, but you can see where we’re headed with this. If you’re in the mood for a retro 3D platformer without any outdated controls or graphics, Yooka-Laylee will definitely help scratch that itch. 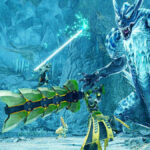