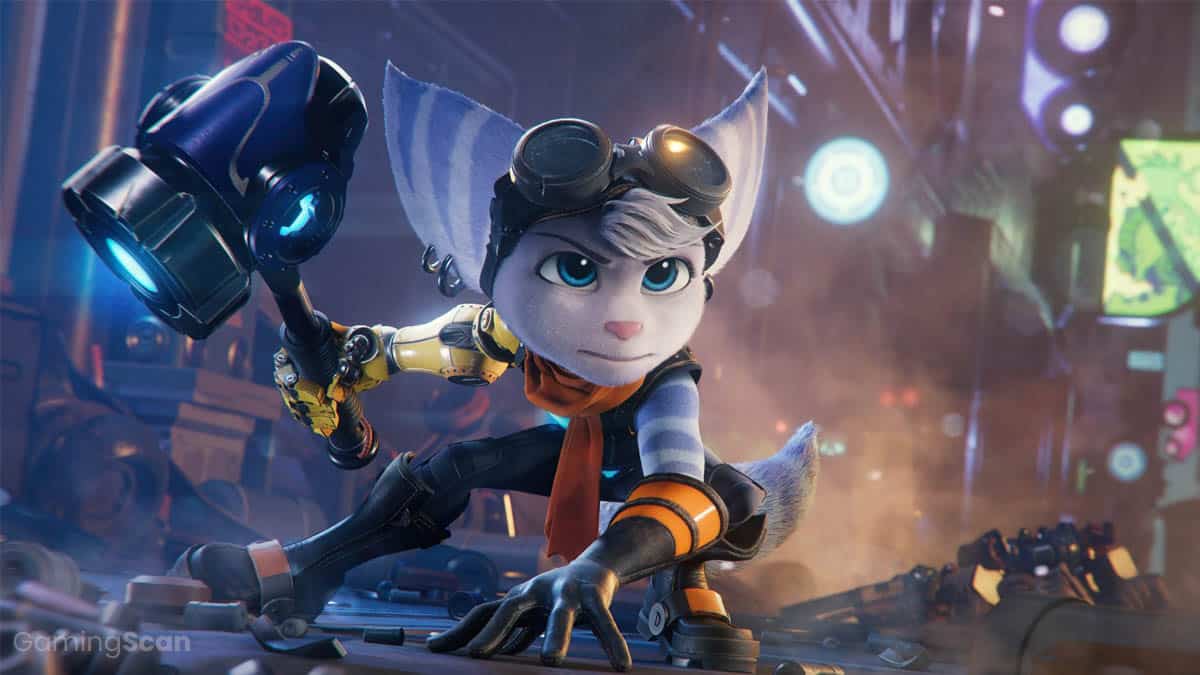 The Ratchet & Clank series has been around for nearly two decades and, in that time, has solidified itself in PlayStation hall of fame.

There have been many ups and downs along the way, as Insomniac Games has sometimes stepped away to let other developers handle the property.

That said, many PlayStation fans still have fond memories of playing standout entries like Going Commando and Up Your Arsenal.

With Ratchet & Clank: Rift Apart launching on the PlayStation 5, we thought we’d cover the shooter’s history by listing all of the Ratchet & Clank games in order of release date. 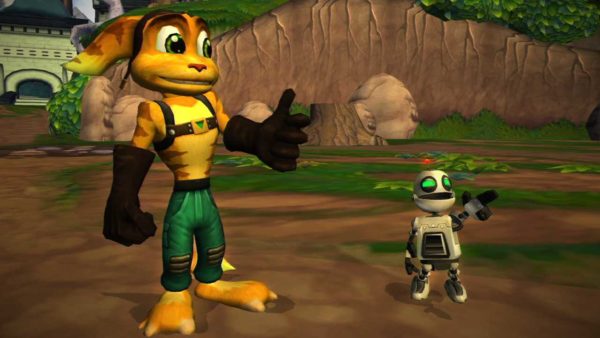 When Insomniac Games set out to make the first Ratchet & Clank, they had no idea the series would eventually become synonymous with the PlayStation brand.

Launching for the PS2, the original introduced players to a lonely Lombax mechanic named Ratchet and his robot sidekick Clank.

The two embark on an intergalactic adventure to save the universe from a shady businessman looking to build his own personal haven at the cost of destroying other planets.

Gameplay was a mix of 3D platforming, shooting, puzzle-solving, and even included some RPG mechanics.

At the time, there was simply nothing else like it. Despite some camera issues, Ratchet & Clank was well-received upon release, with critics praising its story, tone, and overall originality. 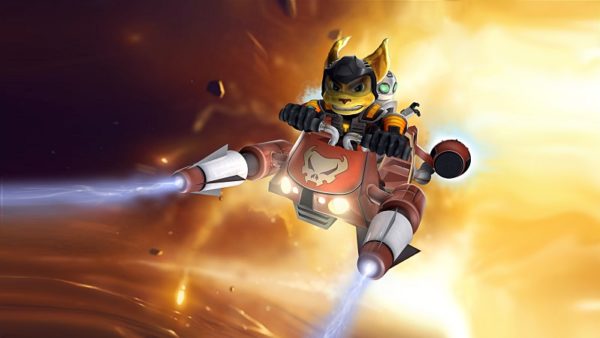 Going Commando was bigger and better than its predecessor in just about every way and benefited from a host of story and gameplay improvements.

For one, Ratchet’s personality was revised to make him more appealing to fans and sell the idea of him and Clank being this ragtag team of do-gooders.

However, what really got players’ attention was the addition of racing challenges and advancements in the game’s combat system.

The story sees the dynamic duo momentarily separated after Ratchet is recruited to become a mercenary for Megacorp.

Assigned to track down a thief who stole a biological experiment, Ratchet begins to question Megacorp’s intentions, eventually reuniting with Clank to expose the truth. 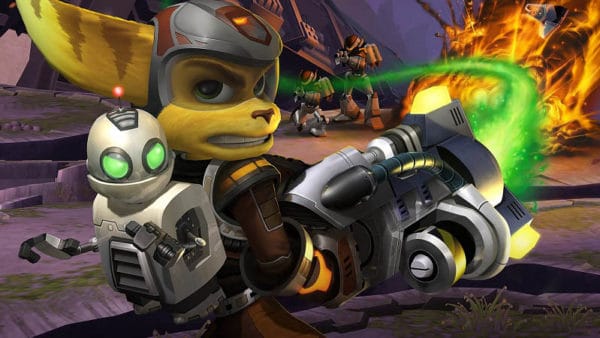 Ratchet & Clank: Up Your Arsenal

The third entry in the series took things even further than Going Commando by giving players more features than they knew what to do with.

This included a much larger and ambitious campaign that saw the duo battling a mad scientist by the name of Dr. Nefarious.

New characters and planets were introduced and the story took on a much darker, grittier tone than previous games.

Most notably, Up Your Arsenal added a multiplayer component that saw teams competing across various modes such as Capture the Flag and Team Deathmatch.

Players were given a wider selection of upgradeable weapons and gadgets, as well as larger environments to allow for new ground and air vehicles. 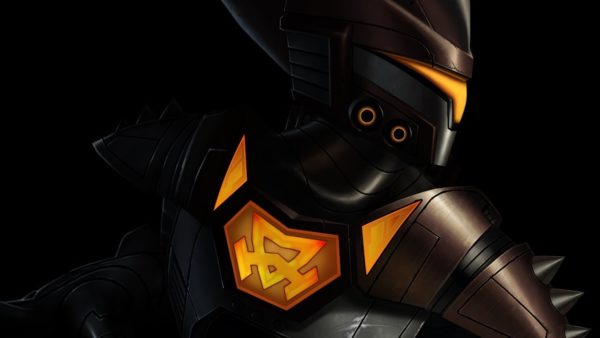 Taking Up Your Arsenal’s dark tone even further, Ratchet: Deadlocked stands out in comparison to the original trilogy.

For one, it plays less like an action-platformer and more like a survival shooter, as Ratchet finds himself kidnapped and forced to compete in a gladiator game show called the Dread Zone.

Clank is given less screen time in the single-player campaign, resulting in fewer platforming and puzzle sections.

While Deadlocked is praised for its visceral combat and weapon customization, it’s also criticized for lacking its predecessor’s spirit and vigor. 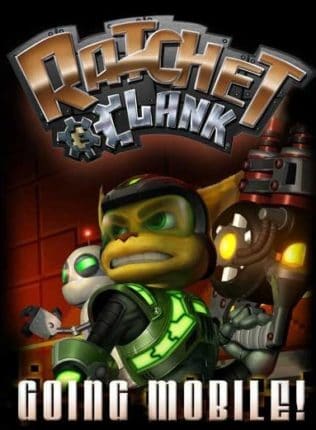 The story sees Ratchet and Clank accidentally triggering a bio-matter converter device, transporting them to an alternate dimension.

It was a smart in-universe way to justify the game’s 2D perspective and does an excellent job separating itself from Insomniac’s 3D games.

Gameplay was a mix of light platforming and basic combat. Players were able to upgrade weapons and purchase new ones from an in-game shop.

While its features were limited by mobile hardware at the time, Going Mobile managed to snag the award for “Best Action Game” at the Mobile Entertainment Awards in 2006. 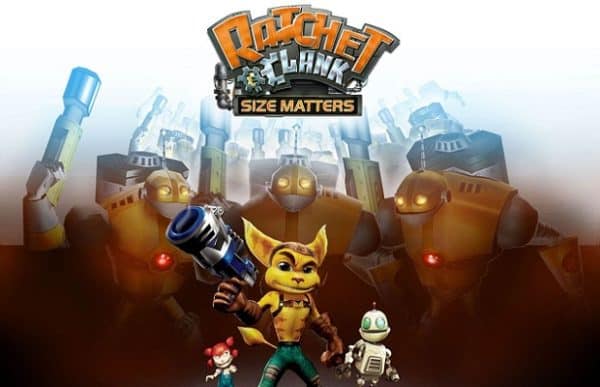 Despite being made by a different developer, High Impact Games, Size Matters is considered canon, at least according to Insomniac.

Initially released for the PlayStation Portable, the game presents a traditional Ratchet & Clank adventure, only on a smaller scale due to the PSP’s limited capabilities.

In it, Ratchet and Clank are seen vacationing on an alien planet where they witness a girl get abducted by mysterious robots.

The duo set out to investigate the kidnapping and stumble upon a galactic conspiracy involving multiple worlds and a strange mythological race of alien robots called Technomites.

Gameplay was very much inspired by Up Your Arsenal with new armor and weapon systems as well as a new Shrink Ray gadget that let Ratchet and Clank reach certain areas. 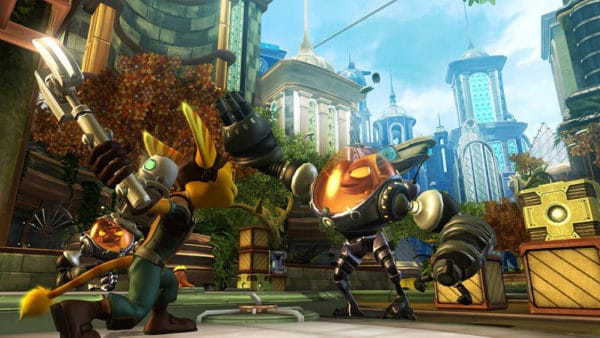 Released just a year after the PS3, Future: Tools of Destruction saw Insomniac Games back at the helm for a new Future trilogy of games.

The timing couldn’t have been any better, as Sony’s new hardware allowed them to make bigger, more detailed environments, as well as incorporate new gameplay mechanics using the PS3’s Six-axis tilt functionality.

The story follows Ratchet and Clank as they look deeper into their pasts and try to uncover the “Lombax Secret” that can help defeat Emperor Tachyon before he can destroy Ratchet, who we learn is the last remaining Lombax.

The game is remembered for its brilliant writing and numerous pop culture references, such as the rivalry between Sony and Microsoft.

The addition of larger, more engaging levels was championed by fans, signaling Insomniac and Sony had a success on their hands. 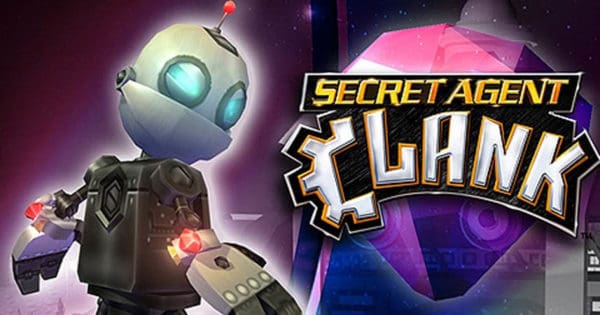 High Impact Games was tapped to work on the next game, Secret Agent Clank, for the PSP.

As its title suggests, the game shifts its focus from Ratchet to Clank as the robot embarks on a spy-themed adventure set within the in-universe fictional holo-vision series “Secret Agent Clank.”

The story sees Clank on a mission to prove Ratchet’s innocence after he’s framed for stealing an Eye of Infinity from the Boltaire Museum.

Meanwhile, Ratchet is locked away in a Prison Planet, where he’s confronted by many of his former adversaries.

One of the main criticisms directed at Secret Agent Clank is how little it tries to incorporate Clank’s unique abilities; instead, they decided to have the character simply inherit most of Ratchet’s move set. 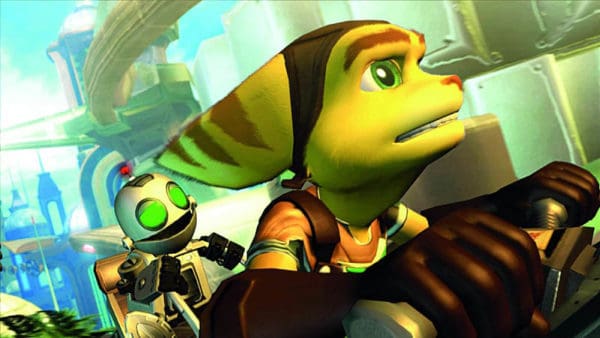 The second game in Insomniac’s Future trilogy, Quest for Booty, is a much shorter affair than previous outings and was primarily sold as a digital download title via the PlayStation Network on PS3.

Set after the events of Tools of Destruction, the game sees Ratchet on a search and rescue mission for Clank after he’s taken by the Zoni.

While the quality and writing were on par with earlier games, Quest for Booty was somewhat marred by its abysmal campaign length, clocking in around three hours.

However, some advantages came with the size cut; the game was able to maintain consistent, tight pacing that went over well with fans.

Additionally, many of the weaker weapons from Tools of Destruction were removed, and Ratchet was assigned a new kinetic Omni Wrench that allowed him to move and manipulate objects. 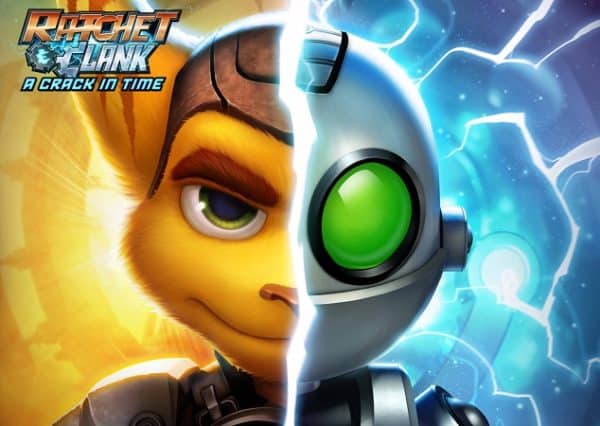 Wrapping up the Future trilogy, A Crack In Time is considered the best entry in the series in terms of story quality.

Taking place directly after Quest for Booty, it sees Ratchet much closer to finally rescuing Clank, who is now being held prisoner by Dr. Nefarious.

Working independently for most of the game, the duo eventually reunites to stop Dr. Nefarious from using the Great Clock to manipulate time and space.

It was a satisfying conclusion to the trilogy that expanded upon the duo’s relationship and personal history.

On the gameplay front, A Crack In Time benefited from a host of quality of life improvements, such as the freedom to use Ratchet’s ship whenever you want and expanded weapon customization. 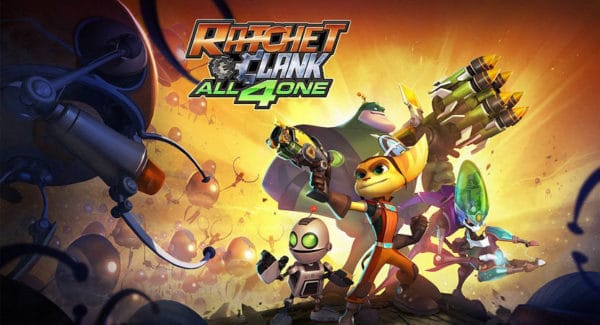 The next entry in the series is All 4 One, a co-op-centric affair that sees Ratchet, Clank, Qwark, and Dr. Nefarious working together to bring down a new threat.

Called the Ephemeris, this drone was programmed to find and capture the most powerful beings in the universe.

Players could take advantage of drop-in drop-out 4-player co-op, with each player assuming control of one of the four protagonists.

Despite being categorized as a spin-off, All 4 One was the handy work none other than Insomniac Games.

Reviews were mixed at launch, with some admiring the addition of co-op while others took aim at Insomniac’s lazy implementation of the feature. 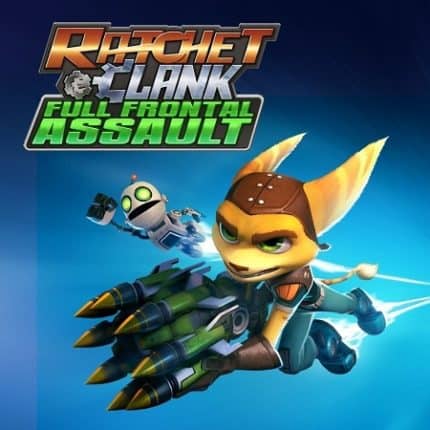 Arguably the lowest point in the series, Full Frontal Assault is a good example of Insomniac trying to fix what isn’t broken.

No doubt fueled by a desire to branch out and do something different with the franchise, Insomniac decided to incorporate tower defense mechanics into the next Ratchet & Clank.

And just like with All 4 One, players were not happy with the final results, taking shots at the tower defense system’s clumsy design. unbalanced resource economy, and limited map selection.

While it featured three playable characters: Qwark, Ratchet, and Clank, only two could be selected at any given time.

The concept of having to defend and hold one position simply didn’t fall in line with the series’ core gameplay loop, resulting in Full Frontal Assault receiving mixed reviews. 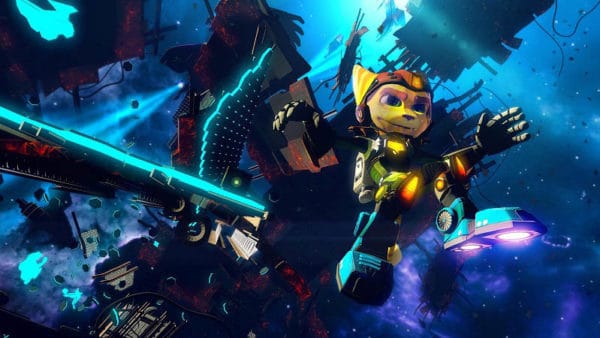 Ratchet & Clank: Into the Nexus

Serving as an epilogue to the Future trilogy, Into the Nexus was Insomniac’s latest attempt at appeasing fans by returning to the series’ roots.

The story sees Ratchet and Clank assigned to an escort mission that inevitably goes awry, releasing a dangerous race of interdimensional beings into the galaxy.

Additionally, there was a narrative focus on Ratchet coming to grips with his actions in A Crack in Time.

One of Into the Nexus’ highlights is the addition of new side-scrolling sections that see Clank manipulating gravity to complete his objectives.

Ultimately, the game was a great send-off for the PS3 console and managed to capture the feeling of the original trilogy with its memorable story. 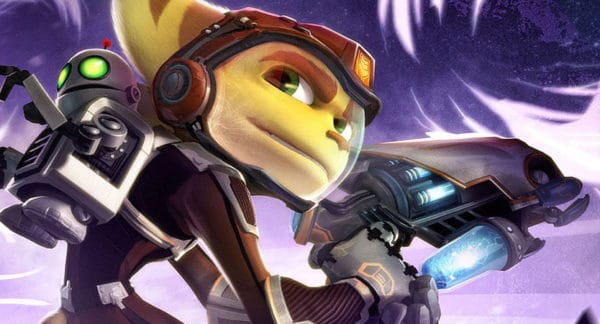 Ratchet & Clank: Before the Nexus

Looking to cash in on the hype surrounding Into the Nexus, Sony tapped Darkside Game Studios to create a mobile game tie-in.

They came back with an endless runner modeled after the popular Temple Run series that was loosely based on the events in Insomniac’s game.

Before the Nexus sees players controlling Ratchet as he occupies one of three lanes, typically presented as grind rails.

You would switch between lanes to dodge enemies and collect resources as well as occasionally shoot enemies. 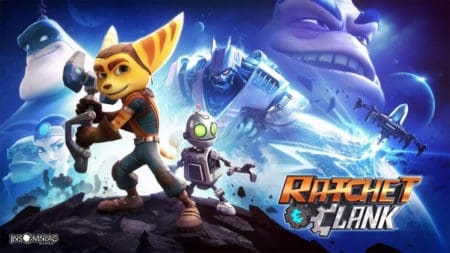 Going by the same name, 2016’s Ratchet & Clank for the PS4 serves as both a reboot and reimagining of the first game in the series with upgraded graphics and new dialogue.

It’s based on the Ratchet & Clank movie, which sought to retell the events of the original game from 2002.

Told from the perspective of Captain Qwark, the story sees Ratchet and Clank meeting one another for the first time.

Eventually, the duo team up with the Galactic Rangers and work together to stop Chairman Drek and Dr. Nefarious from destroying planets throughout the galaxy.

The game was well-received by critics and longtime fans, with many citing its perfect balance between combat, platforming, and puzzle sections. 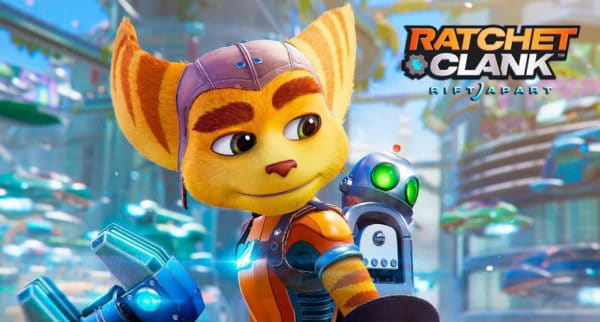 Ratchet & Clank: Rift Apart is a continuation of the reboot’s updated graphical style and harnesses the increased horsepower of Sony’s PS5 console.

In it, a failed attempt at using the Dimensionator on Ratchet and Clank by Dr. Nefarious causes portals connecting different worlds to go haywire and begin opening and closing at random.

With their own world caught in the crossfire, Ratchet and Clank set off on a mission to save the worlds from collapsing into each other.

Rift Apart retains many of the gameplay elements from previous entries while introducing new features such as the playable female Lombax named Rivet.

These updates were worth the trouble, seeing as Rift Apart received generally favorable reviews praising its animation quality, combat, and detailed environments. 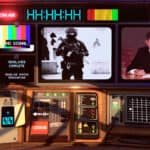