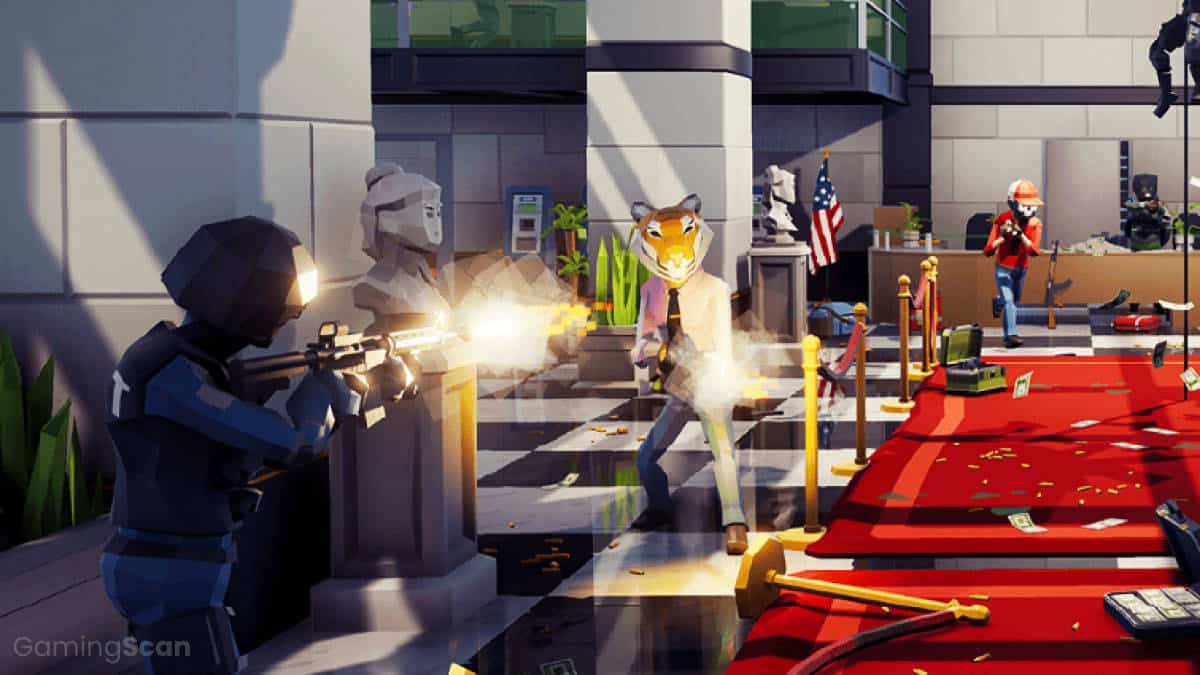 If you’ve ever wanted to role-play as a super-spy or a stealthy criminal tasked with stealing some priceless artifact or work of art, then heist games are the perfect outlet to do so.

Whether you prefer to work with a team or pull off capers completely alone, tons of great games let you plan out your next big score and become the ultimate thief.

In this list, we’ll highlight the best heist games to play in 2023, including the best new heist games on Steam, PlayStation, Xbox, and Nintendo Switch.

We’ll be updating this list in the future with new titles, so make sure to check back and let us know if we missed any of your favorite heist games!

The Greatest Penguin Heist of All Time

The Greatest Penguin Heist of All Time is our first heist game recommendation and centers on a gang of adorable penguins with kleptomaniac tendencies.

Inspired by old-school stealth and heist games, it sees up to 4 players coordinating to complete their mission via strategic planning and some improvisation.

Each run sees you picking your mission and loadout before setting off to infiltrate, steal, and escape before the enemies know what hit them.

The game features a modern physics engine along with unlockable clothes/skins and a wide variety of tools and gadgets that make you feel like the ultimate thief.

Currently in Steam Early Access, Teardown is a sandbox heist game that offers a fully destructible, voxel-based world for players to blow up however they see fit.

In it, you play as the owner of a construction company that’s fallen on hard times, forcing you to take on increasingly sketchy jobs ranging from car theft to demolishing entire buildings.

Scenarios can be tackled in a number of ways depending on your tools of choice and whether or not you manage to avoid alerting the authorities.

Beyond this, Teardown offers a full-fledged sandbox mode that lets you play around with unlimited resources without worrying about raising any alarms.

Picklock is a fantastic stealth heist game that manages to leave a lasting impression despite its relatively short campaign.

In it, you take on the role of a hot-shot thief looking to escape his life of crime and start fresh in retirement by saving up money from increasingly high-stakes scores.

The game features surprisingly deep gameplay systems that allow you to tackle missions from multiple angles and provides incentives for completing bonus objectives and challenges.

As you bring in money from local pizza joints, movie theaters, clothing stores, and nightclubs, you’ll have the option to hoard your riches until you can retire or spend it all on fancy cars and luxury homes.

Next up is Perfect Heist 2, a round-based online game that gives you the choice of playing for the cops or robbers team.

Players who join the robbers will have to find a way to infiltrate the bank by blending in with a crowd of customers while the police try to sleuth them out.

There are several ways to go about completing your mission, such as stealing a bank employee’s uniform, hacking computers, sneaking past security, and more.

This is a great game to play if you love online PvP shooters, games of hide and seek, or social deduction games like Among Us.

For more co-op heist fun, we suggest checking out Operation: Tango, a spy-themed co-op game set in a high-tech future where agents and hackers have advanced tools at their disposal.

Armed with these gadgets, two players work together to infiltrate locked-down facilities and retrieve precious intel that will save humanity from an evil conspiracy.

The game is strictly online-only and must be played using a microphone to communicate with your partner in crime since most tasks require the agent and hacker to work together.

Operation: Tango uses a similar content model as games like It Takes Two or A Way Out, where only one person has to own the game for the other player to join using a Friend Pass.

Rubber Bandits is a part-heist part-brawler action game that sees a group of thieves working together to pull off their biggest score yet.

From a gameplay perspective, Rubber Bandits is similar to games like Gang Beasts where you’re encouraged to pummel your friends using wonky physics-based attacks, weapons, and gags.

Additionally, the game features a decent number of modes and heist levels to pick from along with various customization options to make your thief stand out from the competition.

Monaco: What’s Yours Is Mine

Next, we’re recommending Monaco: What’s Yours Is Mine, a neon-drenched, top-down co-op heist game where your vision is limited to your character’s line of sight.

In it, up to 4 players must put their wits together to pull off a series of scores involving robbing banks, museums, and police stations.

Before each mission, players are given a blueprint containing important info needed to complete the heist and must decide the best class for the job at hand.

The game’s campaign includes four separate acts, each told from the perspective of a different crew member, and can be tackled either solo or with friends via online/local co-op.

Between Time is an escape room puzzle game that sees your character traveling through space and time to retrieve priceless treasures from mysterious locations throughout history.

After stealing a time machine, you’re transported to one of five rooms set during different points in human history and must solve logic-based puzzles to obtain your reward and escape.

The game also features an actual story that sees you uncovering a mystery surrounding the time machine itself.

If you’ve ever wanted to play as a burglar, Thief Simulator delivers on that promise in spades while also providing you with opportunities to put your criminal skills to the ultimate test.

In it, you’re tasked with robbing the most secured homes in the neighborhood by scouting out locations, monitoring your targets’ comings and goings, and equipping the best hi-tech burglar equipment.

Once you’ve planned out your approach, there’s nothing left to do but sneak your way in and grab as many possessions as you can before the victim comes home or the police are alerted.

Any goods you’ve stolen can be sold to a local pawn shop in exchange for more cash to unlock new gear and advance your criminal career.

Set during the 1970s, Crookz: The Big Heist sees a crew of thieves pulling off a series of small heists leading up to one big score to get revenge against their former crewmate.

Players are tasked with customizing a team of crooks with unique skills and tools that prove useful for carrying out different tasks during dangerous missions.

Gameplay uses an isometric perspective camera and incorporates elements of strategy where the player must decide where to place each character and select their actions for each turn.

The game leans heavily into its 70s aesthetic complete with funky music and dialogue, groovy environments, and tons of clever little nods to the time period.

Speaking of heist games with unique settings, The Swindle is an indie stealth-action RPG that takes place in a steampunk-inspired London during the 1800s.

In it, you’re tasked with stopping Scotland Yard from deploying a cutting-edge AI known as The Devil’s Basilisk that has the power to put an end to crime for good.

With just 100 days to go before the final heist, you’ll have to steal as much loot as you can from randomly generated levels with increasingly tight security.

Every time one of your characters is caught or killed, the game swaps them out with a new thief while retaining any skills or equipment you previously unlocked.

Next up is Quadrilateral Cowboy, a cyberpunk heist game developed by Blendo Games that sees you hacking into locked-down facilities as part of a three-person crew.

The hacking part is a bit less involved than similar games, with your character only having to type in basic lines of codes to lift the curtain and get your people inside.

Over the course of ten jobs, you’ll steal a wide selection of goods, ranging from confidential documents to safes containing piles of money.

However, you’ll have to be careful not to trip up security systems with your hacking deck and grey-market equipment before you can claim your reward and sell it to the highest bidder.

This list wouldn’t be complete without mentioning one of the best open-world heist games on the market, Grand Theft Auto V and its online mode, GTA Online.

Heists are first introduced in the single-player story in which players must pull off five big jobs using the game’s three protagonists, with some flexibility to decide how to approach each mission.

However, in GTA Online, there are eight heists to complete with 2-4 players assigned to different roles decided during an extensive planning phase.

In both versions, the outcome of each heist is reliant on how players choose to approach each obstacle, including their grand escape with the stolen goods.

Another heist classic, Payday 2 sees you and your crew choosing robbery jobs from a system called CRIMENET before setting off to drain jewelry stores, banks, and art galleries for all they’re worth.

These high-profile missions can be tackled cooperatively with up to three other players or completely solo using AI-controlled crewmates.

Since its release, Payday 2 has been continually expanded via DLC add-ons that introduce new weapons, maps, cosmetics, and game modifiers.

Additionally, many of the game’s expansions act as crossovers with other heist-related video games and movies, allowing you to pull off jobs with criminals from your favorite franchises.

Last but not least, The Marvellous Miss Take is an indie stealth-action game that uses an isometric perspective camera and traditional mouse controls.

In it, you follow a team of three thieves as they attempt to recover a stolen art collection while avoiding enemy guards across 25 increasingly difficult levels.

Each thief comes equipped with a special set of skills, strengths, and weaknesses that affect how you navigate each level as well as complete your tasks.

The game features an exciting and upbeat soundtrack that’s further complemented by vibrant visuals and animations to create a welcoming atmosphere designed to bring out your inner art thief. 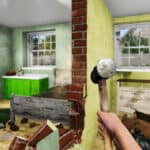