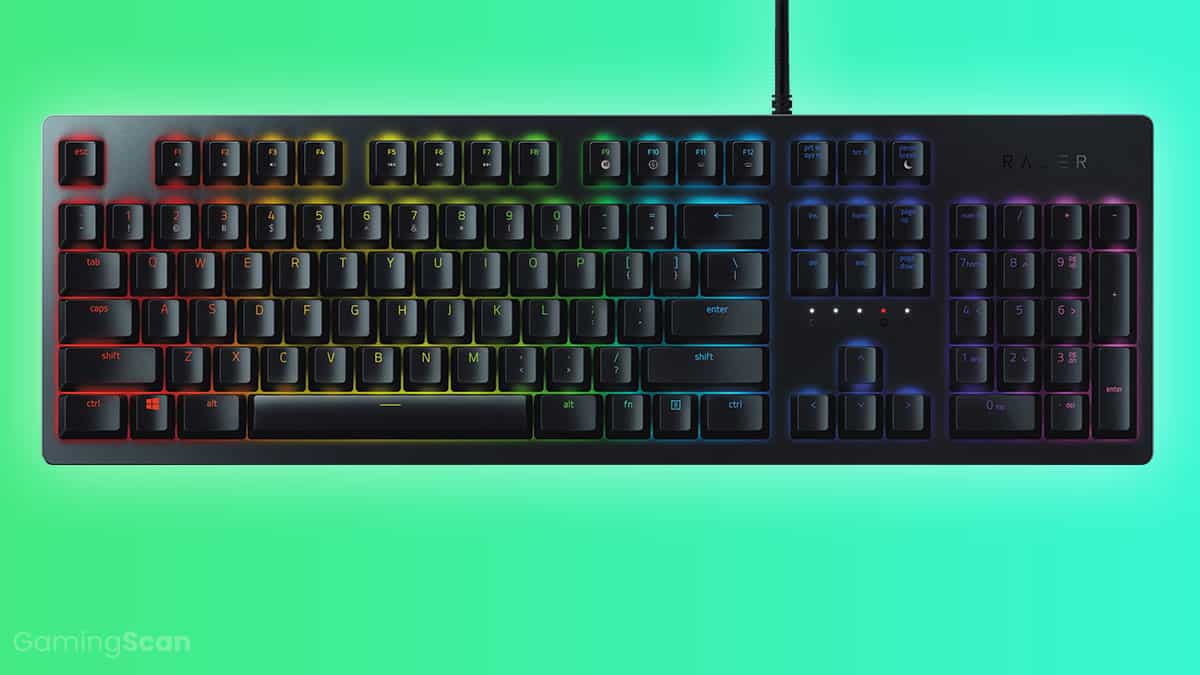 Gaming keyboards are a hot debate among the members of the gaming community. Is one type of keyboard capable of improving your gaming performance? Will this type of switch let you get that attack or shot off just a tad faster?

In the world of gaming, the keyboard (and the mouse, to some extent) is your direct interface with the game world, so things like comfort, speed, and accuracy are paramount. Looks are important too.

Optical keyboards are a relative newcomer to the keyboard scene, but they’re widely regarded to be the peak of performance in mechanical keyboards. This is because they use a laser to control the actuation sequence, and the signal travels at the speed of light.

In the buying guide below, we’ll compare some of the best optical keyboards available today to help you find the best ones for gaming. 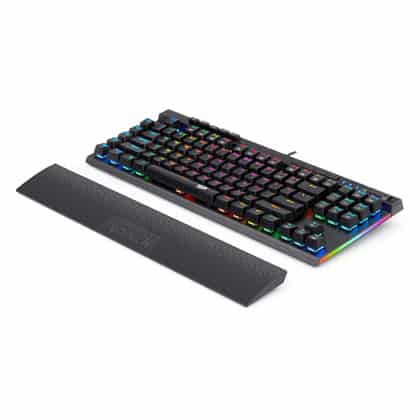 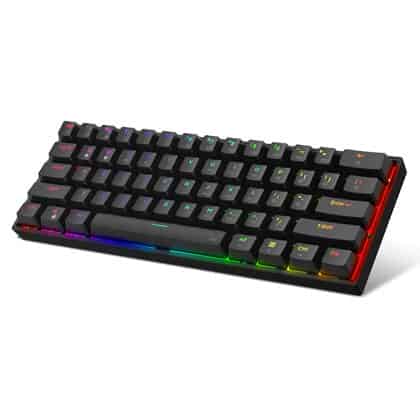 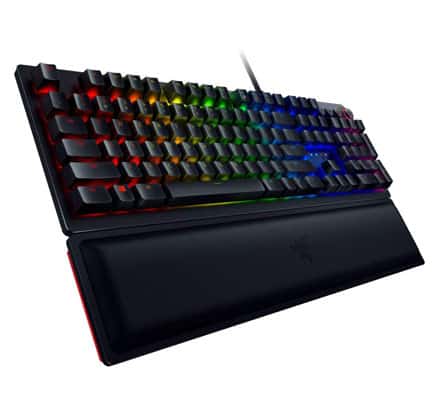 Starting off our list is the very affordable GK61 from HK Gaming. Like the other keyboards in our list, this is an RGB LED-lit keyboard, and it has what are called “mechanical-optical” switches. Like we went over above, these switches use a light-based actuation function instead of a physical one.

Unfortunately, this keyboard doesn’t have effective stabilizer legs, which will make an enormous difference for anyone attempting to type effectively on it. While it doesn’t get in the way of the function of the keyboard overall, it’s not particularly comfortable, and it feels a bit cheap. It kind of lessens the experience of the keyboard as a whole.

This keyboard does come in a good variety of options, though. In addition to choosing from four different optical switches, you have the choice of a red or white keyboard, too. For such a low price, this is a surprising level of customizability.

Additionally, the RGB software for this keyboard is abysmal. Most of it isn’t translated from Chinese to English, and it’s not user-friendly in the least. If you can figure out how to muddle your way through the software, it’s not a functionally bad keyboard, but you can definitely get a more user-friendly experience for the same price or not much more.

You could argue that the Razer Huntsman was the first “big” tech brand to bring optical-mechanical switches to the gaming scene. Indeed, the Razer Huntsman Elite is a fully-featured keyboard designed with all of the bells and whistles for gamers. If you have a PC, you’ve most likely heard of Razer at some point. You might also own a Razer product or two.

While the other brands featured in this guide are what you might call “off-brand” companies, Razer has an enormous following and has a large headquarters in the USA. While you’re going to pay a premium for their products, as a result, you can rest assured that you’ll get quality to go along with that.

This version of the Razer Huntsman, the Elite, is a full-sized keyboard, and it comes with a magnetic wrist rest. In our experience, the wrist rest isn’t the most comfortable we’ve tried; it has a somewhat abrupt edge on the near side that can make it uncomfortable for some people. It all depends on how you sit while you game or type.

Unlike the other keyboards on this list, Razer produces its own proprietary switches for the Huntsman Elite. It uses something called a Razer Opto-Mechanical switch, and these switches come in both red and purple. The purple switch is more similar to a blue switch, with a noticeable clicky and tactile feel, while the red switch is similar to a Cherry MX red switch, linear and nearly soundless.

For those who like all of their buttons to be on their keyboard, the Huntsman Elite will not disappoint. Volume and playback keys are located on the keyboard along with the full keyboard itself.

Razer’s Synapse software is legendary for customizability in the gaming industry, and this is no different for the Huntsman Elite. The software comes full of convenience features such as dedicated “gaming modes,” macro creation, and highly customizable light functions.

Clearly, this is a premium item, as you’ll pay a steep price for all of these extra characteristics. However, that quality and customizability will be worth it for many buyers – as long as they can afford it, that is. While the Huntsman Elite is only available in black, you can get it in white or pink by downgrading to the standard Razer Huntsman.

This 60% keyboard from DIERYA x KEMOVE is another off-brand keyboard but at a very reasonable price. It ties with our first keyboard for affordability, but it has some clear advantages and weaknesses when you compare the two.

For one, the customization software for this keyboard is much more user-friendly. It’s not as accessible as Razer’s software, of course, but it’s leagues better than HK Gaming’s software. However, as a trade-off for that, the RBG lighting itself isn’t as bright as some other models on this list. If you’re looking for bright, visible LEDs, this isn’t the keyboard for you.

That being said, this is still a very functional 60% keyboard. It feels nice to type on, and it doesn’t look much like a cheap keyboard, either. One pleasing thing that we noticed is the lack of evident branding that some keyboards, such as Redragon models, have.

There’s nothing wrong with the optical switches on this keyboard, but they don’t really stand out. This keyboard uses the Gateron optical-mechanical switches just as our first keyboard does. You also have the choice between black, brown, blue, and red optical switches. You have no choice of keyboard colors, which is a letdown, but not a huge one.

If you’re looking to get a Razer keyboard at a more affordable price, you should give the Huntsman Tournament Edition some thought. This keyboard is meant to pack all of the features of the Elite into a smaller, portable, affordable package, and it succeeds decently well at this.

This keyboard doesn’t come with a magnetic wrist rest, but we can’t say we miss it all that much. However, do keep in mind that, while we’ve only included the Huntsman Tournament Edition and the Huntsman Elite in this list, all of the Razer Huntsman keyboards have optical-mechanical switches.

One thing to note about the Huntsman Tournament Edition is that it’s designed specifically for tournament gamers. As such, it’s only available with red linear switches. If you’re looking for purple tactile switches, you’ll have to upgrade to the original Huntsman or the Huntsman Elite. The Tournament Edition also only comes in matte black – no white or pink options here.

The rest of our list is rounded out with Redragon products. Redragon has been a strong producer of mechanical and membrane keyboards for several years, despite being a brand of Chinese origin. While its quality doesn’t always measure up, their products are often excellent value for the price.

As such, our first Redragon optical-mechanical keyboard is the K580-PRO. The K580-PRO is an LED-lit full-size keyboard with OUTEMU switches, and you have the choice between brown and blue. Blue switches have a highly tactile feel, while brown switches have a feel that’s somewhere between linear and tactile.

This is a full-size keyboard, so it has got all of the extra function keys and media control buttons that you could ever want. However, it does have a larger form-factor. That being said, though, the quality of this keyboard is surprising. It feels heavy and sturdy, and it might trick a less-knowledgeable person into thinking it costs quite a bit more than it does.

Additionally, the price of this keyboard is incredible for a full-sized keyboard. While it doesn’t come with a magnetic wrist rest, it’s less than half the price of the Razer Huntsman Elite. The font on the keys and the Redragon branding on the keyboard itself are a bit unattractive to us, but that’s a small price to pay for the value you get.

The Redragon K587-PRO is a very similar model to the K580-PRO above, but it’s a tenkeyless model instead of full-sized. However, this keyboard also only comes with blue switches – there’s no red or brown option available at the time of this writing.

Of course, you could very easily order your own optical switches and swap them out, but this would increase the overall price significantly.

Interestingly enough, this mechanical keyboard does come with a magnetic wrist rest. And, unlike Razer’s wrist rest, this one is properly designed without a hard rear edge to irritate your wrists.

Fans of wrist rests will appreciate this design. While this keyboard only comes in black just like the other Redragon, that’s what the majority of gamers will be buying anyway.

The cost of the K587-PRO is more or less equivalent to the price of the K580-PRO above, but with different features. You get a smaller keyboard, but you also gain the extra wrist rest.

While consumers don’t have a massive selection of optical-mechanical keyboards to choose from just yet, there’s still a decent selection here to take your pick from. We think it’s pretty clear what the winner is from among all of these options, though. Did you pick the Redragon K587-PRO as well?

We like the K587-PRO as the all-around winner, even though it’s a tenkeyless keyboard because it hits an excellent middling point between price, quality, and features. While it could come with a few more switch options, it’s an incredibly functional keyboard for a great price. It feels much more expensive than it actually is, too.

The Razer Huntsman Elite, however, is your best option if you want all of the bells and whistles and don’t mind paying for them. Despite the wrist rest suffering from some design flaws, the keyboard is functional, sturdy, and most of all, beautiful. Additionally, since it’s from Razer, you know you’ll be getting an excellent product that’s been peer-reviewed by many consumers.

However, if you’re set on a white keyboard, the HK Gaming GK61 isn’t a bad alternative – you might just need to wade through some clunky software to get it to look the way you want.

Truly, all of the keyboards in this round-up are great options, and you can’t go wrong with any of them. When you have an optical-mechanical keyboard, regardless of who makes it, you’ll know you have the very best quality regarding speed and actuation available today. You’ll have the satisfaction of knowing you were one of the first to jump on the optical-mechanical bus, too! 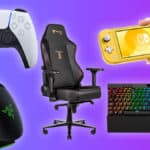