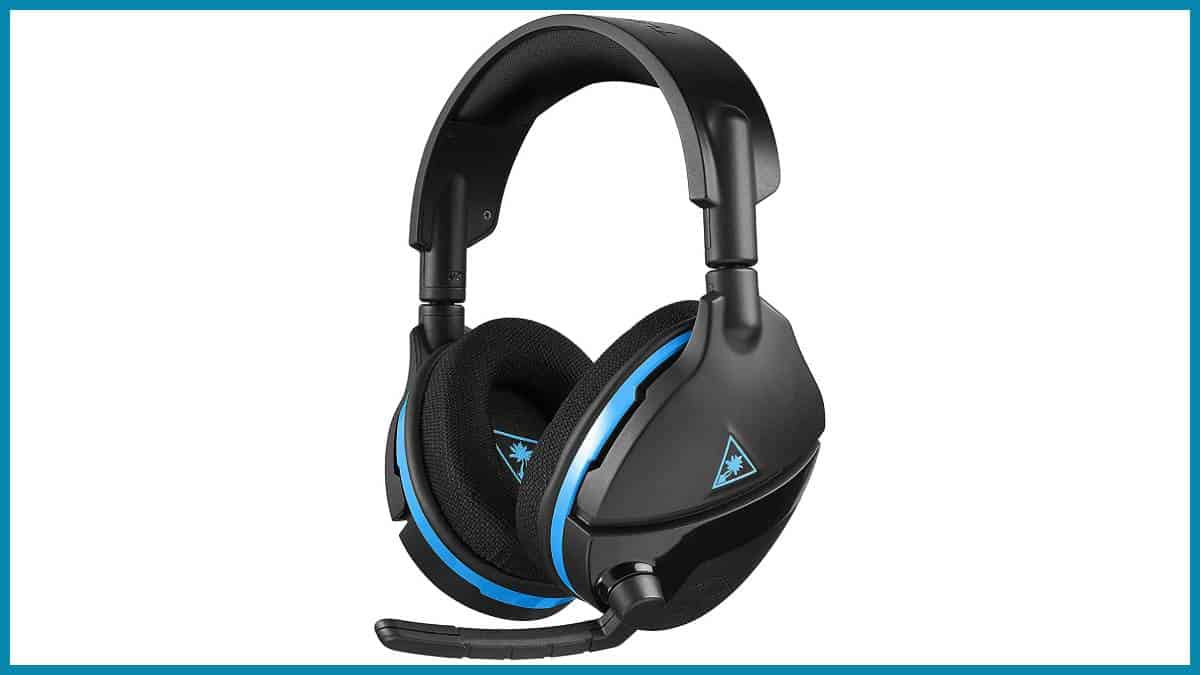 The Turtle Beach Stealth 600 is a weird entry as far as wireless gaming headsets go.

For every pro in its design – and there are certainly some hard-hitting pros like the superb sound quality and well-crafted microphone – there’s an equal and opposite con to balance things out.

So while there’s a lot to love here, there’s also a lot that can persuade you against buying it, like the weird VR-friendly build that makes it so the headset constantly feels like it’s going to slip off your head.

Turtle Beach may not be the massive beast it once was, but it’s still a very respectable brand name that many gamers hold in high regard. So to see them release a wireless console headset for under $100 brought tears of joy to console fans everywhere.

However, a manufacturer can only do so much when designing a product for this price range, so let’s see how Turtle Beach handled this predicament with their Stealth 600 headset.

Quick disclaimer: There is also an Xbox variant of this headset, but in this review, we’ll only be looking at the PS4 variant.

Right off the get-go, we are treated to a very divisive design. The angular aesthetic of the Stealth 600 has a distinctly and aggressively gaming look to it. This type of aesthetic is loved by some, although we can’t help but notice that manufacturers have been stepping away from it recently.

Of course, there’s no point in discussing taste, but we feel that it’s a bit easier to forgive the Stealth 100’s look even if you’re a fan of inconspicuous designs just because this headset was made to look fantastic in a PS4 ecosystem and it accomplishes this brilliantly.

The black and blue color scheme captures the quintessential PS4 vibe, and the headset is also available in white and blue for all you fans of the white PS4. (When we say PS4, we also mean the Pro version, just to be clear.)

Regardless of whether you love the design or not, you likely aren’t going to feel too impressed with how the Stealth 600 feels. This is an all-plastic headset, and the plastic, in this case, doesn’t feel very premium. You could say that this is to be expected from a $100 headset, and you’d have a point. We’d be lying if we said we hadn’t seen headsets in this price range that feel more well-made, but this isn’t a deal-breaker.

What might be a deal-breaker, however, is the overall weird fit of this headset. The Stealth 600 is, first and foremost, a PS4 headset. And the PS4, of course, supports the PSVR headset. So whoever was making this headset must’ve thought it’d be a grand idea if the Stealth 600 was designed so that you could comfortably wear it even when you’ve got a VR headset mounted on your head. And yes, the two go together quite well.

But let’s face it, even gamers who own VR headsets don’t use them all the time when gaming. And the vast majority of PS4 users don’t have the PSVR in the first place. This makes it rather irksome that you have to suffer one of the downsides of this design philosophy, namely that the headband of the Stealth 600 rests a bit behind, whereas all other headsets would on your head. The result is that you get this feeling that the headset is going to fall right off.

Now, to its credit, this doesn’t actually happen. But it feels like it will, which is not a pleasant feeling. Imagine if your pants felt like they were loose around the waist all the time – you probably wouldn’t enjoy wearing them even though they don’t fall off ever.

If feels like we’ve been ranting about how uncomfortable this headset is for a while now, but that’s not necessarily the case. If you can get used to the feelings mentioned above then there’s a lot to appreciate here.

The headset is light, it has thick and breathable padding on both the headband and the earcups, and it doesn’t press into your head at all. In fact, we could’ve gone with a bit more clamping force, if we’re honest, since the lack of it only contributes to the feeling that you’re not really wearing this headset so much as just having it sit on your head.

Regardless, it’s definitely not uncomfortable in the sense that it produces ear pain or ear sweating. It’s a headset that you could wear for hours on end without any issues of that variety. It’s just that the fit is a bit awkward, or at least different from what you’re probably used to.

On the upside, the Stealth 600 does feature the ProSpecs Glasses Relief System, which can be a real lifesaver for any bespectacled individual. It’s a relatively simple design – the cushioning is way softer in the middle of the earcup where the temples of the glasses would be so that the headset exerts less pressure there.

If you wear glasses all the time, then this is a unique feature that you should always be after. Even if you decide that this headset isn’t right for you, we strongly encourage you to look at the selection of all headsets that have this feature and pick one of those, as it truly is that helpful and customizable feature.

In terms of features, you don’t get a lot, but that’s to be expected from this price range. However, the core features all range from serviceable to great.

The best thing about the Stealth 600 is how effortless it makes connecting a wireless headset to your PS4. You just plug the dongle you get with the headset into the console, and that’s it. It’s not some sort of pseudo-wireless experience that most PS4 fans are stuck with where you still have to connect your headset to the controller, no – this is the genuine wireless deal.

The signal range isn’t phenomenal, but it holds up quite well at about 20 feet, and it’s hard to imagine a console gaming scenario where this wouldn’t be enough. And the 15-hour battery life is great for the price.

However, this dongle is also pretty much the only means of connection you’ll have available. There’s no 3.5mm input of any kind. So if you plan on connecting this headset to your smartphone, say between online matches for a quick song, you’re not going to be able to do that. The Stealth 600 is a PS4 and PC headset only.

Now, if you use the charging cable to connect to the PC, you’ll get access to the Turtle Beach Audio Hub, which you can use to customize the equalizer and volume settings. It’s a rather barebones software, but the customization options are certainly appreciated nonetheless. You’ll also get your chance to peruse the software regardless of whether this is something you’re a fan of since connecting the headset to the PC is also the only way to update the firmware.

As for the microphone, we can’t say that it’s amazing, but it still offers great bang for your buck.

Furthermore, while there’s no pop filer of any kind, the microphone is far back, enough that it doesn’t suffer from popping noises or even implosive sounds. This solution does carry the drawback of making your voice a bit quieter than normal, but it’s still rather clear. We were also quite impressed with how it managed to eliminate unwanted background noises.

All in all, it’s a decent microphone – not the best one we’ve seen in this price range, but certainly good enough that you’ll never feel like you’ve been cheated out of your $100. And the headset even offers some neat features to enhance the experience.

For example, there’s active voice monitoring, so you can always check whether the volume you’re speaking at is appropriate. Additionally, there’s a mic wheel on the ear cup. It’s a bit clunky to use in the heat of the moment since it’s located right next to the volume wheel, which makes mistaking one for the other something that could happen at least a couple of times.

Nevertheless, this all goes to enhance the mic-using experience with the Stealth 600.

And finally, there’s the sound.

And as you can see, we’ve had several gripes with the Stealth 600 so far. But there’s nothing bad we can say about the audio quality here. It’s an all-around great-sounding headset.

And even though versatility is one of this device’s biggest weaknesses, this doesn’t carry over into its application. It’s, of course, a given that games sound great on it, but listening to music is also a wonderful experience with the Stealth 600. Most importantly, it manages to do all genres justice, whether it be in the realm of games, music, or movies.

One of the ways in which it manages to accomplish such a feat, aside from having a brilliant frequency response, is by offering users three distinct listening modes – Signature, Bass Boost, and Bass and Trebble – that they can switch between on the fly. To switch between the different modes, you just have to tap the Mode button on the left ear cup. The transition is always impactful, so all that’s left for you to do is decide which mode to use for which game.

In addition to this, pressing the Power button once the headset is already up and running will make it enter the Superhuman Hearing Mode, which dulls the bass and enhances the mids. This has the effect of pushing certain sounds like footsteps and weapon reloading to the forefront, giving you that competitive edge in online multiplayer matches.

Lastly, we have to applaud this headset for its vast and expansive soundscape. Usually, when you see a headset that’s compatible with both the PC and the PS4 and boasts of virtual 7.1 surround capabilities, this feature is only available when using the PC. However, the Stealth 600 lets you immerse yourself in the gaming world on your console.

For a headset of this price, the audio quality is very competitive. And if you’re a fan of shooters, then the virtual surround sound and Superhuman Hearing Modes here alone are worth the price of admission and guaranteed to take your gaming to the next level.

In conclusion, all we can say is that the Turtle Beach Stealth 600 is one of a kind, both in the positive and the negative sense.

On the one hand, it’s a great sounding headset that’s just as good for gaming as it is for multimedia. It comes with a good mic, and it has decent battery life. Most importantly, it lets you enjoy wireless gaming on the PS4 in an effortless manner.

On the other hand, it’s all-plastic design feels cheap, and its weird, VR-friendly build makes it one of the strangest headsets we’ve had the pleasure of reviewing. The fact that you can’t connect it to your smartphone also doesn’t score it any bonus points in this price range.

If you can play into its strengths and don’t mind the weaknesses, then it’s definitely worth the purchase. A wireless Turtle Beach headset with this kind of sound for just $100! Where do we sign up?

But comfort is the deciding factor when discussing any headset. And this one simply did not impress us. The glasses-friendly design is always awesome to see, but having the feeling that your headset is going to fall off, even though this never happens, can take you right out of the gaming zone. 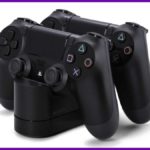