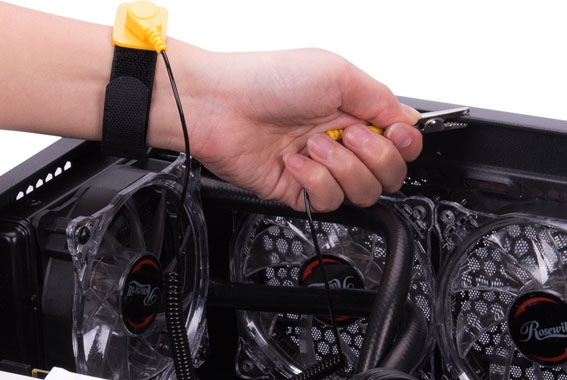 How exactly do we protect fragile, not to say expensive, electronic parts from a wallet-busting static discharge? By using the old anti-static wrist strap, of course.

An anti-static wrist strap is made up of conductive threads and a metal piece to continuously even out or ground any static build-up between the user and electrical equipment.

With an anti-static strap adorning your wrist, you’re free to work away at your dream machine and handle parts safe in the knowledge that an unexpected static charge won’t spoil the fun.

In this guide, we will teach you the simplest and easiest way to use an anti-static wrist strap, so keep reading to get started!

It’s worth having a basic grasp of how static electricity works to understand how to make use of an anti-static wrist strap.

The result is that all-too-familiar zapping feeling we’ve all experienced when touching a metal door handle, radiator or even another person. Although harmless to us, the charge is powerful enough to disrupt and break small, complex circuitry such as those found on motherboards, GPUs and electronic boards in general.

The purpose of an anti-static strap is, therefore, to balance out the electric potential between the two objects to avoid damaging equipment.

Although an anti-static wrist strap isn’t imperative, wearing one is highly recommended if only you should make a mistake on the side of caution. If we consider the cost of components and the damage an imperceptible static discharge can cause, a few dollars is a small price to pay for the added peace of mind.

With this method, the goal is to even out the electric potential between you and the PC without causing a damaging surge of static electricity.

The grounding technique ensures the dispersal of any errant static charges into the ground circuit via a grounded conductor. The method is dependent on the building’s electronics being safe and up to standard with proper grounding arrangements for each electrical socket.

Any static build-up is discharged through the PSU to the grounded circuitry in your home, making it safe to work with delicate components. This method is particularly suited if you have to move around a lot and are worried about building up a static charge through accidental friction.