The Noblechairs ICON chair is a decent gaming chair that isn’t traditional in any way. It features no flashy colors or design but instead boasts a more traditional approach with some gaming elements tossed into the mix for the better good.

We’ve all seen traditional gaming chairs, right? They’re commonly too bright, even obnoxious chairs designed to appeal to people with more money than sense (or taste). However, what if we told you there was a chair that not only looks great but which felt great as well?

Today we’ll be examining the Noblechairs ICON – a gaming chair that’s far more elegant than most others on the market. It’s not all aesthetics, though. There are several other features that make the ICON a must-have, and we’ll cover those below right now.

Let’s start with the basics. This chair comes in two variants. The first (around $445) has a seat made from fabric and PU leather, while the second features genuine leather upholstery and costs quite a bit more at around $700. Obviously, the latter won’t be for everyone, but the ICON speaks for itself.

Take, for instance, the armrests. Some of the ICON’s rivals are content with moving in or out, but this model’s are fully adjustable: they move in, out, up, down, and can be angled however you please. The casters deserve special attention too – they’re designed to work on either hard or soft flooring so you can concentrate on the bigger picture instead of sweating the little things.

Like most others, this chair was created with comfort in mind. However, gamers require different things from their chairs. After all, it’s not just a place to sit. It’s a battle station, a cockpit. For some of us, a computer is a livelihood and the chair, the keys to drive it. So how does the ICON help?

It’s specially designed to help support the user’s back and neck, even after extended periods of time. Further, the high-density foam filling should remain comfortable for years without any signs of flattening. So, we’ve established that the ICON is a pleasure to use, but how will it hold up to the rigors of daily life? 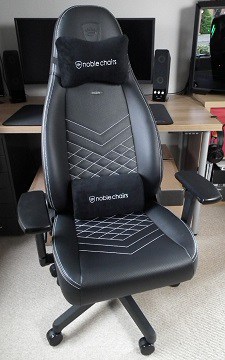 Actually, pretty well. The frame is sturdy and made from solid steel, after all. The base is aluminum, so there’s no need to worry there, either. Whichever version you purchase, spills will slide right off of the upholstery. Even if you buy the basic variant, nothing will show against the black fabric. Good, right?

Believe it or not, we’re not done. This product comes with both neck and lumbar cushions, however these don’t use the traditional straps. Instead, they have a textured backing that ensures they won’t slide once properly positioned. With a maximum load of 330lbs, this chair can support all but the heaviest of users.

As if that wasn’t enough, the ICON comes with a two-year manufacturer’s warranty. This won’t cover any accidental damage, but if it arrives broken or one of the components breaks through no one’s fault, you won’t have to pay anything else to get it repaired or replaced.

Honestly, we think that the genuine leather version is a bit much. It’s a little expensive for what it is and appeals more to the user’s vanity than anything else. However, we believe the basic version of the Noblechairs ICON is reasonably priced, especially considering all the advanced features it offers.