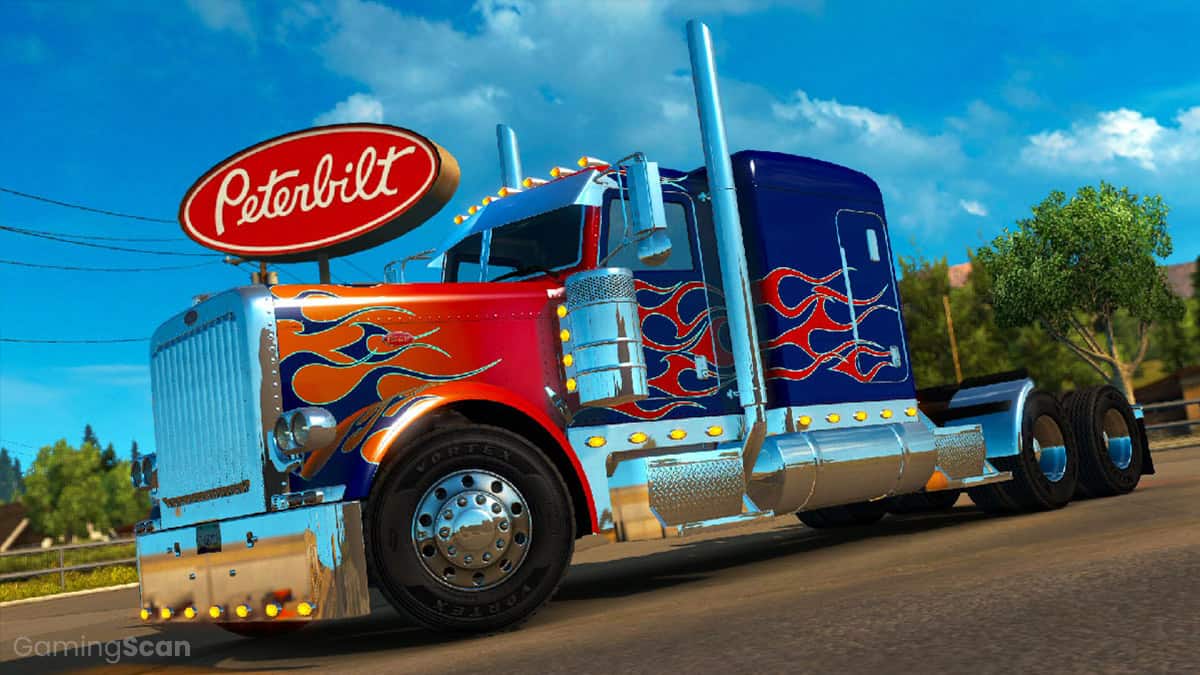 If the world of virtual truck driving is starting to feel stale to you, the best American Truck Simulator mods can help shake things up.

From adding new trailers and routes to improving graphics and features, there are plenty of ways to breathe new life into the popular driving sim.

In this list, we’ll showcase the best American Truck Simulator mods to bring along for your next long-haul trip across the USA.

So, without any further delay, let’s dive right into our picks for the best ATS mods in 2023!

If you’re not sure how to install American Truck Simulator mods, let’s quickly go over the steps for doing so on each operating system: 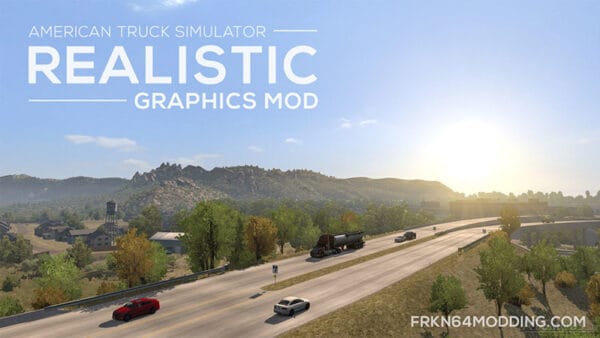 Improving the visual fidelity of a game like American Truck Simulator can go a long way toward reigniting your love for the game.

After all, who wouldn’t like a bit more eye candy to stare at while on the road for hours at a time?

With the Realistic Graphics mod, you’ll skyboxes, terrain textures, and weather effects are all upscaled to look more realistic and detailed. 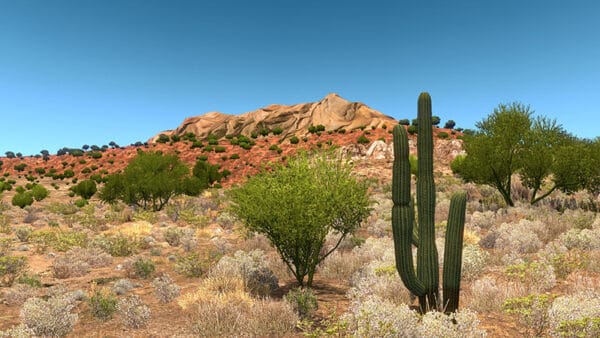 Building off the previous mod, Enhanced Vegetation is one of the best options for players looking to improve ATS’ visual presentation.

The main focus of this mod is to replace vegetation textures throughout the game’s map to appear more sharpened and saturated.

Additionally, trees receive new color adjustments and textures that make them stand out even at higher speed limits. 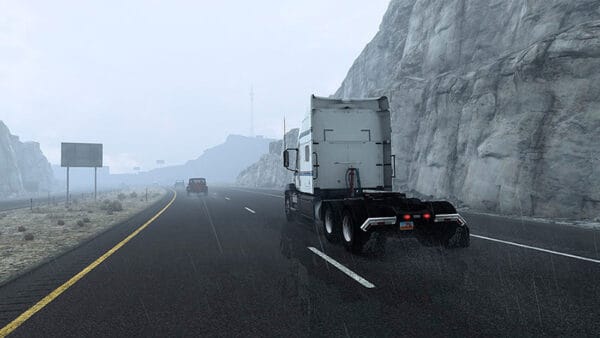 What good is all that lush vegetation if you don’t have equally-impressive looking rain?

With the Realistic Rain mod, wet weather in ATS takes on a whole new life with better raindrop texture, color, transparency, and sounds.

These benefits extend to your cabin’s interior with an increased number of raindrops appearing on the windshield and windows. 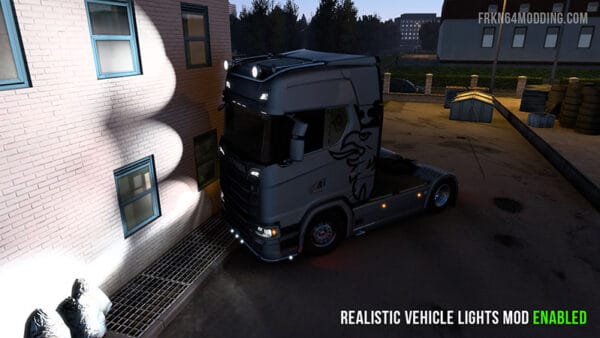 As its title suggests, this mod focuses on improving the details of vehicle lights while increasing visibility at long distances.

It affects not on the player’s vehicles but also AI-controlled vehicles and various other light sources throughout the game. 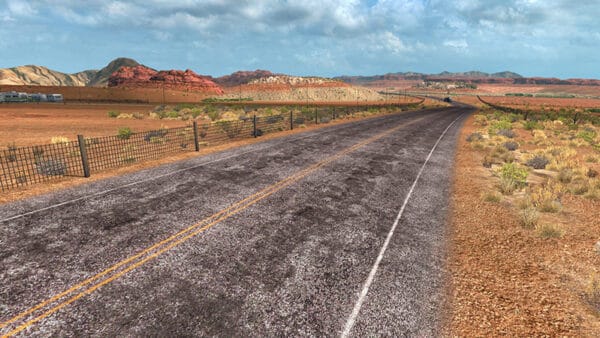 Anyone who’s driven in real life knows just how rare it can be to find a smoothly paved road lacking any bumps, cracks, or jagged lines.

To bring that sense of realism to ATS, we suggest using a mod like Realistic Roads, which replaces road textures and makes adjustments to road lines.

This includes fresh and dusty asphalt, pavement, and gravel roads with small imperfections based on tire tracks and traffic flow. 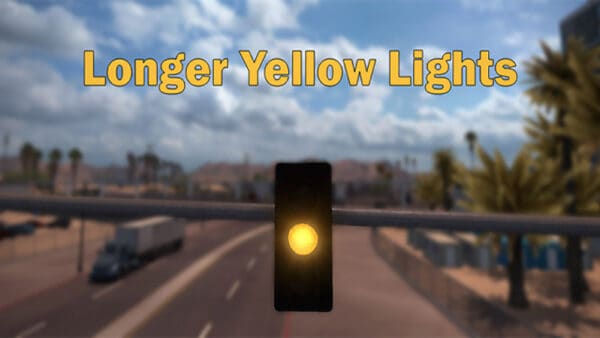 We’ve all been there before: you’re approaching a light, it switches from green to yellow, and you cruise on through believing you’re clear.

Only instead, you receive a fine for driving past a red light due to your heavy load not making it through in time.

With the Longer Yellow Lights mod, this annoyance becomes a thing of the past as the yellow light phase of traffic signals is increased from 2 seconds to 4.5 seconds. 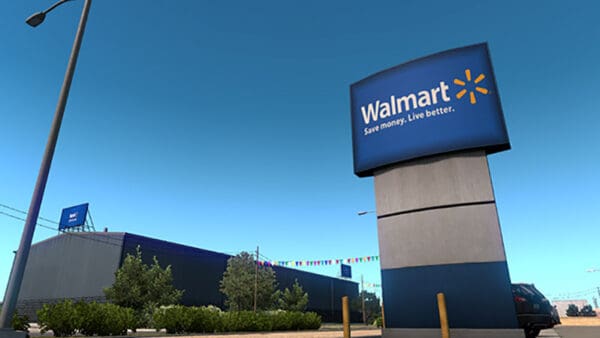 From a legal perspective, it makes sense for the ATS developers to not include any real-life brands in the game other than the officially-licensed vehicles you drive.

However, with a mod like Real Companies, Gas Stations & Billboards, you can get a more immersive and real experience by adding well-known companies to the game.

Once installed, recognized brands will start to appear on warehouses and truck trailers throughout the map alongside real-life gas stations as well. 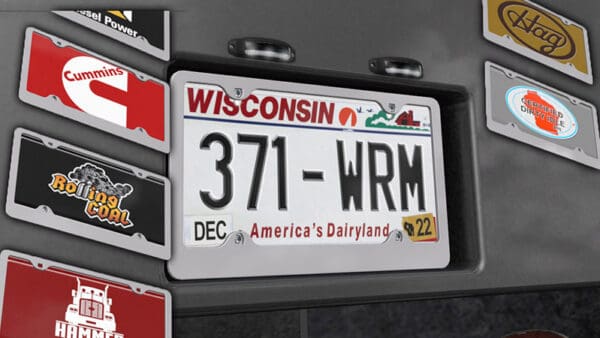 If you’re looking to add some visual flair to your favorite big rig, the License Plate – Accessory Pack mod is a great place to start.

It adds an assortment of high-resolution license plates based on all 50 states with a few novelty ones thrown in for good measure.

The plates can be connected to common accessory slots like bumpers, headache racks, bull bars, and anywhere else a plate would normally appear. 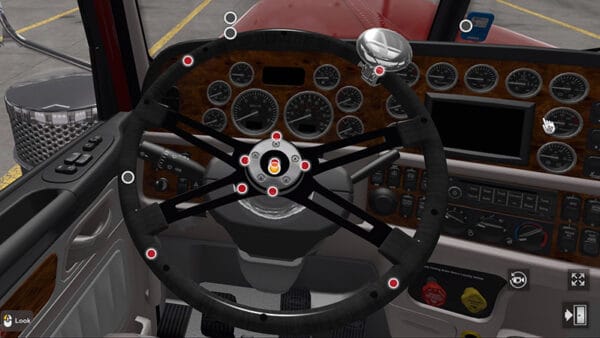 Along with modifying your license plate, why not add a mod that lets you customize your steering wheel as well?

With the Customize Your Steering Wheel mod, you’ll gain the option to change various aspects of your wheel including the color and parts of each section.

The mod comes included with a few pre-configured wheel designs that will spice up your rig with minimal effort. 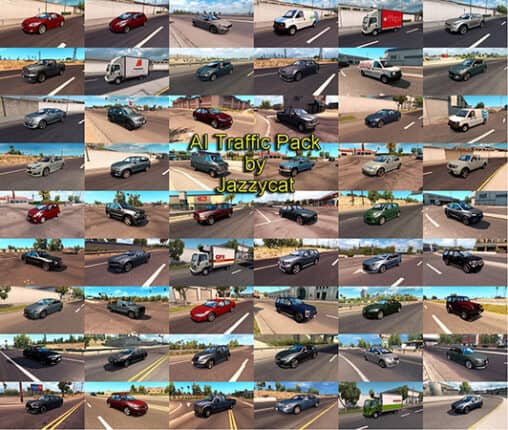 Next up on our list of the best American Truck Simulator mods is the AI Traffic Pack, which adds a host of new AI-controlled vehicles.

Over 325 cars are included, many of which are based on popular brands and models such as the Chevrolet Tahoe, Dodge Grand Caravan, Ford Explorer, and Tesla Model X.

As a standalone mod, every car in this pack is compatible with all maps in the game, ensuring you see more vehicle diversity anywhere you go. 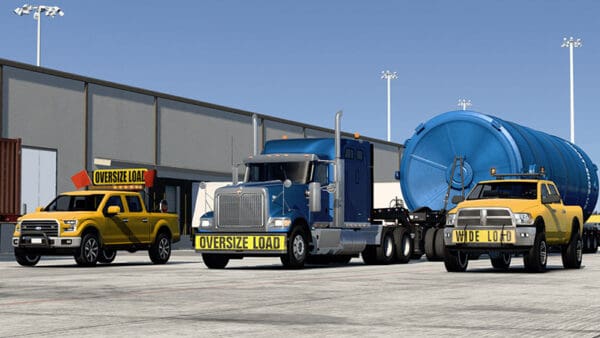 In line with the last mod, the Driveable AI mod will let you step into the driver’s seat of a limited number of NPC-operated vehicles.

As of this writing, it supports about 15 cars in the game, including various Ford and Dodge models in addition to police vehicles, and fire and garbage trucks.

The best part is most vehicles can still be tuned to your liking and feature functioning lights and sirens as well as custom interiors and engine sounds. 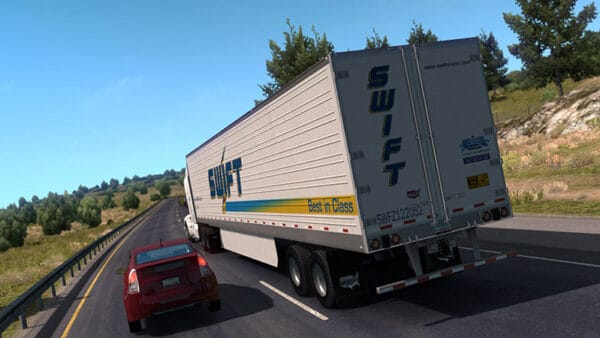 This next mod is dedicated to simulating real American truck traffic by adding over 100 new trailer skins to the game as part of SiSL’s Trailer Pack USA.

Each one has been carefully recreated based on original photos, with respect to official company brand colors and iconography.

If you’d like to expand your fleet of trailers even further, SiSL also has an Australian Trailer Pack add-on as well. 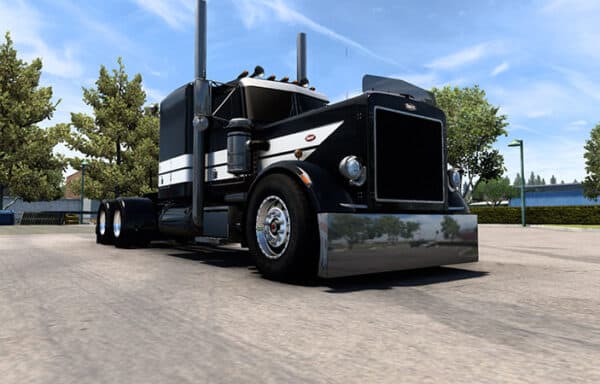 A quick search online will reveal a ton of eye-catching ATS vehicle skins designed to make your rig stand out from the competition.

However, for the purposes of this list, we’re highlighting the aptly named Black Beauty 359, which adds a sleek-looking custom black skin with white accents for the Outlaw Peterbilt 359.

Considering this is one of the most popular vehicles in the game, you’ll want to make sure to personalize yours the first chance you get.

Instead of making ATS more realistic, what if you went in the opposite direction with a cool and creative skin based on the hit cartoon and film franchise Transformers?

With the More Than Meets The Eye and Decepticon Truck and Trailer Skin mods, you can give your Peterbilt a completely new look.

The only choice left to make is whether you consider yourself a heroic Autobot or a villainous Decepticon. 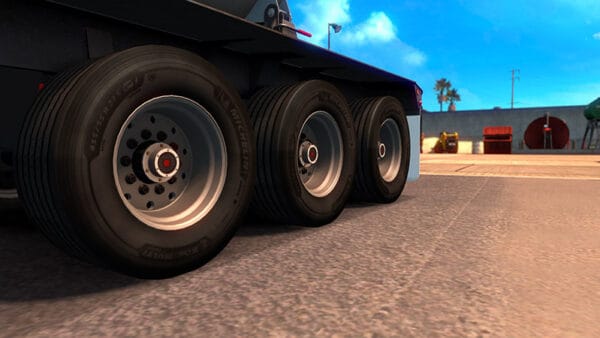 While vanilla ATS may offer a decent number of options for customizing your trucks’ wheels and tires, there’s always room for improvement with a mod like Smarty’s Wheel Pack.

So, if you’re the type of player who’s obsessed with fine-tuning your vehicle’s performance, a mod like Smarty’s Wheel Pack will come in handy.

It adds an assortment of new wheels and tires that perform differently depending on the weather and road conditions. 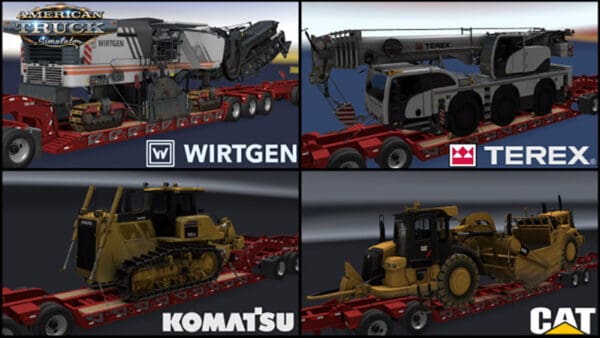 If you’re looking to put your hauling skills to the ultimate test, look no further than the Heavy Cargo Pack mod.

Similar to the official ATS Heavy Cargo expansion, this mod introduces new heavy cargo vehicles for players to transport across the map.

Each one is based on a well-known brand like Terex and Caterpillar and is compatible with both freight and cargo markets. 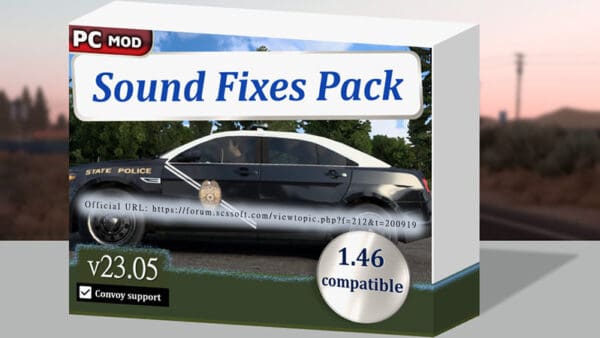 Our next suggestion for the best American Truck Simulator mods helps add some much-needed immersion and realism to the game’s audio.

Consistently updated for the past seven years, the Sound Fixes Pack aims to create more dynamic and atmospheric sounds for every action.

This includes reworked suspension, tire bumps, and cabin noises, unique tire and road noise based on the terrain, and a slew of other small but noticeable sounds. 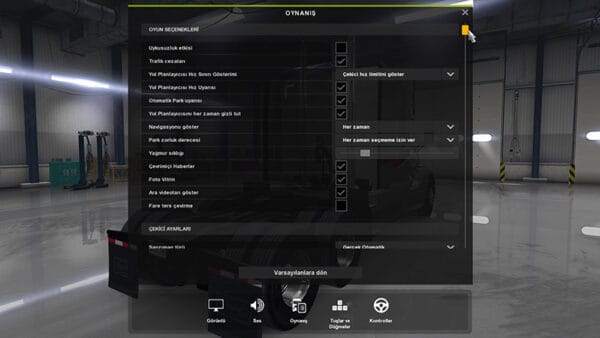 For those who aren’t quite satisfied with the vanilla ATS user interface, SiSL’s FlatUI is an absolute game-changer.

Swapping out the default gradients and menu icons with flat colors and simpler symbols, this mod gives a more modern, streamlined look to the game’s UI.

Note that it’s still a work in progress, so you may encounter the occasional bug when navigating certain menus. 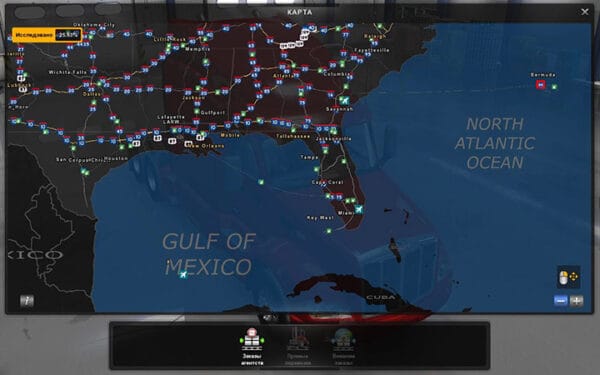 This next mod is for players craving a more seamless trucking experience without having to load into new areas.

With the Coast to Coast Map mod, you can drive to any part of the map in real-time using long inter-connected highways to get from one destination to the next.

However, to use it you’ll need to have the New Mexico, Oregon, Washington, Utah, Idaho, and Colorado DLC expansions already installed. 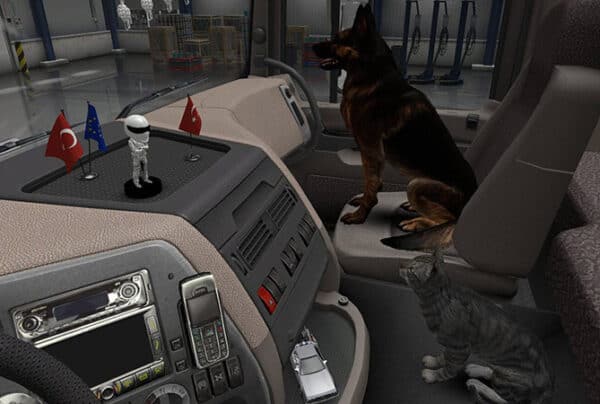 Rounding out our list of the best American Truck Simulator mods, we have SiSL’s Mega Pack, an ambitious collection of cabin accessories designed to help you travel in comfort.

It adds 400+ accessories tailored for different tastes, including female and male co-drivers, cute little bobbleheads to plop on your dashboard, and various snacks, devices, fresheners, and toys.

Many of the accessories can be personalized even further with customization options that let you add your own coffee mugs, country flags, etc. 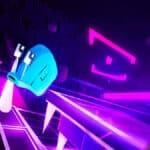