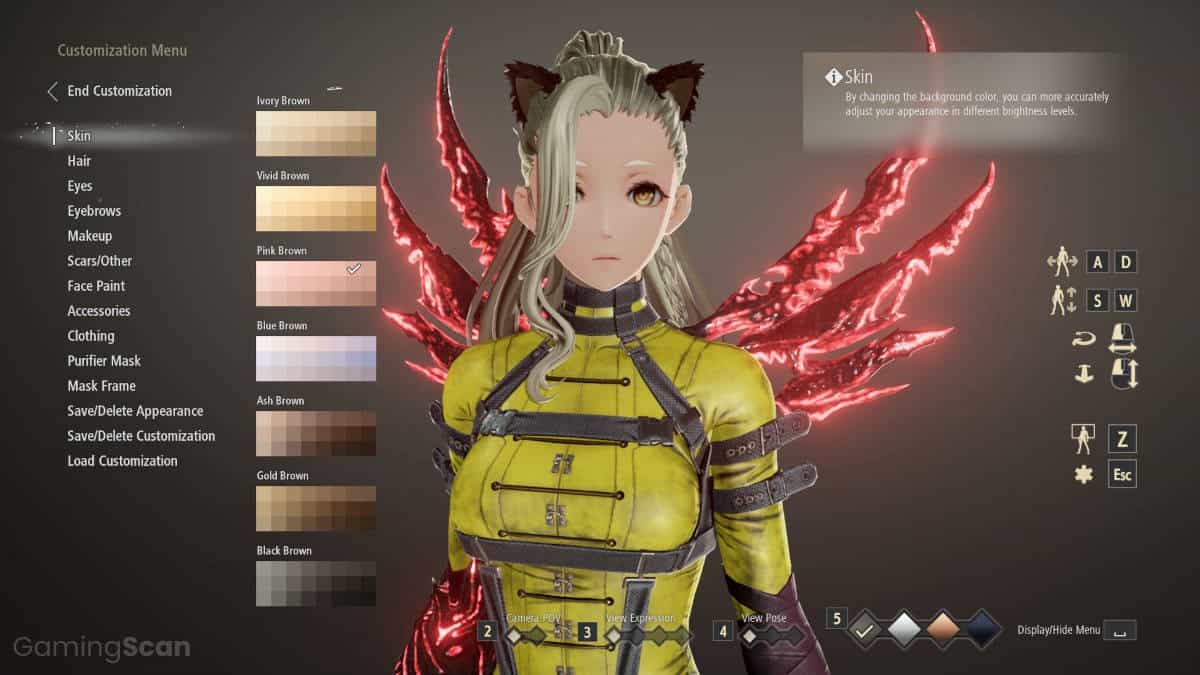 One of the most satisfying things about playing an MMO or RPG is getting to design your own character, deciding how they’ll look, assigning them special traits, and determining their class.

While some character creators can be quite robust and surprisingly detailed, others keep things simple with streamlined options and presets. 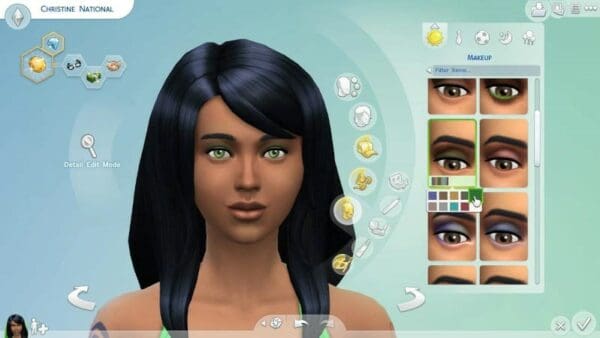 Our first recommendation should come as no surprise considering how important customization is in The Sims series, allowing players to truly express themselves.

The Sims 4 Create-a-Sim tool is the best version to date, allowing you to sculpt faces to your heart’s desire, change body shapes, and pick your preferred clothing style for different events.

Additionally, it lets you define your Sim’s personality, ambitions, and internal motivations before heading out into the world. 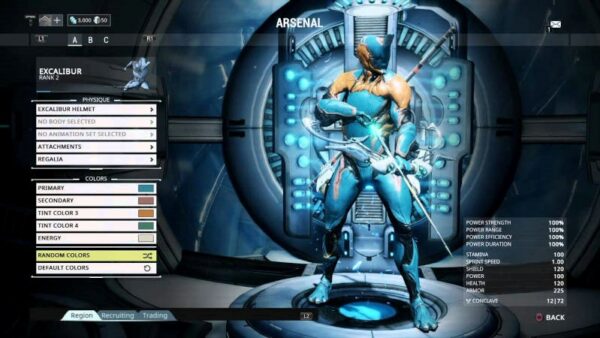 Getting started in Warframe, there isn’t much in the way of customization until you’ve sunk in a handful of hours (and likely purchased some Platinum, the game’s premium currency).

However, soon enough new skins, helmets, armor attachments, capes, and other ornaments get introduced, each with their own individual color slots and options for tint and energy emanations.

The game also lets you create customizable symbols for your character’s chest and back, assign cosmetic auras to your armor, and apply colors and skins to your weapons. 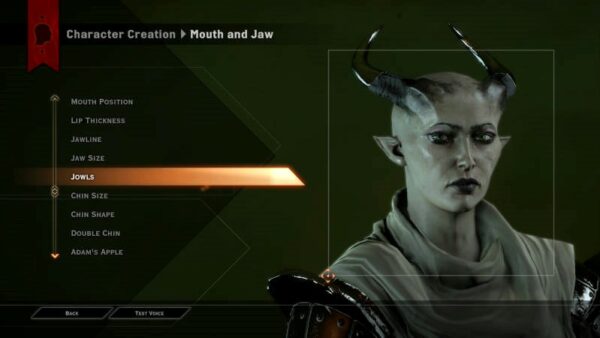 Dragon Age: Inquisition is another game that offers face-sculpting across four races to pick from: Humans, Elves, Dwarves, and Qunari.

It features several presets which can be further customized using a combination of sliders and more precise customization boxes that provide some flexibility.

With some time and effort, you can end up with a very distinct-looking character compared to the presets you start off with. 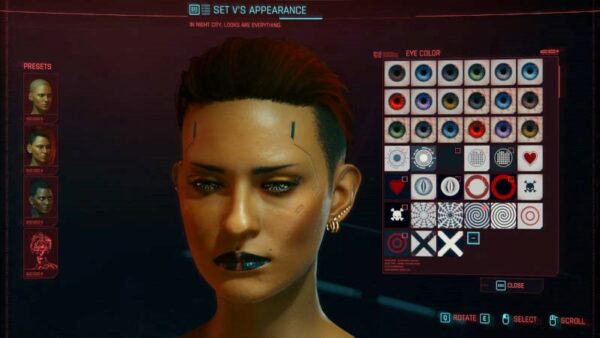 While there are a seemingly infinite number of reasons to complain about Cyperpunk 2077, its character creation tool is not one of them.

Set in a world where body mods are common, the game presents players with a hefty number of sliders and detailed options for customizing just about every feature, including more private parts.

In addition, you get to determine your character’s ‘Lifepath’ (basically their backstory) and assign them attribute points, core competencies, and natural aptitude for a tailored gameplay experience. 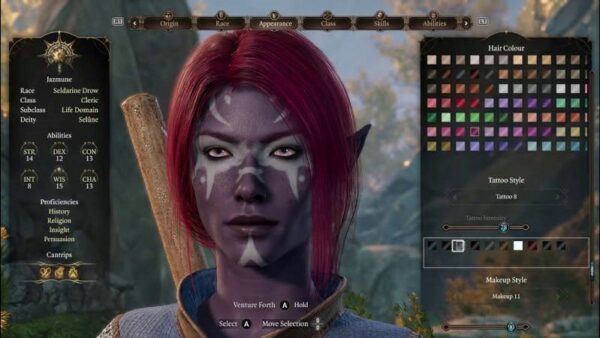 Still in Early Access on Steam, Baldur’s Gate 3 is already shaping up to be one of the best titles for character customization.

Currently, there’s no way to sculpt faces, though an assortment of male and female presets along with a large pool of hairstyles, makeup, and tattoos provide a good enough foundation.

Although each race has a default limited selection of hair, skin, and eye colors, the game gives you the option to unlock the entire spectrum and get hyper-specific with your D&D roleplay. 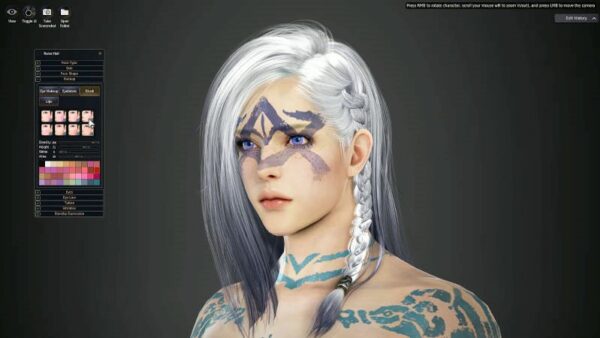 Black Desert Online has one of the most in-depth character creation tools, going as far as to let you make fine adjustments to your character’s hairstyle length and apply highlights.

Things get even more detailed as we move onto the body, with options like limb proportions, face sculpting, and micro details regarding eye and nose shape.

Combine this with BDO’s gorgeous graphics and there’s a good chance you’ll come out the other end with an impressive-looking character that’s ready to take on any challenge. 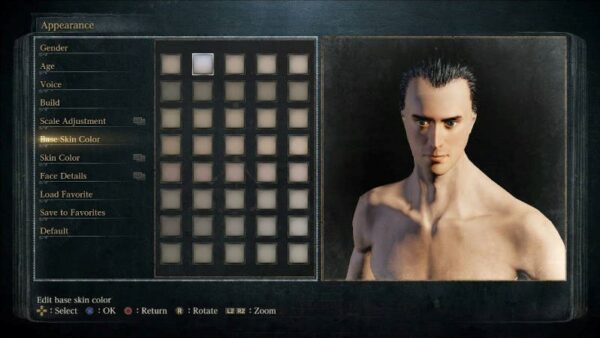 While it may not have the most visually attractive character creator, Bloodborne makes up for it with a wide selection of striking facial and body options.

This allows you to easily create bold-looking avatars that tend to come across as scary and intimidating, which seems fitting for Bloodborne’s dark fantasy setting.

Like Dark Souls, it benefits from the Similar Face feature, which lets you make new faces based on the game’s presets and your own previous creations. 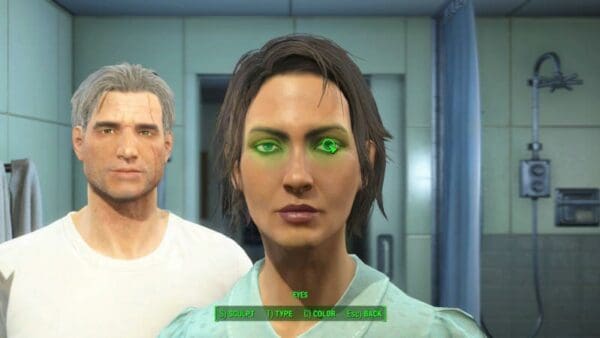 You get the option to design both a male and female character before picking between the two, with the one unselected becoming your spouse. 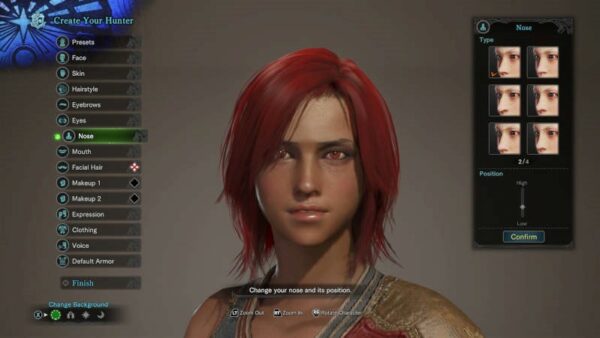 Despite relying on presets more than we would like, Monster Hunter: World’s character creator is fairly robust compared to other action RPGs.

It also happens to feature one of the more welcoming user interfaces and even includes built-in lighting schemes you can toggle through to see how your character appears in different lighting environments.

In addition to designing your Hunter, the game also has you customizing your Palico companion, determining their fur color, pattern, and tail shape. 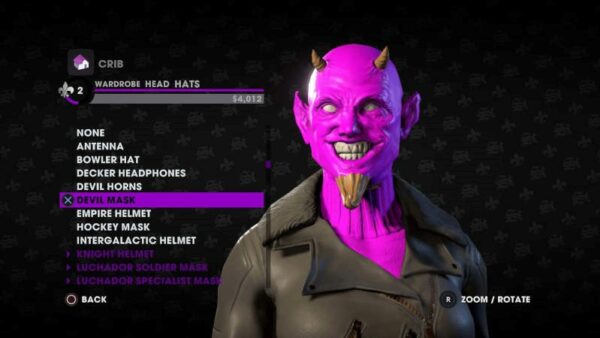 A common complaint of most character creators is that they limit your options to just your avatar’s face, which is then glued onto a super generic body type.

Saints Row 4 takes a very different approach to character customization, providing you with a triangular slider with Slim, Fat, and Muscular labels on each corner.

Beyond that, the game offers an impressive wardrobe selection and tools for further editing your clothing’s appearance, including the option to wear no clothes at all. 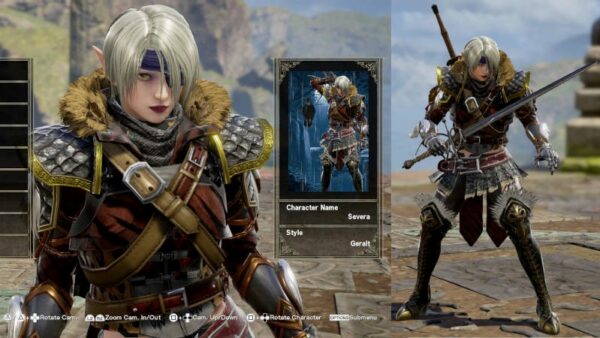 Aside from producing some of the funniest-looking fighters of all time, Soulcalibur VI’s character creator is better than it has any right to be.

The secret lies in its open-ended accessory and clothing systems, which allow players to combine various articles and get hyper-specific about their positioning and orientation on the character’s body.

This allows for some surprisingly detailed recreations of popular characters as well as some nightmarish ones from throughout pop culture. 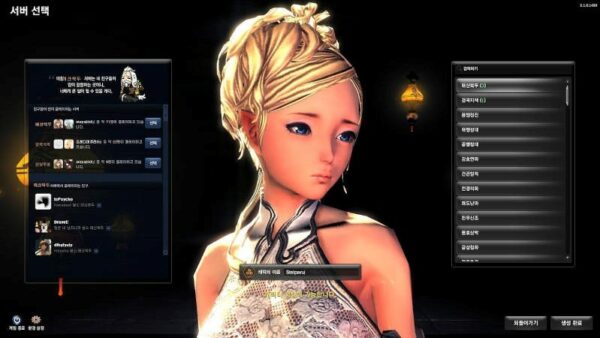 Like most MMORPGs, Blade & Soul provides you with a significant number of options for getting your character to look their best.

You’re able to edit individual parts of the face, including their jaw, cheek, eyes, and much more using multiple sliders, as well as apply various skin tones.

While the game’s vibrant, ultra-smooth art style is great for producing an array of visually pleasing characters, you can just as easily make grotesque monsters. 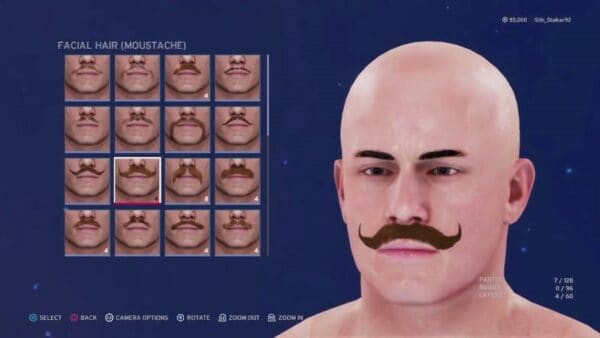 The WWE 2K series is known for having one of the better character creation tools around, despite the questionable quality of more recent entries.

The process of designing your own original wrestler lends itself to ridiculous outfits, makeup, and tattoo choices in order to make your character as weird as possible.

From recreating real-life celebrities who didn’t to video game icons like Sonic and Mario, there’s no limit to WWE 2K20’s detailed wrestler creator. 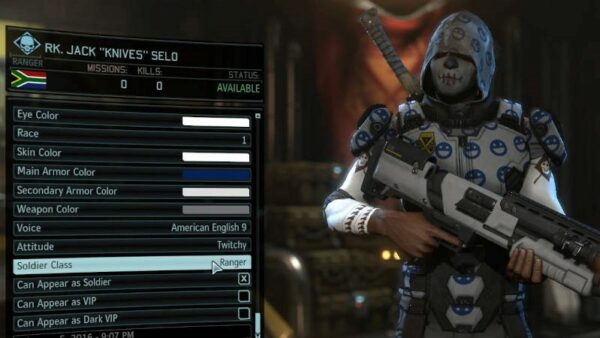 While XCOM’s character creator was competent enough, Firaxis really hit it out of the park with XCOM 2’s soldier customization.

There are multiple variants for every piece of armor, with the option to mix and match different gear with various headwear, accessories, and tattoos.

Both weapons and armor could be further customized using a wide selection of paint patterns and the amount of face, hairstyle, and facial hair options were expanded as well. 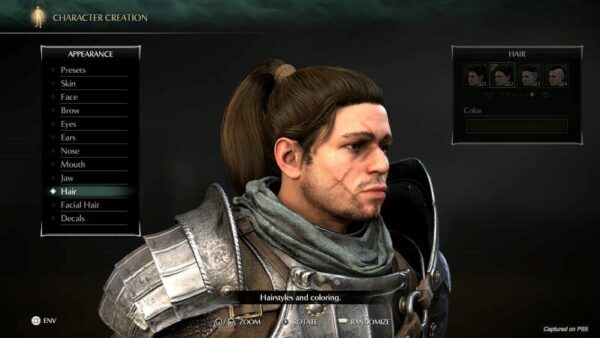 Considering the original Demon’s Souls released in 2009, the character creator wasn’t as robust or visually impressive as games released today.

This is something Bluepoint Games wanted to address in the Demon’s Souls Remake for PS5 by introducing new tools for an overall better experience.

You’re given an extensive list of facial features to customize, including ear, nose, mouth, and jaw, along with a decal editor for getting a unique look. 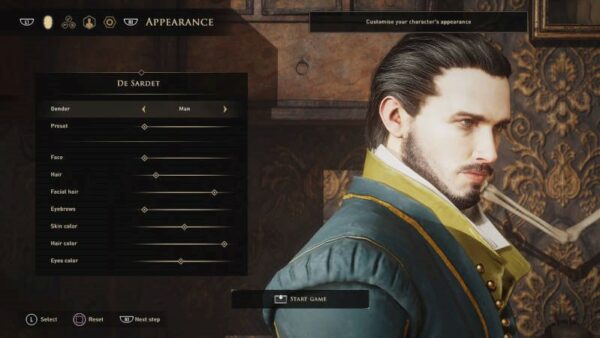 GreedFall is an underrated indie RPG that oozes elegance in all of its visual presentation, including its character creation tool.

While the options for manipulating your character’s facial structure are fairly limited, the UI and overall layout of each section are well-organized.

Lastly, the game features an armor decoration system that lets you fine-tune the look of your gear with various emblems and accessories. 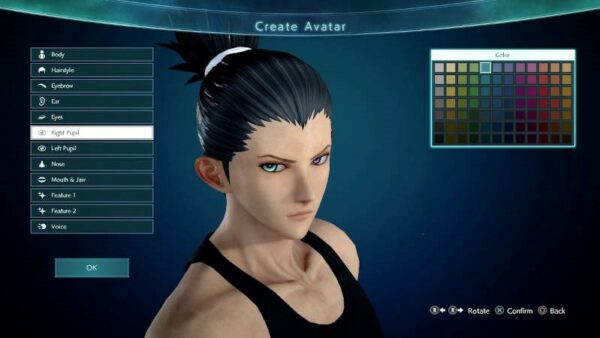 Despite being a fairly unremarkable 3D anime fighter, Jump Force happens to feature an exceptional character creator that’s perfect for dreaming up your own anime characters.

You have tabs for all of your standard facial features, along with hyper-specific tabs for adjusting your left and right pupils on your eyes.

Additionally, Jump Force lets you select up to two distinct features for your character, allowing you to push the limits of the creator to depict popular characters or invent your own. 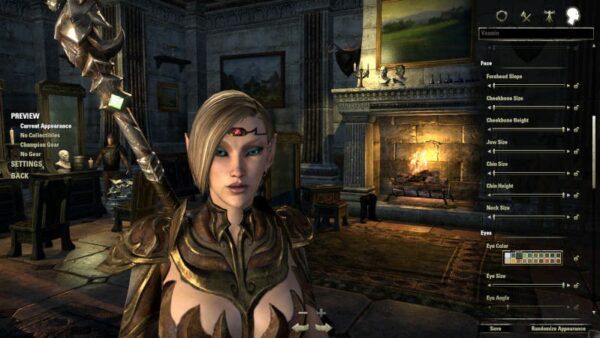 The Elder Scrolls games have gotten increasingly better in terms of character creation tools, with ESO having the most comprehensive one to date.

After determining your character’s race, gender, and class, you’re able to go in and modify their body and facial appearance using a wealth of options.

This includes things like face shape, hairstyle, and color, in addition to more specialized sections like torso size, body markings, and adornments. 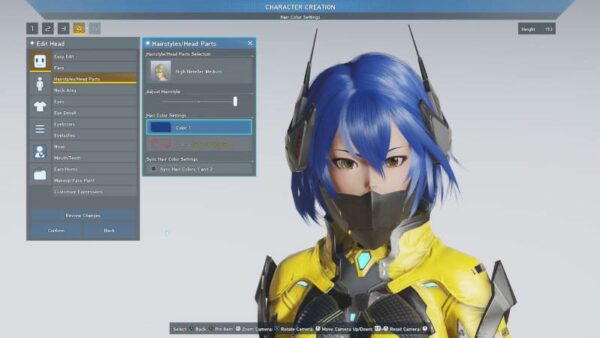 When it comes to Phantasy Star Online 2, character customization is where you’ll likely have the most fun messing around.

This is because the game offers a myriad of super-specific customization sections such as eyelashes, neck area, and even horns.

You’re also able to apply makeup or face paint to your character and create custom expressions for accurately conveying how annoyed you feel about running the same mission for the umpteenth time. 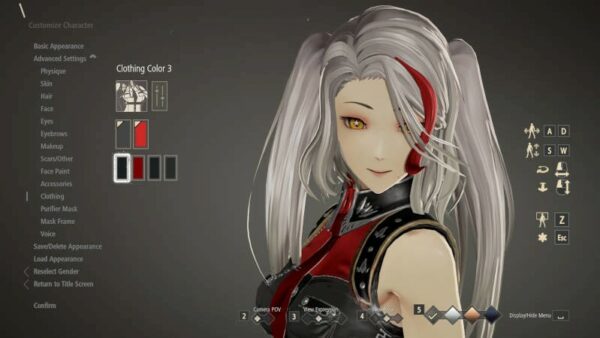 If you’re looking for a robust RPG character creator that lets you make anime vampires, look no further than 2019’s Code Vein.

This game loves to go in-depth when it comes to character customization, providing you with various tools to tailor your avatar’s physique, skin, face, hair, eyes, and mouth to your liking.

You also get options regarding your character’s purifying face mask, clothing, makeup, scars, and other accessories that add up to a cosplayer’s dream come true. 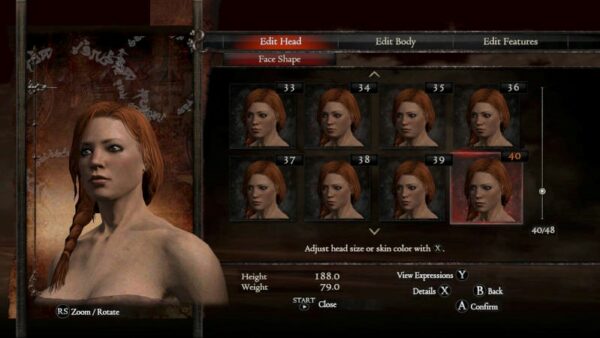 Initially released in 2012, the original Dragon’s Dogma’s character creator was very much ahead of its time, presenting players with a whole host of customization options for their head, body, and more.

The level of detail is surprisingly high, allowing you to make minute adjustments to your character’s height and weight as well as experiment with different facial expressions.

Similar to Monster Hunter: World, the game lets you customize your AI companion as well, including both their physical appearance and preferred playstyle. 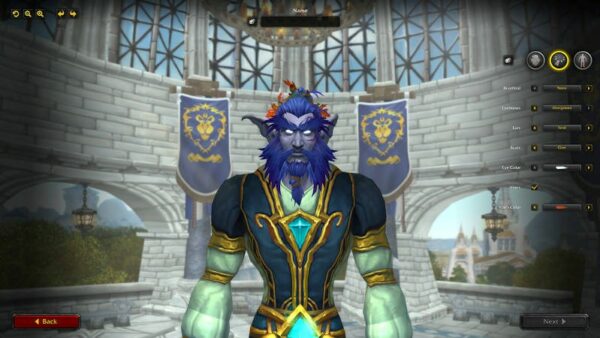 World of Warcraft recently updated its character creation screen after more than a decade of the same old same old, much to the delight and dismay of the game’s divisive community.

The new creator separates races by affiliation: Alliance or Horse, and features two icons for male/female as well as a row of classes at the bottom.

A ‘Customize’ button allows you to play around with various sliders to get the perfect look or randomize your appearance until you land on a good starting point. 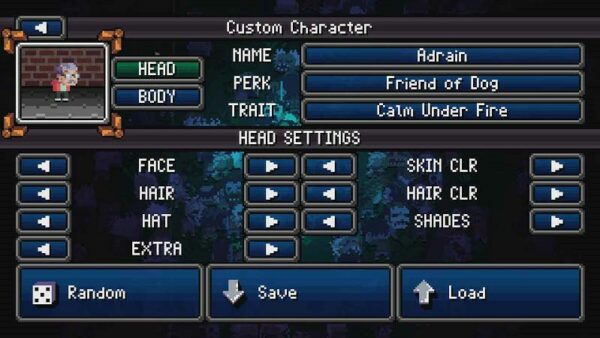 If you play enough 2D games with built-in character creators, then you’ll know that most of them are nothing to write home about.

However, zombie roguelike Death Road to Canada stands out for its relatively deep character builder that lets you assign various physical features, perks, and traits.

What’s more, the game gives you a total of 96 slots for saving custom characters for future playthroughs and even includes a Familiar Characters mode that generates NPCs based on saved designs. 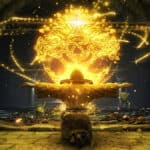