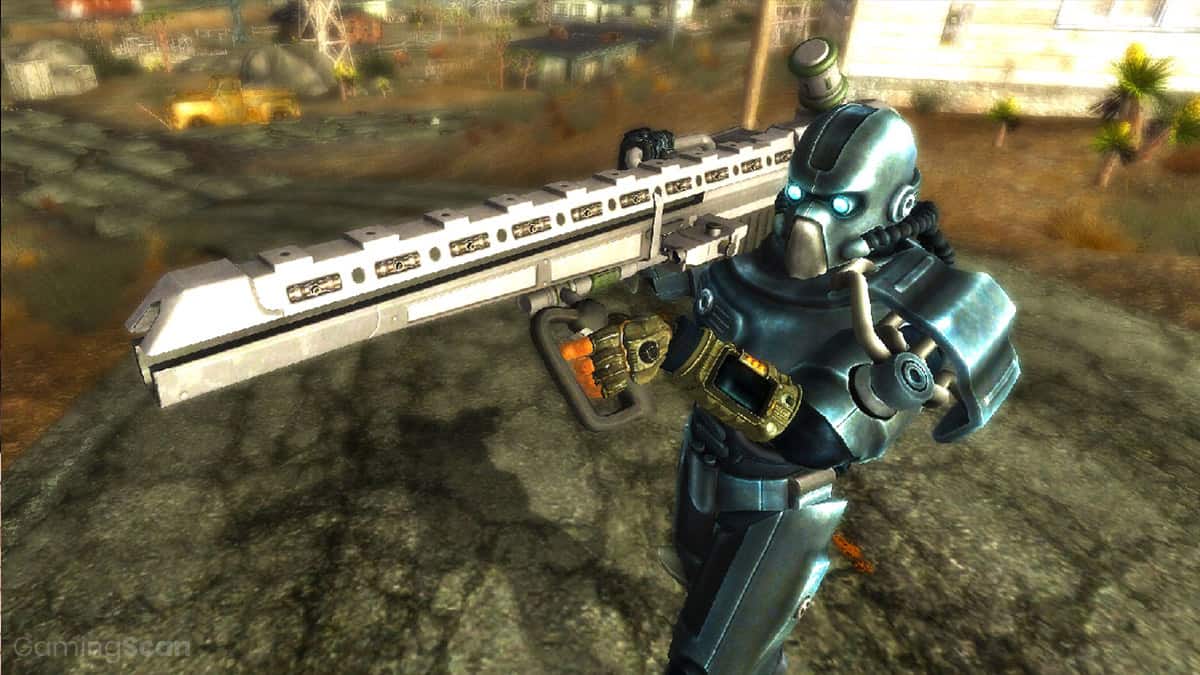 Despite releasing over a decade ago, Fallout: New Vegas is considered the best game in the series by many fans and is still constantly being played to this day.

On PC, the game is well supported by a feverish modding community that’s continually churning out new content that completely transforms and reimagines New Vegas

For more modding recommendations, check out our growing library of curated gaming lists, and comment below with your favorite New Vegas PC mods! 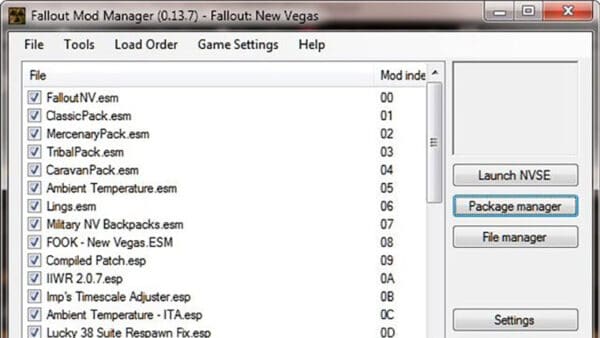 For a mod-heavy game like Fallout: New Vegas, you’ll definitely want to install a mod manager to keep track of your various mods.

The community standard is Fallout Mod Manager, or FOMM, which makes the process of installing and maintaining the correct mod load orders quick and painless.

We recommend giving it a download before venturing into Fallout: New Vegas’ more complex modding territory, including the rest of this list. 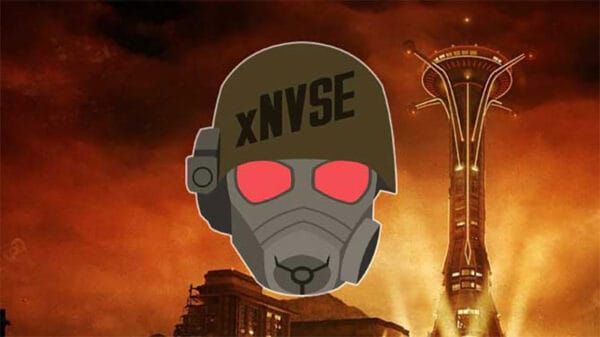 Another tool you’ll need to install before messing around with more complicated mods is New Vegas Script Extender or NVSE.

This tool makes it so the game’s script is appropriately expanded to allow you to run hundreds of mods at the same time without causing any technical hiccups.

If you do find yourself still running into issues with it installed, you may want to look into any conflicts with the mods you’re trying to use. 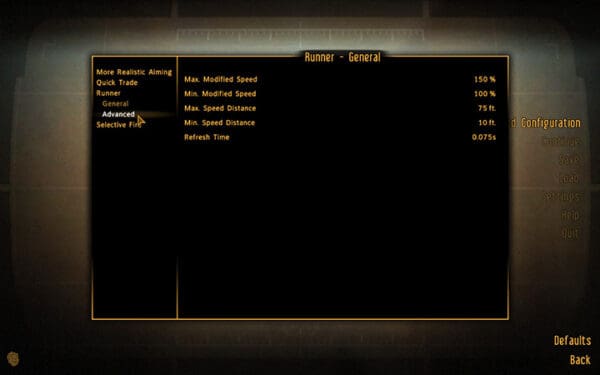 Normally, you would have to close the game, make your changes, then re-launch New Vegas for them to take effect, so this definitely steps things up in that regard.

The user-friendly menu is designated to its own tab in the game’s pause menu, making for ease of access regardless of where you are in the world. 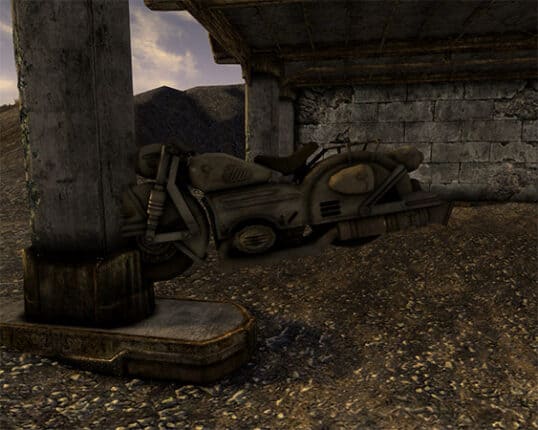 Anyone who’s played Fallout: New Vegas on PC, or really any Bethesda title for that matter, can attest to their generally buggy nature.

A quick fix for lowering the chances of your game crashing is to install a simple mod plugin like New Vegas Anti-Crash, or NVAC. 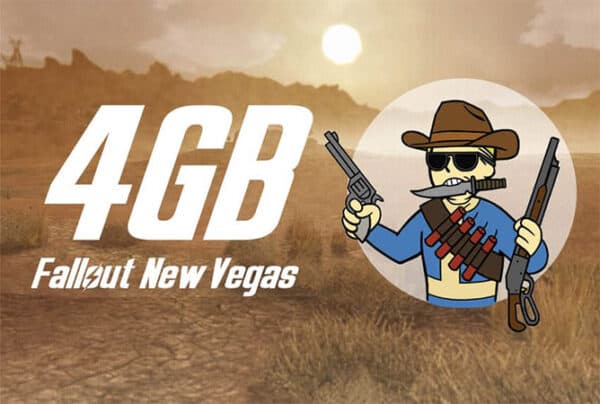 The next mod we recommend downloading is 4GB Fallout New Vegas Updated, the most current version of the popular New Vegas performance mod from the PC community.

Once installed, this tool loads New Vegas with the Large Address Aware executable flag set to use the entire 4GB Virtual Memory Address Space allocated by the game.

It’s especially useful when trying to run the numerous graphics mods and texture packs we’ll be exploring later on in this list. 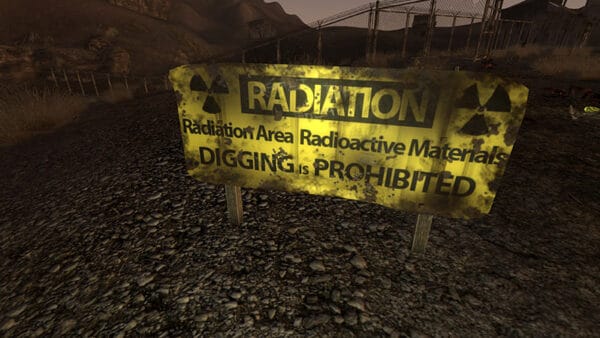 You’ll find there are many New Vegas texture packs on the internet that take different approaches to re-texturing the game’s dated-looking surfaces.

One of your best options is NMCs Texture Pack, which takes some creative liberties in redesigning New Vegas’ roads, trees, landscapes, vehicles, buildings, and interiors.

On the other hand, those who want to maintain the essence of the vanilla textures while upping their resolution are welcome to install the more subtle Legacy Reborn Texture Pack. 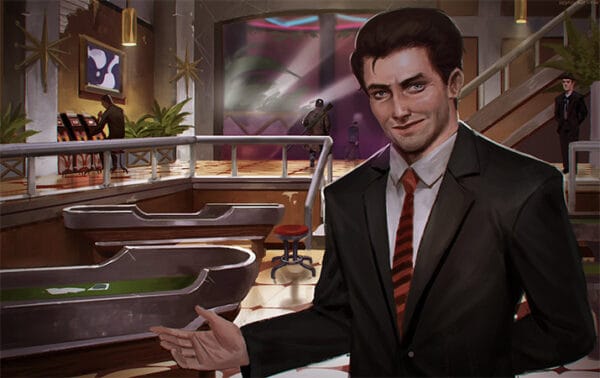 The end result is over 7,000 lines of replacement dialogue by professional actors for 145 characters that appear throughout the game.

While it may seem unnecessary, playing with this mod goes a long way towards increasing New Vegas’ immersion with characters that feel more distinct. 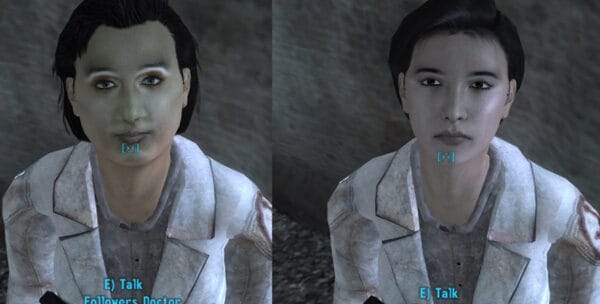 The appearance of various NPCs in New Vegas hasn’t aged well either, with many characters having unrealistic proportions or being otherwise inaccurately portrayed based on their descriptions.

To rectify this, we suggest installing Dracomies and Weijiesen’s Fallout New Vegas Redesigned 3 mod, which touches up many of the characters you encounter throughout the game. 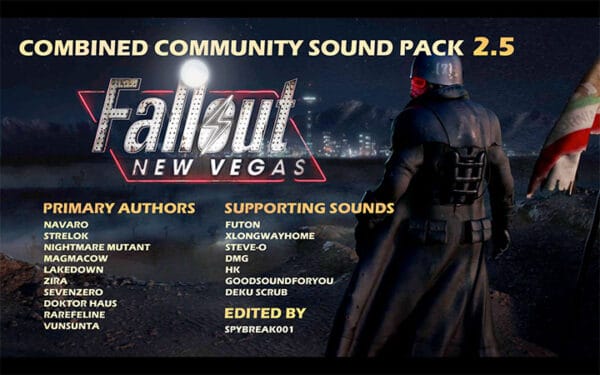 You’ll find this pack is also compatible with several other popular environmental and music mods for Fallout: New Vegas.

Players craving new adventures in Fallout: New Vegas are encouraged to check out the Roleplayers Alternative Start mod on PC.

This mod adds a new starting system for Fallout: New Vegas that lets you decide your character’s backstory before heading out into the world.

Their starting gear and location are determined by your choices regarding skills, history, and ties to any of New Vegas’ factions. 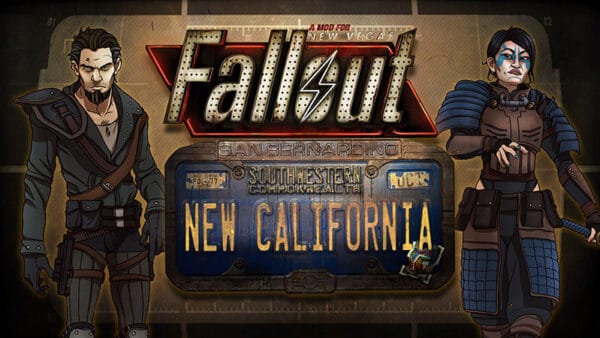 Next up is Fallout – New California, an ambitious DLC-sized mod that introduces a standalone quest serving as an unofficial prequel to New Vegas’ campaign.

The new story focuses on a war between the Super Mutants, Raider Alliance, NCR, and other factions that appear throughout the game. 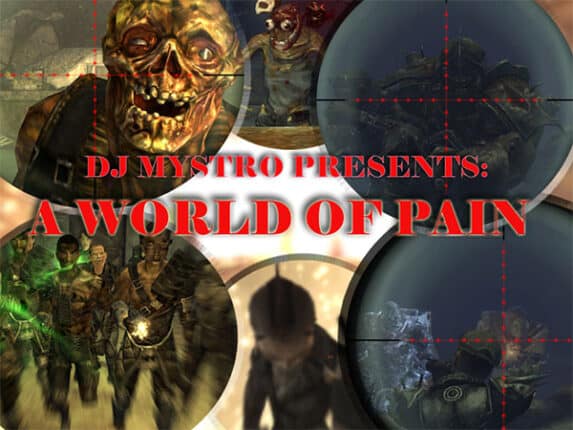 Mod: A World Of Pain

Speaking of new locations, A World of Pain is another popular community mod that adds a wealth of new environments to explore throughout the wasteland.

It features a whopping 170 new areas ranging from subway tunnels to vaults, gas stations, and abandoned factories all set within the existing world of New Vegas.

Each location is teeming with loot, NPCs, questlines, and enemies that raise the stakes by increasing the difficulty and rewards. 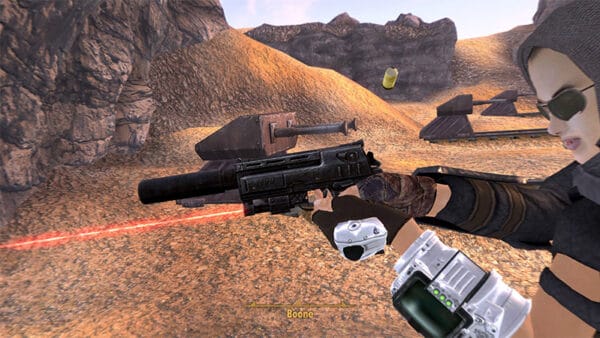 There are countless Fallout: New Vegas weapon mods available online, so here we’ll be focusing on two that offer an assortment of new guns and mods for taking on threats in New Vegas.

The first one is Antistar’s Weapons Mod Expanded, or WMX, which adds a host of unique guns and melee weapons while overhauling New Vegas’ weapon mod system.

The second one is Millenia’s Weapons of the New Millenia, which introduces an arsenal of 45 detailed weapons based on modern-day guns with HD models and textures. 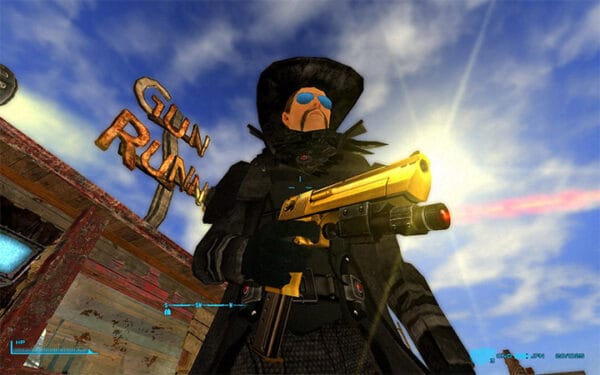 Without a doubt one of the most popular community mods, Project Nevada adds an exhaustive amount of new content to New Vegas via module-based packages.

The core module serves as a foundation aimed to make the game more interesting, challenging, and outright fun by injecting several quality-of-life improvements.

From there, it’s up to the player to decide where they want to take things as the optional modules cover everything from survival mechanics to cyber-enhancements, and further gameplay rebalances. 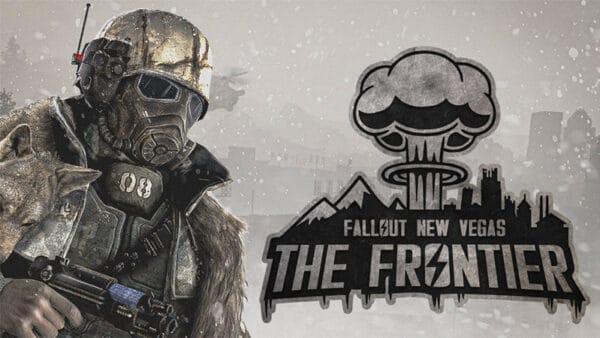 Another mod that drops players in a brand-new location, Fallout – The Frontier is a gigantic fan-made DLC that boasts a ton of content.

The story sees the Courier caught in the middle of a conflict between the NCR and Legion in the snow-blasted remains of Portland, Oregon.

Included are three new major questlines, over 60 side quests, hundreds of new armor, weapons and items, and thousands of fully-voiced dialogue. 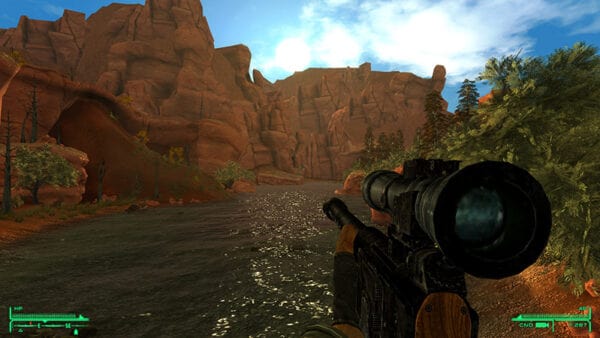 Who said the apocalypse had to look so desolate? With these New Vegas weather mods, you can set the tone of your next playthrough by adding new weather effects.

The first one we recommend downloading is Nevada Skies, an advanced weather mod that allows you to pick from 400+ unique weather types and customize them to your liking.

The other one is the more popular Fellout NV, which removes New Vegas’ orange tint while adjusting the brightness, coloring, and lighting for various weather modes in the game. 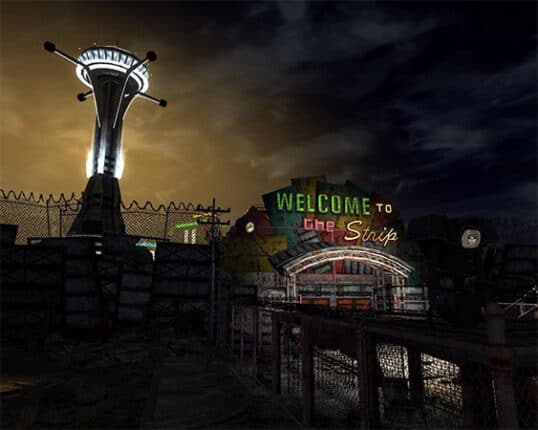 Players looking to directly change New Vegas’ lighting have the option to take things in two completely different directions using either of the following mods.

With Electro City, you can brighten up the Mojave wasteland by adding a ton of new lights and light fixtures rivaling that of the Las Vegas strip.

Alternatively, Realistic Wasteland Lighting is a great mod for improving lighting as well as other environmental conditions based on realistic desert settings. 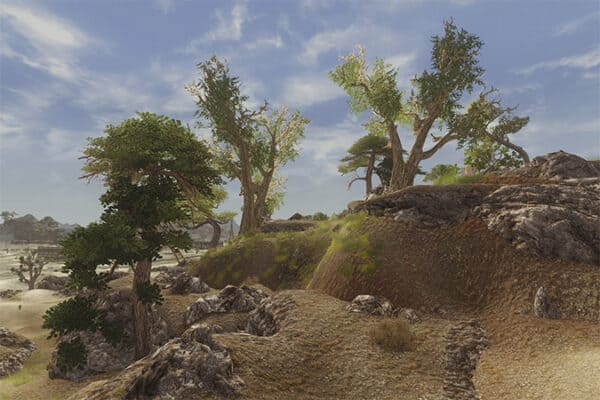 While we’re at it, why not raise New Vegas’ tree and plant diversity with a mod such as Wasteland Flora and Terrain Overhaul.

There are three presets included for players that want to add more greenery, maintain New Vegas’ desolate environments, or strike a balance between the two. 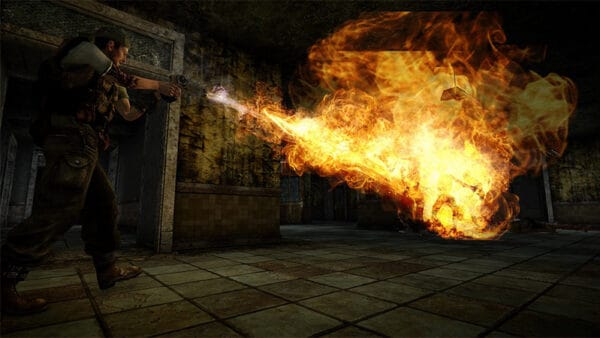 Considering Fallout: New Vegas was released back in 2010, time hasn’t been exactly kind to its visuals, in particular, its animations and special effects.

You can fix that with a mod like Essential Visual Enhancements, or EVE, which greatly improves the overall quality of various effects and animations in the game. 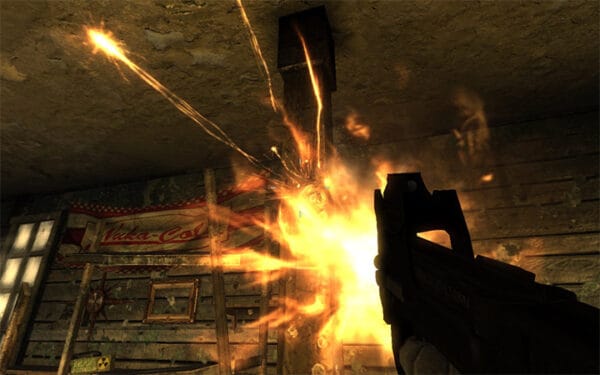 Impact is another mod that works hand in hand with mods like EVE to improve the visual fidelity of New Vegas’ combat.

It does so by assigning a ton of new professional-grade visual effects and decals that add a strong sense of power and danger to the game’s ballistic weaponry.

After installing, players will see bullet holes and casings that match their respective ammo and custom particle effects when firing at various surfaces. 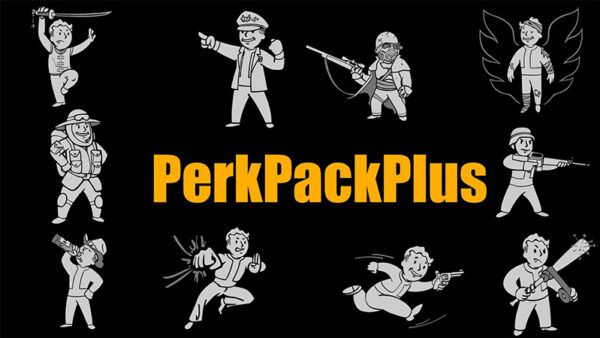 Last but not least, if you’re looking to spice up your New Vegas character builds, mods like PerkPackPlus are a great place to start.

This is because it adds various new perks suited for different specializations that go beyond vanilla New Vegas’ perk pool.

In many cases, these perks help add value to armor, clothing, and weapons that are otherwise useless or suboptimal in the base game. 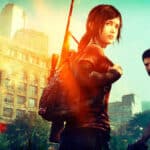 Best Games Like The Last Of Us
Related Topics Tags