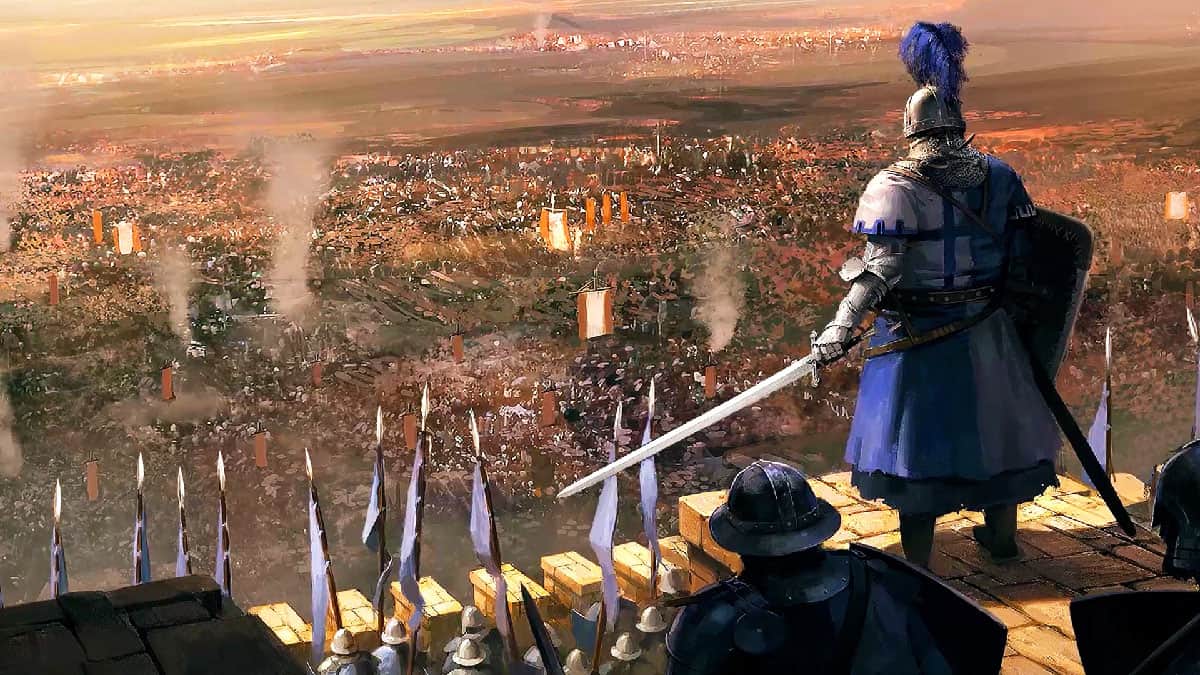 While the genre is best defined by strategy staples like StarCraft and Age of Empires, new indie releases prove there’s always room for innovation.

In this list, we’ll highlight the best RTS games on PC worth adding to your collection in 2023.

We hope at least one new RTS game catches your eye!

First up on our list of the best RTS games on PC is Knights of Honor II: Sovereign by Black Sea Games and THQ Nordic.

Following in the footsteps of the original, it sees you fighting to become the king of Europe in medieval-inspired real-time strategy battles.

To grow your empire, you’ll learn to manage provinces, gather armies, initiate diplomacy, and even dabble with espionage.

There are over 200 kingdoms spanning Europe, North Africa, and Asian continents to play as across single-player, multiplayer PvP, and co-op.

While the original Age of Empires revolves around the Stone and Iron Ages, later installments have shifted more squarely to the Middle Ages.

Age of Empires IV is a largely successful attempt at recapturing the original trilogy’s magic while offering new experiences tailored for veterans and newcomers.

In it, players are tasked with managing their civilization’s workers and military units, eventually turning their small population into a mighty nation.

The game features a 30-hour campaign that sees you advancing through the ages as you collect resources, wage war with enemies, and unlock new technologies.

Whereas many of the best RTS games on PC center on growing and developing nations that need food, shelter, and protection, Three Kingdoms is about warfare.

Set during the Chinese Three Kingdoms period, it sees you playing as one of 11 rival factions battling to become China’s new ruler.

Improvements to Total War’s UI and enemy AI are included, resulting in immersive RTS battles with less time spent in menus and more on the battlefield.

If you’re an RTS fan, chances are you’ll feel right at home controlling units and resources while spreading influence throughout China.

In many ways, the game feels like a spiritual successor to Company of Heroes if the ground troops were accompanied by hulking machines.

Players are tasked with managing squads as they capture resource-generating points using cover-based tactics and an array of customizable weapons.

There’s also some base-building mixed in and the central campaign can be played either solo or cooperatively.

Next up, They Are Billions is a steampunk-themed colony sim set in a post-apocalyptic world overrun with flesh-eating zombies at every turn.

As you guide humanity to salvation and try to rebuild civilization, you’ll have to fight massive swarms that frequently attack your settlements.

The game arms you with craftable mechanical defenses to protect survivors as well as steam-powered weapons for cracking a few zombie heads.

Although battles can feel intense at times, players can always pause the action mid-fight to build new structures or issue orders to troops.

Offworld Trading Company is an economics-driven RTS game created by the Civ IV Lead Designer that sees you vying for control over Mars’ resources.

Similar to Civ, players start out as one of many different leaders dubbed ‘CEOs,’ each possessing distinct traits and abilities that can help or hinder the business.

Additionally, OTC uses a player-driven market that’s constantly in flux, forcing you to make tough choices regarding which resources to sell or hoard.

It also boasts a robust, highly replayable single-player campaign along with online multiplayer support for up to 8 players.

Whether or not you consider yourself a Halo fan, the series’ foray into real-time strategy with Halo Wars is still worth experiencing in 2023.

For one, it’s extremely polished as far as high-profile RTS games are concerned, and secondly, does a great job of adapting the IP to a new format.

Players can expect the same high-stakes action found in the series’ FPS installments only from a fresh perspective with multiple units engaging in battle.

Word to the wise: the Definitive Edition includes all DLCs from the original along with new achievements, online multiplayer, and updated graphics.

Next on our list of the best RTS games on PC is Bad North, a challenging strategy roguelite with tower defense elements and cute low-poly graphics.

In it, you’re tasked with defending your small island kingdom against hordes of Viking invaders alongside the last remaining soldiers.

Islands are procedurally-generated and completely unique in layout and appearance, providing the perfect playground for battle-tested soldiers.

If you’re not put off by games with minimalist visuals, then you may enjoy Death Crown’s unique approach to small-scale RTS gameplay.

In it, you take on the role of Death herself as she wages war with humanity by summoning literal armies of the damned for 1-bit style battles.

Things start out simple enough as you use barracks to produce troops, mines to harvest gold, and towers to defend your structures.

It’s not long before battles escalate and begin posing a serious challenge that will test your might throughout the single-player campaign and local co-op.

Shadow Tactics: Blades of the Shogun is a strategic stealth game that sees you controlling a team of specialized spies with extraordinary abilities.

Set during the Japanese Edo period, it sees a new Shogun rising to power and enlisting a team of deadly assassins to help squash a rebellion.

Each mission has you combining your team’s long-range and melee weaponry with distraction tools and traps to take out targets and avoid detection.

Since they all have unique skill sets, you’ll have to decide which assassin is right for a particular task and devise different tactics to get the best results.

Blending RTS with city building, Northgard has you guiding Viking clans as they gather resources, construct homes, and live out their lives.

The game encourages you to expand your kingdom’s reach by capitalizing on strategic opportunities when your enemy is most vulnerable.

What sets it apart from other RTS games is its campaign structure exploring different scenarios and starting conditions across six unique factions.

If you’ve worked your way through all the classic RTS games and could do with something a bit more recent, Northgard is worth a shot.

Initially released as a Steam Early Access title, Driftland: The Magic Revival officially launched in April 2019 and has been making waves ever since.

Cited as one of the most innovative RTS games of the past decade, it sees you playing as a mage whose realm has become shattered into tiny floating pieces.

To reconnect them, you’ll have to restore each territory to its former glory by gathering resources, developing nations, and defending them from invaders.

While some aspects still don’t quite mesh with the game as a whole, Driftland is a great alternative for anyone left craving more fantasy RTS games.

Reimagining the series’ mechanics while serving as a prequel to the original Homeworld, Deserts of Kharak offers compelling storytelling and gameplay.

While many were skeptical of its ‘six degrees of freedom’ novelty at the time of the game’s release, Blackbird has justified its value across consistent updates.

The campaign is among the best the genre has to offer and often gets unfairly passed on when discussing the best RTS games on PC.

If you’re a fan of the series or simply can’t resist a good deal, we recommend picking it up with the Homeworld Remastered bundle.

Supreme Commander 2 is regarded as a classic that still holds up in 2023 for large-scale RTS battling with big machines.

However, the game shakes things up with more varied and interesting progression paths that allow you to research and create experimental units on the fly.

As a result, players can make a host of Frankenstein-like creations before unleashing them on the battlefield to see how much destruction and chaos ensue.

In terms of RTS games, Europa Universalis IV shares much of its DNA with games like Civ when it comes to getting ahead of your opponent.

Since the game is about overcoming historical imbalances, you’ll have to work tirelessly to keep other nations in check while still providing for your people.

The campaign can be quite lengthy, giving you plenty of time to come to grips with its systems and figure out how to outsmart the AI.

Additionally, battles are fought on a much smaller scale that requires players to spend more time micromanaging units than issuing general commands.

Company of Heroes is another classic RTS franchise that’s been around for decades and continues to redefine the genre in its own niche way.

Each installment centers on challenging campaigns in which players harness different tools to defend themselves or flank enemies in real time.

If you enjoy RTS games with war-themed settings, then you’ll feel right at home in Company of Heroes 2’s WWII-era battlefields.

While the online multiplayer can feel unforgiving for newcomers, you can opt to focus solely on the game’s single-player content.

Steel Division 2 is another WWII-themed RTS that’s sure to provide hours of entertainment while offering realistic and authentic war-time combat.

In it, players command Soviet forces during Operation Bagration where they’ll have to carry out historically-accurate battles across sprawling maps.

Due to the game’s massive scale, it can be easy to get sidetracked and forget about a particular battalion only to find them struggling and have to regroup.

This makes it one of the most demanding games on the market and perfect for hardcore RTS fans who crave challenge.

Only a handful of classic RTS series stack up to today’s games, no doubt a selling point of many upcoming remakes and remasters.

Among the best is Age of Empires II: Definitive Edition, which breathes fresh life into the 1999 classic while also improving on the HD edition released in 2013.

In it, you’re tasked with building a city to serve as a base for your army and wage war throughout the ages as you scavenge for supplies and build defenses.

There are several historical civilizations to play as, each with its own strengths and weaknesses that can lead to prosperity or hardship.

If you’re looking to turn your passion for wargaming into a highly organized, tactical operation, Wargame: Red Dragon is the perfect RTS game for you.

The campaign includes large-scale scenarios that feel weighty and unpredictable while depicting an alternate history where the Soviet Union never collapsed.

Like other war-time games, it features an abundance of land, naval, and air units to deploy that can also be moved and coordinated to break enemy lines.

With a total of 17 playable factions and over 1,400 units, Red Dragon can feel overwhelming at times, so make sure to brush up before heading into battle.

StarCraft holds a special place in the hearts of many RTS fans whose first exposure to the genre was through the now-iconic Blizzard game released in 1998.

In it, players create and defend galactic outposts from extraterrestrials while also exploring character-driven storylines throughout the campaign.

While the original set the tone and bar for the genre as a whole, Blizzard would later perfect the formula with StarCraft 2’s campaign and multiplayer modes.

These days, the sequel can be played for free, making it an appealing entry point for anyone who wants to play the best RTS games on PC. 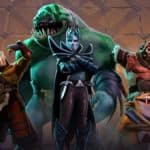