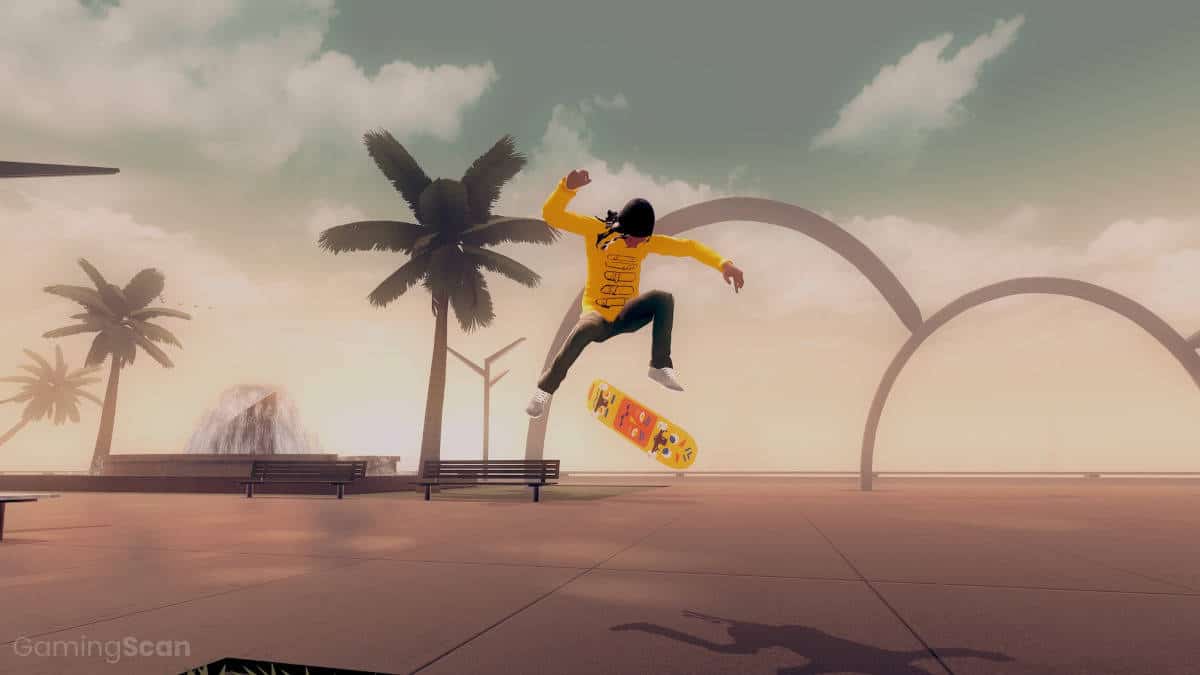 Video games can often feel crowded with many colorful UI elements, characters, and objects to keep track of as you traverse environments.

Thankfully, this isn’t always the case, as many games streamline their presentation and gameplay to feel as smooth and readable as possible.

Islanders is a city-building game that gets at the heart of minimalism by using a limited color palette, sleek UI, and simplified mechanics.

In it, you create beautiful procedurally-generated towns without any of the resource-management busywork typically associated with the genre.

Instead, the game allows you to shift your attention towards building and growing your villages into sprawling cityscapes by strategically placing different tiles that count towards a final score.

Skate City is a 2.5D arcade skateboarding game with easy-to-use controls and visually appealing 3D graphics despite playing like a side-scroller.

In it, you play as a customizable skater coasting through three levels based on iconic real-world skate spots in Los Angeles, Oslo, and Barcelona.

What sets Skate City apart from other skateboarding games like THPS, Skater XL, or Session is its minimalistic trick system, which lets you combine different moves simple inputs.

Created with minimalists in mind, Klocki is a chill and relaxing puzzle game that incorporates a lot of pastels and well-defined shapes into its art style.

Each logic puzzle sees you manipulating blocks and tiles in order to complete paths and trigger atmospheric animations.

As you progress, new mechanics and shapes are introduced, forcing you to use new approaches without raising the difficulty too much.

Superhot sets itself apart from traditional FPS games by introducing one clever mechanic: time only moves forward when you do.

This provides the player with ample time to assess threats and determine the best course of action before setting it in motion with stylish shootouts and melee showdowns.

To ensure combat is always readable, the game employs a minimalist art style that does a great job at conveying info: enemies are always red, environments are white, and weapons are black.

Return of the Obra Dinn is an engaging detective game that manages to create a strong sense of atmosphere despite having minimalistic visuals.

You play as an insurance adjuster investigating the disappearance of a ship’s crew using a time-traveling pocket watch that lets you replay the moments leading up to someone’s death.

This tool allows you to piece together clues and draw conclusions about what happened to each crewmate throughout the ship’s epic voyage.

From the creators of What Remains of Edith Finch, The Unfinished Swan is a minimalist adventure game about a boy trying to find a swan that escaped a painting.

The story is a metaphor for the main character’s relationship with his mother, who was a painter and recently passed away.

Gameplay has you exploring surreal 3D environments, solving puzzles, and splatting paint to reveal the hidden kingdom that surrounds you.

Baba Is You is a minimalist puzzle game that uses interactable objects to represent its mechanics in real-time, allowing you to manipulate the game’s logic.

For example, you encounter a solid wall that needs to be passed in order to collect a flag, with the words ‘Wall Is Stop” located nearby, so you remove the word ‘Stop’ from the chain to pass through. While the game quickly ramps up in difficulty, the simple visuals and level layouts free up your screen’s real estate so you can focus on solving each puzzle.

Mini Metro is a minimalist, strategy-based puzzle game that tasks you with designing the subway layout for bustling cities around the world.

You start out each map with three stations that you connect by drawing routes that serve as subway lines, with a limit to the number of commuters each station and train can hold.

This forces you to think carefully about placements and adjust routers to avoid delays and make sure everything runs as smoothly as possible.

The great thing about minimalist games is they tend to hold up a lot better as the years go by; such is the case with So Far So Good’s casual rhythm sandbox Incredibox.

Part game, part tool, it lets you create tracks using beatbox samples across 8 different music styles, which can be dragged and dropped into your mix at any time.

It has a very sleek, stylized presentation and even gives you the option to save, download, and share mixes online with other people.

Inside and its predecessor Limbo are great examples of minimalist puzzle-platformers, so if you’re a fan of the genre, definitely keep an eye out for any future projects from developer Playdead.

In it, you play as a mysterious unnamed boy tasked with exploring a strange facility with multiple floors and areas that can only be reached by solving a series of platforming puzzles.

Each obstacle introduces a new mechanic that builds off of the previous one while working within the confines of a 2.5D side-scroller.