If you’re shopping for an upper mid-range card in 2020, chances are good that Nvidia’s RTX 2060 Super might catch your eye. But there are quite a few variants of this GPU available for purchase, so which are worth getting, what differs from model to model, and are the pricier ones even worth considering?

Read on, as we will not only provide a selection of the best RTX 2060 Super models that you can get at the moment, but we will also answer some common questions you might have regarding this subject! 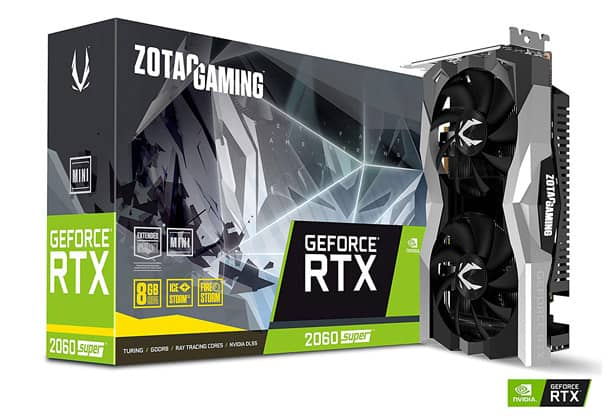 Kicking off the list, we have a highly compact RTX 2060 Super model coming from Zotac, and it’s probably the smallest RTX 2060 Super that you’ll come across, making it ideal for those who want to build a more compact gaming PC.

The card looks pretty much what we’d expect from Zotac’s more affordable newer models, featuring a predominantly gray shroud with some sharp angles, a design that we’re personally not very fond of but that will work in most builds. However, it also has a sleek metal backplate, so you can tell there was no major corner cutting involved.

Now, the card also has solid cooling, featuring two fans and a thick heatsink which help improve the overall cooling efficiency. However, this is one of the hottest-running RTX 2060 Super models out there, as it can go as high as 76 degrees Celsius under load, which is about the same as the Founder’s Edition variant. However, the fans are also louder than those on the FE RTX 2060 Super, so rest assured, you won’t be buying the RTX 2060 Super because it’s cool and quiet.

That said, with its temperatures, fan performance, a 1650 MHz boost clock, and a price of $399, this Zotac model is a good alternative to the Founder’s Edition RTX 2060 Super if you’re looking for a compact graphics card, but in virtually all other departments, it lags behind the competition. 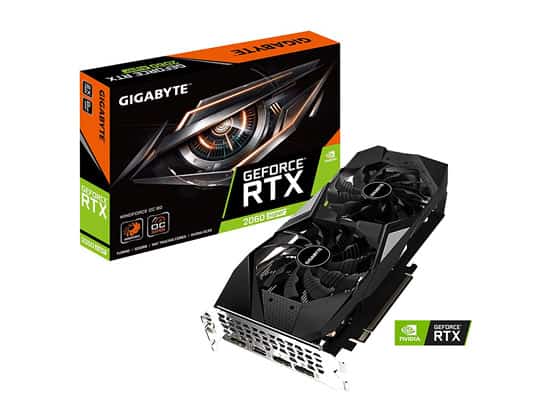 If you’re looking for an RTX 2060 Super that doesn’t go beyond the official MSRP but one-ups the reference card in regards to performance, look no further than this model coming from Gigabyte!

The Gigabyte RTX 2060 Super Windforce OC boasts the same exterior design as the original RTX 2060, featuring a predominantly black shroud that lacks the conspicuous orange highlights that were the staple of earlier Gigabyte models. As such, the card is quite neutral and will blend in well with most builds.

More importantly, the dual Windforce fans do a good job at keeping the card cool, although it can still go over 70 degrees Celsius when under heavy load, but this is understandable considering that it can also hit higher clock speeds than the reference model. The noise generation, however, is about the same as with Zotac’s previous model.

In any case, with its solid performance and approachable price tag, the Gigabyte RTX 2060 Super Windforce OC is definitely a better pick than either the reference model or the Zotac Mini variant, provided that you don’t really need a more compact graphics card. 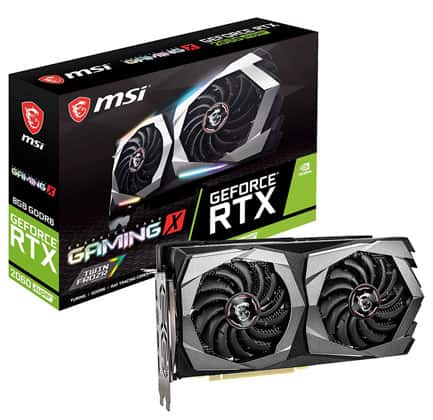 Moving on, we get to a card that is a tad pricier but also adds some extras to make up for the price increase: the MSI Gaming GeForce RTX 2060 Super.

Aesthetics-wise, we weren’t big fans of MSI’s older designs, as we feel they overused red highlights to the point where it just made the card feel overly gaudy and cheap. However, the company did a complete 180 on this, as their newer graphics cards feature less conspicuous shades of gray. And in the case that you want colored highlights, you can always use the cards excellent RGB lighting.

But it’s not just the design that MSI nailed with this model – the performance definitely doesn’t disappoint either! The card runs remarkably cool even when under heavy load, just over 60 degrees Celsius, which is much better than the Founder’s Edition and either of the previous two models. Not only that, but it can also hit higher clock speeds and it is very quiet. That said, this graphics card pretty much has all the bases covered when it comes to performance.

With all of the above in mind, the MSI RTX 2060 Super is a great pick if you’re looking to get good value for your money. True, it is about $20 above the MSRP, but we feel that this isn’t too big of a sacrifice considering how good the performance, the cooling, and the RGB lighting are. 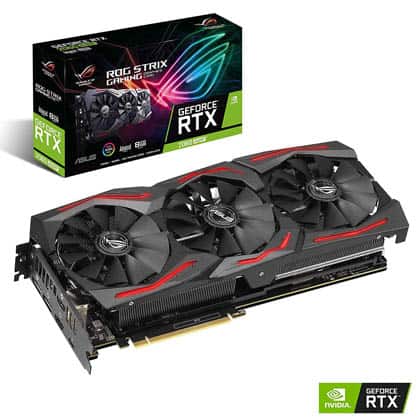 And finally, for the last entry, we have a more serious performance-oriented solution coming from Asus – the ASUS ROG Strix GeForce RTX 2060 Super.

Unlike Zotac, Gigabyte, and MSI, Asus didn’t update their graphics card design yet, and we feel that a redesign is long overdue. With its modest shroud and somewhat basic RGB lighting (for 2020), the Strix model doesn’t feel quite as premium as MSI’s Gaming X version at first glance, even though it ultimately performs better.

Speaking of performance, that triple-fan cooler is no joke. While the noise levels and temperatures are about the same as the MSI Gaming X RTX 2060 Super, this Asus RoG Strix model offers better overclocking performance, something that is evident from its hefty 1860 MHz default boost clock.

Of course, the extra performance does come at a price, and this particular model usually goes for about $450, which is quite a bit higher than the $399 MSRP. When overclocked, this card can get you 10% more frames-per-second on average compared to the default reference settings, so whether this boost in performance is worth the extra $50 is entirely up to the user.

How To Pick The Right Card For Your Needs

Considering all of the above, you can see that there are a few factors to keep in mind when shopping for a new GPU – that is, when it comes to deciding between different versions of the same GPU. 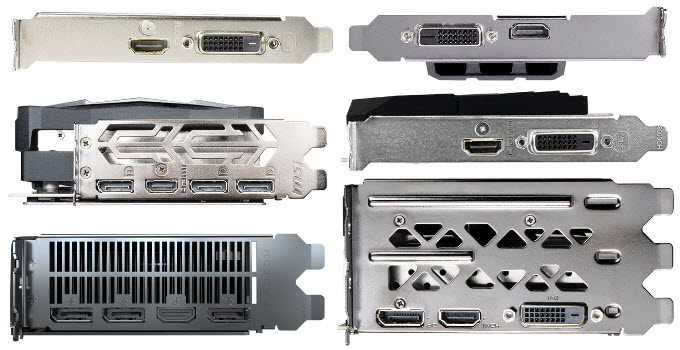 When trying to determine whether a graphics card can fit inside a case, the length and the width of the card are the two dimensions you should keep in mind.

Cards that are longer, either due to a longer PCB or a longer cooler/heatsink might have trouble fitting inside some cases, while wider cards, i.e. those that take up more vertical slots, might obstruct some slots on the motherboard, thus preventing you from installing some additional PCIe expansion cards.

Of course, wider cards might also have trouble simply fitting inside smaller cases but even if they can fit, if the card is positioned close to the bottom of the case, this might reduce its air intake, thus reducing airflow and hindering its cooling efficiency. As such, even if a card can fit inside the case, there should be some room below it to allow for good airflow. 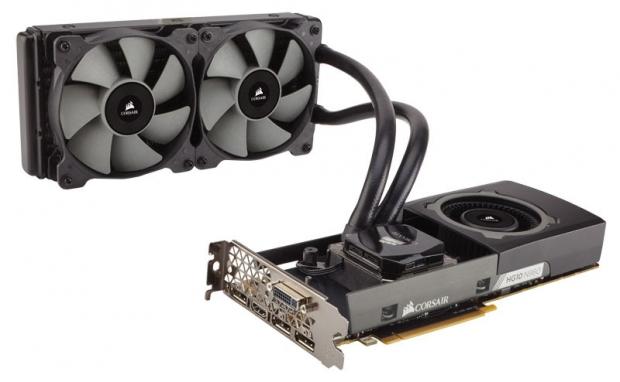 Open-air coolers are the most popular by far, and all the graphics cards currently listed in this article utilize open-air coolers. This is because this particular type of cooler is usually the best solution for most PCs – these coolers feature an open heatsink and use one, two, or three fans to push cool air through it. This allows for better airflow and heat dissipation, and if a card uses open-air cooling, the cooling efficiency can further be boosted with some case fans.

In contrast, blower-cooler cards feature only a single fan and a closed heatsink. They suck cool air in and expel hot air out the back of the card, thus preventing hot air buildup inside the case. That said, blowers are very good solutions for smaller and more cramped cases that have limited airflow, but they are louder and less efficient than most open-air coolers. On top of that, they don’t benefit as much from case fans, which is why they aren’t as popular when it comes to larger cases.

Finally, liquid cooling is the most efficient when it comes to overclocking and maximizing heat dissipation. However, the cards that utilize liquid cooling are usually a fair share pricier, which is why they are mainly implemented in high-end models and sold as aftermarket solutions. 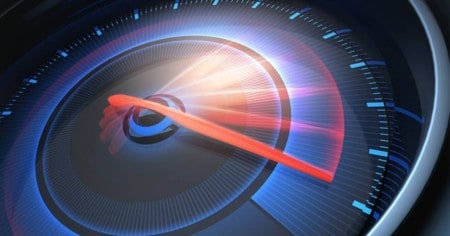 One of the main advantages of having better cooling in a graphics card is being able to increase the GPU’s clock speed beyond the default, which equates to better in-game performance. But how much extra performance can you realistically squeeze out of the GPU this way and is it worth the extra expense?

Well, we’ve already mentioned in the brief overview of the Asus RoG Strix RTX 2060 Super that, when overclocked, the card outperforms a reference model by roughly 10%. 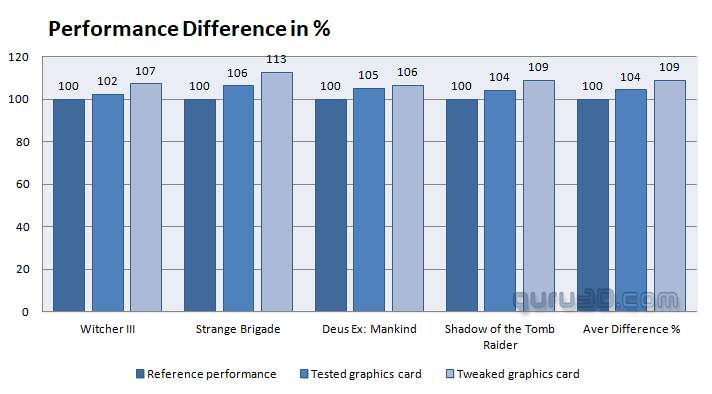 The above benchmark from Guru3D showcases roughly what kind of difference in performance you can expect when comparing the reference clock (1470 MHz), the default boost clock on the aforementioned Asus model (1860 MHz), and a further tweaked clock (2025 MHz).

As before, the performance boost will vary from game to game. So, while getting extra 5 FPS in a demanding AAA game may seem trivial, a 10-15% performance boost that you might get in a less demanding title could smooth out your performance and get you a more stable framerate, which is worth keeping in mind if you’re aiming at triple-digit framerates with a 144 Hz monitor. 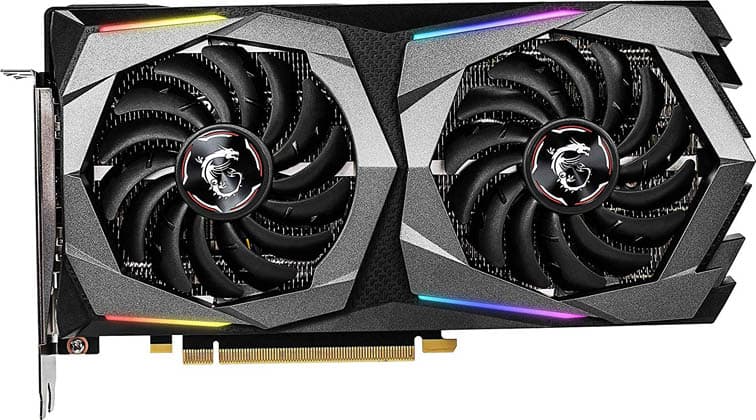 As always, it’s difficult to highlight the single best products, as there are multiple key factors to consider depending on an individual’s needs and budget constraints.

If we had to choose, we’d say that, overall, the MSI’s RTX 2060 Super is the best model currently available, seeing as it pretty much has it all: high clock speeds, low temperatures, low noise generation, RGB lighting, and it only costs slightly more than the MSRP.

However, the other models listed here have their own merits, too. As mentioned before, the Zotac card is good for smaller cases, the Gigabyte one is a better pick if you’re pinching pennies, and the Asus model is the best choice if you’re looking for the best performance you can get out of the RTX 2060 Super.