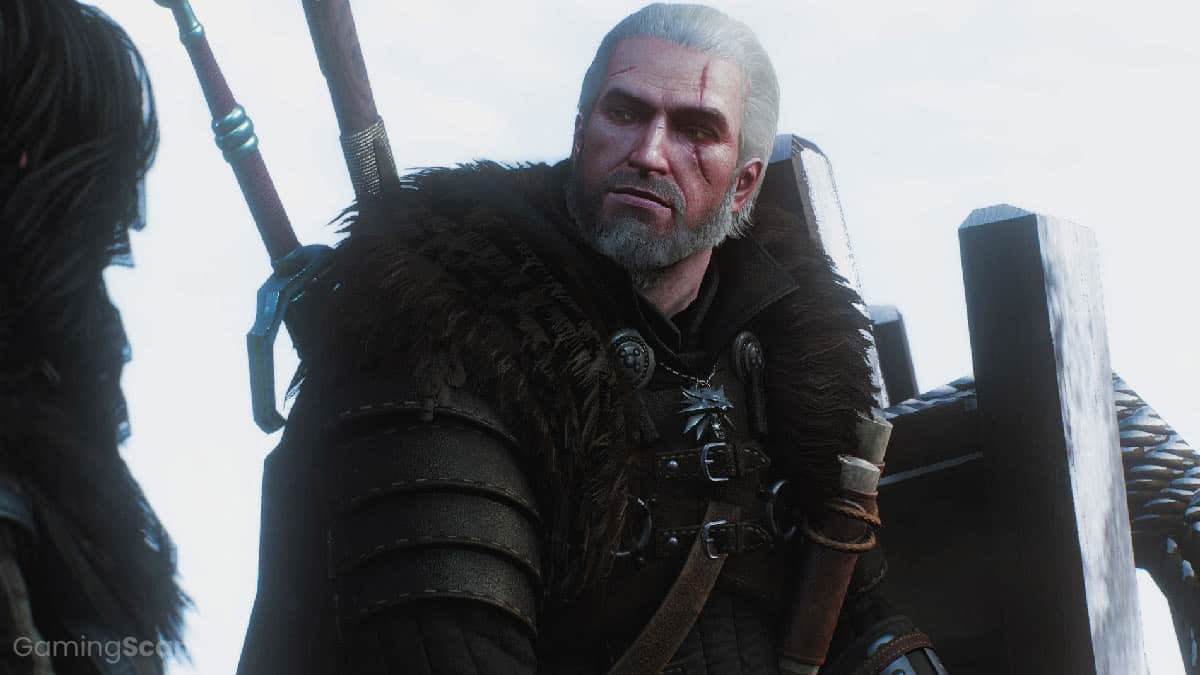 As far as open-world RPGs are concerned, The Witcher 3 is in a league of its own, especially if you have the proper setup to play it on PC.

Doing so gives you a ton of control over how the game looks and plays while allowing you to mod The Witcher 3 to your heart’s content.

In this list, we’ll highlight the best Witcher 3 mods to improve the game’s visuals, combat, progression, and a host of other areas.

We hope you’ll find at least one new Witcher 3 mod to bring with you on your next journey through the Continent!

How to Install Witcher 3 Mods

Before starting your modding adventure, you may want to brush up on the install process for Witcher 3 mods provided below: 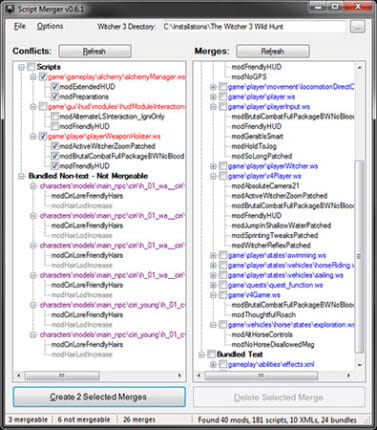 Anyone who’s spent enough modding will know just how messy things can get when you have mods that are broken or conflict with one another.

And while there’s no catch-all solution should one of your mods break, The Witcher 3 Script Merger should alleviate most of those concerns.

This tool is designed to detect and resolve conflicts between mods, either by creating merged files that override conflicts or setting up a custom load order for your mods. 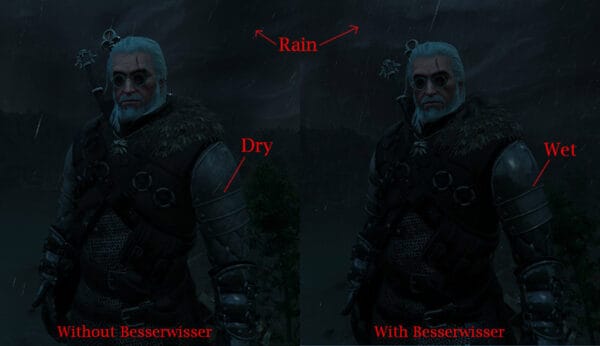 These days, it’s not uncommon to see games released with various graphical and gameplay bugs that detract from the overall experience.

More often than not, these end up getting addressed by the developer in a later patch but there are also instances where the game’s community steps in.

Such is the case with Besserwisser’s Fix Collection, a community patch for The Witcher 3 that resolves a host of minor, yet annoyingly persistent issues in the vanilla game. 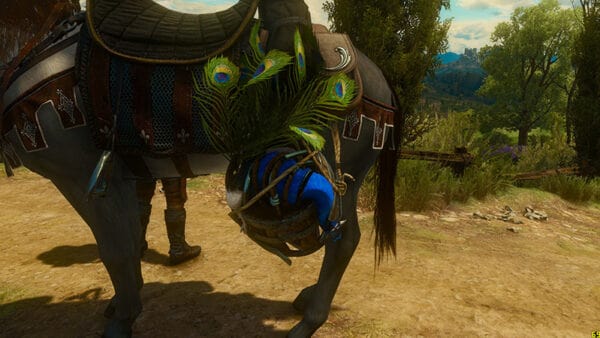 Taking on The Witcher 3’s toughest monsters rewards you with trophies commemorating your achievement while bestowing Geralt with certain buffs.

The only problem is, the buffs can feel pretty lackluster and do very little in the way of making Geralt more powerful.

To address this, we recommend installing the Better Trophies mod, which assigns each trophy a 5% attack damage bonus for its respective enemy on top of other unique bonuses. 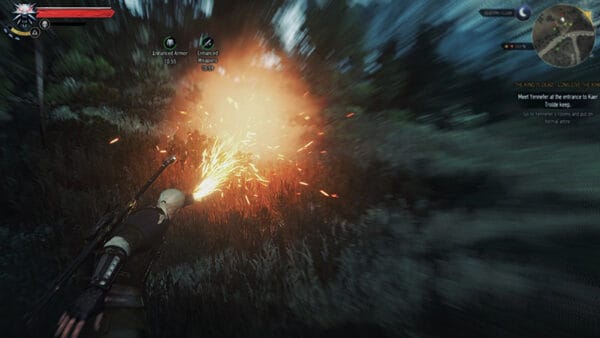 The quality of The Witcher 3’s visuals is already well-documented, with many considering it one of the best-looking games of all time.

However, one area that could stand to benefit from a visual enhancement is Signs, which see Geralt casting powerful magic attacks on his foes.

They come across as quite tame in-game but with a mod like Improved Sign Effects, you can make their effects look and feel more intense. 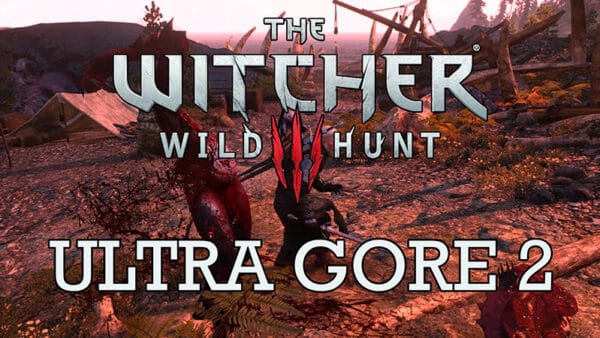 If you’re particularly squeamish or faint of heart, you may want to skip past this next mod suggestion, or at least not say we didn’t warn you.

The goal of Ultra Gore 2 is to up the visceral quality of The Witcher 3’s combat to allow for more gruesome and satisfying battles.

This includes making it so that every killing blow Geralt lands will dismember the enemy and send their limbs flying across the battlefield. 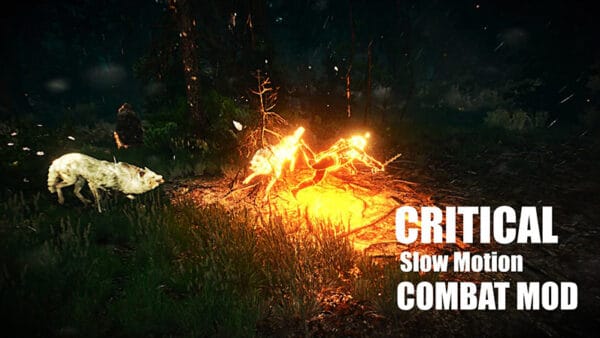 To get a good look at that bandit’s head you just decapitated, we suggest using the Critical Slow Motion Combat mod.

Once installed, it makes it so the game slows down anytime Geralt lands a critical hit, leading to satisfyingly cinematic moments.

To get the most out of this mod, consider pairing it with KNGR’s More Blood mod and the aforementioned Ultra Gore 2. 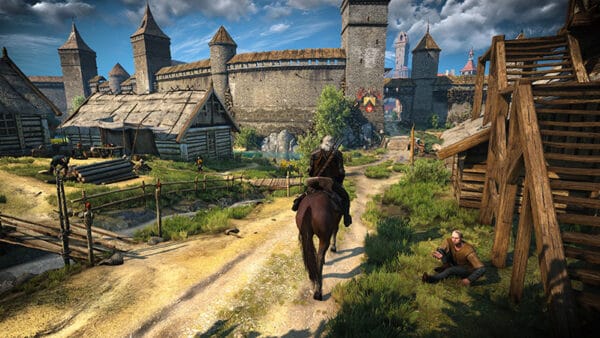 For those captivated by The Witcher 3’s E3 reveal, the final look of the game is a far cry from what was initially pitched.

However, with the luxury of modding, you can restore the original lighting with the aptly named Super Turbo Lighting mod.

It changes the lighting for all zones in The Witcher 3 to better reflect the original E3 demos that were shown all those years back. 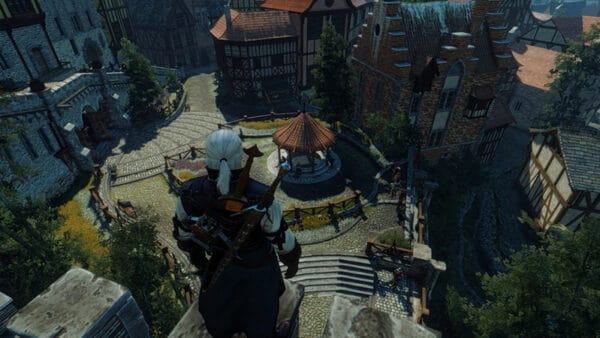 Taking fall damage in video games is often a point of debate among gamers, and for good reason, as it makes absolutely no sense in certain titles.

When you consider Geralt’s ability to stand toe-to-toe with giant monsters and wield powerful spells, the thought of him dying from the smallest drop is ridiculous.

To remedy this, we suggest using the No Fall Damage mod so that Geralt may once and for all live out his wildest parkour fantasies. 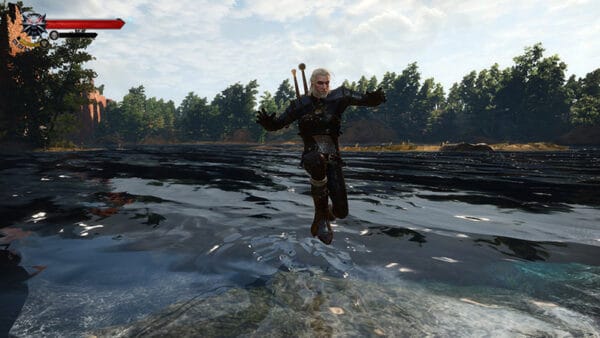 I believe I speak for all Witcher 3 players when I say that getting Geralt stuck in shallow water is one of the most annoying parts of the game.

This is further compacted by the fact that it can happen in even the smallest pools of water when he’s barely submerged.

Thankfully, you can now get rid of this issue altogether with the Jump in Shallow Water mod by Zhior. 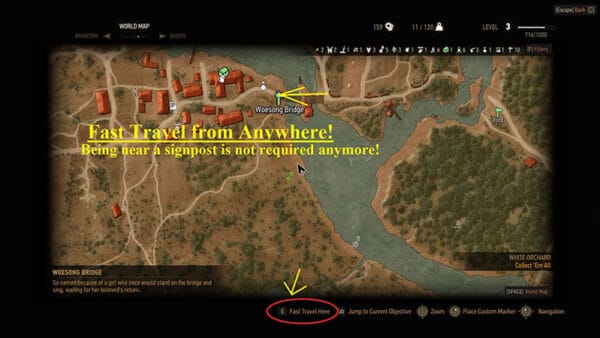 Fast traveling in games is meant to be a convenient feature that reduces the amount of tedious busywork for the player.

However, CD Projekt Red must have not gotten the memo when designing The Witcher 3’s fast travel since its usage is directly tied to signposts throughout the world.

The good news about modding is that you no longer have to play by the game’s rules and install a mod that lets you Fast Travel from Anywhere. 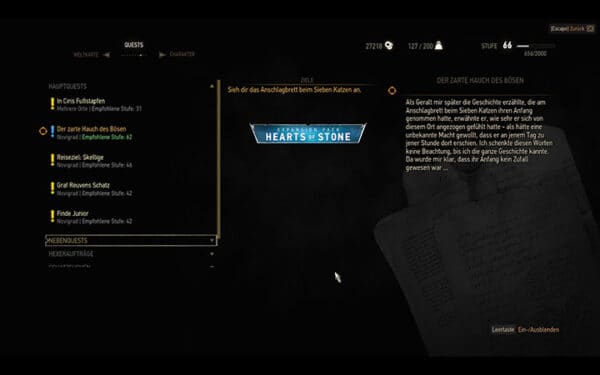 For a game as narratively fulfilling as The Witcher 3, the rewards for completing certain quests can feel quite abysmal, especially if you’re overleveled for the task at hand.

To tip the scales in your favor, try installing the Always Full EXP mod, which offers balanced options for ensuring you’re fairly compensated for your hard work.

Quest EXP rewards are set to 100% by default on Easy/Normal difficulties, with 90% EXP on Hard and 80% EXP on Deathmarch. 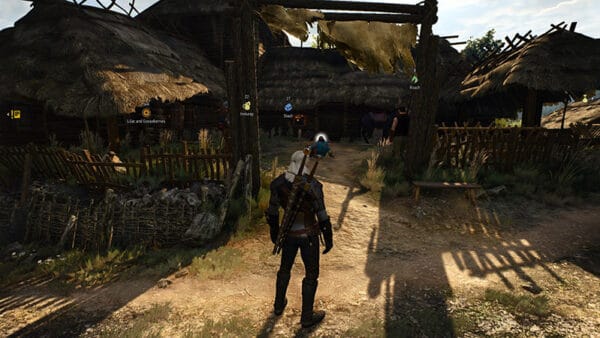 Open-world RPGs are known to dump a lot of information on the player at any given time, and The Witcher 3 is no exception.

So while the default HUD may be serviceable, there’s definitely room for improvement with a mod like Friendly HUD.

It offers extensive options for customizing The Witcher 3’s HUD elements and layout, including the ability to set 3D markers for quest and NPC tracking. 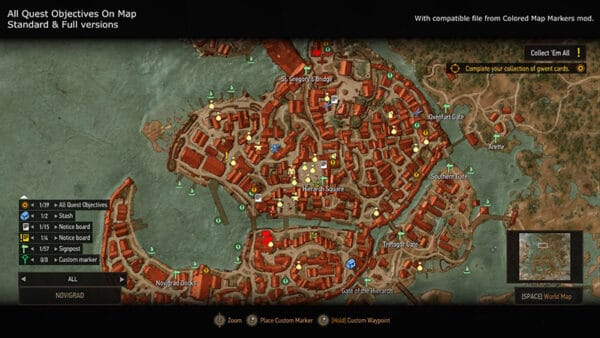 See All Quest Objectives On The Map

Mod: All Quest Objectives On Map

Piggybacking off of the previous mod, All Quest Objectives On Map makes the pain of tracking every Witcher 3 quest a thing of the past.

With it installed, you’ll be able to track multiple quest objectives on the map without feeling overwhelmed or confused by the sheer number of things to do.

What’s more, the mod lets you switch to displaying your currently active quest objective with a simple press of a button. 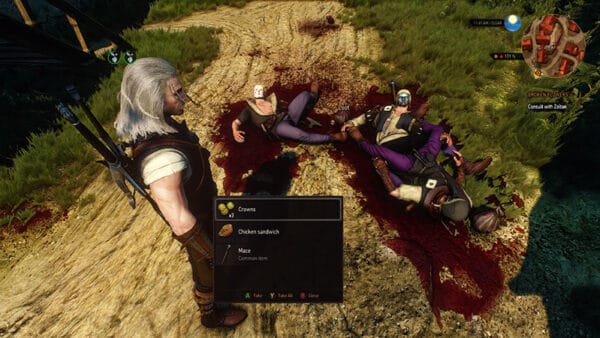 Having to grind for experience and rewards is not only common but generally the standard for RPGs like The Witcher 3.

With that said, the game can be a little stingy when it comes to doling out rewards for slaying monsters and other enemies.

With the Increased Creature Loot mod, you can increase the total amount of loot that drops from monsters, animals, and even humans. 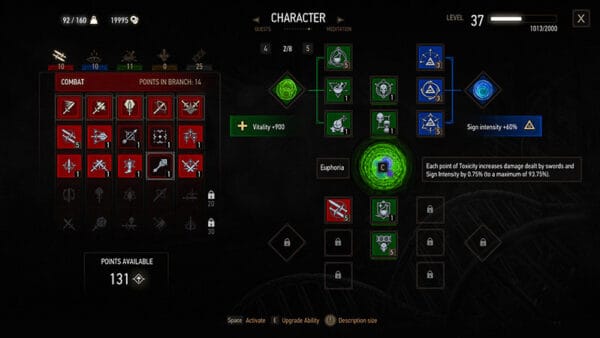 In an effort to create a more balanced experience, The Witcher 3 places a tight limit on the total number of skill slots and active mutations afforded to the player.

This is unfortunate for players looking to push Geralt’s combat abilities to the ultimate limit and feel like a truly powerful Witcher.

To lift this restriction, you can use a mod like Slots Slots Slots, which raises the cap for skill slots and mutations to 100 or higher depending on your configuration. 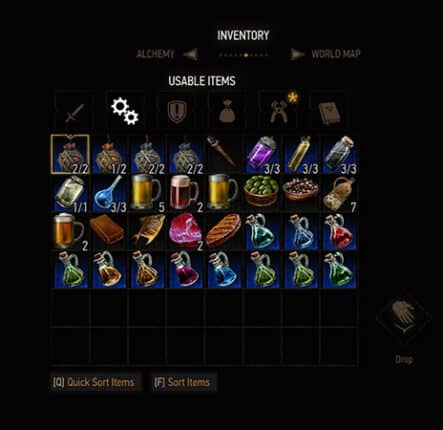 One of the more interesting mechanics in The Witcher 3, oils can be a strategic tool to aid you in fighting certain enemies throughout the world.

The only problem is, the process for applying said oils is rather tedious, requiring you to open up the menu, select the relevant oil, rinse and repeat.

However, you can speed up the process drastically with SheepDarklord’s Auto Apply Oils mod, which does exactly what it sounds like anytime Geralt enters combat. 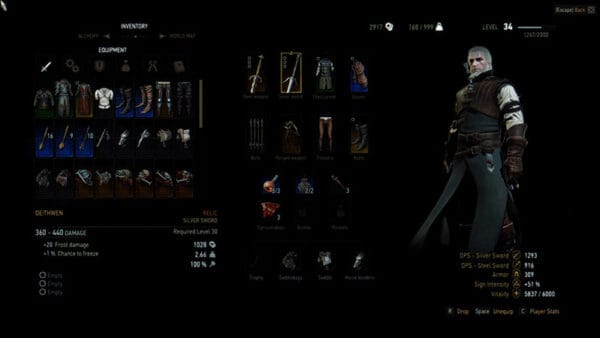 Aside from a few rare exceptions, weapon durability has no place in video games as it provides no value other than creating more work for the player.

Whether or not you agree, there’s a good chance you’ve found yourself annoyed by how The Witcher 3’s implementation of said system.

If that’s the case, feel free to stop torturing yourself and remove weapon degradation entirely using a mod like Indestructible Items. 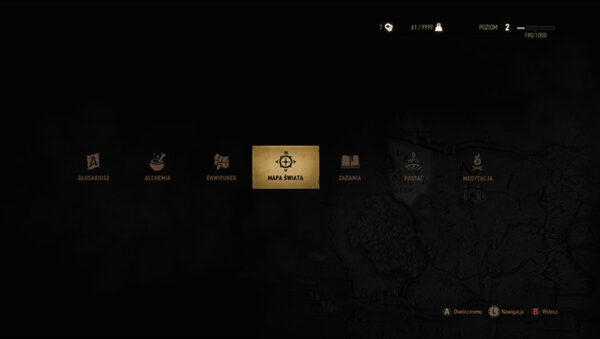 Carry As Much As You Want

Right alongside weapon durability, placing weight limitations on how much gear your character can carry is yet another video game mechanic we can generally do without.

Its presence in The Witcher 3 isn’t the worst implementation but becomes increasingly annoying the more you explore.

To do away with it, we recommend using Over 9000, a mod that changes Geralt’s weight limit to 9000, effectively making it so you never have to worry again. 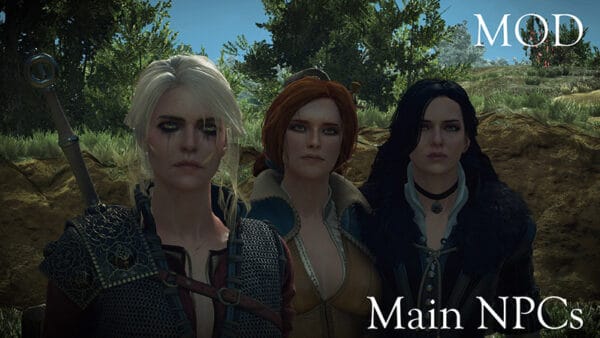 Compared to other games released during the same time and even a couple of more recent titles we won’t mention by name, The Witcher 3’s graphics still hold up in 2023.

Of course, like any game a few years removed from its release window, there are some areas for improvement, most notably the facial quality of its character models.

For those interested, the High Quality Faces mod is going to be your best option for improving the LOD and quality of every face in the game. 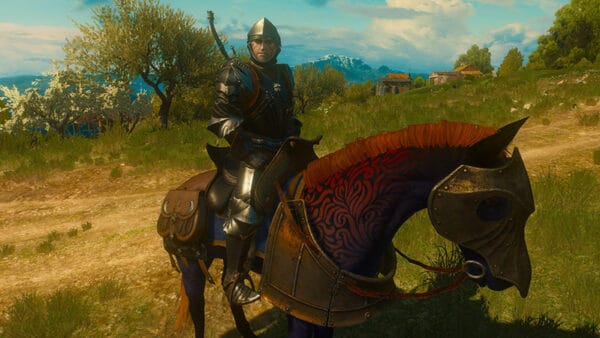 Considering The Witcher 3’s limited cosmetics, a mod like The Appearance Menu is essential to living out your dreams of becoming a trendsetting Witcher.

Once installed, it allows you to change the appearance of Geralt’s hair, beard, face, head, capes, shoulders, and accessories as well as give Roach a new look.

While these items will replace your currently equipped armor, they don’t have any actual impact on your stats. 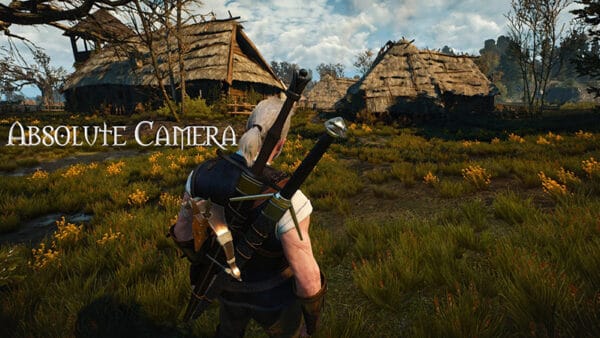 If you’re unsatisfied with The Witcher 3’s vanilla third-person camera placement, this next mod will do you some good.

Created by pMARK, the Absolute Camera mod lets you adjust the camera distance and angle until you find something that works.

What’s more, it includes a wide range of customizable options for setting custom cameras for specific activities such as swimming or climbing ladders. 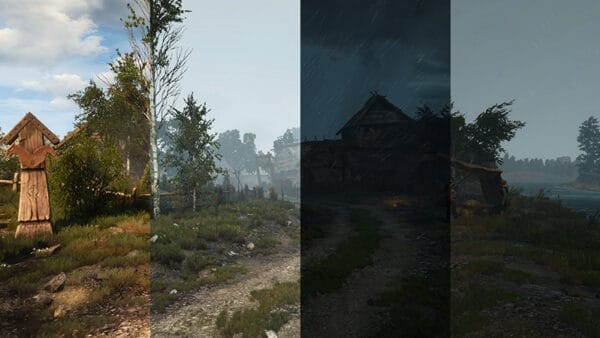 Weather is another aspect of The Witcher 3 that could stand to benefit from some improvements via modding.

One of our favorites for this task is Realistic Weather, which changes the way that “bad” weather looks while adding more snow, fog, rain, and storm effects.

Seeing it in action is an absolute game-changer but does require you to have the Blood and Wine expansion to get it up and running. 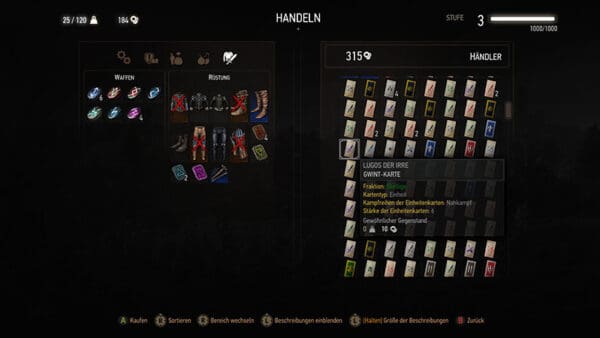 Those looking to complete their Gwent collection without having to travel all over the world can use The Gwent Card Dealer mod to speed up the process.

It does this by turning the Baron’s quartermaster into a certified card vendor with an extensive Gwent collection for you to browse through.

The quartermaster’s usual wares are still present but now joined by practically every card in the game, allowing you to fill out your decks more quickly and easily. 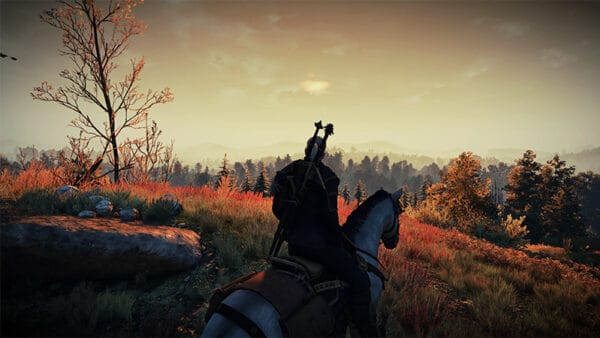 To wrap up this list, we’re including a popular visual overhaul mod for The Witcher 3 that swaps out numerous in-game models and textures with higher-quality versions.

Without a doubt one of the more ambitious entries on this list, The Witcher 3 HD Reworked Project by HalkHogan replaces various rocks, trees, roofs, walls, floors, and more.

The improvements to item resolution and brightness are immediately noticeable but to fully admire this mod, we suggest taking a trip around Novigrad. 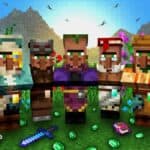 What Are Nitwit Villagers In Minecraft?
Related Topics Tags