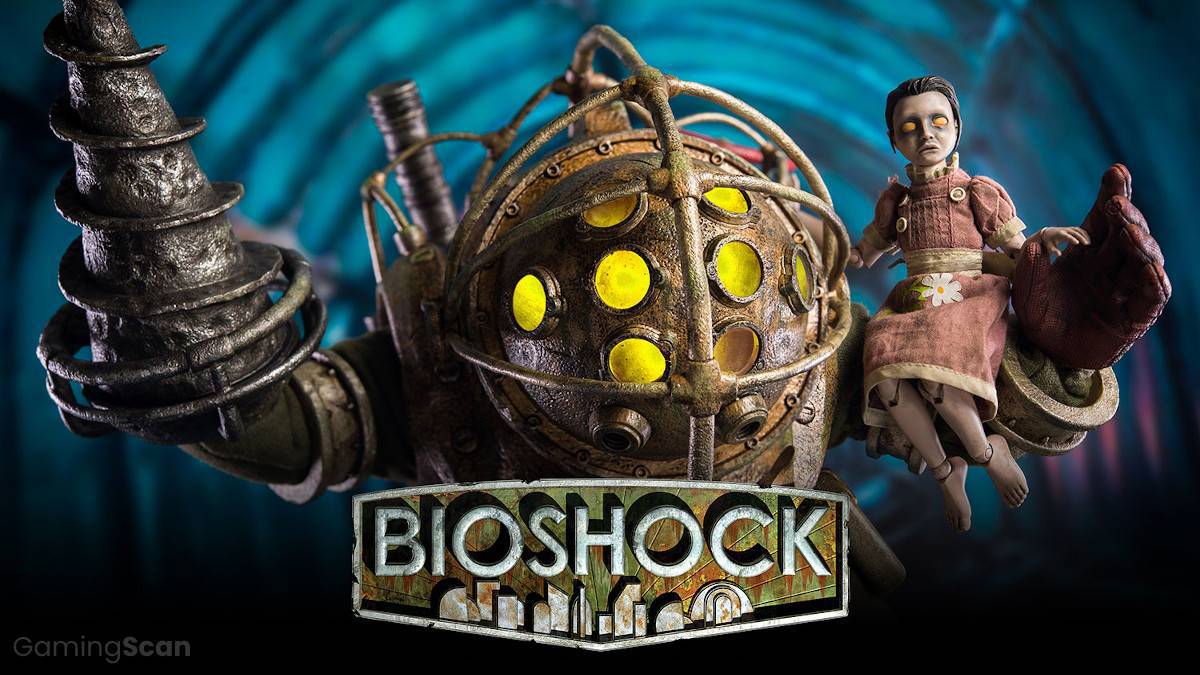 Few games have been as influential as BioShock, and even fewer manage to maintain momentum and quality as the franchise grows and reaches a broader audience. What made the original BioShock special? How did the sequels expand upon it? What does the future of the franchise look like? 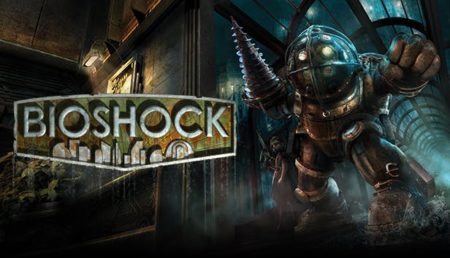 There was virtually nothing unremarkable about the original BioShock. Starting from the story and the premise, to the fantastic art direction and engaging gameplay mechanics that combined FPS and RPG elements into a compelling whole, BioShock is arguably one of the best games ever made.

The game places the player in the shoes of a reticent protagonist named Jack, who, after surviving a plane crash in the middle of the Atlantic Ocean, discovers the underwater city of Rapture. This anarcho-capitalist dystopia is undoubtedly one of the most extraordinary and memorable settings ever conceived.

Once Jack finds this underwater paradise-turned-hell, he teams up with a mysterious voice on the radio who introduces himself as “Atlas,” enlisting Jack’s aid in a quest to rescue his family and kill Andrew Ryan – the city’s founder who had become a tyrant in his libertarian utopia.

Jack has to face hordes of splicers – the city’s inhabitants who had devolved into violent addicts, dependent on the gene-altering substance known as ADAM – and takes on the significant challenges posed by the game’s signature enemies: the Big Daddies. These are the unyielding protectors of Little Sisters who harvest and recycle ADAM around Rapture.

The game’s plot features multiple complex layers, dealing not only with morality and politics, but also delving into sociological, psychological, and philosophical topics.

As mentioned above, BioShock features a dynamic mix of FPS and RPG elements, featuring several weapons commonly presented in old school shooters while spicing things up with various “superpowers” in the form of plasmids. Enemies, including the weaker ones, are quite resilient, and ammo is not always in ample supply. Therefore, the player has to be smart and make full use of their arsenal to overcome Rapture’s many challenges, especially on higher difficulty levels.

Most enemies in the game are splicers, who come in several forms. These include melee, firearm, and grenade-armed splicers, stealthy Spider Splicers who can scale walls, those who use both ranged and melee attacks and take considerable amounts of damage, and Houdini Splicers who take on the player with illusions, teleportation, and plasmids.

Apart from them, there are also the signature (mini)bosses – Big Daddies, who come in both melee (Bouncer) and ranged (Rosie) forms. They are the hardest enemies to kill, but they also offer the best rewards, as they are the sole guardians of the Little Sisters that the player needs to rescue or harvest to obtain ADAM and new abilities.

Overall, BioShock is one of those rare games that manage to have a lasting impact. Not only is it an amazing experience under nearly every point of view, but it also played a pivotal role in helping video games break into the mainstream and become a legitimate artistic medium. 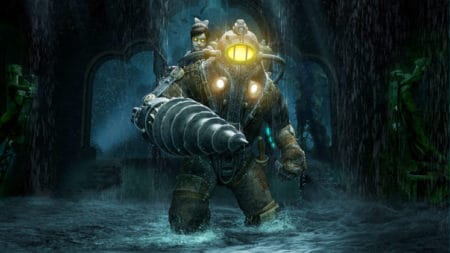 Following in the footsteps of the original game, the sequel – BioShock 2 – was released in 2010. This game takes place in Rapture as well, following the original game’s events. Yet, there is a twist – this time around, the player assumes the role of a Big Daddy.

The game opens with a familiar scene – a Big Daddy escorting and protecting a Little Sister. Only this time, the player views the process through the eyes of the iron-clad guardian. After a brief glimpse of what Rapture looked like before the fall and after a violent encounter with a splicer gang, the protagonist is forced to shoot himself in the head by the game’s primary antagonist, Dr. Sofia Lamb, whose daughter – Eleanor Lamb – was transformed into a Little Sister.

The protagonist, known as Delta, is an early Big Daddy prototype, bonded to a single Little Sister. He is revived years after his Little Sister is gone, and embarks on a quest through the dilapidated environments of Rapture.

Splicers remain the most common enemies, and all the five types make a return in BioShock 2, though there are more (mini)boss enemies this time around. These include three new kinds of Big Daddy – the mine, grenade, and turret-equipped Rumbler, Delta’s own Alpha Series colleagues, and the Big Sister, who keeps all the toughness of a Big Daddy while being far more agile. On top of that, there is a particular type of Big Daddy called the Lancer, introduced in the Minerva’s Den DLC and which uses a powerful ion laser as its primary weapon.

Ultimately, BioShock 2 feels like BioShock, though the player character is, ironically, nowhere near as impervious to damage as regular Big Daddies are. Furthermore, the quest for gathering ADAM no longer comes down to killing Big Daddies, as the player can actually “adopt” and escort Little Sisters on their mission to harvest ADAM as a means of getting extra ADAM from them.

At the end of the day, though it is a great-looking, high-quality game in its own right, BioShock 2 felt like something of a lukewarm sequel to the original BioShock. Of course, it’s always difficult for a sequel to measure up to the original, especially if the original sets the bar so high. It doesn’t manage to pull off the atmosphere that the first game did, but many feel that the gameplay had been streamlined and improved.

Just like the original, BioShock 2 was initially released for the PS3, the Xbox 360, and the PC, and was subsequently ported to the PS4, the Xbox One, and re-released on PC as a remaster. Meanwhile, only the original version of the game was made available for macOS in 2012. 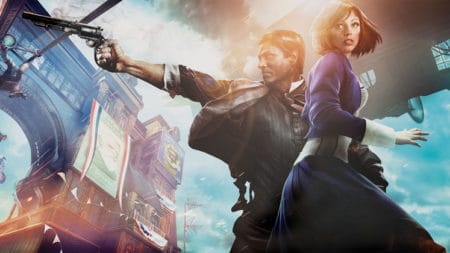 The third BioShock game, BioShock Infinite, was a prequel to the original game. It featured a new setting that stood in stark contrast to the damp and occasionally claustrophobic environments of Rapture, with a refreshed gameplay adapted to the growing popularity of fast-paced FPS games. However, many felt that Infinite’s most considerable merit lays in its plot and storytelling.

BioShock Infinite takes place in 1912 in the American floating city of Columbia. The open, bombastic steampunk environments are the complete opposite of Rapture’s gloomy underwater halls and corridors, while the themes present in Infinite are appropriate for the time and setting. Mainly, it deals with theocratic rule, capitalism, and racism, but it touches upon many other subjects as well.

The protagonist, Booker DeWitt, is a former detective and war veteran who was hired by two mysterious figures to rescue a girl named Elizabeth from Columbia and will accompany the player for most of the game. Yet, although the Big Daddy-Little Sister relationship may echo here, Elizabeth is far from a helpless ADAM harvester, as she wields strange space-warping powers that can be utilized in combat, providing the player with useful advantages.

Ultimately, BioShock Infinite feels more plot-heavy than either of the two previous BioShock games. It is understandable, considering that the protagonist is not silent, and the game’s plotlines wrap up remarkably well. However, discussing them in greater detail would potentially spoil some of the surprises that the game has in store.

As mentioned in the intro, BioShock Infinite revamps the combat system to make it fast-paced and streamlined. It features a regenerating shield on top of the player’s HP bar, and the player can only carry two weapons at a time (a change not everyone was fond of). The primary melee weapon is a “sky-hook,” which is not only to used to deliver melee attacks and finishers but also as a means of boosting mobility, as it allows the player to ride Columbia’s many “sky-lines,” popping in and out of combat at will.

On top of that, plasmids make a return in the form of “vigors,” which function more or less the same way. However, their effects are tweaked to reflect the changes to the combat system and are more suited to fast-paced shootouts, compared to the more strategic approach that one would have taken in the previous games. BioShock Infinite also adds a variety of equipable gear to the mix – hats, shirts, pants, and boots that provide passive bonuses.

Additionally, the game introduces a variety of new enemies. While Columbia’s police and military forces replace splicers as the main enemies, there are also a variety of heavy enemies that replace Big Daddies as the minibosses of the game, including the massive Handymen, the slow but mighty Motorized Patriots, and several others.

Overall, BioShock Infinite ended up being the most popular entry in the franchise, but whether it is the best of the bunch, only the player can decide. It received a two-part story, DLC titled Burial at Sea, which gave off a nostalgic Noir-style sendoff that revisited Rapture for the final time.

The game was initially released for the PS3, the Xbox 360, PC, and macOS, and was subsequently ported to the PS4, the Xbox One, and re-released on PC in 2016. A Linux port was also released before that in 2015. 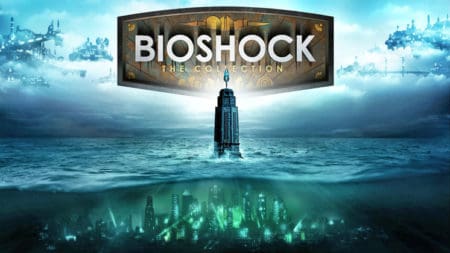 Though the franchise was immensely popular and influential, the developer (Irrational Games, now Ghost Story Games) had decided to move on following the release of BioShock Infinite’s DLCs. At the same time, the BioShock IP remains in the hands of 2K Games. The company had announced that a new BioShock was in the making back in 2014, though we are yet to hear anything concrete regarding a new entry in the series.

In any case, BioShock is definitely not done yet, for better or for worse. Even though the original team has moved on, it will be interesting to see how new developers will handle the franchise and whether the next game, whenever it comes, will be as remarkable as its predecessors. 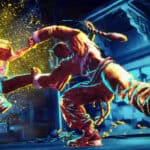