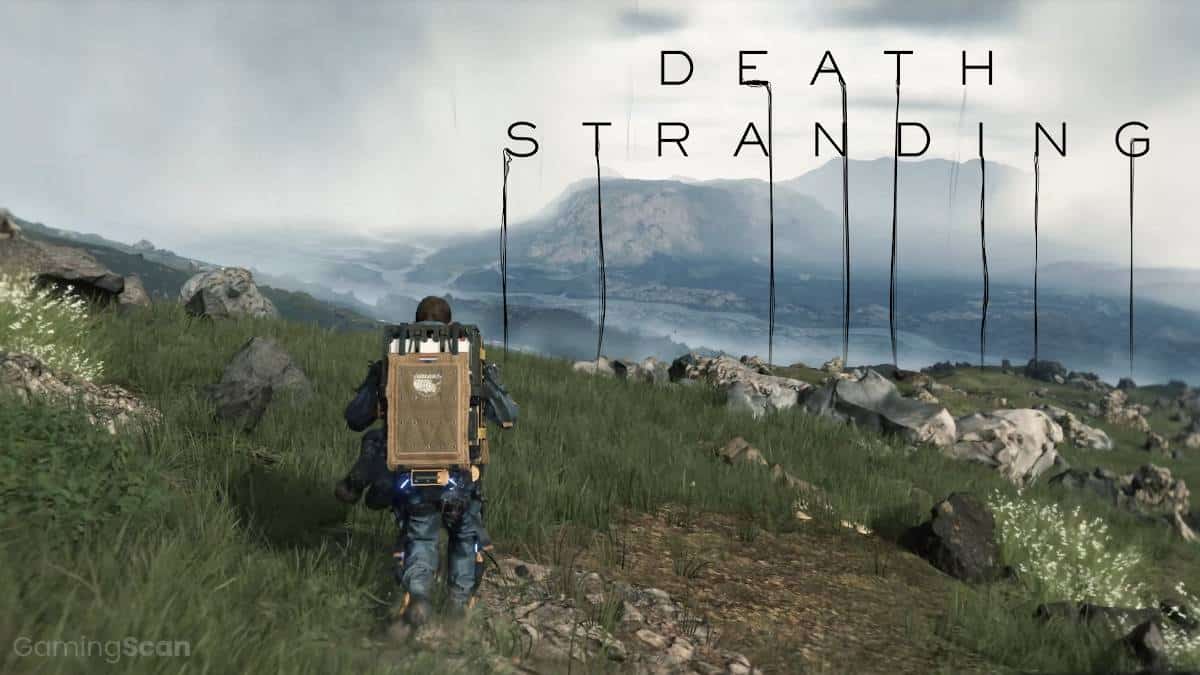 Death Stranding has been the subject of much hype over the past few years, and for a good reason. It was to be Kojima’s first game after his controversial split with Konami. Indeed, the game looked amazing from a technical standpoint and bizarre from every other perspective, but most importantly, it had a very distinct air of originality about it.

Fast forward to November 2019, and Death Stranding has stirred up quite a storm, but not in the right way. It has been pejoratively labeled as a “glorified walking simulator,” and it has been review-bombed on Metacritic since day one.

So, is Death Stranding really that bad, or is it actually better than what you might expect? Today, we’ll be reviewing what is likely the most polarizing game of 2019, so plug in your Bridge Babies, and let’s begin! 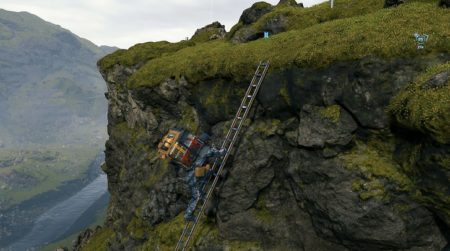 As mentioned in the intro, Death Stranding has been described by many as a “walking simulator.” This is a term that carries a negative connotation and is usually used to describe narrative-focused games that feature little to no actual mechanics, and the “gameplay” comes down to simply navigating the environment, hence the term. But in the case of Death Stranding, describing it as a walking simulator is both inaccurate and accurate.

Namely, the game does a great job of simulating actual movement, and controlling the protagonist, Sam, feels precisely how you would expect walking around with 100+ kilograms of stuff on your back to feel. Sam will struggle to keep his balance when carrying heavy cargo, sharp turns can throw him off-balance, he’ll gain and lose momentum in a realistic manner, he’ll trip when moving quickly over rough terrain, he’ll slip when climbing up or down steep slopes, he can be swept away by a river current, etc.

On top of that, Death Stranding features various gear that can help the player traverse the environment in a safer, faster, and more efficient manner. This includes simple ladders and climbing anchors, exoskeletons that can improve strength, speed, or balance, and floating carriers that allow the player to transport heavy cargo more efficiently, among other things.

Moreover, some vehicles further improve mobility, especially on easily traversable terrain. Then there are the PCCs, which allow the player to construct a variety of helpful structures that will appear not only on their own but also in other players’ games – and it works both ways.

The asynchronous multiplayer aspect of Death Stranding is similar to what we’ve previously seen in Dark Souls – players can leave various signs and hints to help out fellow porters, but there’s no way for two players to interact directly. Structures, gear, and dropped cargo will, however, appear in other players’ games, thus potentially making someone else’s game a bit easier.

If the player does their job right, they are awarded “likes.” NPCs will give away likes if certain delivery conditions are met, and players can award likes for any structure or vehicle that they find helpful. Accumulate enough likes, and Sam’s Porter Grade (level) will increase, providing various passive perks such as lower stamina consumption and better balance.

Now, of course, the world of Death Stranding isn’t quite the wasteland it appears to be at first glance, and the player will encounter enemies often. This includes both human enemies and BTs, i.e. “beached things,” which are the main supernatural threat in the game.

Human enemies come in two flavors – MULE and terrorists. There are some aesthetic differences between the two, but the only practical difference is that MULEs use non-lethal weapons and engage in melee combat while terrorists use lethal weapons. Both can be found patrolling large areas around their encampments, and both will attempt to engage the player and steal their cargo.

These enemies can be avoided altogether using stealth (which feels rather simplistic compared to the excellent stealth mechanics of Metal Gear Solid). Still, the player can also use a selection of lethal and non-lethal weapons that are unlocked throughout the game, all the while they can engage the enemies in melee, potentially using cargo containers as improvised weapons.

Sadly, encounters with human enemies feel rather underwhelming due to their simplistic AI, and since there is hardly any real punishment for failure, making them feel more like an obstacle than a real threat that should be avoided.

And then, there are BTs, which can either be avoided or dispatched using special hematic weapons that are unlocked later on in the game. All BT encounters are accompanied by persistent time fall, so the player is encouraged to move quickly if they don’t want their gear to deteriorate too much. The BTs are invisible unless the player is standing still, so navigating an area infested by them can be a bit of a challenge.

However, if the player is spotted and fails to escape a BT, they will be dragged into a boss fight, all the while potentially losing some of their gear along the way. Moreover, if the player is eaten by the BT boss, Sam’s death will trigger a voidout, and that particular area of the world will become an inaccessible crater.

But on a more underwhelming note, the boss fights are generally easy and running away is always an option. So, much like with the human enemies, BT segments quickly lose their appeal and any illusion of them being a real threat, which really takes away from the experience.

All in all, Death Stranding is an unusual game, and yes, most of it is just a post-apocalyptic hiking simulator where you’ll be delivering packages from point A to point B, though there is something oddly satisfying in navigating the terrain quickly and efficiently while making the most of what gear you have with you.

Enemy encounters can be a lot of fun at first but the combat system just feels unrefined and imbalanced, and both human enemies and BT bosses are disappointingly easy to defeat.

Add to that all the potential backtracking, and it’s easy to see why some would denounce Death Stranding as a tedious, repetitive chore. Still, there is some satisfaction and contemplative, melancholic beauty to be found here, but we feel that it is a game best played in short bursts. 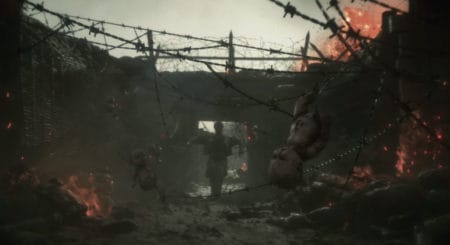 So, just how “Kojima” is the story of Death Stranding? The answer is: very.

The story is impossible to summarize or explain in short, but the overarching themes are readily apparent from the beginning of the game: isolation, loneliness, connection, and solidarity. The game depicts the state of human civilization in a world where the Earth itself has become a hostile place.

The phenomenon known as the Death Stranding has led to the worlds of the living and the dead overlapping, and the result are the supernatural phenomena that we see throughout the game: timefall (rain which accelerates the passage of time) and BTs. Besides that, you also have specters and otherworldly creatures from the world of the dead, which can cause devastating explosions known as voidouts by consuming living humans.

In this divided and disconnected world, Sam Porter Bridges – portrayed by Norman Reedus – must “reconnect” America by connecting the scattered cities and settlements onto the chiral network i.e., a new version of the internet powered by chiralium, a physics-defying crystal that has appeared on Earth as a result of the Death Stranding.

Now, as mentioned above, the story of Death Stranding is very distinctly “Kojima”, both from a thematic and presentation standpoint. The man isn’t known for his subtlety, so there are many weird moments and a lot of awkward ham-fisted exposition involved. It goes without saying that there are hours upon hours of cutscenes present in the game, but not all of them are as masterfully directed as some of the key moments that we’ve seen in the trailers.

The story is presented reasonably well and it is very original, to say the least, but many will undoubtedly feel that the pacing is thrown off by the actual gameplay. Moreover, for a game that is all about connections, there seems to be very little connection between the characters that comprise the main cast, and most of Sam’s interactions with other characters feel very one-sided – not to mention that all the minor characters are only ever seen as holograms. But at the end of the day, perhaps this was intentional on Kojima’s part.

All in all, the story of Death Stranding is definitely unique, bizarre, and thought-provoking, but it is bogged down by some lackluster writing, lack of proper character development, a high number of bland cutscenes that take place in the same old sterile environments, and some heavy-handed exposition that can feel very out of place at times.

All things considered – Death Stranding is a mixed bag. The initial backlash and review-bombing are simply the result of the game not living up to the impossibly high standard set by the hype that had been built up over the years, but even if we take that out of the equation, many aspects of Death Stranding just remain unimpressive.

Sure, there are many masterfully directed cutscenes, the narrative themes are very consistent, the story is filled with great ideas, the graphics are downright stunning, the motion capture is excellent, and the overall experience is definitely memorable. More importantly, the game gets a very important and admirable message across, which sadly remains overshadowed by its shortcomings.

Death Stranding seems to be defined by great ideas and flimsy execution, both from a gameplay and from a narrative standpoint. The gameplay, even the combat, can quickly devolve into a chore, some of the characters could have been written and presented better, all the while the cinematics and character interaction really should have taken place in some more diverse environments. 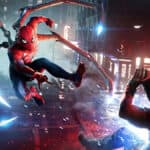