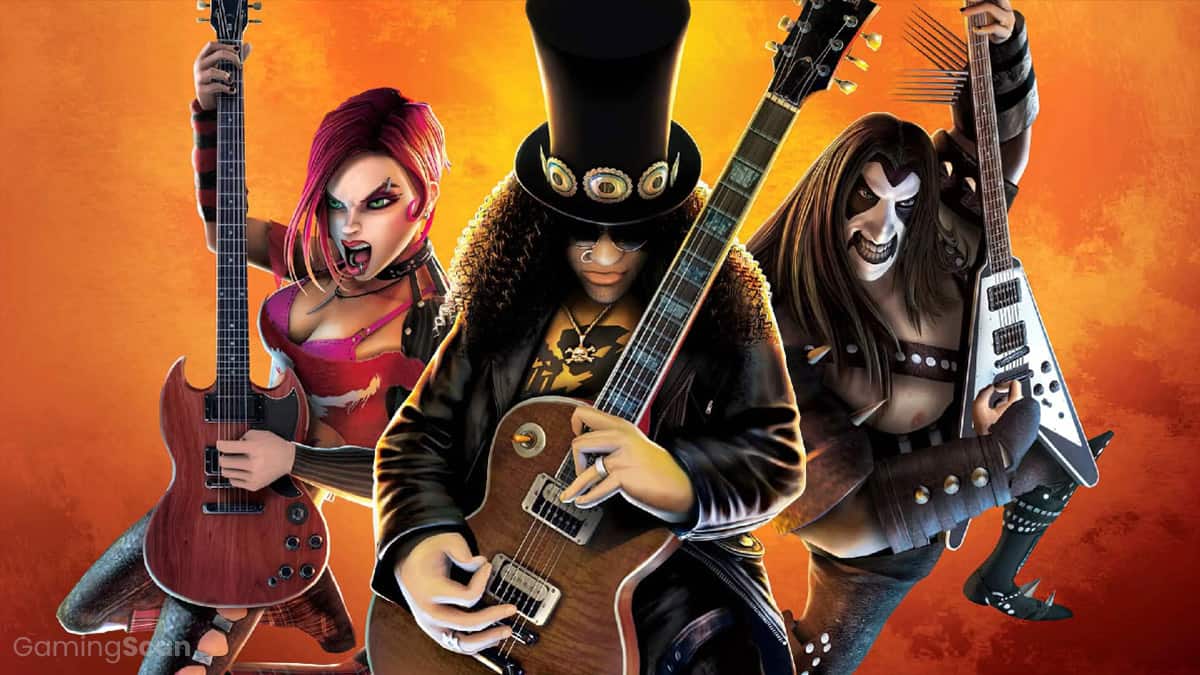 Debuting in the mid-2000s, Guitar Hero rose to rhythm fame rather quickly before plateauing and eventually disappearing altogether.

Like many beloved video game franchises, the series still has a passionate following of fans who would love to see Guitar Hero make a comeback in 2023.

Along the way, we’ll discuss how the franchise has evolved as well as the critical reception surrounding each game in the series. 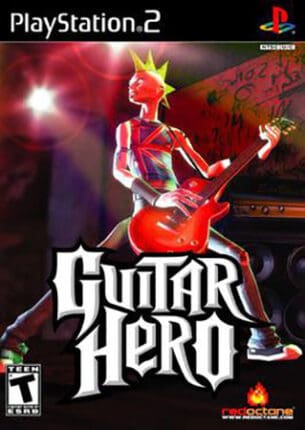 Developed by Harmonix and published by RedOctane, the original Guitar Hero was released in 2005 as a PlayStation-exclusive rhythm game in the same vein as Konami’s Guitar Freaks series.

The game’s main selling point was its inclusion of a guitar-shaped controller that would simulate playing rock music by pressing buttons in time with on-screen music notes.

Guitar Hero features covers of 30 popular rock songs spanning five decades of rock, from the 1960s through to 2005, with additional bonus tracks included.

Upon release, the game became a surprise hit, earning critical acclaim, several awards, and over $2 billion in sales. 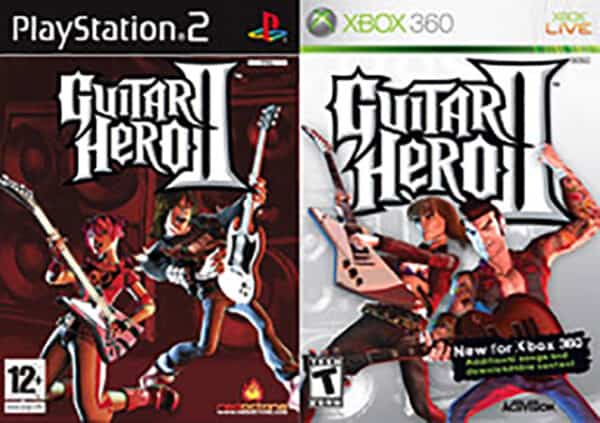 Released just a year later, Guitar Hero II sought to capitalize on the success of the first game with a slew of new tracks.

This includes 40 licensed songs, many of which are cover versions of popular rock songs released during the 1960s to 2000s.

The gameplay remains largely the same but expands with new modes and note combinations for an added challenge.

Much like its predecessor, Guitar Hero II was met with critical acclaim, particularly for its new multiplayer and practice modes. 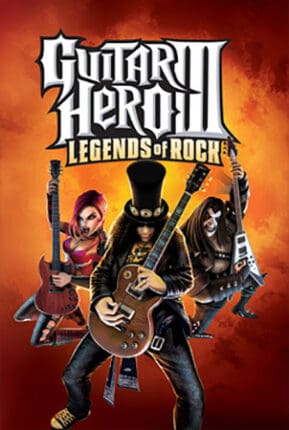 Having acquired the rights to the series, Activision contracted Neversoft to produce a new Guitar Hero game, Guitar Hero III: Legends of Rock.

The game launched with over 70 songs, a new Co-op Career mode, and competitive challenges that pit the player against iconic musicians and other players.

To this point, Legends of Rock is the first Guitar Hero game to support online multiplayer across console versions.

Despite scoring lower than previous games in the series, Guitar Hero III was generally well-received by both critics and fans. 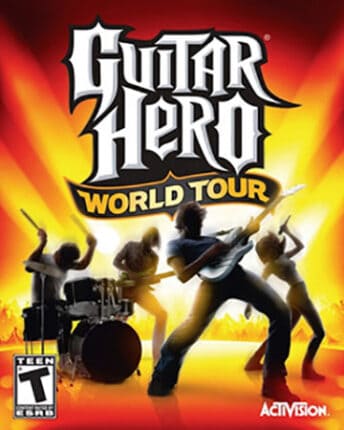 Next up on our list of Guitar Hero games in order is none other than Guitar Hero World Tour, the fourth main series installment in the franchise.

Expanding on the formula, this is the first game to feature both drum and microphone peripherals on top of the existing guitar controller.

In addition, World Tour introduces the ability to create new songs using Music Studio mode and share them with other players online.

The quality of the instrument controllers, customization options, and overall difficulty compared to previous entries resulted in generally favorable reviews. 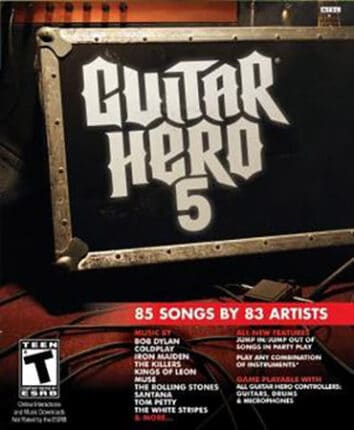 In an attempt to compete with games like Rock Band, Guitar Hero 5 leaned even further into the multiplayer band experience with a total of four instrument controllers.

This includes lead and bass guitars, drums, and a microphone for vocals that could be mixed and matched during drop-in/drop-out multiplayer.

New competitive challenges such as Rockfest were added, allowing players to face off against each other as well as iconic performers across 85 songs by 83 separate artists.

Following its release, Guitar Hero 5 received favorable reviews, particularly for its accessibility and multiplayer options, but ultimately sold less than half as many copies as World Tour. 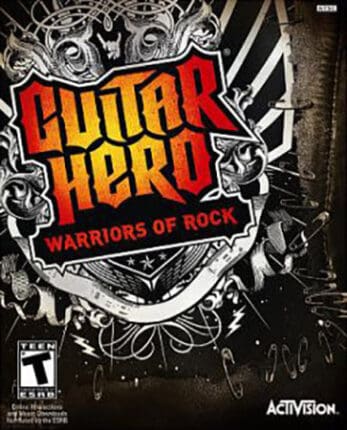 Continuing with our list of Guitar Hero games in order, Warriors of Rock is the sixth entry and the first to include a story mode in which the player recruits 8 musicians to defeat a villain known as “The Beast.”

Several tracks were incorporated into this storyline, including Rush’s seven-part “2112,” and “Sudden Death” by Megadeth off of their upcoming album TH1RT3EN.

On the gameplay side of things, Warriors of Rock maintains the series’ core mechanics and multiplayer functionality while adding new bonus challenges and power-ups.

Unfortunately, the game was not as well-received as its predecessors, with mixed to positive reviews citing a noticeably weaker soundtrack consisting of lesser-known songs and artists. 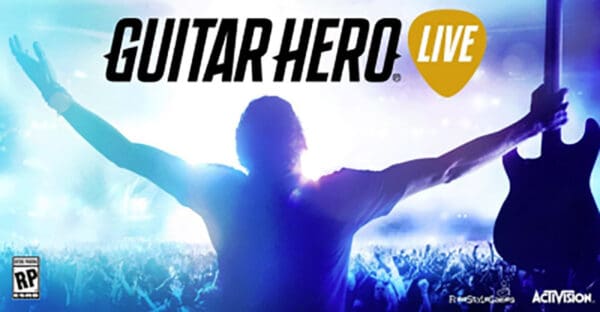 The seventh and most recent game in the series, Guitar Hero Live was an attempt at rebooting the franchise for a new generation of video game consoles.

As such, it was developed by a new studio, FreeStyleGames, and includes boasts several innovations to its guitar control scheme along with two new modes: GH Live and GHTV.

The first serves as Live’s career mode with 42 songs included while the latter leverages an online library of 200 tracks updated weekly that could be purchased using in-game credits or real money.

Critics and fans’ reaction to Guitar Hero Live was mostly positive, as many enjoyed the new controller design and wider selection of content but took issue with its reliance on microtransactions. 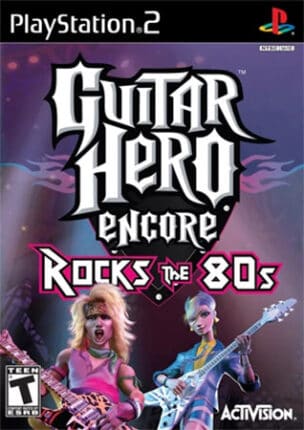 No list of Guitar Hero games in order would be complete without mentioning the various handheld and console spin-offs that have been released throughout the years.

This includes Guitar Hero Encore: Rock the 80s, which was released shortly after Guitar Hero II and focuses primarily on 1980s music.

To this point, the game’s soundtrack, playable characters, fashion, and artwork are designed to emulate popular trends and artists at the time.

It was also the third and final title in the series to be developed by Harmonix and wasn’t very well-received due to a lack of new features and a limited soundtrack. 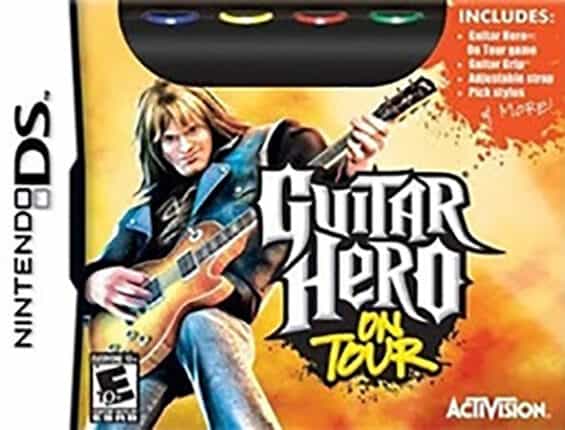 Released exclusively for the Nintendo DS, Guitar Hero: On Tour is the first portable handheld game in the rhythm game series.

To mirror the traditional Guitar Hero experience, it includes a four-button Guitar Grip attachment that works in tandem with the DS stylus to register and strum notes.

The game’s soundtrack consists of 26 songs—twenty-one exclusive to On Tour and five pulled from Guitar Hero III: Legends of Rock.

On Tour received mixed to positive reviews and is generally regarded as an ambitious project that didn’t quite fulfill its promise of recreating the Guitar Hero experience on a handheld. 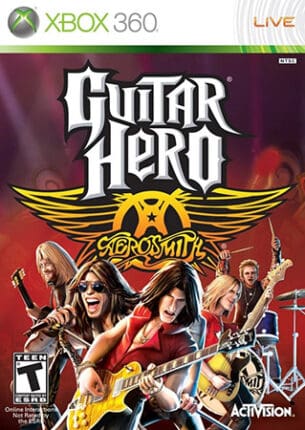 Considered an expansion to Guitar Hero III, Guitar Hero: Aerosmith is the first game in the series to be developed by Vicarious Visions as well as the first to narrow its focus to just a single band.

To this point, 70% of the game’s soundtrack consists of Aerosmith songs while the remaining tracks are from bands that either draw influence or have opened for them.

The single-player Career mode has the player going through the band’s history and performing in several venues based on real-world locations.

Despite featuring identical gameplay to its predecessors, Guitar Hero: Aerosmith was panned for being far shorter and easier than previous Guitar Hero games. 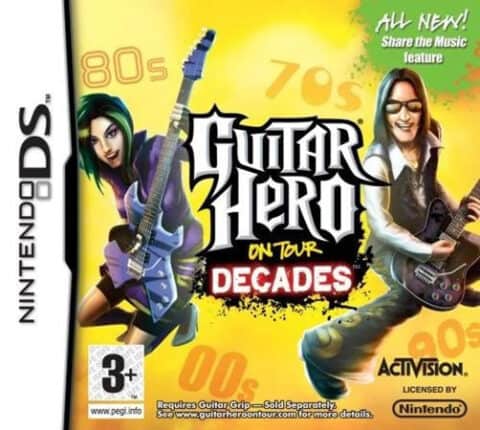 Guitar Hero: On Tour was followed up by a sequel, On Tour: Decades, another handheld exclusive that utilizes the Guitar Grip attachment.

As its title suggests, the game takes a chronological approach in divvying up its soundtrack, with five songs offered for each decade of rock n’ roll history.

This is further complemented by a host of new venues, master tracks, and characters not present in the original On Tour.

While the game’s expanded offerings were well-received by fans, critics were not as impressed, leading to mixed or average reviews. 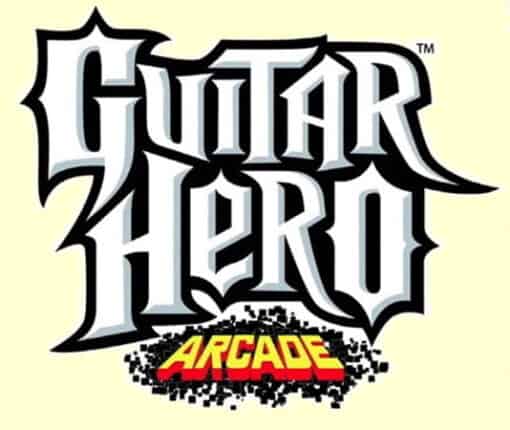 Having partnered several times in the past, Activision and Konami teamed up to distribute Guitar Hero Arcade in early 2009.

Following its release, the game was scrutinized by the American Society of Composers, Authors, and Publishers, who claimed it qualified as a “public performance” worthy of further compensation. 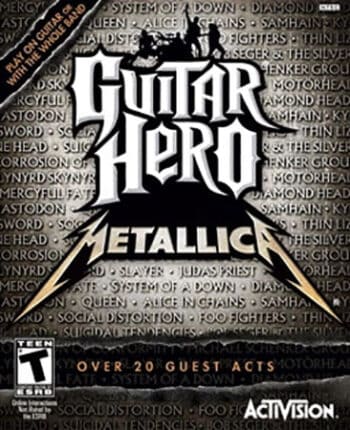 Similar to Guitar Hero: Aerosmith, Guitar Hero: Metallica narrows its focus to a single subject, in this case, the heavy metal band Metallica.

Retaining the design of Guitar Hero World Tour, it features support for lead and bass guitars, drums, and microphone controllers.

The soundtrack consists of 28 master tracks from throughout Metallica’s career along with 21 additional songs hand-picked by the band’s members.

In the end, Guitar Hero: Metallica received positive reviews, with critics viewing it as a worthy tribute to the band and one of Neversoft’s best efforts with the series to date. 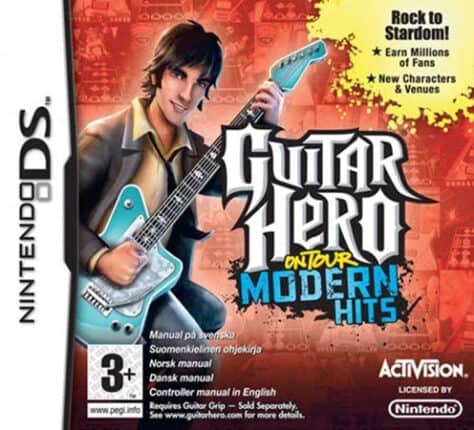 Operating in contrast to On Tour: Decades, Guitar Hero On Tour: Modern Hits focuses entirely on songs published within the last five years of its release.

This required a great deal of effort on the part of developer Vicarious Visions to balance the song selection and maintain a wide appeal.

Additionally, the game’s new single-player Career mode uses “Fan Requests” to create a non-linear progression in which the player must complete a certain number of songs before advancing.

Little else was changed regarding gameplay and overall structure, resulting in a mixed reception from fans and critics. 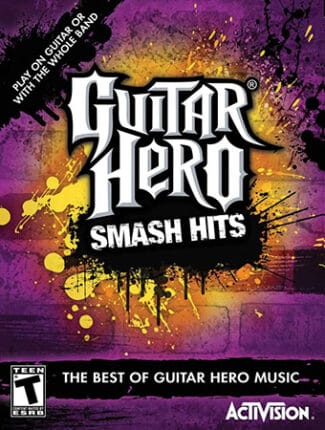 Functioning as a “Greatest Hits” of Guitar Hero games in order, Smash Hits features 48 songs from five previous games in the series.

Each song is redesigned based on master recordings and includes support for full band play using the four musical instrument controllers.

Although Smash Hits received moderate praise, this was somewhat undercut by critics citing the game’s mere existence as an indicator of just how oversaturated the music game market had become. 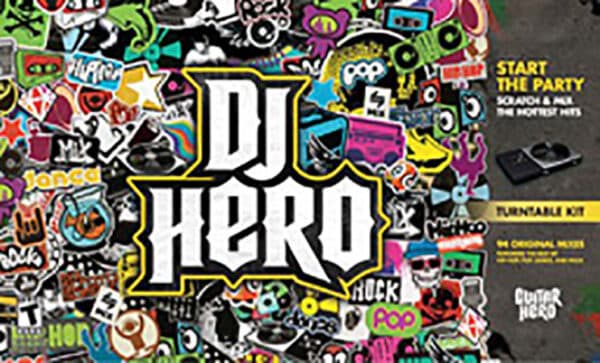 Taking its cues from turntablism, DJ Hero is a Guitar Hero spin-off that came bundled with a physical turntable peripheral.

This allows players to remix over 100 included tracks across various genres and prominent figures such as DJ AM, Grandmaster Flash, DJ Jazzy Jeff, and Daft Punk.

Much like traditional Guitar Hero, the player must press buttons in time with the track with the addition of crossfading and scratching mechanics used to score more points.

At the time of its release, DJ Hero was generally well-received by critics praising the departure from standard Guitar Hero gameplay. 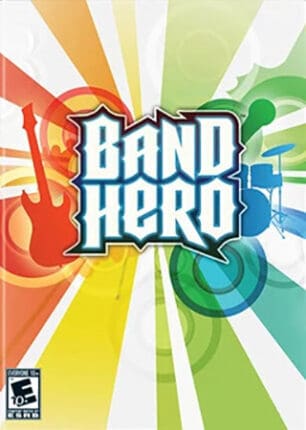 The next stop on our Guitar Hero games in order world tour is Band Hero, another spin-off that designates separate peripherals depending on the version.

On consoles, Band Hero features full support for each instrument controller as well as drop-in/drop-out multiplayer.

However, on handheld, players are limited to using the Guitar Grip or new Drum Skin that comes included with the game. 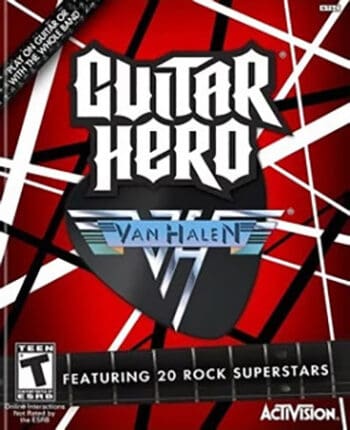 The final Guitar Hero spin-off to grace players’ homes, Guitar Hero: Van Halen was developed by Underground Development and published by Activision in the late 2000s.

Similar to spin-offs that came before, it focuses on the career and songs of one American rock band, Van Halen.

It features 25 songs performed by the band along with 19 curated tracks from artists directly inspired by the group.

Following its release, Guitar Hero: Van Halen received mixed reviews for its lack of features, limited tracklist, and promotion as a free bonus for anyone who purchased Guitar Hero 5.