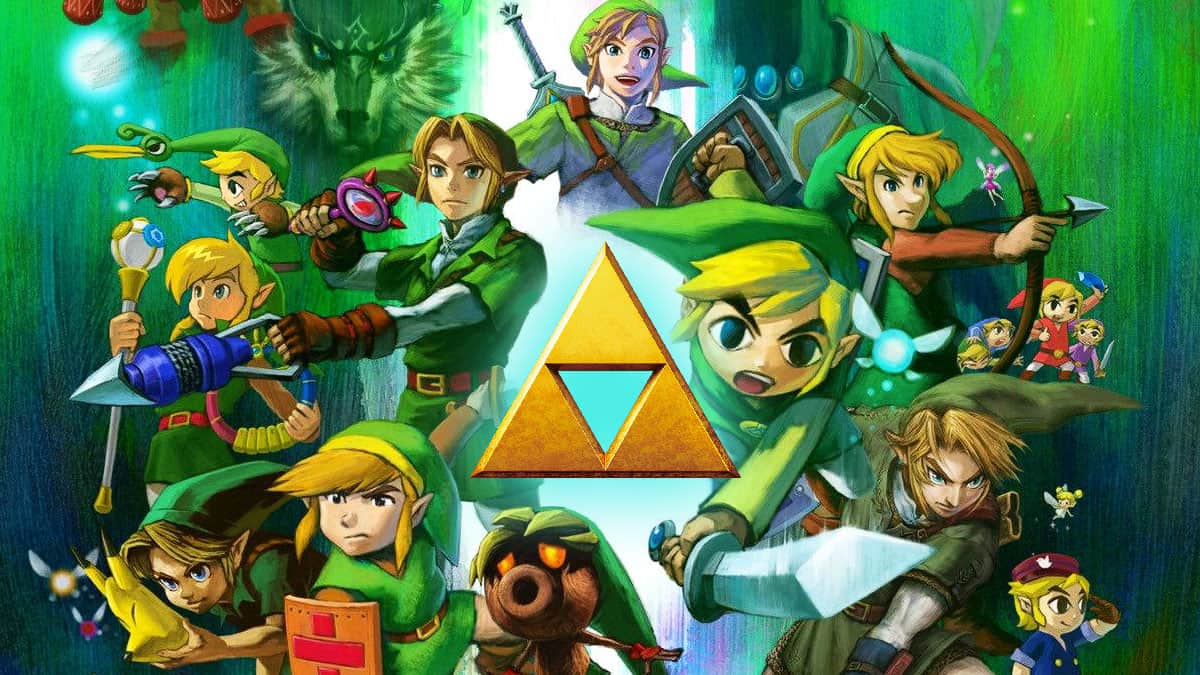 The Legend of Zelda is one of Nintendo’s most successful franchises, with many of its entries ranking among the best video games ever made.

Conceived by Shigeru Miyamoto and Takashi Tezuka, the series traces back to 1986 with the original The Legend of Zelda for the Famicom and NES.

Since then, Zelda has maintained a consistent release cycle that covers every generation of Nintendo consoles and handhelds.

In this list, we’ll make sense of the Zelda timeline by listing all of The Legend of Zelda games in order of release.

This includes strictly mainline Zelda console and handheld games in the order they were released, and not any Zelda spin-offs. 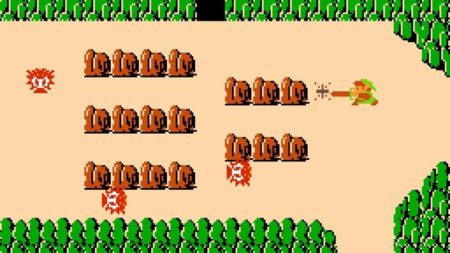 Released in Japan in 1986 for the Famicom, The Legend of Zelda introduced all of the core elements we’ve come to expect from a Zelda title.

This includes the first appearance of the series’ three main characters as well as the Triforce and Hyrule.

Played from a 2D overhead perspective and with a strong focus on exploration, the game sees players controlling a young hero named Link.

Link is tasked with saving Princess Zelda and the kingdom of Hyrule from the Prince of Darkness, who would later be known as Ganon. 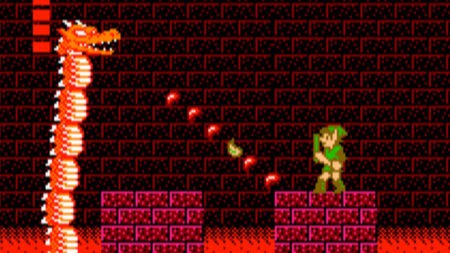 Zelda II: The Adventure of Link

Nintendo decided to take things in a different direction with Zelda II: The Adventure of Link by introducing a side-scrolling perspective.

The game is a lot more action-oriented than the first and features RPG elements not found in later games.

Among these is a leveling-up system that allows Link to use experience points to upgrade his abilities, which includes casting spells.

Considering Nintendo never released another Zelda game in this style, The Adventure of Link is often regarded as the black sheep of the series. 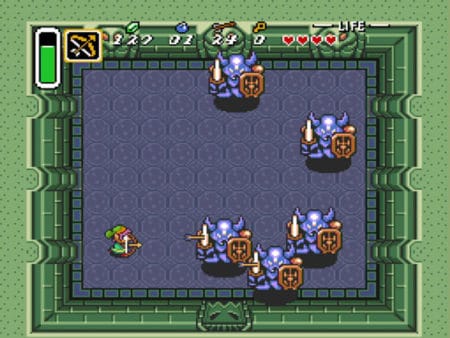 The Legend of Zelda: A Link to the Past

Making its debut on the SNES, A Link to the Past is a prequel to the first two entries that revisits the original formula.

Its design mirrors that of other Nintendo first-party sequels at the time as it improves upon the NES classic by taking advantage of the SNES hardware.

As a result, many of the mechanics from the first game were refined or changed, such as Link’s arrows being listed as separate items.

A Link to the Past also introduced the idea of multiple dimensions in the Zelda universe, making it partially responsible for the messiness of the series’ timeline. 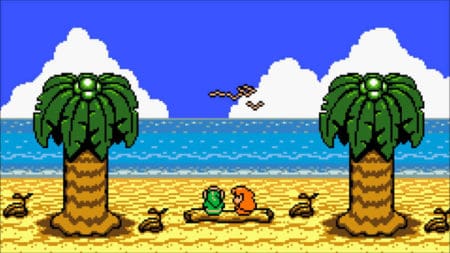 Link’s Awakening is the first entry in the series to release on a handheld and one of the few Zelda games to not reference Hyrule, Princess Zelda, or the Triforce.

The game takes place after the events of A Link to the Past and sees Link traveling by boat when a terrible storm leaves him shipwrecked on Koholint Island.

In order to leave, Link must wake the island’s guardian by collecting 8 “Instruments of the Sirens.” from various dungeons. 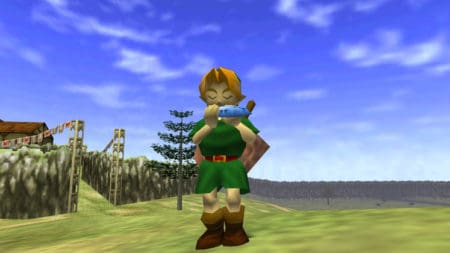 The Legend of Zelda: Ocarina of Time

The switch from 2D to 3D graphics meant a lengthy gap between the release of Link’s Awakening and Ocarina of Time.

Considered ambitious for its time, the game introduces a host of new features that would become staples of 3D Zelda games.

This includes lock-on “Z-targeting” and the appearance of Link’s horse Epona to quickly travel around the world.

The game was later ported to the GameCube as part of The Legend of Zelda: Collector’s Edition and enhanced for the Nintendo 3DS as Ocarina of Time 3D. 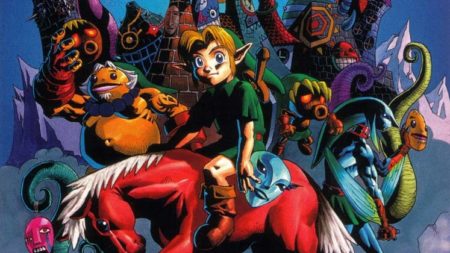 The Legend of Zelda: Majora’s Mask

Much like the conversion from the original Legend of Zelda to Zelda II, Majora’s Mask is a direct sequel to Ocarina of Time that changes up the formula.

Here, Link is forced to re-live the same three days over and over again to prevent a giant falling moon from destroying the land.

The game has a much smaller scope than Ocarina of Time and has been recognized for its darker themes and more mature undertones compared to other entries.

Majora’s Mask was also included in The Legend of Zelda: Collector’s Edition for the GameCube and enhanced for the Nintendo 3DS as Majora’s Mask 3D. 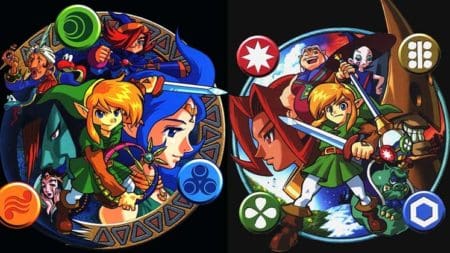 The Legend of Zelda: Oracle of Seasons and Oracle of Ages

Initially planned as a trilogy, the project was downsized to just two at Miyamoto’s suggestion following difficulties with the password system that linked all three.

As such, Oracle of Ages primarily focuses on puzzle-based gameplay whereas Oracle of Seasons is more action-driven. 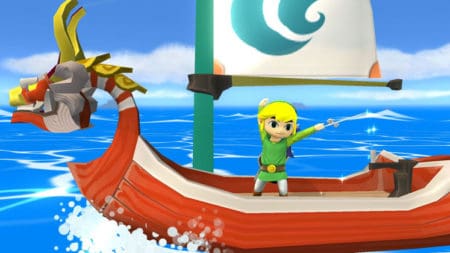 The Legend of Zelda: The Wind Waker

Released for the GameCube, The Legend of Zelda: The Wind Waker features a unique cel-shaded art style that sets it apart from previous games in the series.

The shift in visuals further complemented the game’s world design, which sees the kingdom of Hyrule buried at the bottom of the Great Sea.

A majority of time is spent sailing between islands on Link’s boat, the King of Red Lions, using a magical tool called the Wind Waker to control the wind’s direction.

Although its cartoony visuals were divisive among fans and critics, The Wind Waker is regarded as one of the best entries in the series.

Nintendo would later release an enhanced port, The Legend of Zelda: The Wind Waker HD, for the Wii U in September 2013. 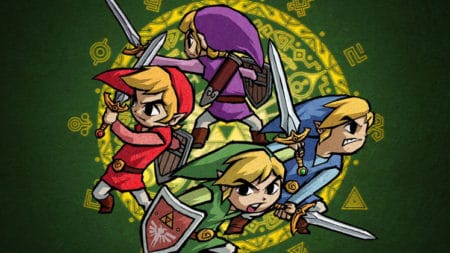 2004 would see the release of an expanded version of Four Swords, which debuted in the GBA port of A Link to the Past.

Four Swords Adventure maintains many of the mechanics of its GBA incarnation while taking advantage of the hardware capabilities of the GameCube.

The former was titled “Hyrulean Adventure” and sees Link restoring peace to the Hyrule Kingdom after an evil doppelganger called Shadow Link is created. 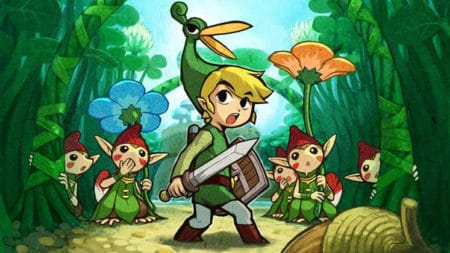 The Legend of Zelda: The Minish Cap

Whereas many Zelda games tend to focus on offering players a massive world to explore, The Minish Cap sets out to achieve the exact opposite.

Released in 2004, the GBA title sees Link partnering with a magical talking hat named Ezlo, who has the power to turn Link into a miniature version of himself.

After shrinking down in size, Link can explore a tiny world hidden within the Hyrule kingdom.

This mechanic is exclusive to The Minish Cap and has not been incorporated in any games since. 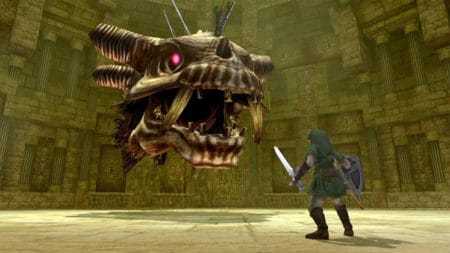 The Legend of Zelda: Twilight Princess

In contrast with The Wind Waker’s bright and bold visuals, Twilight Princess takes Link’s next adventure in a much visually darker direction.

The story follows Link as he obtains the ability to turn into a wolf via a mysterious creature named Midna who acts as a guide throughout his adventure.

Twilight Princess revisits the concept of multiple dimensions within the Zelda universe by introducing a parallel world called the Twilight Realm.

While the Wii version was criticized for its reliance on motion controls, the GameCube version was praised for offering a more conventional Zelda experience. 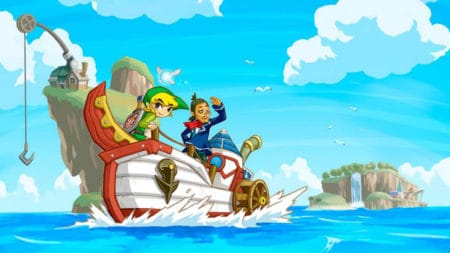 The Legend of Zelda: Phantom Hourglass

Nintendo would soon revisit The Wind Waker’s cel-shaded visuals with a direct sequel for the Nintendo DS.

Released in 2007, Phantom Hourglass returned to the top-down perspective of the original Zelda while introducing a new control scheme.

This allowed players to create a path for Link’s boat using both the handheld’s stylus and touchscreen.

The game’s story is a continuation of The Wind Waker and sees Link on a quest to save his friend Tetra with help from Captain Linebeck and his ship. 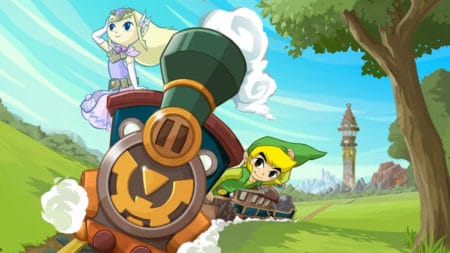 The Legend of Zelda: Spirit Tracks

In it, magical railways called spirit tracks that are responsible for imprisoning ancient evils have begun to disappear throughout Hyrule.

Instead of a boat, Link is tasked with using a train to restore the tracks and defeat the Demon King with assistance from Princess Zelda herself. 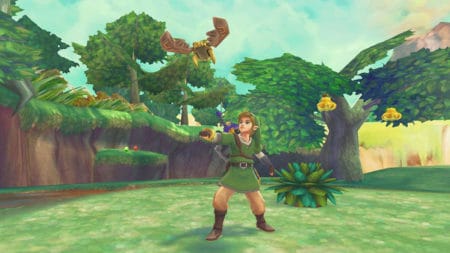 The Legend of Zelda: Skyward Sword

Nintendo would fully commit to supporting motion controls for the next Zelda title with The Legend of Zelda: Skyward Sword.

To minimize any criticisms tied to its control scheme, the game was released alongside the Wii MotionPlus, an improved Wii remote that offered greater accuracy.

This did little to mitigate the issue as Skyward Sword was still ultimately panned for its motion control implementation along with other design aspects.

Thankfully, Nintendo used this as a learning opportunity to rethink its design principles for future Zelda games.

Skyward Sword was later rereleased on the Wii U eShop and remastered in July 2021 for the Nintendo Switch as The Legend of Zelda: Skyward Sword HD. 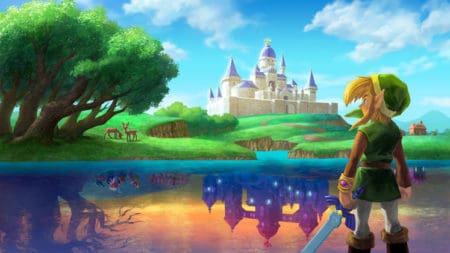 The Legend of Zelda: A Link Between Worlds

A Link Between Worlds is considered a spiritual successor to A Link to the Past two decades after the original’s release for SNES.

The game takes place in the same location as A Link to the Past but is set much further in the future.

It introduces a new mechanic that sees Link turning into a two-dimensional painting capable of sliding along walls.

This mechanic led to more inventive puzzle designs while offering players a new way to sneak past enemies. 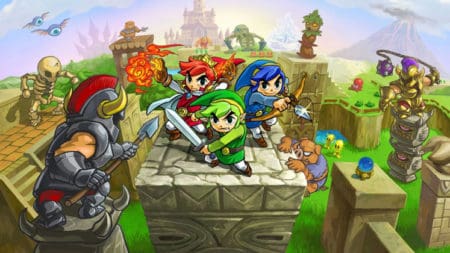 In it, up to three players can work together to conquer dungeons while solving puzzles and battling enemies.

These went beyond just changing his visual appearance, granting Link new special abilities that would come in handy throughout each dungeon. 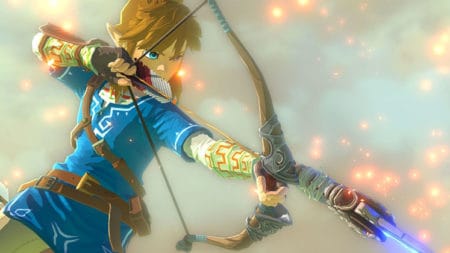 Launching alongside the Switch and going on to sell more copies than the console itself, Breath of the Wild is considered one of the best entries in the series.

The option to play on handheld combined with the game’s old-school Zelda feel were the only excuses players needed to pick up BOTW.

However, some new mechanics such as cooking and weapon durability are welcome additions that provide an extra layer of challenge and strategy.

Lastly, BOTW features the largest, most detailed world of any other game in the series, with tons of hidden secrets and locations to discover. 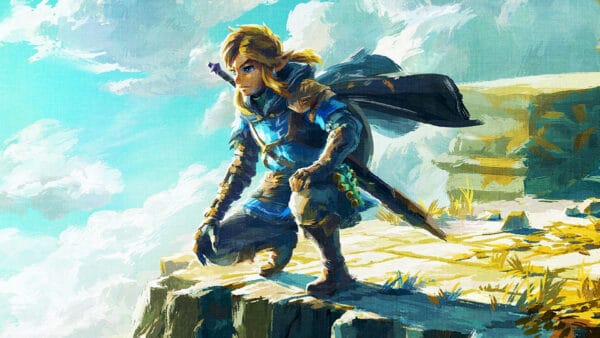 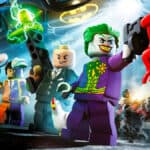