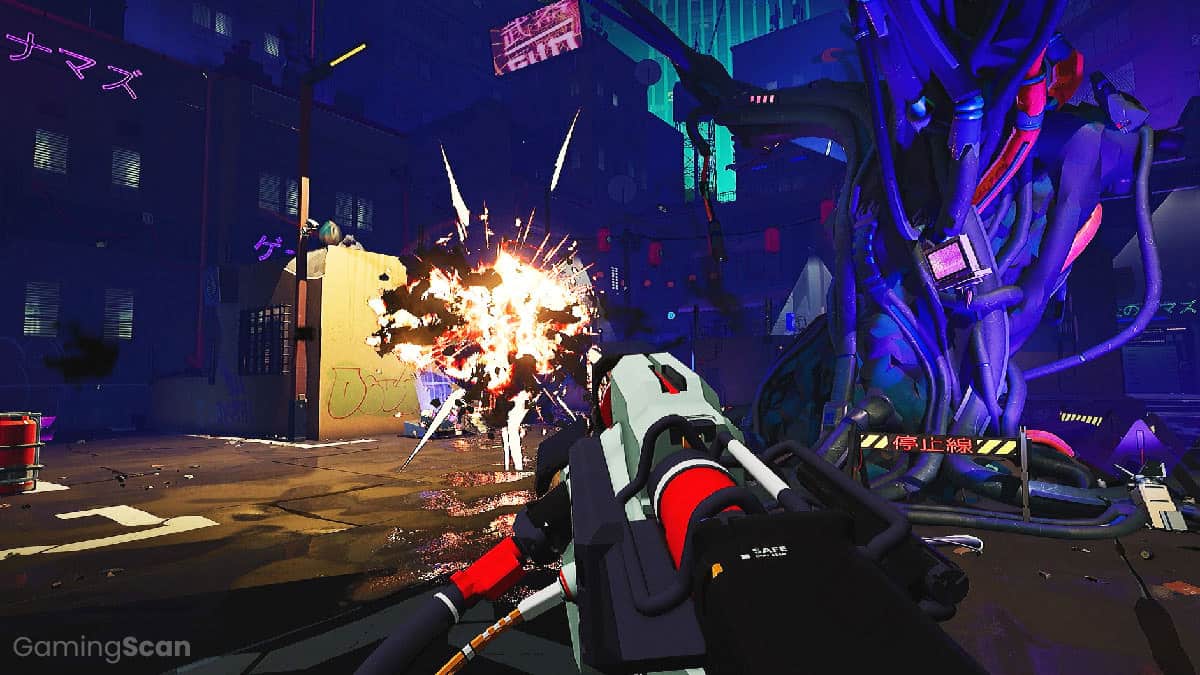 As one of the oldest video game subgenres, arena shooters really came into their own during the 1990s and remain quite popular to this day.

Over the years, they’ve continued to evolve as features like fully 3D graphics and competitive online multiplayer became more viable.

To give you an accurate overview of what the genre has to offer in 2022, here we’re highlighting the best arena shooter games on PC and consoles.

This includes first-person shooters as well as top-down shooters set in arena-like environments with roguelike elements.

With that all out of the way, let’s dive right into our suggestions!

To get started, we’re shining a light on Deadlink, a cyberpunk-themed arena shooter with first-person combat and roguelike progression.

In it, you play as a special agent tasked with carrying out covert ops against shady megacorps via an autonomous combat shell.

As you progress, you’ll have opportunities to upgrade your skills and tech as well as outfit your shell with powerful loadout combinations.

Hyper Demon is a new first-person arena shooter that comes courtesy of Sorath, the same developer behind Devil Daggers.

Building off of its predecessor, the game sees you entering a surreal dreamscape where you’ll face off against otherworldly foes by firing projectiles from your fingertips.

Unlike most FPS games, Hyper Demon implements an innovative spherical perspective that provides up to 180 degrees field of view.

This works in conjunction with a rearview overlay to achieve full 360-degree sensory awareness, something that comes in handy during chaotic combat encounters.

Inspired by classic arena shooters, Fashion Police Squad is a humorous and over-the-top single-player FPS by Mopeful Games and No More Robots.

In it, you play as an officer of the titular Fashion Police Squad, a unit dedicated to fighting against fashion crime using attire-enhancing weaponry.

From saggy pants to excessive neon bright colors, socks with sandals, and every fashion faux pas in between, you’ll deliver swift justice across the city.

Much of the game’s humor is referential and further complemented by a unique blend of 2D pixel sprites and 3D environments.

Set in a cyberpunk world overflowing with neon, the game casts you as a half-metal half-human bounty hunter named Johnny Turbo.

Taking to the streets, you’ll get into fast-paced firefights with hordes of enemies using a robust arsenal of death-dealing tools.

This includes the usual fare of shotguns, machine guns, and rifles along with deadly augmented body parts such as hidden arm rockets and a leg-fastened chainsaw.

Next up is Rollerdrome, a third-person arena shooter with a heavily stylized, cel-shaded visual style created by Roll7, best known for the OlliOlli skateboarding series.

In this game, you assume control of Kara Hassan as she participates in a deadly sport dubbed “rollerdrome,” in which contestants perform roller-skating tricks while fighting enemies.

Each trick performed nets you more ammo for your guns and defeating enemies drops health pick-ups to keep Kara in the fight.

As you progress through the story, more powerful weapons like grenade launchers and shotguns are introduced as well as more challenging threats such as snipers.

Taking on the role of deadly little bean men, you’ll mow down enemies across guarded facilities, cult camps, moving trains, and other environments.

Armed with an assortment of pistols, rifles, shotguns, machine guns, and melee weapons with unique perks, you’ll learn to hone your skills throughout the game’s 8-hour campaign.

After that, you’re welcome to replay the story with a friend via local co-op or move over to a dedicated arena mode that introduces character customization and skill tree progression.

Serving as the latest iteration of the iconic arena shooter, Quake Champions sees you entering the fray to compete against players from around the world.

In order to prove yourself, you’ll face off against the best of the best in fast-paced shootouts with a devastating arsenal of weaponry.

Where Quake Champions sets itself apart is its diverse roster featuring various “Champions,” with unique attributes and abilities for you to master.

This is all while combining the dark mythos of the original Quake with the skill-based competition of Quake III Arena in one modern arena shooter package.

Switching gears for a sec, Brotato is a top-down arena shooter with hand-drawn visuals and roguelite elements that see you making steady progress.

If it wasn’t obvious enough already, you play as a murderous potato caught in a never-ending battle with alien invaders.

Such a dangerous threat calls for drastic measures, including the ability to wield up to six weapons during tense battles.

There are other traits and items to unlock and explore on your journey to discovering the most potent potato build for surviving the invasion.

Taking its cues from games like Vampire Survivors as well as Path of Exile, it has you choosing a character to exterminate hordes of demons using magical attacks.

Each character has unique stat boosts that factor into their active spells and passive auras to help define your build and playstyle.

Over time, you’re able to upgrade various stats to increase your damage, rate of fire, etc. to keep up with more challenging enemy variants.

Bounty of One puts a Wild West spin on the arena shooter genre by casting you as a disgraced cowboy on a mission to clear his name.

Standing in his way is an army of bounty hunters looking to cash in on the reward for his head.

To keep him alive, you’ll have to dash, dodge, and shoot your way around the wasteland as enemies pour in all around you.

Eventually, you’ll upgrade your skills to tip the scales in your favor but the game also lets you improve your chances by bringing along some gun-slinging friends.

Without a doubt one of the best free-to-play arena shooters, Splitgate puts a unique portal-placing twist on fast-paced FPS combat.

In it, players engage in high-octane firefights in sprawling locations that allow for a wide range of tactical possibilities by connecting portals.

Doing so reveals new vantage points you can use to catch enemies off guard as well as provides a quick escape should things get too heated.

Since its release, Splitgate has improved considerably thanks to seasonal content drops, challenges, leaderboards, and game modes.

Following in the footsteps of games like Quake, Warfork is another great free PC game with fast-paced FPS combat that comes from developer Team Forbidden.

Like other games in the arena shooter space, a significant focus is placed on speed, aim, movement, and competitive play, especially at higher levels.

This makes it an excellent choice for seasoned FPS players looking to challenge themselves with a new multiplayer arena shooter.

The best part is Warfork doesn’t include any annoying gimmicks such as having to level up characters or purchase more powerful weapons using real-world money.

Coming from the mind of Arsi “Hakita” Patala as well as published by New Blood Interactive, Ultrakill is one of several modern FPS games modeled after classics like Doom and Quake.

To this point, the game sells itself as a tough-as-nails arena shooter with deliciously old-school graphics and satisfyingly difficult combat.

In it, you play as a robot machine fueled by blood that descends into the depths of hell to defeat the dead, demons, and other machines for consumption.

This ties in perfectly with Ultrakill’s risk-versus-reward-oriented gameplay loop, with both mobility and aggression taking center stage.

Of course, this list wouldn’t be complete without mentioning at least one entry from the DOOM series considering it help pioneered the arena shooter genre.

Maintaining the franchise’s zest for gratuitous violence and over-the-top weaponry, DOOM Eternal presents you with a host of new demonic threats to conquer.

To aid you in your quest, the game introduces a new grappling hook tool that allows you to get around environments more easily.

Levels are designed with this in mind, resulting in massive jungle gym-like arenas where players can methodically work their way through the enemy’s ranks.

Last but not least, we’ve chosen to include the grungy old-school-inspired arena shooter DUSK, made by David Szymanski and also published by New Blood Interactive.

In this game, you find yourself transported to a demonic world inhabited by otherworldly threats that cover everything from evil cultists to possessed mercenaries.

To keep alive, you’ll have to move at breakneck speeds while wielding an assortment of shotguns, crossbows, rocket launchers, and other powerful weapons.

In addition to a challenging single-player campaign, DUSK features alternate Endless Survival and Arena Multiplayer modes that will put your skills to the ultimate test. 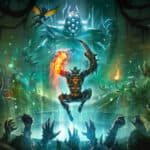