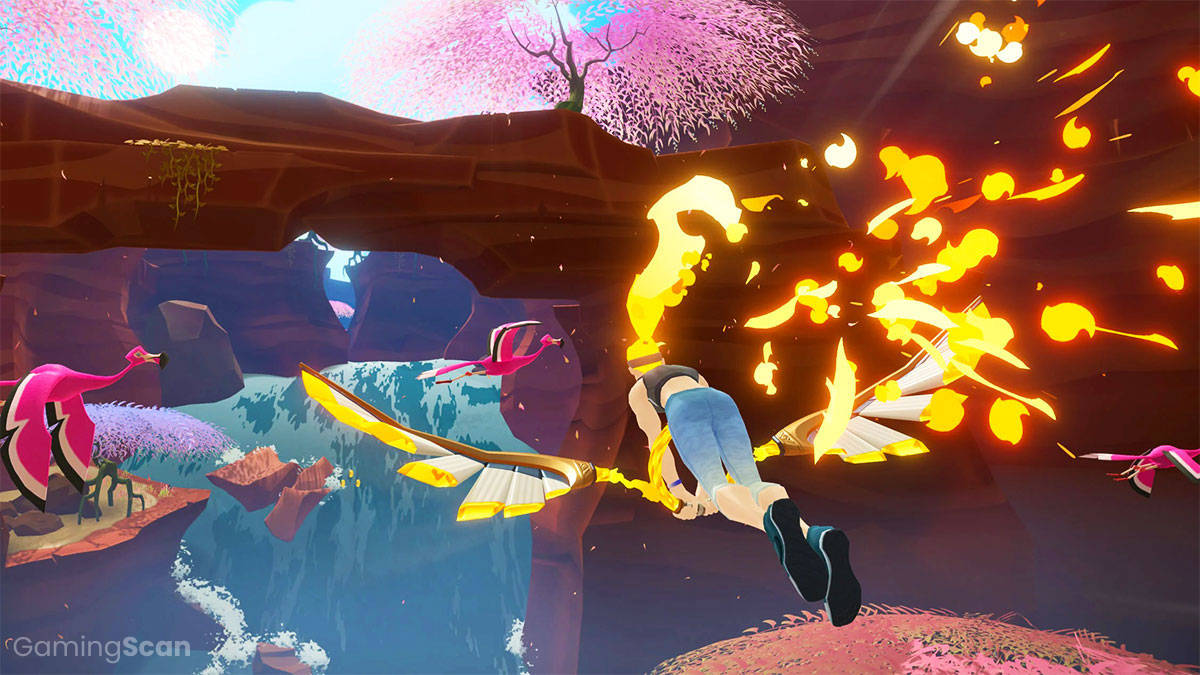 Exercise gaming, or “exergaming,” has come a long way thanks to advancements in motion tracking and VR technology that allow for more accurate inputs and complex motions.

As a result, we’re seeing a lot more titles geared towards players who want to work up a sweat while having fun across PC, mobile, VR, and console gaming platforms.

If you have fond memories of playing Wii Sports with your friends and family while burning some calories, then consider picking up Nintendo Switch Sports.

Serving as a spiritual successor to the hit Wii title, it features returning sports mini-games such as tennis and bowling along with new ones like volleyball, soccer, and chambara.

While it may not offer the most intensive video game workout on the market, you might be surprised by how much movement is involved.

Another Switch exclusive that looks to target exercise gamers specifically is Ring Fit Adventure, which builds off of previous titles like Wii fit and Wii Balance Board.

To this point, it requires its own peripherals, the Ring Fit wheel and thigh strap, to get the most out of movement-driven platforming and RPG battles.

As you progress, you’ll unlock new attacks based on various exercise routines along with workout equipment and smoothie recipes to help power up your character.

Next up is Fitforce, an exercise app and game that allows you to stay in shape from the comfort of your home using just your computer and smartphone.

The game includes an array of interactive exercise mini-games based on popular and effective routines that encourage you to have fun while getting your body moving.

Fitforce relies on your smartphone’s gyroscope and accelerometer to act as a controller sensor that sends real-time data to your PC to help you get the best gaming workout possible.

Boot Camp Fitness is another exercise PC game that focuses on helping you attain the best version of yourself using at-home cardio and bodyweight routines.

It offers a wide selection of exercises designed to target different muscle groups along with a ranking system that gamifies the workout experience.

To keep you going, Boot Camp Fitness includes a 154-song playlist as well as 18 unique exercise locations that can be unlocked just by playing.

Combining both rhythm and exercise, Fitness Boxing 2 provides a great workout for Switch owners who enjoy punching, ducking, and dodging to the beat of catchy pop songs.

To guide you along the way, the game has you selecting from one of nine virtual trainers before taking on exercise challenges tailored for different intensities.

Over time, you’ll unlock new workout routines and feedback from your trainer to help you improve and get the most out of every session.

Just Dance is a popular dancing exercise game series that skyrocketed to success during the Wii-era and is still going strong today.

The most recent installment is Just Dance 2022, which includes a diverse track-list of over 40 hit songs spanning multiple genres and difficulty levels as well as several game modes.

Players looking to increase this number can also sign up for Just Dance Unlimited, a supplementary subscription service that adds hundreds of new songs to the game’s library.

Zumba: Burn It Up

Zumba: Burn It Up is another dancing exercise game like Just Dance that sees you working up a sweat while moving to the beat of 30+ different chart-topping tracks.

Each song allows you to adjust the intensity to your preferred level and the game includes live-action instructors to help guide you along your workout career.

Continuing on, Let’s Get Fit is a Switch-exclusive fitness game that features several pre-designed workout programs covering every facet of fitness.

These range from soft gymnastic challenges to high-intensity cardio sessions and over 100 more fitness routines that can be combined in custom challenges all your own.

Like many other games on this list, Let’s Get Fit assigns you a trainer and uses an in-game calendar to track your progress and motivate you to hit your target for each day.

If you’re looking for an at-home fitness game that doesn’t require you to buy a bunch of fancy peripherals, then Active Arcade is one of your best options.

Exclusive to smartphones, it offers a fresh take on keeping active by having you use your own body to perform actions across multiple mini-games designed to get you moving.

Each one is simple, straightforward, and most importantly, effective at burning calories while requiring minimal setup to get started.

Having been on the market for over a decade, Zombies, Run! has amassed a substantial following of users who rely on it to motivate them to get out and run each day.

The set-up for the game is as follows: you are part of a small outpost trying to survive a zombie apocalypse and must venture into the world to gather resources while avoiding zombies.

It features narrative-driven missions along with daily challenges that reward you with upgrades for your outposts and items to help you and your fellow survivors.

Switching over to VR exercise games, Until You Fall is a hack-and-slash action game with sword-based combat that will have you working up a sweat in no time.

In it, you play as a knight tasked with fighting your way past corrupted enemies in a unique neon fantasy world using melee weapons and magic.

Gameplay is extremely physical and battles can be quite tense as you’re forced to move to stay alive while a driving synthwave soundtrack plays in the background.

PowerBeatsVR touts itself as a high-intensity VR fitness game where players have to punch, duck, and dodge to the rhythm of energetic music tracks.

It offers the option to use pre-selected tracks or add your own music and let the game auto-generate obstacles for you with scaling difficulty options.

The coolest part about this game is that it factors in how much you move as well as how strong you hit objects when determining points for your score.

Next, we’re recommending Blaston, a VR-based competitive shooter that sees you ducking, dodging, and weaving to evade incoming attacks from your opponent.

The game’s main selling point is its PvP mode where two players fire barrages of bullets at each other in slow motion while trying to avoid getting hit and keep their combo going.

Despite the movements required being less subtle than other fitness games on this list, the frequency in which you have to move in Blaston is enough to break a sweat.

Of course, we couldn’t leave out Beat Saber, which is arguably the most popular VR game to get your heart pumping while listening to some awesome tracks.

It presents itself as a sword-slashing rhythm game wherein players have a light saber in each hand and use them to slice through red and blue-colored cubes in time with the music.

Each consecutive hit gets added to a score multiplier that players can maintain by dodging incoming projectiles; in practice, the game will have you feeling like a music-slicing superhero.

Sprint Vector is another fast-paced VR game that will have you burning calories as you race across maps while wearing a pair of high-powered rollerblades.

The game combines free-running techniques with gesture-based controls that allow you to make turns, brake, and climb walls using just your hands.

While this may sound simple enough, Sprint Vector’s environments can be quite demanding and require you to react quickly to stay ahead of the competition.

Dance Central was big in the 2010s but ultimately found itself living in the shadow of more successful dancing games like Just Dance.

However, in 2019 the series made a comeback with Dance Central VR, a rhythm-based title designed from the ground up for VR by beloved music game developer Harmonix.

The game invites you to join the best dance club and groove to over 30 tracks spanning several decades with multiple difficulty options and unique routines to master.

In it, players traverse through 30+ hand-crafted stages filled with enemies and hazards that must be avoided or defeated using five unique weapons.

Things are kept interesting thanks to an abundance of game modifiers and leaderboard tracking designed to keep you coming back for more sweat-inducing action.

Considering boxing is a great form of exercise in real life, it only makes sense that a VR adaptation like Creed: Rise to Glory would fair just as well.

Based on the Creed movies and larger Rocky film franchise, it sees you going toe-to-toe with the world’s best boxers to solidify your reputation in the ring.

What sets Rise to Glory apart is its Phantom Melee Technology, which mimics the real-life effects of throwing and taking punches for a more immersive experience you won’t forget.

Your options for VR boxing games aren’t limited to just movie tie-ins as BoxVR is an award-winning title that will have you jabbing, weaving, and upper-cutting yourself into shape.

The game boasts over 20 hours of unique workout content choreographed by leading fitness instructors for the purpose of getting burning calories while keeping you entertained.

Furthermore, it features an in-game progress tracker and a wide selection of diverse tracks from different genres to ensure you find something that motivates you.

Eleven Table Tennis is another great option for VR sports games that will have you working up a sweat while having fun.

It features some of the most realistic ball physics of any VR title, allowing for detailed control over every swing as you face off against players from around the world or AI opponents.

Developer For Fun Labs is still supporting the title to this day and the best way to get active in the community is to join the game’s Discord group and meet like-minded fans. 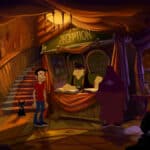