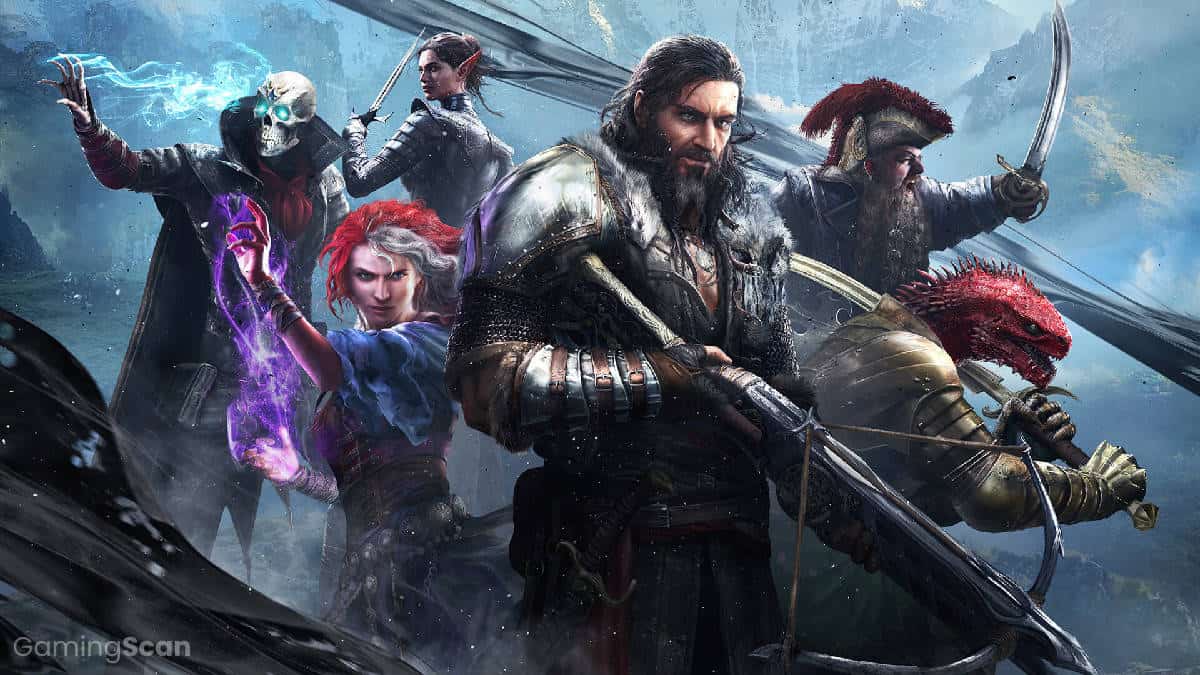 Created by Larian Studios, Divinity: Original Sin 2 is one of the most captivating fantasy RPGs and boasts over 90 hours of content across 70+ quests with multiple endings.

That’s a tall order for other games to compete with, especially for players that have spent countless hours trekking across Rivellon and getting to know what makes its world and characters tick.

We’ll be updating this list in the future with new titles, so make sure to check back and let us know if we missed any of your favorite games similar to Divinity 2!

Solasta: Crown of the Magister

Created and written by lifelong fans of pen and paper RPGs, Solasta: Crown of the Magister is a turn-based tactical RPG that’s sure to appeal to Divinity 2 fans.

In it, players take control of four heroes belonging to different races, classes, personality types, stat distributions, and skillsets that synergize with one another in and out of battle.

The game features a dynamic dialog and action system that allows for personalized playthroughs where your choices help shape the story and characters’ decisions.

Like Divinity 2’s Rivellon, Solasta is full of memorable locations that house legendary treasures, lore, and dangerous foes that can either be fought head-on or dealt with creatively.

Wildermyth is a tactical RPG with a distinct 2D papercraft aesthetic that makes characters and scenery come to life on screen.

Much like Divinity 2, combat is focused on using teamwork and positioning in tandem with characters’ special abilities and objects in the environment.

This allows more skilled players to take advantage of techniques like walling and flanking in order to get the upper hand on their opponent.

Each playthrough sees you leading a new party of procedurally generated heroes who will change over time, growing older, falling in love, and one day meeting their demise.

If you’re a fan of Larian Studios’ approach to game design, then there’s a good chance you’ve already had your eye on Baldur’s Gate 3 throughout its Early Access period on Steam.

We’re happy to report that the game does a great job of continuing the legacy of the iconic D&D-inspired franchise while taking on a more streamlined approach to combat and storytelling.

In it, players assemble a party of heroes before returning to the Forgotten Realms for an adventure rich in friendship, betrayal, sacrifice, survival, and absolute power.

Since the game’s Early Access launch in September 2020, Larian has rolled out consistent patches that look to address performance and gameplay issues based on player feedback.

Next up is Stolen Realm, a turn-based strategy RPG with dungeon crawling and loot-based progression designed for both solo and online co-op.

In it, up to six players can work together to recover a stolen world whose environments shift with every playthrough thanks to procedural generation.

Like Divinity 2, the game features a flexible combat system that allows you to approach every challenge with a variety of tactics based on your hero’s skillset and playstyle.

When combined with multiplayer, this results in sessions that feel both unpredictable and exciting as you and your teammates discover new synergies in and out of battle.

It takes place in a fantasy world ruled by the Immortal Council, eternal rulers who entrust mortal officers of justice called Arbiters to watch over the lands and protect citizens from danger.

Players take control of Kyrie, an agent of the Arbiters who begins enlisting other characters to join their cause as they set out to uncover the corrupt practices behind the Immortal Council’s authority.

Similar to Divinity 2, Fell Seal includes a wide selection of character classes with unique skills and abilities that become available as your progress through the game.

While not rooted in fantasy, Disco Elysium is another story-driven RPG like Divinity 2 in which you play as a detective with amnesia as he investigates a murder.

Hunting down clues and potential leads brings with it plenty of dialogue interactions and opportunities to poke and prod around NPCs’ personal beliefs and biases while dealing with your insecurities.

This is where the game’s tried-and-true RPG mechanics come into play, allowing you to acquire an array of unique skills suited for different playstyles.

If it’s your first time playing Disco Elysium, we recommend picking up The Final Cut edition for its new voice-acted performances and expanded questlines.

The Wasteland series of RPGs also take place in a non-fantasy setting designed to mimic futuristic dystopias where law and order have all but collapsed.

Wasteland 3 is the most recent installment and sees you venturing into an irradiated frozen-over Colorado during the 22nd century where twisted cults and other factions continue to wage war.

Players control a squad of characters belonging to the Desert Rangers, a group of charismatic gunslingers battling their way through this post-apocalyptic world.

Like Divinity 2, the game loves to throw high-risk high-reward decisions your way and force you to carefully assess the potential consequences of your actions.

Another sequel that improves upon its predecessor is Pillars of Eternity 2: Deadfire, in which players control a Watcher, beings with the power to analyze souls and learn from their memories.

The game’s story picks up right after Eothas, the god of light and rebirth has returned to the world of Eora with a sudden and violent bang.

His return causes a widespread panic as souls begin to get stripped from the bodies of anyone near Eothas, including the Watchers.

Therefore, it’s up to the player to help reclaim a portion of the Watchers’ souls and save the world before it’s too late by embarking on a dangerous voyage across a vast, unexplored archipelago.

Serving as a follow-up to Pathfinder: Kingmaker, Wrath of the Righteous is a fantasy RPG where players must travel through a dimensional rift to defeat an army of demons.

Like Divinity 2, the game includes the ability to play as just about any character imaginable by combining 25 different classes, 12 character races, and over a thousand spells, feats, and abilities.

Additionally, the outcome of various quests and the overall story is dependent on choices you make regarding which heroes live, die, stay, or go.

Pathfinder’s combat features two modes of battling: real-time with pause or turn-based, with the option to stick with one or switch between them on the fly.

Red Hook Studios’ follow-up to the grim and gritty strategy RPG Darkest Dungeon maintains the dark, atmospheric tone of the original while including a host of refinements.

Described as a “roguelike road trip of the damned,” Darkest Dungeon II sees you forming a party of misfits traveling by stagecoach across a treacherous landscape brimming with danger.

Instead of locking into a set party, players collect different characters with distinct skills, strengths, and weaknesses that can play off of one another during battle.

The sequel is every bit as addictive and punishing as its predecessor while layering on new features that may appeal to fans of Divinity: Original Sin 2.

Any long-time RPG fan will be familiar with the Shadowrun franchise and its video game adaptations of the sci-fi tabletop RPG.

Although there have been several installments in the series throughout the years, the one we’re recommending is Shadowrun: Hong Kong due to its satisfying combat mechanics and remarkable story.

In it, you take control of a shady character who, joined by a team, takes an opportunity to get revenge on the elite police force that once made your life a living hell.

The game has a 1980s cyberpunk aesthetic that differs greatly from Divinity 2 while being every bit as captivating and visually appealing.

If you enjoy the turn-based aspects of Divinity 2’s combat as well as tabletop-inspired RPGs in general, then Pathway is another game that’s sure to scratch that itch.

Set during the 1930s, it sees you embarking on an adventure to uncover the long-forgotten mysteries of the occult by traveling to ancient tombs.

Like Divinity 2, every encounter relies on strategic decision-making along with a bit of luck considering anytime you die, you’re brought back to the very start with your character’s experience retained.

While Pathway’s pixel-art aesthetic may greatly differ from Divinity’s 3D graphics, both invest a lot of time and effort in building up their worlds via in-game texts and dialogue.

Next up on our list is Tyranny, a story-driven RPG in which you play as an arbiter of law who must decide whether to maintain the status quo or dismantle their leader’s rulership from within.

As a result, it features tried-and-true RPG progression as well as a host of compelling characters, world-building, and engaging storylines a la Divinity 2.

Throughout the game, players will have to navigate multiple factions all vying for control in a constantly changing world while deciding for themselves what it means to truly be free from tyranny.

Torment: Tides of Numenera is a spiritual successor to the widely beloved RPG Planescape: Torment by Black Isle Studios.

In it, players are tasked with escaping an ancient and unstoppable creature called the Sorrow while resolving moral quandaries, disputes, and other thought-provoking dilemmas they encounter.

While it’s admittingly a bit more heady and philosophic than Divinity 2, both games are similar in their focus on adventure and storytelling over action.

If you enjoyed diving into Divinity’s lore and want to explore more serious stories, consider giving Tides of Numenera a chance; you won’t be disappointed.

Any RPG fan on a tight budget will appreciate Path of Exile’s no-frills approach to dungeon crawling in which you battle monsters and complete quests in exchange for EXP and powerful loot.

In it, you take on the role of an Exile forced to survive on the dark continent of Wraeclast before setting off to exact revenge against those who wronged you.

Much like Divinity 2, Path of Exile features a robust character customizer that allows you to combine your class’s unique abilities using tradable gems and a massive selection of passive skills.

The game has a pretty big following that provides a significant boon to its player-driven economy at the expense of being online-only, which might be a deal-breaker for some.