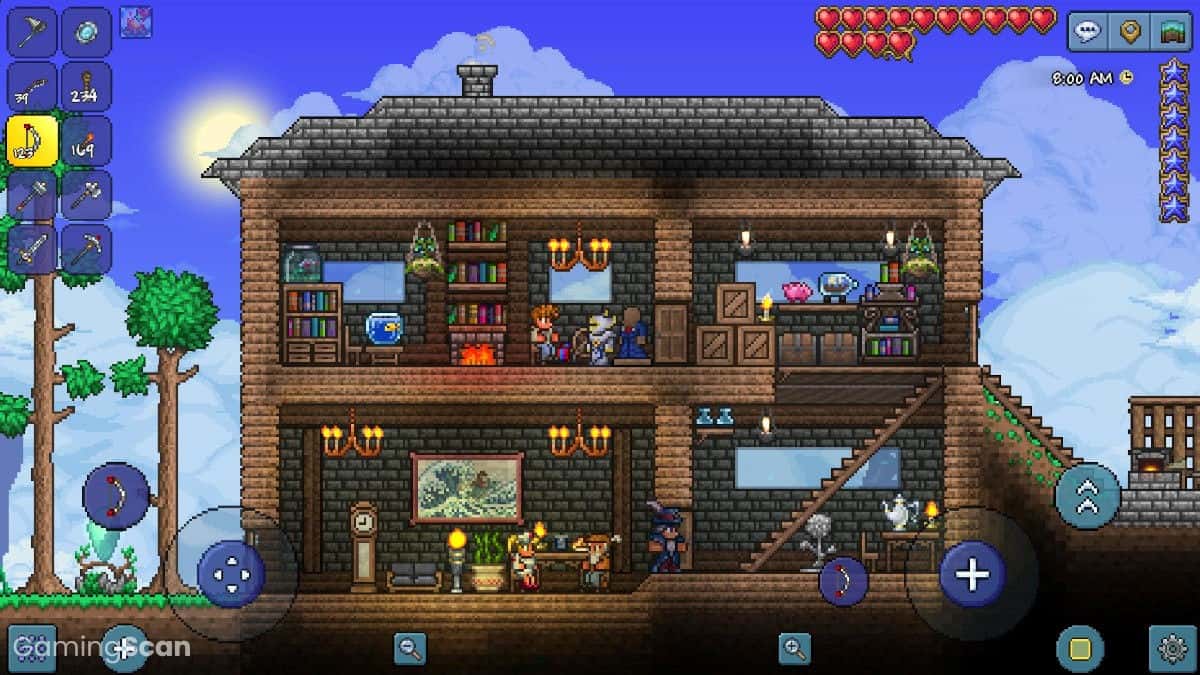 Terraria and other crafting games like it are ripe for customization, and mods are the best way to unlock its true potential.

Whether you’re looking for new story content and items or want to completely overhaul Terraria’s gameplay, we’ve got you covered.

In this list, we’ll highlight the best Terraria mods to install in 2023, including the best mods for improving gameplay, managing inventory, and reducing the grind in Terraria. 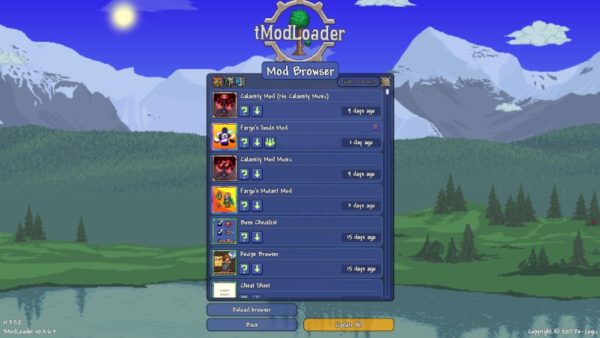 Before you dive into some of the more game-changing mods, we suggest installing tModLoader to make your life a lot easier in the long run.

It’s a mod manager that will keep track of all your Terraria mods and, over the years, has pretty much become the standard since it’s supported by the game’s developer, Re-Logic.

While there are a few exceptions, the majority of mods are compatible with tModLoader; with that said, make sure to read through the download process for each individual mod beforehand. 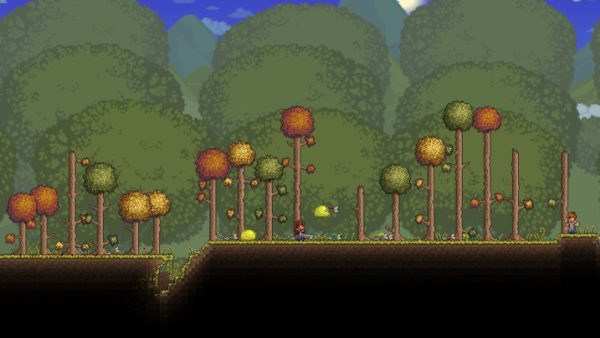 The first mod we’ll be recommending is Terraria Overhaul, which makes many adjustments to the game’s features and even introduces a couple of new things.

One of its main focuses is combat, specifically player movement and enemy AI, resulting in more immersive battles that require you to dodge enemy attacks and remember to reload weapons. 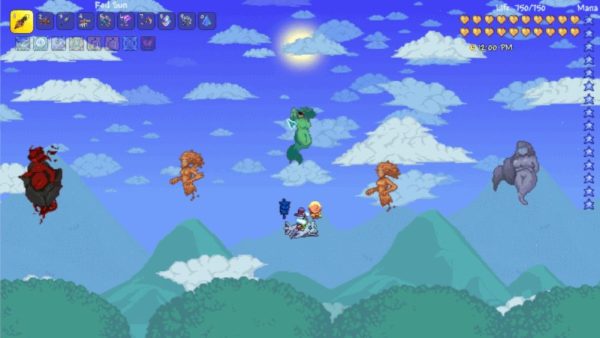 Designed for experienced Terraria players, Calamity is a behemoth of a mod that injects the game with over a thousand new items, 1880+ to be more precise.

If you’ve been playing Terraria for quite some time and feel like you’re running out of stuff to do, this mod is exactly what you need to get excited about playing again. 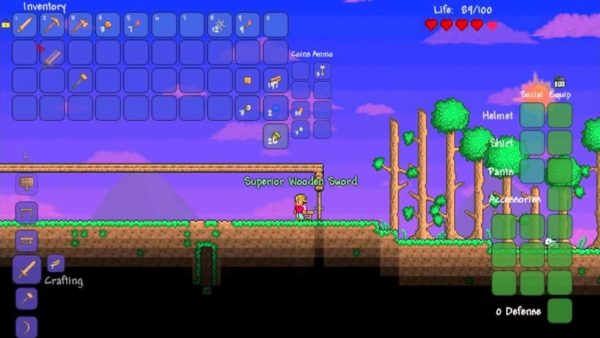 Similar to Calamity, the Thorium mod introduces a breadth of new content to extend Terraria’s playtime and restore that feeling of discovery and wonder you once felt as a new player.

Included are new town NPCs, biomes, and over 2,300 craftable items along with three new classes:  Thrower, Bard, and Healer.

There are also new boss encounters and enemy types that greatly benefit from some light gameplay rebalancing. 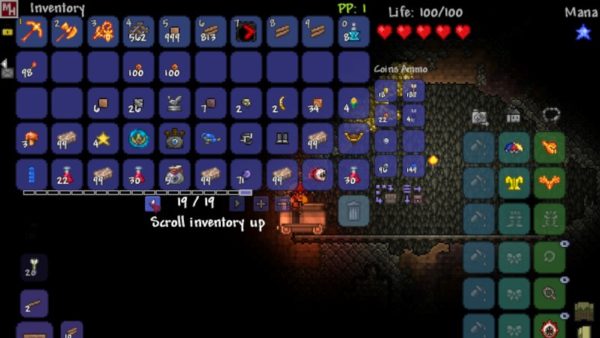 The Extensible Inventory mod does exactly what it says, add extra storage space to your character’s backpack.

It can help ease any concerns of running out of space during a long adventure or not bringing enough potions with before a big boss fight.

Keep in mind, Extensible Inventory is essentially a cheat mod, so use it only if you feel comfortable diverging from how the developer intended for the game to be played. 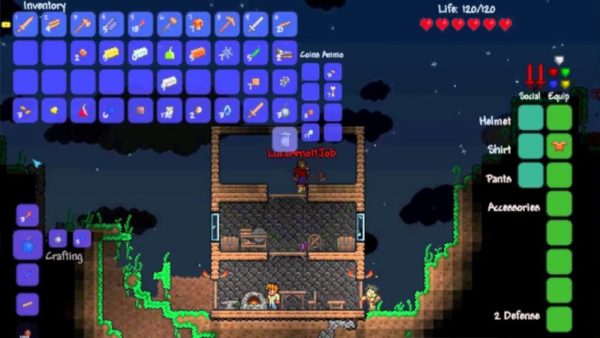 The Recipe Browser mod does what the game’s vanilla version Guide wishes it could, and then some.

Once installed, it provides a robust item searching service that sorts your backpack and any nearby chests to filter through ingredients and streamline multi-step crafting recipes.

This makes it a lot easier to put all the random bits of junk in your inventory to good use and craft furniture or simply improve the experience of having to search through your items. 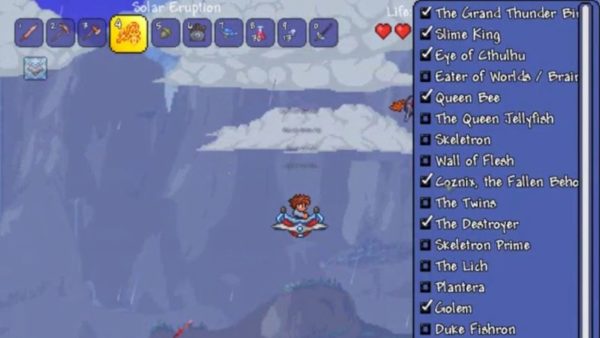 There are many bosses to take down in Terraria already, and even more if you’ve already gone ahead and installed Calamity or Thorium.

To make sense of the game’s extensive roster of baddies, consider using the Boss Checklist mod to keep track of which ones you’ve previously defeated.

In addition to telling you the correct order for boss fights, it organizes them all in a neat little list complete with checkboxes that get filled in the second you beat them. 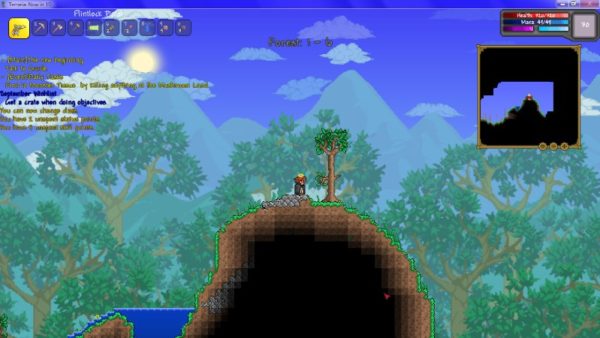 If you’re the kind of Terraria player who enjoys lengthy RPGs, then N Terraria may just be the perfect mod to turn the game into an immersive role-playing experience.

This includes adding a host of player classes, races, a leveling system, an NPC party system, and unique quests designed to tell your character’s story.

Considering Terraria is already a long game as is, this mod really ups the ante while also raising the difficulty level substantially. 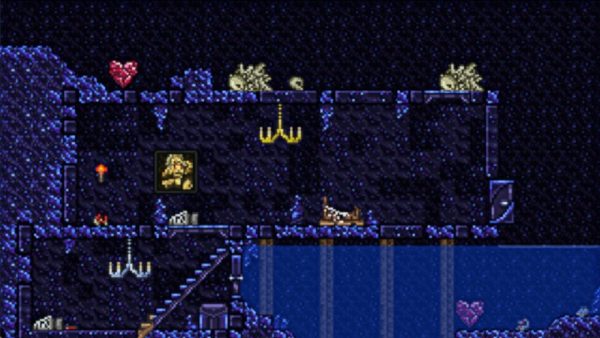 Another helpful mod worth checking out is Terrafirma, which adds a custom mapping tool to the game.

This comes in handy during lengthy expeditions far from your home and can remove some of the guesswork involved with gathering ores.

Terrafirma is also useful for peeking into locked chests, tracking down statues, and sleuthing out underground deserts. 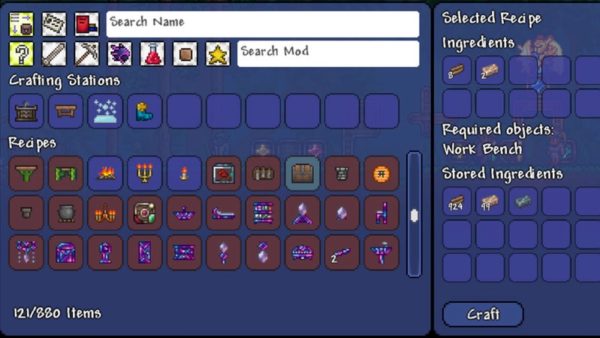 Terraria sure does like its items considering there are thousands in the base game and upwards of tens of thousands once you start messing around with mods.

To stay organized, we recommend installing Magic Storage, a mod that connects multiple storage containers so you can easily access each one.

You can expand your inventory further by simply crafting more containers, and as a bonus, Magic Storage can also be connected to crafting stations to speed up production. 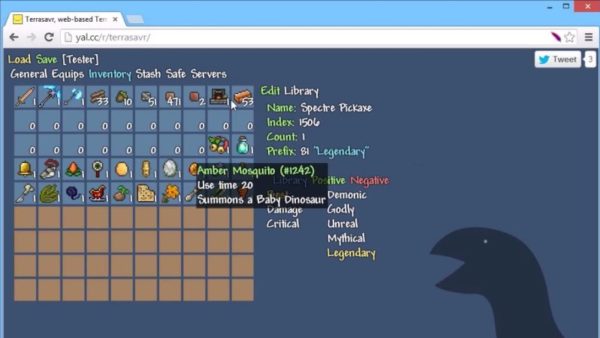 TerraSavr is a web-based mod that lets you import your character and tinker with their variables and apply buffs to any items they’re carrying.

If you’re bold enough of a cheater, you can just as easily look up the item you want and click and drag it into your character’s inventory.

It’s obviously not recommended for new, inexperienced players who would be doing themselves a disservice by not experiencing Terraria how it was meant to be played. 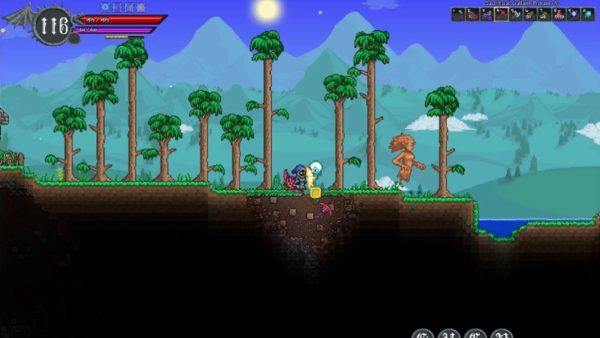 Terraria is a very click-intensive game, what with all the mining and wood-chopping, so much so that modders came up with a way to reduce the block-breaking grind.

Veinminer makes so you’re able to collect entire veins of ore by clicking on a single piece of ore while holding down a hotkey.

It’s definitely a bit game-breaking but when you factor in how tedious a lot of the game’s systems are, having one less thing to worry about isn’t such a big deal. 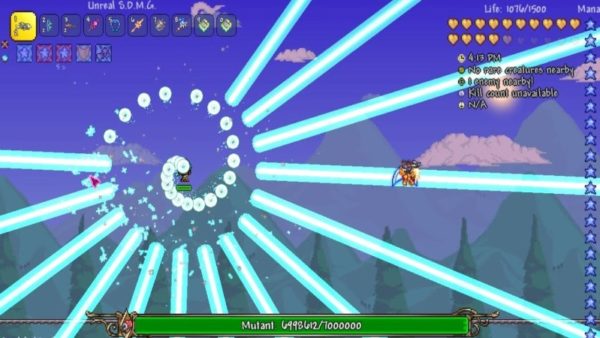 This next mod focuses on quality of life improvements to Terraria that help reduce the game’s notorious grind by adding new NPCs, recipes, and weapons.

Included with Fargo’s Mutant mod are new town NPCs that will sell items tied toward progression, including common crafting materials like wood as well as boss-summoning trinkets.

We’re willing to admit it’s basically just cheating, there’s still a cost for anything you buy, and you’ll always have to defeat the bosses yourself to advance in the game. 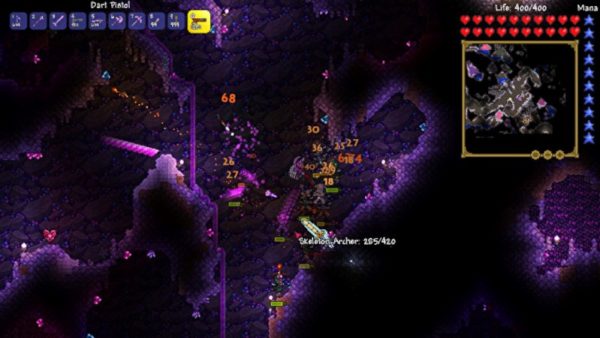 While it may not be the biggest game-altering mod, Wing Slot addresses one of the more annoying aspects of Terraria’s item organization system.

With it installed, you’ll see a dedicated slot for storing your Wings under the Armor and Accessories tab in your inventory.

It’s the kind of quality of life improvement you don’t realize you need until you’ve already spent dozens of hours sifting through inventory pages.

Our last recommendation is less of a mod and more of a standalone application that grants players more artistic freedom over their world’s appearance.

Tedit includes various tools designed to unlock your imagination and fully customize your world by recoloring objects, importing prefab structures, and even creating your own in-game puzzles.

It requires a much more creative mindset than previous mods we’ve touched on but can be deeply rewarding for players who are passionate about making their world stand out and feel truly unique. 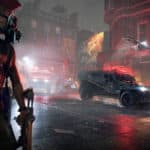