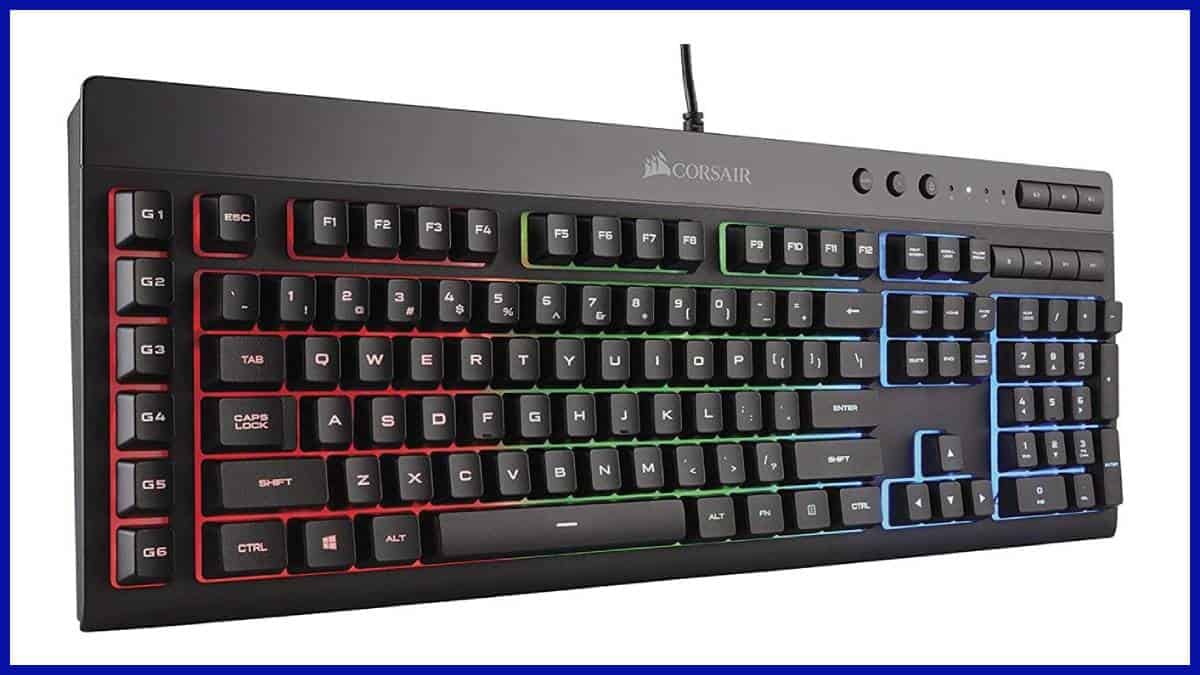 The Corsair K55 offers reliable performance among RGB keyboards under $50.

With a sleek but functional design, the K55 is a membrane keyboard that offers a pleasing array of features while remaining budget-friendly.

It has its flaws of too, and the membrane base may be a deal-breaker for fans of a more traditional mechanical chassis.

What features will you get for your money? How does it perform? Will it last? A certain skepticism creeps in when it comes to affordable hardware.

So, should you spend your hard-earned cash on this keyboard, or save that extra dollar for something even better?

We can’t make that choice for you, but we can guide you through the ups and downs of the K55, from design to performance.

Let’s start with the visual characteristics of the K55. For a product on the cheaper end of the gaming keyboard spectrum, it looks more expensive than it is, thanks to the colorful backlighting – more on that later.

The K55 is primarily made up of matte black plastic, aside from a glossy strip along the top of the keyboard. This looks attractive and adds interest, but get your microfiber cloth at the ready as it does attract fingerprints and dust pretty easily.

At first glance, it looks the part. But let’s go deeper. The look is neat if a little square and thin. Don’t expect any ergonomic grooves, raised areas, or curved edges. The K55 is a slab of a thing, but a sleek one at that.

The RGB backlighting contributes a lot to the quality look of this keyboard, standing out against the matte black finish and making the K55 pop with color.

There are three separate lighting zones, rather than lights behind each key. These zones can be set in a range of color combinations, either static or pulsing and fading between colors – there is even a rainbow effect!

Flip the K55 over, and you’ll find four rubber pads on the underside as well as two retractable feet to raise the back end of the keyboard – pretty standard keyboard features, but still nice to have.

You’ll also find a detachable wrist rest at the bottom of the keyboard that Corsair describes as ‘soft rubber.’

While the wrist rest is not uncomfortable, we wouldn’t go as far as saying it’s soft. But if you like a wrist rest, it’ll do. It is textured too, which adds some grip but does affect comfort slightly.

Let’s talk mechanics – or lack thereof. At this price, it may not come as a big surprise that the K55 is a membrane keyboard, using rubber domes under the keys rather than mechanical switches.

This could be a deal-breaker for users looking for that traditional feel and satisfying click, but it does feel smooth and gives a softer sound that some users may like.

The K55 does mimic a mechanical keyboard in some ways, not only with its raised buttons but also with its eight-key rollover. This is a nice feature, handy for intricate games involving the simultaneous use of many buttons.

Another useful addition to the K55 is the six programmable macro keys on the left side – a real bonus in a keyboard of this price range and super helpful not just for gamers but for other tasks too, such as editing photos or video content.

These macro keys can be programmed without using the software thanks to the handy macro record button found on the glossy strip at the top of the keyboard.

Here you also have a set of dedicated multimedia control buttons and a set of small keys for recording macros and changing lighting settings.

These buttons feel a little flimsy compared to the main keys, though, and they are not backlit like the rest of the keys, so they can be hard to see if you’re in a darker room.

The thin look of the K55 is mirrored in its weight. It is very light, so if you like a sturdier keyboard that can sustain a particularly heavy hammering, this may not be for you.

The rubber pads on the bottom do help keep it in position, though, and the build quality is decent and firm enough to endure a lively gaming session.

The K55 works as a plugin and play keyboard – you don’t need the software to use the main features of the keyboard, with lighting and macros controlled by dedicated buttons and key combinations.

For those who want a fuller experience and even more control, the K55 is compatible with Corsair’s iCue software.

iCue can be used to adjust lighting color schemes and brightness, as well as recording macros for your macro keys. All this can be done, of course, via the keyboard itself, but iCue makes it that bit easier.

For an RGB keyboard of this price, Corsair’s K55 has a lot going for it. The build quality is good, with simple but effective design in two-tone black plastic.

The lighting is eye-catching and has a nice level of customization options for this price range. That said, elements such as the wrist rest, macro buttons, and media playback buttons mean there is more to the K55 than just jazzy lighting.

There is not much clicky sound to the K55, which, depending on your preferences, could be a bad or a good thing.

Plus, it’s not mechanical, but it is quiet – if that’s what you like – with smooth with consistent keys. For those on a budget or just getting into PC gaming, the K55 would be a great purchase. 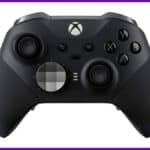