If you’re anything like us, you’re probably sick of low-quality chairs that hurt your back and break after six months, leaving you hundreds of dollars out of pocket. Well, there’s another option. Today, we’ll be reviewing the Herman Miller Sayl – an office chair designed with comfort and durability in mind.

It’s easy to see where this chair gets its name. The unique backrest was inspired by suspension bridges and brought to life by famed designer, Yves Béhar. Now, we know what you’re thinking: “it looks pretty flimsy”, right? Surprisingly, though, the Sayl provides more support than most of the other office chairs on the market.

There’s an added benefit to this very open design. Simply, this chair has incredible airflow. This keeps your body nice and cool, reducing the amount you sweat and as a result, keeping you as comfortable as possible. Better still, the chair is 93% recyclable so it’s not just good for you, but the environment as well. 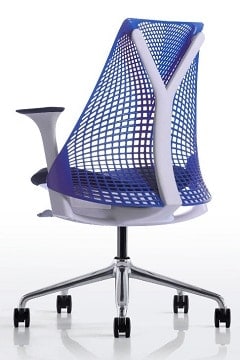 We were pleasantly surprised by the number of customizable options on offer. The basic model retails for around $500 and there are several optional extras you can add if you’d like. With eight colors to choose from and even more for the upholstery, you’re spoiled for choice. There is one problem, though.

The basic model doesn’t include any armrests. This may sound like a fairly petty complaint but the reality is that they’re vital for good working posture. If you do choose to get the armrests, though, you can move them both horizontally and vertically, which is nice. 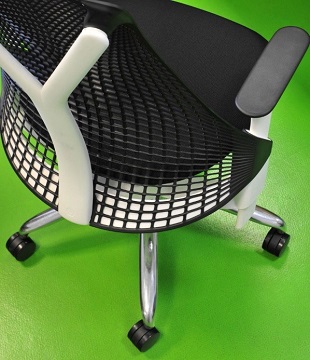 The Sayl comes with a tilt limiter and forward tilt functionality. The latter feature is hardly ever seen, even in high-end chairs, so it’s definitely a welcome addition. You can also choose to adjust the seat depth, which is usually only seen in the most expensive chairs on the market. Believe it or not, there’s more.

How long do you expect an office chair to last? Two years? Five? The Herman Miller Sayl comes with a twelve-year warranty. That means that if you buy it today, it’ll expire in 2030 – the world is sure to be a different place by then but at least your chair will be the same. That’s outstanding! 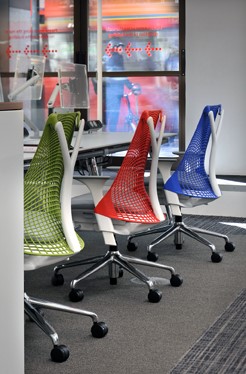 With a 350lb weight limit, this chair is suitable for almost everyone. Although it seems expensive at first glance, $600 over twelve years is just around $50 per year. To put it another way, the Sayl works out to be about the same annual price as a month’s cable bill.

If you’re the kind of person that sits for long periods of time, the Sayl can really help you out. It offers excellent lumbar support, is vastly customizable, and has a striking appearance that sends a message: this is an office like no other, staffed by people willing to take a chance and try new, exciting things. You deserve the best chair around, and the Herman Miller Sayl is definitely up there.

The Herman Miller Sayl office chair is good. It’s actually better than we thought, but still not in the same league as the flagship Aeron chair from the same company.