The Samsung C43J890 is an incredible and large monitor with a lot to offer. If you prefer a bit of distance between you and your monitor, then this 43-inch monitor may be something for you. 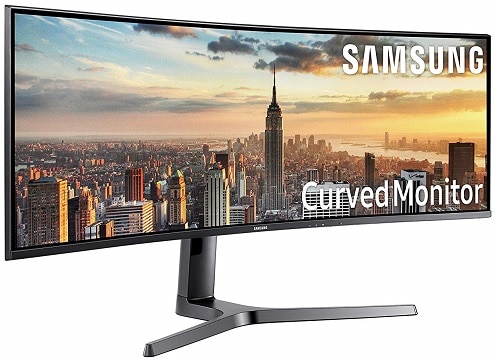 In the past several years, there’s been a shift from having multiple standard-size monitors, to having one ultrawide monitor. This is a little easier on most GPUs and is usually better for those without a lot of desk space who still want to work or game with multiple windows open at once.

But what if there was another option? Something beyond even the ultrawide? What about…a Super Ultrawide?

This monitor is 43” wide and is perfect for those who want to run two or three windows at once, without multiple displays. The C43J890 is a smaller version of Samsung’s C49J890 49” model.

Because of its smaller panel size, it manages to dish out a little bit more performance over the 49” model. The C43J890 gives you a higher 120Hz refresh rate, and a 32:10 aspect ratio, instead of the standard 32:09 you get with most super ultrawide.

So what does all this mean? Let’s take a deeper look. 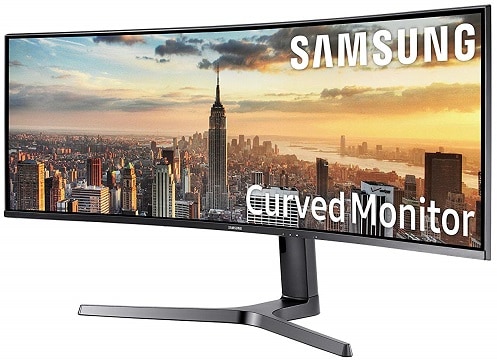 The USB ports output a total of 100W of power to keep everything on your desk charging nicely.

The monitor is also surprisingly adjustable, with 120mm of height adjustment, a -2/17 degree tilt adjustment, and a left/right swivel of 15 degrees. It also has a standard 100x100mm VESA mount on the back that allows for wall mounting or mounting to a swing arm.

The nearly bezel-less 3840×1200 VA panel follows a 1800R curve that wraps around to cover your peripherals and give you a very immersive experience whether you’re gaming, watching a video or stream, or just working in multiple windows.

Thanks to the display size and resolution, what you really have is two monitors in the 22” range at 1920×1200, but combined in one screen with no bezels or other interruptions. If you’re used to dual-monitor setups but want something better for cinematic experiences or gaming, this might be the option for you.

Furthermore, if you’re looking for a dual-monitor setup but don’t quite have the space for it, the Samsung C43J890 could be a great fit for you, especially if you have a VESA-compatible mount or arm.

Because it uses something that is more or less a VA panel optimized for minimal ghosting (which is the primary issue with these monitor panels), you have an incredibly deep 3000:1 contrast ratio. This gives you incredibly high quality black and dark tones.

One note for gamers, the response time is relatively slow for things like competitive FPS play at 5ms, but that’s really not bad at all for a monitor of this size and resolution. For single-player games or casual players, you’ll be just fine. 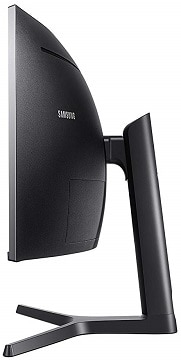 The C43J890 comes with a picture-in-picture mode that allows you to connect multiple devices such as smartphones, desktops, laptops, and even some cameras to one display and then use the built-in KVM switch to control both devices with the same mouse and keyboard.

This is great for streamers or those who use a camera or laptop in the field to dump camera footage but edit on a beefier desktop PC. This makes the C43J890 a very flexible and usable display for many different applications.

You also get a very nice blue light filter for long sessions or late night viewing, as well as a dedicated gaming mode.

You don’t get FreeSync or GSync which knocks it down a few pegs from being a true performance gaming monitor, but for multi-tasking, without over-taxing your GPU quite so much it’s as good as you’re likely to find at this price point.

The Samsung 43″ CJ890 Super Ultra-Wide Curved Monitor comes in at around $900 retail, which sounds like a lot, but it really isn’t too outrageous for a monitor this size, especially when you look at the monitors it can replace.

If you hunt around online, we’ve seen these monitors as low as $750, but it should also drop after its been out a bit longer.

Black Friday/Cyber Monday sales will likely also include some good deals on this monitor.

Overall, I think Samsung hit it out of the park with the C43J890. This is a great monitor if you’re looking for something to replace a dual monitor setup, or you’re looking to upgrade to two monitors, but don’t have the GPU inputs.

The viewing experience is phenomenal and the angle holds up just a hair short of a full 180. If you’re looking for an immersive, cinematic experience for gaming and video, or you just want a functional, space-efficient work area, this is the monitor for you.

If this monitor isn’t quite what you’re looking for, there are a few other options available in the same ballpark. First, you have the Samsung CHG90 which is basically the same monitor, but with a larger screen and a few extra options like a 144Hz refresh rate and FreeSync 2.