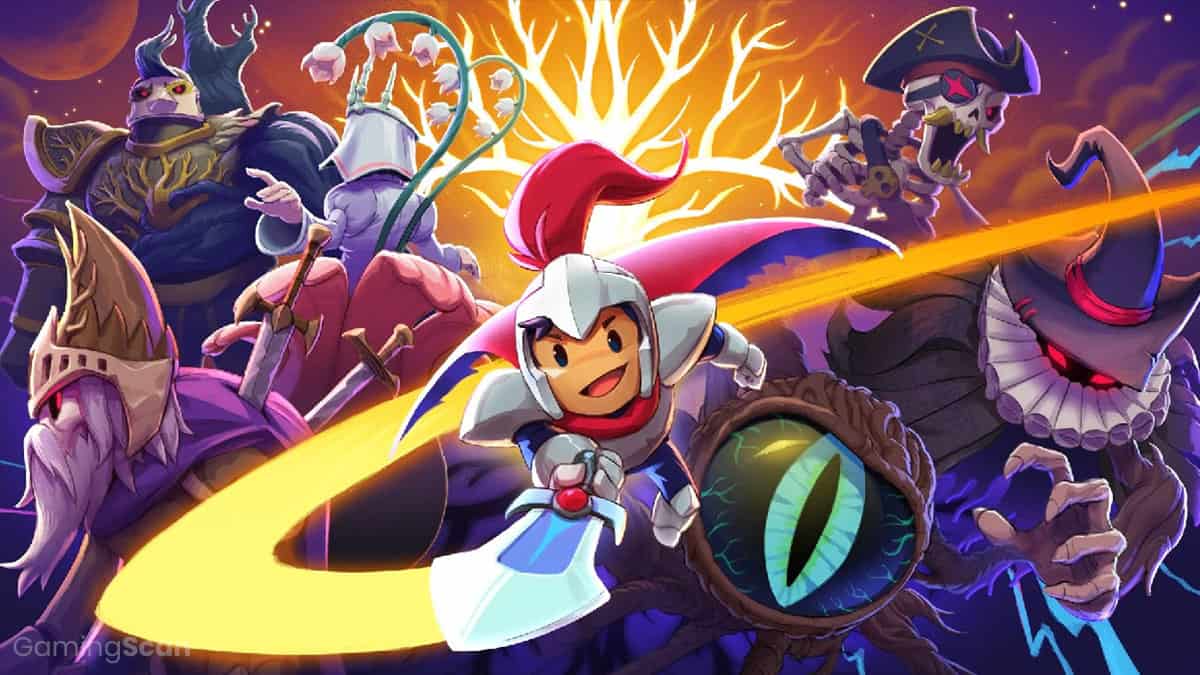 Rogue Legacy is a critically-acclaimed indie metroidvania that’s revered for its roguelite mechanics and genealogical character creation that sees each hero belonging to the same family tree.

Like many games in the broader roguelike genre, each run is wildly different from the previous one as elements are remixed and retooled to keep things feeling fresh and exciting.

In this list, we’ll highlight the best games like Rogue Legacy on Steam, PlayStation, Xbox, and Nintendo Switch to sink your teeth into once you’ve made it to the end.

For more indie recommendations, make sure to check out our growing library of curated gaming lists, and comment below with your top picks for games similar to Rogue Legacy!

Our first suggestion is a no-brainer for anyone who beat the original Rogue Legacy and wants more of the same with a couple of tweaks to make the gameplay experience better.

Having recently exited Steam Early Access, Rogue Legacy 2 is a fantastic follow-up that injects a host of quality of life improvements into the action-roguelite metroidvania.

Much like the original, you play as a hero with distinct traits that get passed down a family tree with each death, bringing you closer and closer to achieving your goals.

The sequel features refinements to its procedural generation system that results in more varied level layouts as well as better weapon and enemy type diversity.

Next up on our list is Skul: The Hero Slayer, another roguelite action-platformer that shares some gameplay design choices with Rogue Legacy.

In it, you play as a small cape-wearing skeleton hero with the ability to swap out his bony head with different skulls to modify his stats and unlock new powers.

Think of it like the traits generator in Rogue Legacy, only players have a lot more control over deciding which traits they’d like to keep.

This is further complemented by a vast array of weapons that work in tandem with each skull to create a distinct playstyle or build for a particular run.

While Neon Abyss’ cyberpunk aesthetic may differ greatly from Rogue Legacy’s more fantasy-inspired visuals, both have a lot in common gameplay and progression-wise.

Billed as a roguelite action-platformer, the game sees you running and gunning your way through randomized dungeons as part of an elite task force from hell.

Like Rogue Legacy, each level is scattered with random items to find that grant the user new abilities which stack to create insanely powerful character builds.

Upon dying, everything is reset, allowing you to dive back in and encounter new challenges, gear, bosses, and other unique gameplay modifiers.

Have a Nice Death

Currently in Steam Early Access, Have a Nice Death is another 2D action roguelike that uses procedural generation to make each run feel unique.

In it, players take on the role of an overworked soul-collector who’s forced to pick up his scythe and fight after his co-workers start making insane demands.

As you make your way around Death Incorporated, you’ll have a chance to utilize over 30 unique weapons and spells that can be upgraded to create devastating combinations.

At the end of each run, you’re given a performance review that determines which items will become available on your next playthrough as well as which enhancements enemies are to be given.

This makes it an excellent alternative to Rogue Legacy with the only real difference being that it features an isometric 3D perspective rather than 2D.

Each run sees players arming themselves with different melee and ranged weapons before heading down one of several routes with unique perks and dynamic encounters.

ScourgeBringer is a roguelite platformer like Rogue Legacy but features much more fast-paced, free-moving traversal designed to keep players moving.

In it, players guide a deadly warrior named Kyhra through an unknown world overrun with ancient machines blocking her path.

To unlock her past and save humanity, players will have to fight their way through a host of enemies and giant bosses holding the secrets of the “Scourge.”

Similar to Rogue Legacy, the game introduces new perks and modifiers that shake up the overall gameplay experience from run to run.

Carrying on, Spelunky 2 is a 2D roguelike platformer with a hand-drawn cartoon art style reminiscent of games like Rogue Legacy.

Much like the original Spelunky, the sequel features a tough-as-nails gameplay loop where players must try and navigate hellish traps and enemies while collecting gold and useful items.

To this point, it uses procedural generation to remix parts of its world and allow for unpredictable level designs, enemy encounters, and rewards.

If you’re in the mood for a game like Rogue Legacy with 3D graphics, Risk of Rain 2 is one of your best options overall.

The game builds upon the satisfying action-platforming loop of its predecessor while translating the action to 3D without missing a step along the way.

Dreamscaper is another 3D action roguelike that manages to scratch a similar itch as Rogue Legacy while bringing its own ideas to the table.

In it, players are cast as a woman named Cassidy and set out to explore her subconscious mind and the many dangers that have manifested within it.

These can range from new weapons and artifacts to lucid powers that let Cassidy manipulate different elements, warp through physical space, and control the flow of time.

Next up, Dead Cells is frequently brought up when discussing the best games like Rogue Legacy on Steam, and for good reason.

It offers a satisfying blend of roguelite progression, metroidvania exploration, and Soulslike combat that can take many runs to master.

Much like in Rogue Legacy, each death sees you transported back to the beginning with a sliver of resources and some experience under your belt to help you get further the next time around.

If you find the genealogical aspects of Rogue Legacy’s progression fun, then you may also enjoy playing Children of Morta, a 2D roguelike dungeon crawler about a heroic family.

In it, you play as different members of the Bergson family as they charge into battle and wage war with an evil entity known as the Corruption.

Each family member has a distinct playstyle that functions as a pseudo-class system where players can hone in on different skills such as crowd control, long-range damage, melee attacks, etc.

Like Rogue Legacy, death comes swift and often in Children of Morta, so you’ll have more than enough opportunities to try and level up each character until they’re stronger.

Aura of Worlds is a roguelite platformer that requires creative thinking to navigate and survive its ever-changing death labyrinths.

Each run has you exploring multiple worlds with unique challenges that entail a great deal of planning as well as some natural wits and quick reflexes to overcome.

These can range from flooded passages to toxic pollen outbreaks and giant bosses that roam about each maze-like level looking for their next snack.

To combat such obstacles, the game affords you many options in the form of weapons, tools, potions, and runes that can come in handy in a pinch.

Another indie roguelike with flexible and fast-paced combat like Rogue Legacy is Wizard of Legend, an action-packed dungeon crawler made by Contingent99.

The story centers on an up-and-coming wizard competing in the Chaos Trials, a series of magic-based challenges wherein contestants must defeat the strongest wizards in all the land.

Each battle is harder than the last and forces players to master the art of dodging and spellcasting in order to survive and make it to the next round.

Similar to Rogue Legacy, death causes you to return to the very start with some of the spells you learned along the way still retained.

Although the roguelike genre is ripe with permadeath mechanics and procedurally generated environments, not many games manage to execute the two particularly well.

Along with Rogue Legacy, one of the exceptions to this is Vagante, another 2D action-platformer that has you taking on the role of a brave adventurer.

In it, players venture into a mysterious cave and discover a dark fantasy world teeming with demonic monsters and untrustworthy characters at every turn.

To stay alive long enough to find the cave’s unfathomable treasure, you’ll have to learn the ins and outs of four distinct biomes by leveraging each character class, weapon, and enchanted item.

Sundered is what you get when you combine Rogue Legacy’s hand-drawn visuals with the eldritch horrors of H.P. Lovecraft.

The game casts you as a warrior who finds themselves trapped in ever-shifting caverns inhabited by terrifying beasts.

To make it out alive, you’ll have to make a tough decision: do you harness the power of dark magic or continue to struggle in your frail mortal shell?

Regardless of your choice, you’ll find no shortage of upgrades and abilities to turn your character into a formidable threat capable of dishing out pain while exploring the game’s intricate cave system.

Last but not least, The Binding of Isaac is a classic indie roguelike that has much in common with Rogue Legacy.

For one, both games share similar cartoonish art styles that do a great job at masking their underlying themes and difficult gameplay.

Secondly, their roguelike design makes each run feel completely different as levels, enemies, and item drops are all randomized.

In Rebirth, players take on the role of Isaac, a child forced to flee to his basement after his mother goes insane, kick-starting a sick and twisted adventure that still holds up in 2023.