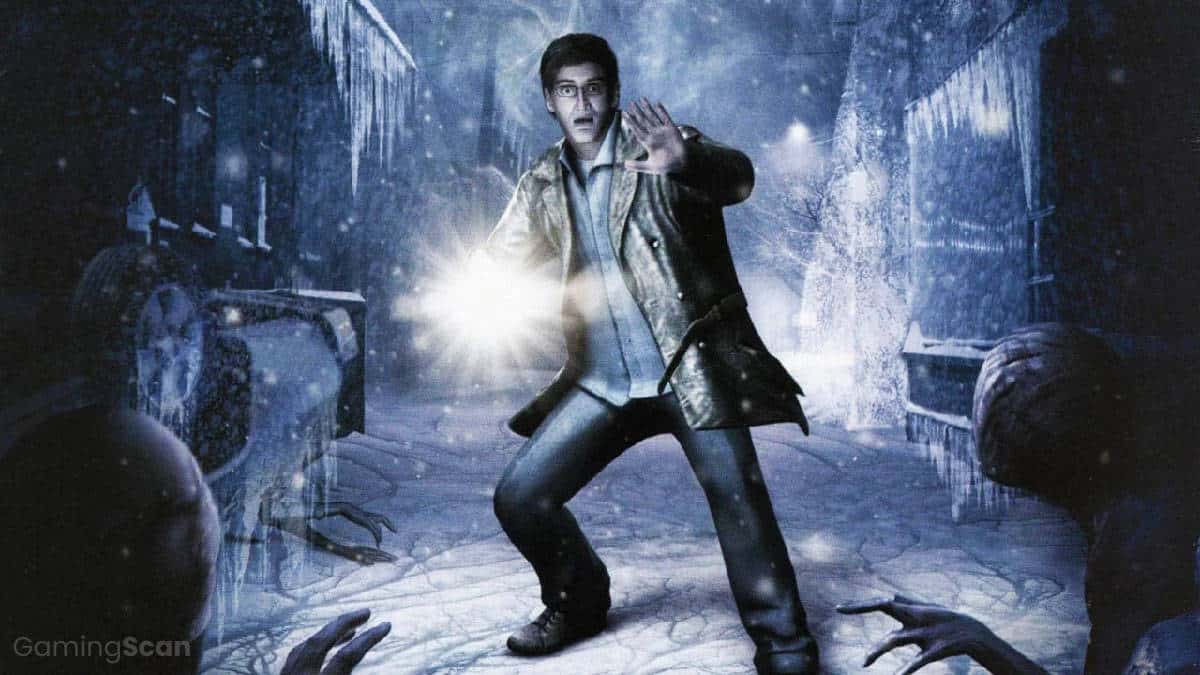 And while Silent Hill fans, in particular, haven’t been treated to a new mainline game since 2012’s Silent Hill: Downpour, there have been rumors of a potential reboot in the works at Konami.

We’ll be updating this list in the future with new titles, so make sure to check back and let us know if we missed any of your favorite games similar to Silent Hill!

To kick things off, we’re recommending Silent Hill fans check out Them and Us, a modern take on classic survival horror games that was created by indie developer TendoGames.

Set during the late 1970s, the game sees you controlling Alicia, a young woman who manages to survive after the bus she was traveling on crashes in the American wilderness.

After waking up in a strange mansion, Alicia is forced to fight for her life as zombies and other horrors try to prevent her from escaping.

Players are given the option of using either a fixed camera with tank controls or a third-person tracking camera with over-the-shoulder aiming during combat.

Next up, Tormented Souls is a throwback to early psychological horror games like Silent Hill and Resident Evil with modernized controls and dynamic camera options.

Players take on the role of Caroline Walker as she investigates the disappearance of twin sisters at an abandoned mansion.

After Caroline wakes up naked and hooked up to a strange machine, she’s forced to fight for her life as dark forces try to prevent her from uncovering the truth.

Gameplay has you solving intricate Silent Hill-like puzzles throughout the mansion and its grounds as well as scavenging resources and fighting back against unspeakable horrors.

Eldervale is another indie horror game that serves as a love letter to early 2000s classics like Silent Hill where exploration and atmosphere take center stage.

You play as Ophelia Delaney, a young woman haunted by visions of her childhood spent living in a sprawling estate where horrible events took place.

Desperate for answers, Ophelia returns to the Delaney Institution where she’ll have to confront her demons, both literally and figuratively.

Like Silent Hill, gameplay centers on traversing creepy environments with the help of maps and consumables as well as solving puzzles to open up new paths.

The Silent Hill games do a great job of using scary environments as a metaphor for the protagonists’ inability to cope with their psychological trauma.

Another game that explores this concept well is In Sound Mind, a cerebral indie horror game that sees the player character having bizarre visions and encounters with a host of terrors.

After waking suddenly to find yourself in a strange building that takes on a life of its own, you begin to encounter victims all exposed to the same experimental chemical that’s corrupting minds.

Fatal Frame is another horror franchise that doesn’t get as much attention these days, so it’s great to see Koei Tecmo remaster one of the most beloved entries.

Serving as the fifth mainline game in the series, Fatal Frame: Maiden of Black Water has players wielding a special camera that lets the user capture supernatural phenomena, specifically the presence of spirits.

As a result, environment is at the core of Fatal Frame’s gameplay, with the player forced to navigate haunted locations as they solve puzzles and uncover clues.

New to the remaster are updated graphics, additional character costumes, and a new photo mode for capturing your spookiest highlights.

Set in the fictional town of Bright Falls, Washington, Alan Wake focuses on a Writer investigating the mysterious disappearance of his wife.

To make matters more complicated, events from his latest horror novel keep coming true despite him having no recollection of writing it in the first place.

With the humans, animals, and objects in Bright Falls becoming possessed by dark forces, Alan must fight to survive by using light and other weapons to defeat the Taken.

We suggest any Silent Hill fans that want to play Alan Wake consider picking up the remastered version, which bundles the base game with its two expansions and enhanced graphics.

The Medium is another retro-inspired horror game from the Silent Hill days of fixed camera perspectives.

The story follows a psychic named Marianne as she’s called to an abandoned hotel where she’ll have to use her powers to unravel its history and help free the spirits trapped within its grounds.

Marianne’s psychic abilities allow her to travel between the land of the living and the dead to commune with spirits and manipulate the environment.

This results in some clever puzzles and a hefty amount of exploration-based progression that all feels very reminiscent of the Silent Hill series.

Resident Evil has fared a lot better than Silent Hill when it comes to keeping up with modern gaming trends while still actively defining the survival horror genre.

If you’re craving an old-school horror game with all the modern bells and whistles, then the 2019 remake of Resident Evil 2 will do you just fine.

In it, players reprise their role as rookie cop Leon Kennedy and college student Claire Redfield as the pair find themselves trapped in Raccoon City amidst a zombie plague.

While the core gameplay experience is essentially the same, parts of the story have been reworked to give supporting characters a bigger spotlight than in the original.

Lost in Vivo is a psychological horror game about claustrophobia that was created and published by indie developer Kira.

In it, your character finds themselves in a series of underground tunnels after a storm causes their dog to fall down a broken sewer drain.

While exploring the labyrinth-like sewer tunnels, you’ll meet other characters that are stricken by abnormal or psychological fears in need of help.

Much like Silent Hill, the game shies away from cheap jumpscares and instead focuses on using its environments to create an unsettling atmosphere.

One of the most celebrated indie games on this list, Detention pays homage to greats like Silent Hill while incorporating its unique visual flair, atmosphere, and story.

Players take on the role of Wei Chung Ting, a student at Greenwood High who falls asleep in class only to wake up and find his school completely deserted aside from one other student.

Together, the pair will begin to unravel a series of disturbing truths of what’s become of Greenwood High, including the evil creatures that now run rampant throughout its halls.

Much like Silent Hill, the game uses the concept of alternate worlds or dimensions to guide players through its slow-burning narrative.

Although The Evil Within games are a lot more action-driven than Silent Hill, the fact they were directed by Resident Evil series creator Shinji Mikami automatically gives them an old-school horror feel.

Players take on the role of Sebastian Castellanos, a detective dispatched to investigate a murder when he suddenly finds himself in a strange, seemingly unreal world inhabited by terrifying monsters.

Enemies can easily overpower Sebastian at the beginning of the game until he obtains certain weapons and upgrades that tip the odds in his favor.

Both the original and its sequel are great alternatives for anyone who wants to recapture the eerie atmosphere of the original Silent Hill trilogy.

While the studio is best known for Amnesia (more on that later), many consider SOMA to be on the same level in terms of writing quality and gameplay.

The story centers on Simon, an AI clone who awakes to find himself trapped in a deep-sea research facility under stranger circumstances.

Desperate for answers, he sets out to explore the facility and uncovers the truth behind the base’s origins, sinister experiments, and missing employees all while trying to slip past mechanized creatures.

Much like Silent Hill, Outlast has played a role in shaping the horror genre, specifically modern survival horror games where the player is completely defenseless.

Instead of guns, your main tool is a handheld night vision camera that’s constantly running out of batteries, forcing you to search every nook and cranny as you explore an abandoned asylum.

Since any attempt at fighting will result in your character’s death, knowing your way around the environment is critical for survival just like in a Silent Hill game.

If you play through and enjoy the original, consider picking up Outlast 2, which raises the stakes with more aggressive enemy AI and sprawling sandbox levels.

Despite having a top-down POV that differs from the Silent Hill games, Darkwood offers a similar survival horror experience with a few modern amenities.

Players take on the role of a silent protagonist stranded in a hostile wilderness teeming with threats both natural and supernatural.

The gameplay loop is structured around a continuous day/night cycle in which players explore and gather resources before hunkering down once it’s dark.

Like Silent Hill, your character’s ability to deal with external threats is rather limited, forcing them to get creative and sometimes rely on chance to survive through the night.

Like many great games, Cry of Fear got its start as a Half-Life mod that kept expanding to the point of becoming its own standalone game.

The story takes place in a deserted Scandinavian town filled with a host of horrific creatures and casts you as a young man searching for answers while the city falls into madness.

It features similar themes to Silent Hill including horror as well as mental illness, despair, and spends a lot of time exploring the nature of our inner psyches.

If you never got a chance to check out this mod in its heyday or want a good Silent Hill-like experience that also happens to be free-to-play, Cry of Fear is worth giving a go.

The other game we’re recommending from Frictional is Amnesia: The Dark Descent, an internet horror sensation that has gone on to sell over half a million copies.

In it, players control a man named Daniel as he traverses the dark and dangerous castle of Brennenburg looking for answers and a way to escape.

Gameplay revolves around a sanity mechanic in which players burn candles and try to avoid monsters and other unsettling events in the dark to prevent Danial from going mad.

After checking out The Dark Descent, you might want to look into its expansion Amnesia: Justine as well as the sequels A Machine for Pigs, and 2020’s Amnesia: Rebirth for more Silent Hill-like horror.

Until Dawn was the precursor to Supermassive Games’ Dark Pictures Anthology and features similar choose-your-own-adventure gameplay that plays out like an interactive horror drama.

The story takes place throughout one night and sees a group of young adults gathering in a snow-covered cabin on the anniversary of their friends’ deaths.

As the night progresses, the group begins to suspect they’re being stalked by a masked assailant and decides to split up to investigate.

From there, things spin out into different branching narrative paths depending on the player’s dialogue and gameplay choices that will determine whether a character lives or dies. 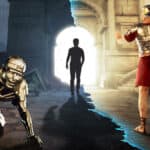