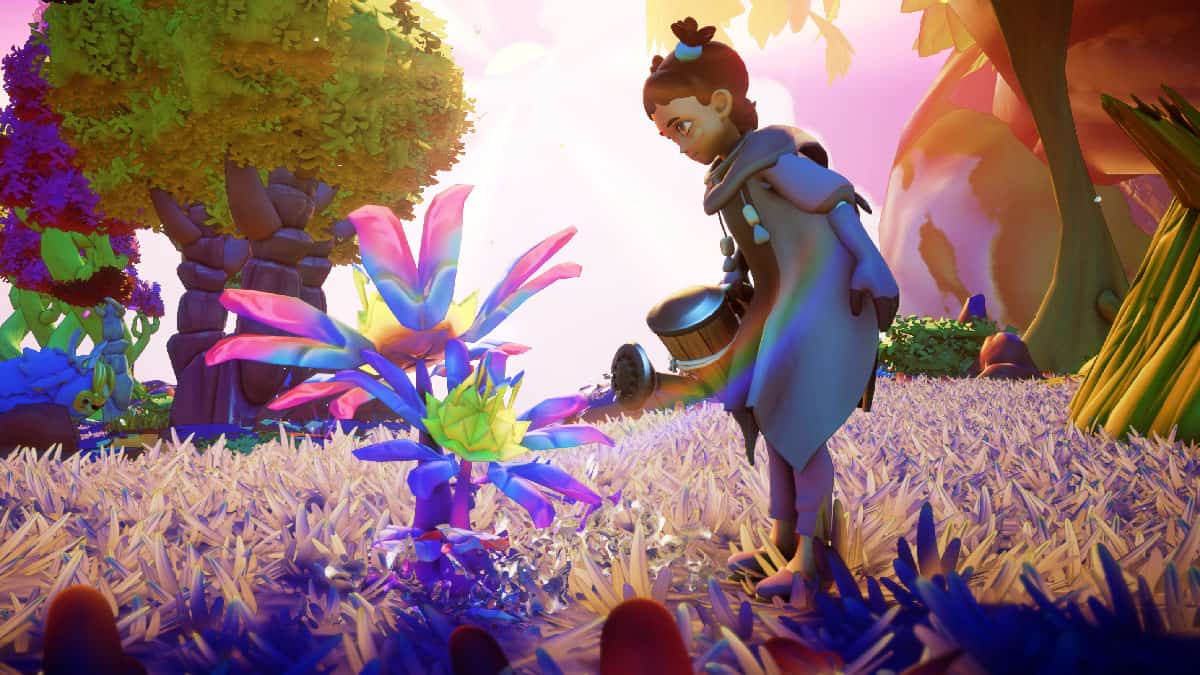 A farmer’s life can be appealing to anyone who enjoys being surrounded by nature, working hard, and embracing a calm lifestyle.

If you get excited by the idea of raising your own digital crops and cattle, then we’ve got you covered with the best farm games on pc.

In this list, we’ll highlight the best farming PC games to play in 2022, including both 2D and 3D farming sim games.

To kick things off, we have the critically-acclaimed farming game Stardew Valley, a one-man passion project created by Eric Barone, aka ConcernedApe.

Eventually, the game opens up and lets you explore other areas such as ranching, wine-making, baking, etc., all while getting to know your fellow neighbors.

A World of Little Legends

Currently in Steam Early Access, A World of Little Legends is an open-world crafting game inspired by 90s farming and exploration games.

In it, players are free to craft the world to their imagination while mining for resources, harvesting crops, building their dream home, hunting, and exploring.

Little Legends’ world is ripe with discovery and fun events to discover, such as local fairs, bustling markets, and more.

Outside of farming and shopping, players can head off on adventures into magical castles filled with countless treasures and dangerous monsters.

Ranch Simulator sees you taking over your family’s ranch, which has fallen on hard times and needs to be updated to have any hope of turning a profit.

Your best chances lay in raising livestock, particularly chickens to start with, though the developer has plans to add cows, pigs, and horses as well.

Money you earn can be used to buy tools, vehicles to help with your rebuilding projects, and better structures to house your livestock and protect them from predators.

Beyond the borders of your cozy homestead lies a vibrant open-world complete with free-roaming deer and bears you can hunt with your trusty rifle.

If you’re looking for a farming simulation with realistic graphics, you could do much worse than the Farming Simulator series, which focuses more on the business aspect.

The latest installment is Farming Simulator 22, which offers superb graphical fidelity and a wide selection of tools, crops, and equipment to explore.

Time in the game is spent managing your farm’s finances and deciding what equipment, livestock, and seeds you’ll need for the upcoming season.

Aside from that, you’re given the option to drive vehicles yourself, hire NPCs to come work on your farm, and even invite other players to help out.

Despite releasing under a different name, the Harvest Moon series is still receiving new games that continue the satisfying farming formula.

Pioneers of Olive Town is the latest installment and sees you following in your grandfather’s footsteps by taking over the family farm and contributing to a peaceful community.

To be successful, you’ll have to work tirelessly to plant crops, raise animals, and build relationships with the residents of your new home.

All the while, you’ll be improving Olive Town’s infrastructure by clearing land, repairing old facilities, and building new ones using upgraded tools.

In it, you play as a sea traveler who washes ashore a vibrant island with no memory of how they got there.

Welcomed by an eccentric cast of locals, you’ll divide your time between adventuring, homesteading, and exploring the island’s many mysteries.

The game offers an abundance of strange and exotic crops to grow and harvest, including Mango, Guava, Chubaberry, and Fairyplum.

If you’re searching for a co-op farming game with simple controls and cute animals, look no further than Bunhouse, a bunny-filled farming sim that focuses on growing plants.

In it, you and your fellow buns are tasked with managing a greenhouse and caring for its leafy plant buddies with the right amount of water and sunlight.

Whether you play alone or with friends, you’ll enjoy exploring the wide selection of exciting upgrades available for your greenhouse.

Farming games are all about wholesome, relaxing fun, and Bunhouse delivers that in spades while allowing you to take your time completing tasks.

Imagine selling everything you own in hopes of becoming a hero, only to show up late to the final battle and miss out.

This is the setup for Be Hero, a farming sim RPG that sees you taking up odd jobs in a tavern in order to save up money for your return trip home.

This includes farming, mining, hunting, fishing, and more which grant experience points you can use to enhance your skills in and out of combat.

Along the way, you’ll get to do cool stuff like help rebuild the destroyed village, explore a mysterious island, and learn recipes that let you craft dozens of items to sell.

Grow: Song of the Evertree

If you enjoy growing your own crops and nurturing a deep connection with the world, then Grow: Song of the Evertree is another farming game worth checking out.

Set in a magical world, the game sees you taking on the role of an Everheart Alchemist assigned the ancestral task of caring for the Evertree.

As you travel across the vast Worlds of Alaria, you’ll discover unique locations teeming with fauna and flora as well as minerals, fish, and bugs you can collect.

Over time, you’ll craft new tools and decorations to share with characters you meet as well as listen to their stories, lend them a hand, and help build the town of your dreams.

The game casts you as a new resident in a vibrant medieval town populated by people who come from all walks of life looking for a fresh start.

Taking on the role of a farmer, miner, fisher, craftsman, and even mage, you’ll discover your true calling while working hard to upgrade your farm, restore shops, and recruit new residents.

My Time at Portia is a farming sim RPG set in a collapsed world where the remaining humans have consolidated to rebuild civilization in a small rural town.

Gameplay is broken up into managing and upgrading a farm, crafting new tools in workshops, and exploring caves containing valuable resources and ancient relics.

Of course, you’ll also have a chance to get to know the other villagers and what makes them tick throughout its 60+ hour campaign.

No need to worry considering the game encourages you to take things slow and soak up Portia’s irresistibly cozy scenery.

Minecraft is a must-play for anyone who enjoys farming sim games or simply building to their heart’s content.

While the game focuses more on exploration and crafting, you can always opt out of adventuring and spend your time cultivating crops and raising cattle.

Additionally, there are tons of Minecraft mods that introduce new crops and animal mobs to the game.

Another one of Minecraft’s strengths is how smoothly it runs on just about any machine, which should come as a huge relief for anyone looking to play a fun farming game on their low-spec laptop or PC.

Described as a “medieval cemetery management sim,” Graveyard Keeper sees you running a graveyard operation that eventually expands into other optional fields, including farming.

You can stick to burying bodies in the ground or start cashing in on all that extra meat by selling remains to the local butcher.

If it wasn’t apparent by now, the game is brimming with dark humor and at times, you may find yourself having to make questionable choices to cut costs and stay afloat.

This includes deciding whether you invest time and resources in quality ingredients for potions or use whatever you can find in nearby caves and creeks, possibly poisoning the entire village in the process.

Travellers Rest is a Harvest Moon-inspired management sim set in a medieval world where players own and run a small tavern with thirsty customers.

The game tasks you with keeping patrons’ glasses topped with their beverage of choice while cooking food and upgrading the bar’s amenities.

Eventually, you unlock a farm where you can plant and harvest crops to incorporate into your business.

Next up, Rune Factory 4 Special is a standout entry in the long-running fantasy-based farming game where growing crops is only a small part of the experience.

Players are granted a nice plot of land to call their own as they tend to crops, raise livestock, and get to know their neighbors.

The coolest part is just about every action in Rune Factory 4 Special rewards you with experience that increases your proficiency in that activity.

Slime Rancher is an adorable farming sim that tasks you with managing a ranch far from Earth on a planet populated by cute slime creatures.

Your job is to catch these slimes, bring them back to your ranch, and feed them various foods in order to produce ‘Plorts,’ which serve as the game’s main currency and method for upgrading your tools and farm.

Each type of slime has unique behaviors and will interact with other species in different ways, so feel free to experiment and see what each one does.

Garden Paws blends management and exploration-based gameplay while putting you in the shoes, or rather paws, of a variety of small and cuddly woodland creatures.

Gameplay is split between managing a farm, upgrading your island’s resources, and exploring environments for treasure as a cute rabbit, chipmunk, dog, cat, or dragon.

The game also features a shop-keeping component where you can price and sell wares, hobbies to explore, such as fishing, cooking, raising animals, and more.

As you upgrade and expand your island’s amenities, more animals will come to see what all the fuss is about.

Littlewood is a 2D farming sim that takes advantage of its pixel art graphics to create a sense of nostalgia reminiscent of retro 8-bit and 16-bit games.

The game tasks you with rebuilding Littlewood its former glory by venturing out into the vast world of Solemn to gather resources and recruit new residents.

For those looking to get into some high-stakes farming, Atomicrops offers a one-of-a-kind experience that’s part roguelike shooter, part farming simulation.

The game features the ability to raise cattle such as pigs, cows, and chickens and even gives you the option to get married.

Doing so unlocks the ability to have your spouse follow you into battle and fight by your side, proving it’s still possible to find love even during a nuclear apocalypse.

Dragon Quest Builders 2 has you reprising your role as the legendary builder tasked with restarting civilization in a world where nearly every person has lost the ability to build things.

As you learn new recipes and expand your village, you’ll attract more NPCs to your fledgling colony willing to lend you their expertise.

In co-op, players can visit each other’s islands, start building together, or simply check out their friends’ creations. 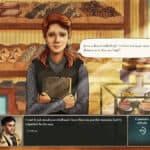