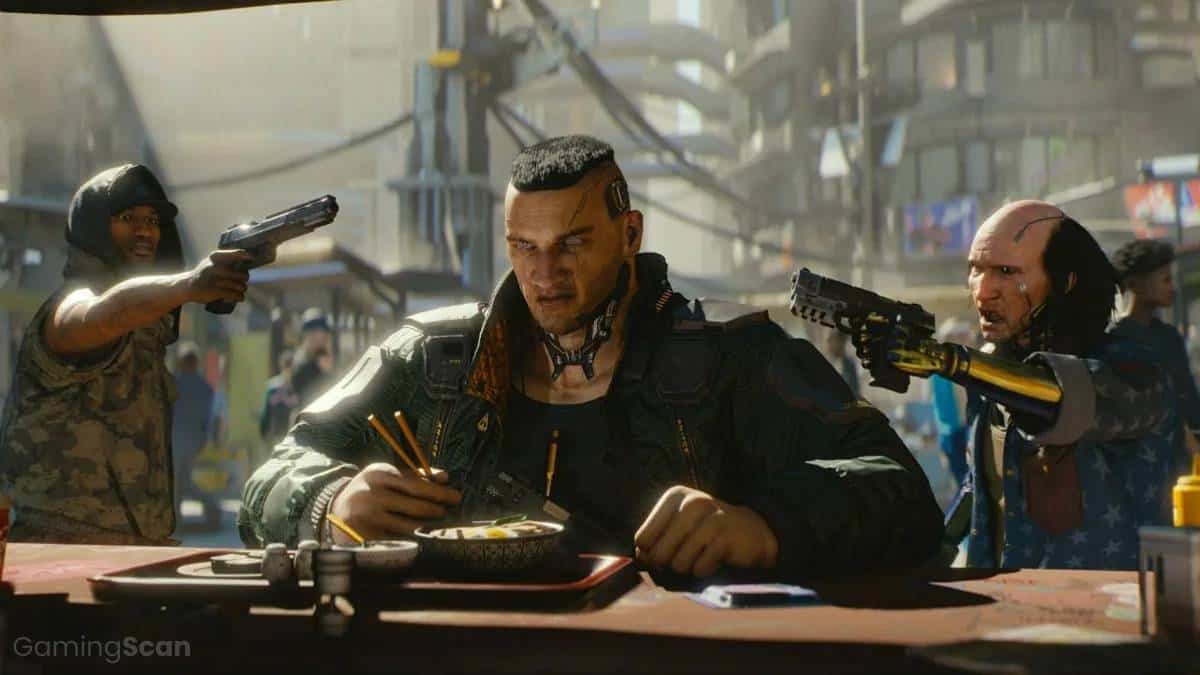 Whether it’s books, movies or games, Cyberpunk themes and aesthetics have played a large role in shaping today’s pop culture.

Blending elements of science fiction, political dystopias, and drug and sex culture, the genre has submerged itself into the hearts and minds of many, including Polish game developer CD Projekt Red.

Having released one of the greatest RPGs of all time with The Witcher 3, expectations are understandably high for the studio’s next project, Cyberpunk 2077.

With Cyberpunk 2077 now being released, many of us are eager to get lost in all the neon lights and political commentary Cyberpunk has to offer.

If you’ve finished Cyberpunk 2077 already and want to try something similar, stick around because this list will highlight the best games like Cyberpunk 2077.

Make sure to check back as we continue to update this article with new games. Also, while you’re here, consider reading through our other curated lists:

The Deus Ex games are known for masterfully combining elements from shooters, RPGs, and stealth games to create an immersive Cyberpunk experience.

In particular, the fourth entry in the series, Mankind Divided, tells a story involving hacker groups, secret agents and the Illuminati. Each faction is driven by distinct motivations, often relating to themes like terrorism and transhumanism.

What sets Deux Ex from other stealth RPGs is its level designs, with each map presenting an intricate sandbox peppered with hidden paths, secret intel and informants who can be bribed. Exploring each of these options gives you a lot more flexibility for overcoming obstacles and will often reward you with a useful item.

Observer is a Cyberpunk-themed detective game from the makers of the horror adventure game Layers of Fear. In it, you control Daniel Lazarskian, a special kind of detective known as an ‘Observer,’ who has the ability to tap into people’s minds via a neural link device.

Any information gathered from your investigation is then used as evidence to solve crimes, particularly murder. Played from a first-person POV, the gameplay sees you analyzing clues and interrogating the inhabitants of a run-down housing unit in the slums of a futuristic city.

Observer’s gritty Cyberpunk visuals and classic noir-style detective gameplay are a match made in heaven. It’s sure to satisfy any science fiction fan, as long as you don’t mind a couple jump scares.

Presented as a fast-paced twin-stick shooter, Ruiner takes place in a Cyberpunk metropolis called Rengkok during the year 2091. You play as a cybernetically enhanced thug who is on the warpath after your brother gets kidnapped by a corrupt organization known as HEAVEN.

Teaming up with a mysterious hacker ally, you set out to uncover the truth behind the organization and destroy anyone who gets in your way. To achieve this goal, your character is equipped with a wide range of augmented gadgets and high-tech weaponry that allow you to slow down time and quickly tear through foes.

Battles can be quite brutal and unforgiving at times, but they’re worth it if only for a chance to explore the neon-drenched streets that make up Rengkok.

Living in a post-dystopian cyberpunk society certainly wouldn’t be easy for the average person. So it’s safe to say that there would be an even bigger market for addictive outlets like gambling, drugs and alcohol.

VA11 HALL-A does a great job of highlighting a diverse cast of characters from a Cyberpunk city set in the future, all from the perspective of a bartender who works at a small bar tucked away in downtown Glitch City.

The citizens who grace Valhalla’s barstools come from all walks of life and can be charmed into revealing their darkest secrets and desires by keeping the booze flowing. As you get to know your clients’ tastes and hone your bartending skills, a branching storyline slowly unravels, exposing just how oppressed the citizens of Glitch City truly are.

While the original Watch Dogs failed to deliver on certain promises, Watch Dogs 2 checks all the right boxes for a great contemporary open-world game while still telling an interesting story centered on a group of hackers called DedSec.

You play as the group’s leader, Marcus Holloway, as he spreads DedSec’s message and tries to combat a corrupt surveillance corporation.

Although it’s set during modern-day San Francisco, the game features an array of Cyberpunk-inspired activities such as hacking into security cameras to keep yourself hidden, hijacking ATMs and breaking into someone’s bank account.

Watch Dogs 2 really shines when it comes to the design of its side missions, which range from infiltrating a new-age cult to becoming a driver for a ridesharing app.

The Red Strings Club is another Cyberpunk-themed drinking game that focuses on telling a compelling narrative about a future society dominated by corporations. You play as a bartender named Donovan who can stimulate different parts of patrons’ minds in order to alter their behavior.

When it’s revealed that the corporations are planning to release a system that will eliminate negative emotions like fear, depression, and anger, Donovan decides to take a stand and use his powers for good.

Gameplay revolves around assessing each customer’s mood before mixing a custom-cocktail tailored to their liking. Satisfying their taste buds allows you to pry into the lives of top-executives and gather information from disgruntled employees.

The Red Strings Club’s cast of eccentric weirdos and brainwashed corporate shills are all wonderfully convincing and will have you questioning your own morals and values.

One of the best Cyberpunk games in recent memory is Cloudpunk, an atmospheric adventure game about a sprawling sci-fi metropolis called Nivalis. You play as a courier working their first shift as part of a sketchy delivery service with a strict don’t-ask-don’t-tell business policy.

As you make your way around the city via a company-issued hover-car, you’ll get to meet all sorts of shady characters, including androids, hackers, rogue AIs and everything in between.

It may not be on the same level as Cyberpunk 2077 when it comes to scope or length, but it does an outstanding job of nailing the Cyberpunk aesthetic while fully delivering on its initial premise.

What’s more, the game continues to improve with new updates, including an optional first-person camera that fully immerses you in Nivalis’ bustling districts and rain-drenched streets.

Considering the unpredictable nature of roguelikes, it seems only fitting the genre would mesh well with Cyberpunk, in which things are constantly in flux and society is barely holding on by a string. Black Future ’88 depicts such as world while also throwing endless waves of traps, robots and junkies your way.

The twist here is you only have 18 minutes before your heart explodes, as you make your way up a mysterious tower, after which you’re brought right back to the start. To keep your ticker working, you’ll have to carefully mix and match certain buffs while still avoiding being slain at the hands of the brutal Wardens that guard each zone in the game.

The more you explore, the more you’ll learn about the tower, and the closer you’ll get to reaching the top floor where the architect awaits.

Prey posits an alternate future where US President John F. Kennedy survived his assassination and went on to create a flourishing space program, allowing mankind to extend its reach to the moon and beyond.

You play as Morgan Yu, a researcher aboard a space station that’s been overrun by a species of violent aliens known as the Typhon.

As you make your way around the massive station in hopes of surviving the alien threat, you’ll have a plethora of gadgets and weapons at your disposal. The game goes as far as to let you augment your abilities using neurological modifiers, or neuromods.

However, install too many mods using Typhon DNA and you’ll lose some of your humanity, causing the station’s security system to start attacking you.

The Witcher 3 may be the furthest thing from Cyberpunk but is a shining example of what an open-world RPG should be. Also, since it’s made by CD Projekt Red, some of its ideas are bound to return in Cyberpunk 2077.

The biggest candidate so far appears to be world design, with both The Continent and Night City depicting sprawling environments that reward the player for exploring its diverse regions.

It’s uniquely designed locales and otherworldly beasts are further complemented by a cast of well-written characters and a gripping narrative centered on Geralt of Rivia, a for-hire monster hunter on a quest to find his adopted daughter and put a stop to an evil force known as the Wild Hunt.

If you’re excited for 2077 and haven’t checked out The Witcher series, now is the perfect time to do so.

Considering how hard it is to make first-person platforming look appealing, Ghostrunner is proving to be a slick and stylish attempt that we’ll be keeping on our radar.

Released in 2020, the game sees you playing as a lethal sword-wielding assassin tasked with leading a rebellion against a villainous figure known as The Keymaster.

As you ascend a massive structure performing fluid parkour maneuvers like wall-running in tandem with a fancy grappling hook, The Keymaster’s minions will try to stop you by any means.

Thankfully, a tech-infused katana allows you to make mincemeat of any foe while looking like a cool Cyberpunk ninja. According to impressions from a recent demo, the game has a lot going for it in both the gameplay department as well as visuals.