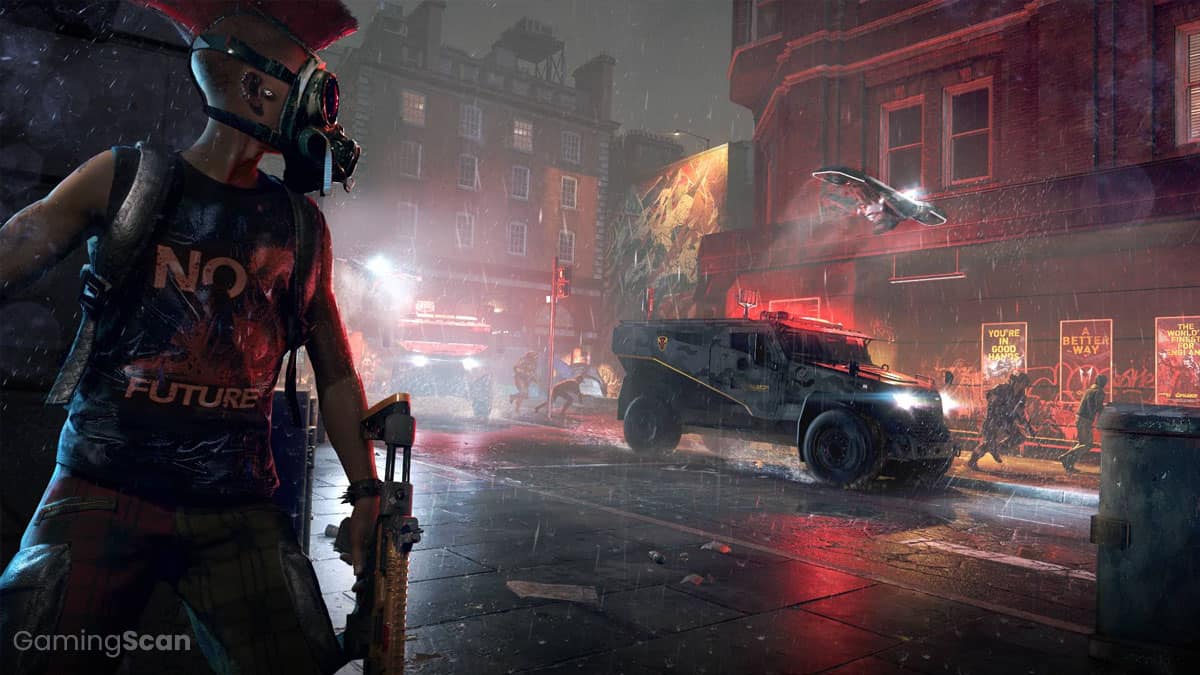 If you enjoyed playing Watch Dogs: Legion or any of its predecessors, then there’s a good chance you enjoy sneaking and hacking your way around open-world sandboxes while causing mayhem.

If we forgot to include your favorite game, sound off in the comments and let us know.

And lastly, make sure to check back as we continue to update this list in the future.

While it may not be without its flaws, CD Projekt Red’s controversial follow-up to The Witcher 3 has a lot in common with Watch Dogs.

Cyberpunk 2077 and Watch Dogs: Legion, specifically, are both set in the future in dystopian open-world cities overflowing with technology and corruption.

Depending on how you develop your character, you can become a hacking wizard or brute force your way through each encounter.

Although Cyberpunk 2077 is more of a traditional action RPG with stats and hyper-specific skills, its upgrade system will feel familiar to anyone who’s played Watch Dogs. 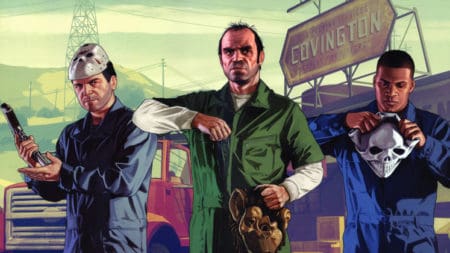 One of the first things you’ll notice in any of the Watch Dogs games is how similar the shooting and overall combat is to Grand Theft Auto 5.

The two share other commonalities, such as open-worlds modeled after real cities, a plethora of side activities to explore, and online multiplayer.

If you enjoy Watch Dogs, then there’s a good chance you’ll like GTA since it influenced Ubisoft to create the series. 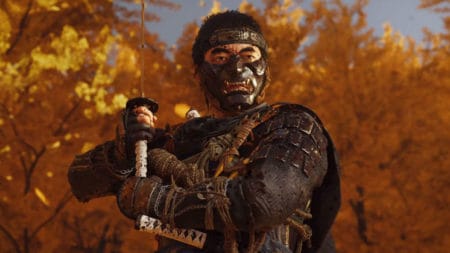 Let’s use our hacking abilities to time travel back to feudal Japan, since that’s totally how hacking works.

Ghost of Tsushima is a gorgeous-looking open-world game that, like Watch Dogs, sees you battling to overthrow an evil regime that’s seized power.

Instead of guns and hacking capabilities, you play as a samurai hero who can wield various weapons, armor, and combat stances.

Similar to Watch Dogs, Ghost of Tsushima will hook and reel you in with secrets and surprises around every corner of its beautifully-rendered open-world. 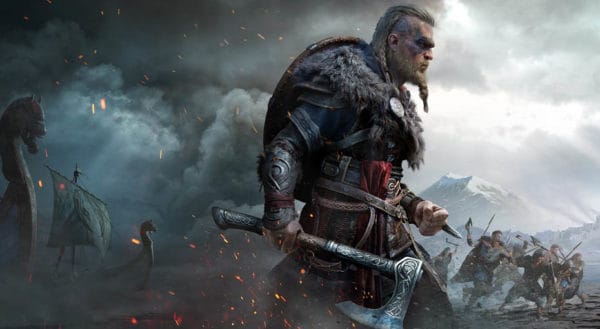 Assassin’s Creed Valhalla is another Ubisoft title that has much in common with the Watch Dogs series in terms of overall design.

Set during 9th Century Britain, the game casts you as a Viking raider tasked with finding a new home for their people amidst a war between the Templars and the Brotherhood of Assassins.

Like Watch Dogs, progression revolves around completing story missions and exploring the open-world in search of rewards and secrets.

It features a lot more RPG elements than other Ubisoft open-world games but other than that, is very similar to games like Watch Dogs. 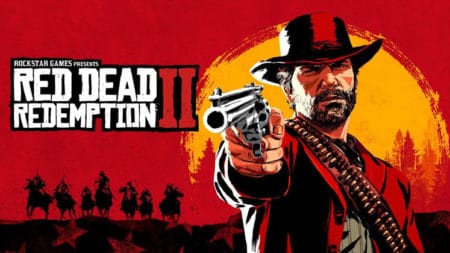 Instead of the hacker group DedSec from Watch Dogs, you play as a member of the Van der Linde gang, going around robbing stagecoaches and evading the law.

When you’re not busy committing crimes, you can take your horse for a ride around the countryside, hunt exotic animals, get into bar fights, or a nice long bubble bath before hitting the hay.

Anyone who enjoyed Watch Dogs: Legion but felt the world could have used some more fleshing out will definitely get their money’s worth with Red Dead 2’s 29 sq. mi sandbox spanning five US states. 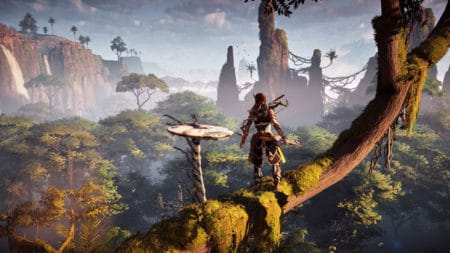 If stealthing your way around secret government buildings is your idea of a good time, have you ever tried slipping past a giant mechanical sabretooth?

Horizon Zero Dawn is an open-world action RPG that has you playing as an outcast fighting for survival in a post-apocalyptic world where mechanical beasts, known as the Machines, have taken over.

Despite the game’s primitive setting, over time you’re able to unlock gadgets and upgrades that harness the Machines’ power to allow for new strategies.

Many of the tools function similar to gadgets from Watch Dogs and allow the protagonist Aloy to scan enemies for weak points, craft distraction tools, and hack machines to turn them friendly.

While you may not play as a superhero in Watch Dogs, many of your hacking tools and gadgets look and feel like something Batman would use to track down bad guys.

So if you’ve already managed to liberate Chicago, San Francisco, and London, why not take a trip to Arkham City and help defend the locals from crazed clowns and deranged criminals.

Batman: Arkham Knight picks up after the events of Arkham City and sees the Caped Crusader on a mission to defeat Scarecrow and a mysterious new villain who’s taken over Arkham.

Batman has his usual repertoire of bat-shaped projectiles along with a grapple gun, remote hacking device, a voice synthesizer, and explosive gel for good measure.

Another Ubisoft title with a politically-motivated narrative is Far Cry 5, in which you play as a small-town sheriff forced to wage war with a drug-addled religious cult in Montana.

In lieu of a tech-obsessed metropolis, the game sees you exploring the great outdoors of Middle America ripe with wild dogs, bears, and cougars that you can train to fight by your side.

It happens to be a lot more combat and crafting-focused than Watch Dogs while still offering a lot of variety throughout its open-world.

When you’re not busy shooting radical cultists, you can explore side activities such as fishing, wingsuit flying, and the occasional Sasquatch hunt. 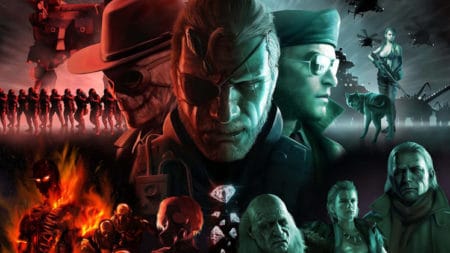 What Phantom Pain lacks in cohesive storytelling, it makes up for with solid stealth mechanics and open-ended missions similar to that of Watch Dogs.

Set after the events of Ground Zeroes, the game has you playing as Big Boss, who, after waking up from a coma, enlists a group of mercenaries to help him exact revenge on those that put him in said coma.

While you’re more than welcome to approach every encounter with brute force, the game rewards you for taking non-lethal measures when infiltrating enemy bases and rescuing prisoners.

By gathering intel and investing in R&D, you’ll be able to construct additional tools that allow you to hear and see your enemies better, as well as extract weapons and personnel from the battlefield. 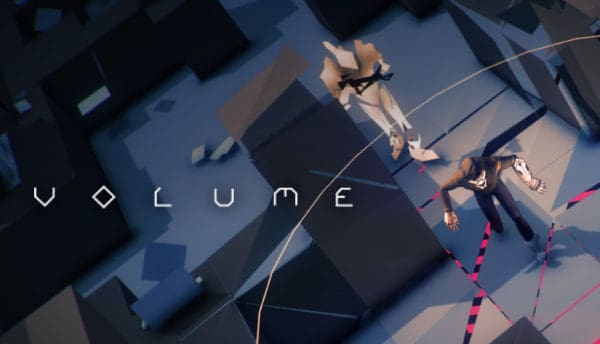 If you take a more stealthy approach to Watch Dogs games, then you’ll likely enjoy playing the indie game Volume, which also features a story revolving around crooked corporations and fascism.

In it, you play as a cyber thief looking to hone their hacking skills by completing a series of simulated scenarios that involve breaking into heavily-guarded offices undetected.

Levels are filled with armed robots that will patrol the area looking for any suspicious behavior. You’ll have to use the environment to stay hidden and distract the robots using your hacking abilities.

While the game’s production quality may not be on the same level as a AAA series like Watch Dogs, both share a similar tone and message about digital freedom. 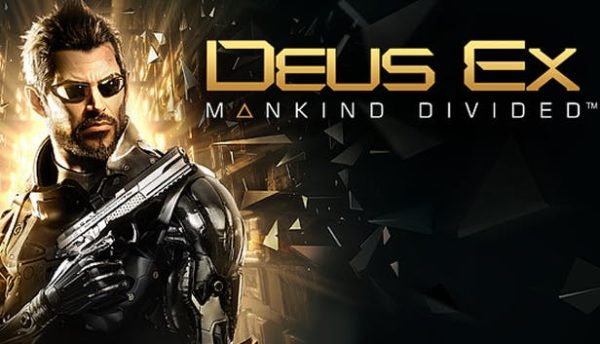 Anyone who enjoys the technology and hacking parts of Watch Dogs’ gameplay should consider playing the Deus Ex games, specifically the most recent entry, Mankind Divided.

The game casts you as Adam Jensen, an undercover hacker on a mission to expose a sinister plot being carried out by the Illuminati (yes, THAT Illuminati).

Like Watch Dogs, the game allows you to approach things from various angles, including both stealth and more action-based approaches.

Jensen can be augmented with a wide array of cyber augmentations that can further boost his hacking, stealth, combat, or social capabilities.

Up until now, we haven’t really discussed the parkour aspects of Watch Dogs traversal and how it affects other parts of the game, namely combat.

Another game that features expressive parkour-based movement is Dying Light, a survival horror game that has you exploring zombie-infested open-world.

To get from point A to B, you’ll often find yourself jumping from roof to roof, climbing fences, and using objects in the environment to distract nearby infected.

While there’s no hacking to speak of, accessing certain areas requires some finessing and a bit of technical know-how. 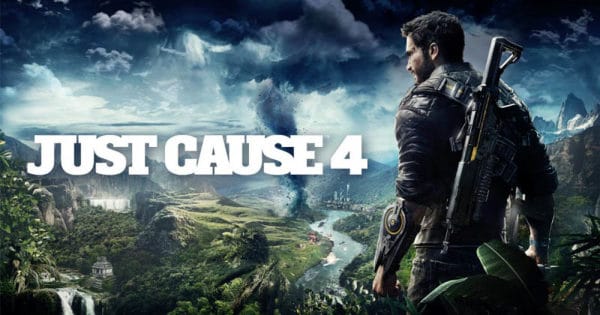 Now if you come to Watch Dogs for the potential open-world chaos, then Just Cause 4 is sure to give you a run for your money.

The game is all about creating mayhem throughout a vibrant South American landscape plagued by corruption at the hands of a private military group called the Black Hand.

You play as Rico Rodriguez, a special operative tasked with eliminating the Black Hand by destroying their outposts by any means necessary (read: explosions).

Rico can wield various weapons and gadgets to turn enemy camps into fiery pits of destruction, as well as a grappling hook for when things get too hot, and you have to flee the scene. 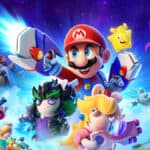