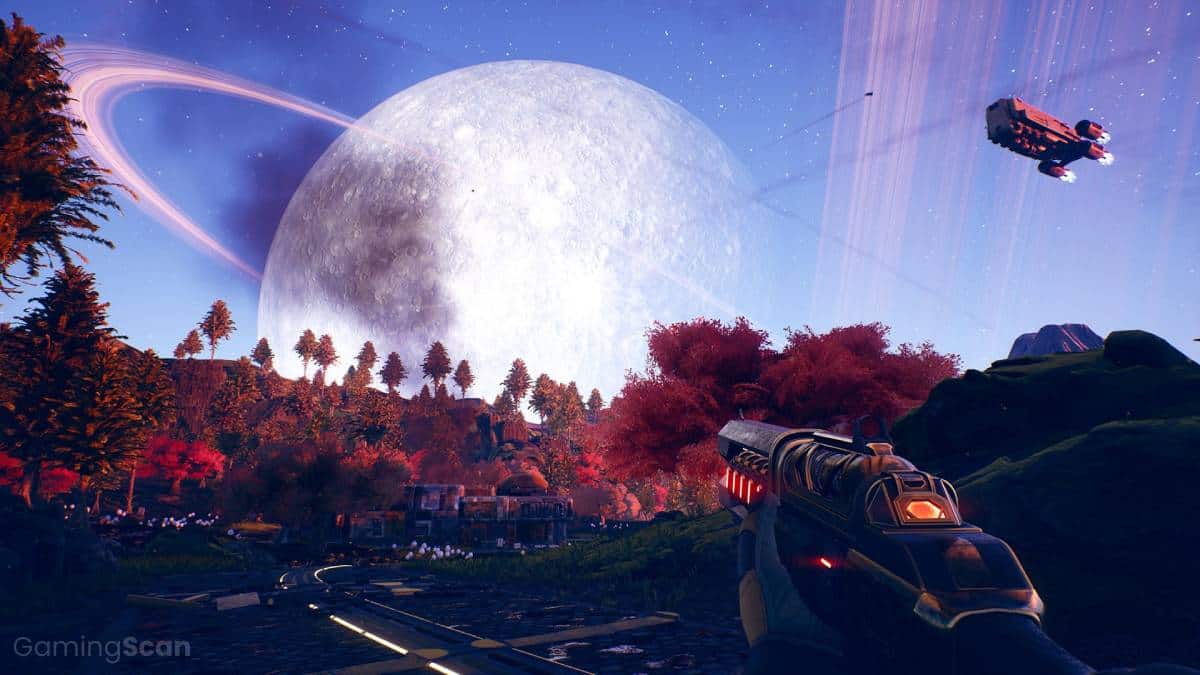 Xbox Game Pass is a highly valuable gaming subscription that allows you access to a library of 100+ downloadable games for just 5 USD on console and 10 USD on PC.

It’s a great way to save money while still playing the best games of this generation. Included are a wide selection of major releases, indie gems, classic Xbox 360 titles, and first-party Xbox exclusives.

What’s more, the library is constantly expanding with new games added each month.

Here, we’ll be highlighting the best Xbox Game Pass games worth checking out.

Make sure to check back as we continue to update this list with new games. And while you’re here, consider reading through our other curated lists:

Two Point Hospital sees you managing multiple hospitals across 15 different scenarios with unique objectives. Similar to other management sims, a bulk of the experience revolves around monitoring members of your staff, building specialized rooms to cure and research new illnesses, and filling hospitals with enough amenities to keep patients entertained while they wait.

Although managing a hospital may not seem inherently entertaining, the game keeps things interesting through the quality of its writing, specifically when it comes to bizarre in-game illnesses and their associated symptoms. Patients suffering from “Mock Star” are convinced they’re a famous rock star while “8-bitten” patients appear as pixelized caricatures of their former selves. Complete challenges, and you’ll receive Kudos, a currency used to unlock new amenities and staff/room customization options.

A Plague Tale: Innocence is an action-adventure stealth horror game set in 1348 France, which sees a pair of siblings on the run from the English army after their countryside estate gets raided. The game’s historical setting coincides with the existence of the Black Plague, and therefore, features both human enemies and hordes of diseased rats that players will have to sneak past.

Controlling both Amicia and her younger brother Hugo, players are tasked with navigating dark sewers, decaying city streets, and dense forests in hopes of making it out alive. While both siblings are pretty much defenseless for a majority of the game, essential tools like Amicia’s torch and Hugo’s slingshot prove useful for solving puzzles and distracting enemies. For a more thorough breakdown of A Plague Tale, check out our review, where we praise the game for its superb voice acting and engaging story.

Obsidian is no amateur when it comes to crafting immersive RPGs packed with interesting and memorable characters, evident by their lastest foray into sci-fi storytelling, The Outer Worlds. In it, you play as The Stranger, an unknown variable tasked with determining the fate of the Halcyon Space Colony and its starving citizens as you journey across its 8-planet star system.

During your adventures, you’ll encounter a range of diverse characters with interesting backstories and questlines to unravel. Every challenge can be handled in a variety of ways based on your preferred playstyle, allowing you to talk yourself out of a jam through dialogue options or overpower enemies using plain-old brute force.

Gears 5 is the latest entry in Xbox’s long-running third-person shooter and features a new story centered on Kate Diaz, an Outsider of Locust descent who finds herself on a quest to learn more about the connection between her family and the subterranean horde. In addition to a new campaign are a plethora of returning and new game modes, including series’ staples like Horde and Team Deathmatch.

Joining them is a new Escape mode, in which players attempt to destroy and escape a Swarm nest after being captured. Considering that an overwhelming amount of Gear 5’s content is playable through local split-screen or online multiplayer, we have to give The Coalition and Xbox credit for keeping couch co-op players in mind.

Bad North is a challenging RTS rogue-lite with some elements of tower defense. In it, you’re tasked with defending a series of small islands from Viking invaders using an array of specialized units. As you progress and win battles, commanders with unique traits and expertise will offer to join you in battle, providing an opportunity to diversify your units and devise new strategies.

While its charming, minimalist presentation may lead you to believe otherwise, Bad North is brutally difficult, with even the slightest slip-up having the potential to cause your downfall. Interestingly, the game provides you with some tools to give yourself some breathing room, such as save slots, adjustable difficulty, and the ability to replay levels. Enabling each of these is entirely options but goes a long way towards removing the repetition associated with progressing in a rogue-lite.

World War Z is an intense zombie shooter in which four-player squads traverse story-based levels brimming with flesh-hungry enemies. Although gameplay and structure feel largely inspired by genre heavy-hitters like Left 4 Dead, there are a few unique elements that set WWZ apart from the rest of the pack, namely the tech behind its massive zombie hordes.

This is attributed to developer Saber Interactive’s proprietary Swarm Engine, a game design tool that allows large groups of enemies to spawn in together and move as a single pack. Witnessing zombie bodies become dismembered as you mow them down is extremely satisfying and delivers the kind of mindless action that seems to be missing from cooperative shooters as of late. For a more thorough breakdown of WWZ, check out our review, where we praise the game for its combat and weapon variety.

The Witcher 3’s intimidatingly-large open-world is simply too enticing not to explore, offering seemingly infinite opportunities to venture off the beaten path and into the unknown. You play as Geralt of Rivia, a monster hunter known as a Witcher, on an adventure to find your adopted daughter who’s being pursued by an evil force known as the Wild Hunt.

Devil May Cry 5 stays true to the series’ core while offering a streamlined scoring system designed for newcomers. The hack n’ slash action game is set five years after DMC 4 and sees players controlling three demonic-powered protagonists: Dante, Nero, and V, as they try to prevent the Demon King Urizen from destroying the mortal realm.

While veteran players will enjoy the return of Dante and Nero’yles, V offers a unique alternative, with his arsenal consisting of creature-summoning spells. If you enjoy chaining together flashy combos and watching your score meter rise, DMC 5 may be the perfect game for you.

Kingdom Come: Deliverance is a story-driven action RPG set in a medieval open-world. You take on the role of Henry, the son of a blacksmith who decides to join a resistance group of combating invading raiders after his parents and village are slaughtered. More broadly, the game is set during the Holy Roman Empire following the death of Emperor Charles IV, causing two heirs to wage war over the throne.

Presented as a realistic medieval sim, Deliverance emphasizes classic survival mechanics such as hunger, thirst, sleep, and hygiene. While you won’t find any dragons or magic, Kingdom Come: Deliverance’s medieval-based combat can be immensely rewarding once you make it past the steep learning curve.

When the Master Chief Collection first launched back in 2014, it was littered with several game-breaking bugs. For the past five years, 343 Industries has been working hard to make the collection run more smoothly. With some updates that address matchmaking and gameplay issues, as well as some quality of life improvements to the classic games, the MCC is in a much better state in 2020.

Forza Horizon 4 is a testament to everything developer Playground Games has learned since releasing the first entry in 2012 while maintaining the high-speed arcade racing sim gameplay the series is known for. Set in the United Kingdom, the game features 420 beautifully-rendered vehicles and introduces a new dynamic weather system that allows the world to cycle through seasons over time.

The switch from racing on high-stakes circuits to the open-roads of a stunningly-recreated United Kingdom gives the player a chance to admire the hard work that went into crafting every open-field, thick patch of trees and pile of snow. When combined with the graphical effects from Motorsport 7 and a diverse roster of unique vehicles, it’s easy to see why Forza Horizon 4 is one of the best-looking games around.

Slay the Spire is a Roguelite card-strategy game developed by American studio MegaCrit and published by Humble Bundle. At the beginning of each playthrough, the game sees players selecting from one of three predetermined characters, each with their own starting conditions that affect the amount of health, gold, and cards players begin with.

The goal of the game is to make your way through several levels of a spire, each with their own number of potential encounters determined by a branching path that culminates in a boss battle. During each run, you’ll come across campfires that allow you to heal or upgrade cards, shopkeepers that offer cards you can buy, chests with random loot, and random choice-based encounters.

Outer Wilds is a narrative-driven mystery game in which players control a character trapped in a perpetual 22-minute time-loop a la Groundhog Day. As the newest recruit of Outer Wilds Ventures, an up-and-coming space program looking to expand its knowledge of space and its many secrets, you’re tasked with exploring nearby planets within your solar system.

Your journey sees you traveling to lore-rich planets with distinct weather conditions and hidden locations to discover. However, unfolding the mysteries of your alien ancestors won’t be so easy, with black holes, oxygen deprivation, and other extreme environmental hazards constantly getting in your way.

While diehard fans have been waiting to play a new Kingdom Hearts game for over a decade, KHIII seeks to deliver something for everyone, even those that are new to the series. Although some parts of the game feel very dated, like the awkward cutscene transitions and character dialogue, an army of elements has been streamlined for a broader audience.

Combat and traversal feel more fluid and refined, offering more seamless keyblade transformations along introducing “flow-motion”, which allows you to interact with parts of the environment during battle. Additionally, the amount of variety in team-up attacks and Disney park-inspired “flow-attractions” moves help break up the hack-n-slash combat. Although the story can be convoluted and hard for new players to grasp, the game does a great job of bringing you up to speed on the game’s events.