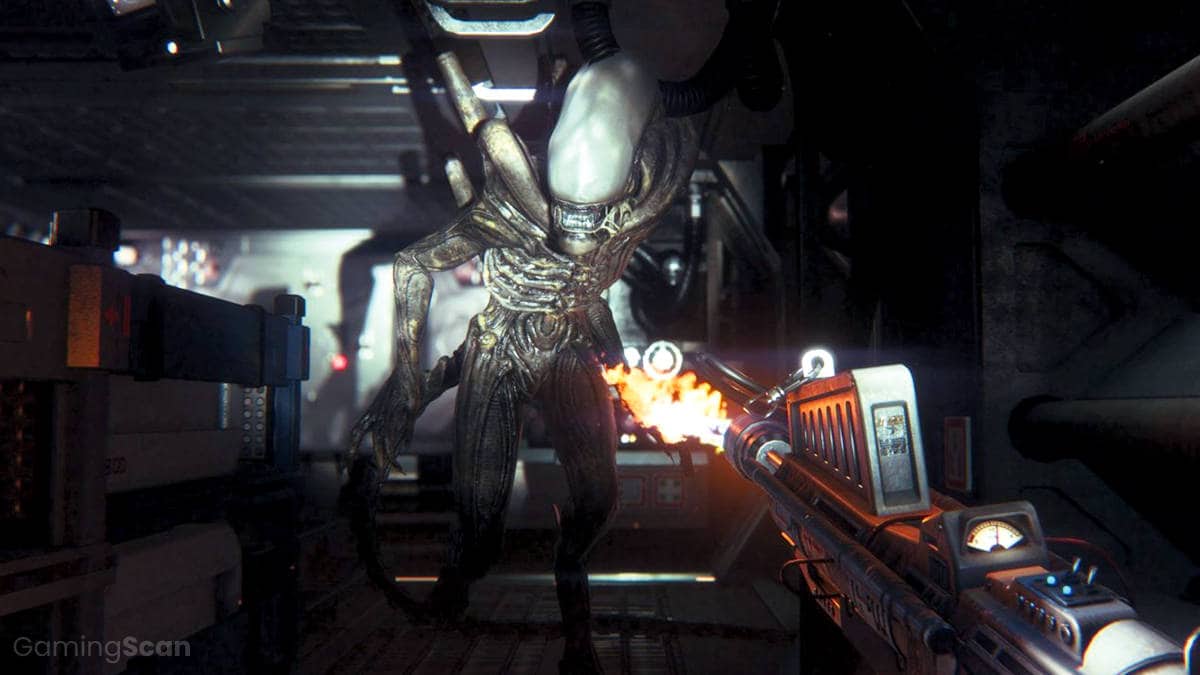 Alien: Isolation is fondly remembered for its enticing blend of stealth, horror, and action game mechanics in which players sneak around sprawling space stations while hunted by a deadly Xenomorph.

While many consider it to be the most intense survival horror experience to date, plenty of other games do an excellent job of exploring the same themes and mechanics present in Alien: Isolation.

We’ll be updating this list in the future with new titles, so make sure to check back and let us know if we missed any of your favorite games like Alien: Isolation!

Although Resident Evil Village plays up the action with intense first-person combat, it also stays true to the series’ survival horror roots while building off of Resident Evil 7’s format changes.

Set three years in the future, it sees RE7 protagonist Ethan Winters living comfortably with his wife Mia and newborn daughter before things take a turn for the worst.

Transported to a remote snowcapped village in Romania, Ethan sets out to save his family while being pursued by various supernatural creatures.

Like Alien: Isolation, Village is ripe with tense stealth sections, terrifying jump scares, and outright creepy moments that will have your skin crawling.

The Metro series shares some horror similarities with Alien: Isolation and has only got better with each new installment, with Metro Exodus being the best entry to date.

Aside from having noticeably improved graphics, the game offers some of the largest explorable sandbox environments in the series.

Combine this with refinements to how the story is delivered and Metro’s classic stealthy gameplay and you have a recipe for a fantastic shooter with horror elements in a post-apocalyptic setting.

And just like in Alien: Isolation, resources are extremely hard to come by, forcing you to search every nook and cranny and come up with creative solutions to avoid danger.

At first glance, Subnautica may not seem that similar to Alien: Isolation aside from the fact that both games feature a first-person POV and crafting mechanics.

However, upon closer inspection, you’ll realize they both center around protagonists that are outnumbered and underpowered in practically every way compared to their enemies and environment.

This is most prominent in the sequel, Subnautica: Below Zero, which has you exploring both underwater and new frozen, above-ground areas teeming with alien creatures of all shapes and sizes.

To survive, you’ll have to rely on resources throughout the environment for crafting bases, submersibles, and weapons in addition to feeding your character and keeping them hydrated.

In Prey, you play as a science researcher aboard a space station that becomes overrun with a hostile alien species known as the Typhon.

From there, you’re tasked with exploring the station’s halls in search of other survivors and a means of escaping the station before it’s too late.

Similar to Amanda Ripley’s journey in Alien: Isolation, Prey’s Morgan Yu will encounter new weapons and tools that can help tip the scales in their favor when battling different Typhon variations.

Instead of having to outsmart one alien, you’ll have to learn the unique behaviors and attack patterns of multiple aliens with powers ranging from shapeshifting to phasing through solid objects.

It was only a matter of time until we got to Frictional Games’ catalog considering they’re responsible for some of the best survival horror experiences outside of Alien: Isolation.

The first title from this studio we’re recommending is SOMA, which focuses on an AI clone named Simon who wakes up to find himself in an underwater research facility under mysterious circumstances.

Desperate for answers, he sets out to explore PATHOS-II and uncover the truth behind the base’s origins, sinister experiments, and missing employees all while trying to slip past mechanized creatures.

From there, things spin-off in some fascinating directions that you probably won’t see coming, resulting in one of the best story-driven sci-fi games along with Alien: isolation.

Aside from SOMA, Frictional Games is best known for the Amnesia series, which is comprised of four titles: The Dark Descent, A Machine for Pigs, Justine, and Amnesia: Rebirth.

The latter game is the one we’ll be focusing on here, even if it’s the weakest in terms of scares, simply because it features more well-defined characters and better-looking graphics.

In it, you play as the lone survivor of a plane crash who awakes deep in the desert of Algeria with amnesia and sets off in search of clues regarding her identity and how she ended up there.

As you explore mysterious and dark caves, dungeons, and castles, you’ll need to keep a light source with you or risk going insane as you’re stalked by a host of otherworldly monsters.

Like Alien: Isolation, the Outlast series has played a role in shaping the modern survival horror game by tossing players in increasingly harrowing situations with no means of defense.

Each entry sees you navigating through pitch-black environments patrolled by terrifying and sadistic enemies who will stop at nothing to squeeze the life out of your body.

Your main survival tool is a handheld camera with night vision and continuously depleting batteries you have to scrounge for from level to level lest you risk having to walk around aimlessly in the dark.

Outlast 2 ups the ante by pitting you against even more powerful foes in massive sandbox environments with plenty of places to hide, or if you’re like us, get completely lost in.

While developer/publisher Bloober Team is better known for their survival horror series Layers of Fear, we’ve chosen to highlight a different title in the studio’s catalog for this list.

Observer is best described as an immersive cyberpunk detective game about a private investigator that can tap into others’ minds to gain evidence using a special neural link device.

This tool proves to be a double-edged sword, as the detective’s mind starts deteriorating the longer he’s hooked up to his witness, resulting in visions of ghastly figures and terrifying imagery.

Like Alien: Isolation, the game uses the unknown to create a sense of fear; you’re never sure what you’ll see when you strap on the neural link or what will be waiting for you when you come back to reality.

Although Dispatcher has a much smaller scope than many of the games covered on this list, it still manages to nail the concept of being stalked by a mysterious monster on a space station.

In it, you play as a lone dispatcher whose crewmates get into an accident and become infected with a virus that turns them hostile.

Related:Best Upcoming Indie Games 2021 (And Beyond)

At the same time, alien monsters have forced their way onto the space station, leaving you with no choice but to explore its halls looking for a way out.

Like Alien: Isolation, the game does a great job of creating an ominous atmosphere where every turn could spell out your death, or at the very least, provide a good jump scare.

The Beast Inside is another notable addition to the survival horror genre, complete with superb graphics and immersive gameplay you wouldn’t expect from a backer-funded indie project.

Set during the final days of the Cold War, it sees you taking on the role of a CIA codebreaker that wants to start a new life and decides to move his wife into a house located deep in the wilderness.

However, it’s not too long until you discover unsettling clues about the house’s history while reading the previous owner’s journal, at which point the game switches perspectives and goes back in time.

Swapping back and forth between both character’s perspectives, you’ll slowly piece together what happened while solving physics-based puzzles and avoiding ghastly apparitions.

Considering how limited new Alien game releases are nowadays, it’s worth mentioning that an officially licensed co-op shooter set in the Aliens universe is due out this summer.

In Aliens: Fireteam Elite, three players team up to explore infested space colonies filled with a host of hostile enemies, including androids and Xenomorph aliens.

There are five classes with unique specializations to pick from, and players can unlock additional weapons, abilities, and customizations over time by leveling up throughout the campaign.

From a gameplay perspective, it has a lot more in common with games like Left 4 Dead than Alien: Isolation, though it does touch on elements of horror and you can probably expect a jump scare or two.

Another upcoming title that builds off of the terrifying hide-and-seek-style gameplay featured in Alien: Isolation is Hello Neighbor 2, which sees casts you as a kid trying to escape their murderous neighbor.

While the original Hello Neighbor was a pretty experimental title for the Xbox platform that didn’t mesh with critics’ tastes, the game managed to catch on thanks to YouTuber let’s plays.

So much so, that Microsoft decided to go all in and fund a sequel that’s currently in production by indie developers tinyBuild and Eerie Guest.

Hello Neighbor 2 will include refined enemy AI, a new setting, and new combinable items littered throughout environments that can be used to progress and/or deter the Neighbor.

The final game we recommend Alien: Isolation fans keep on their radar is the upcoming remake of Dead Space for PC and consoles.

For those unfamiliar, the game takes place on a spaceship overrun by undead monsters and sees you trying to navigate dark, claustrophobic areas while fighting for your life.

While EA hasn’t quite nailed down a release date, the plan is to release the game by late 2022 if everything goes according to plan, so expect to hear more in the coming months. 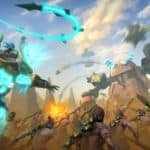