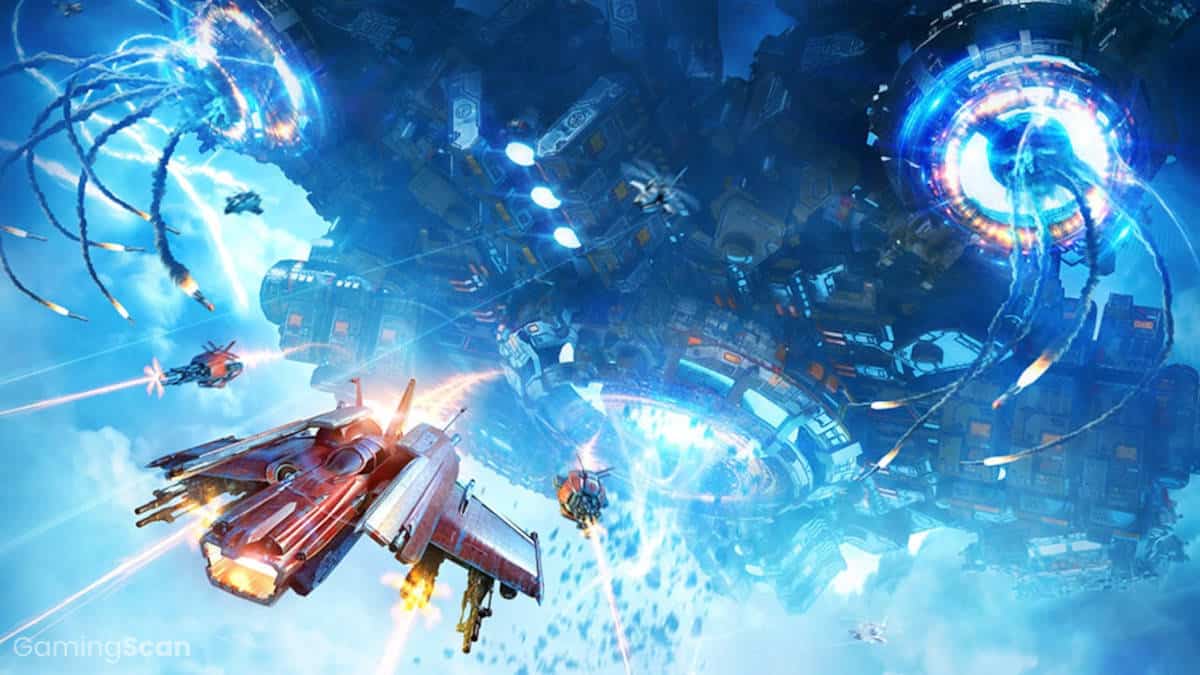 Shoot ’em up games, or shmups, are an indie game staple of the arcade era that have managed to find a new life on PC and home consoles, primarily the Nintendo Switch.

And while you no longer have to cough up coins to play your favorite title, shmup games are keeping the spirit alive with arcade-inspired gameplay and presentation.

To get us started, we’re recommending Cave’s insect-themed fantasy shooter Mushihimesama, which received a mobile port in 2011 and a PC version in 2015.

In it, you play as a magical princess tasked with defeating an army of bugs using three weapons and two option types across five vertically scrolling stages with animated backgrounds.

Like many shmups, Mushihimesama includes several game modes with varying difficulties: Novice, Normal, and Arrange, each tailored for a different type of player.

Normal stays faithful to the original arcade game, whereas Novice tones things down for newcomers, and Arrange switches up gameplay so you start off with max firepower and auto bomb drops.

Ikaruga is one of the most popular titles in the shmup genre and was developed and published for arcades by Treasure in 2001.

Fast-forward 15 years and the game can now be enjoyed from the comfort of your PC, with the original gameplay, soundtrack, and visuals all intact.

Blending both shoot ’em up combat and puzzle gameplay, Ikaruga introduces a color-switching mechanic that sees you absorbing black and white projectiles based on your ship’s color.

Any bullets you absorb count towards a gauge that unleashes a powerful attack capable of wiping out any enemies on screen when filled.

Here we have another Cave Interactive classic shmup, DoDonPachi Resurrection (also known as DoDonPachi DaiFukkatsu in Japan), originally released for arcades in 2008.

In it, you play as one of three time-traveling pilots as they attempt to fix the past after an evil android corrupts the timeline.

Along with your ship of choice, the game features three attack styles and a Hyper Counter system that lets you cancel bullets and increase your score.

There are also 8 different modes tailored for newcomers and veterans alike, along with support for 2-player local co-op and online leaderboards.

One of Gunbird‘s main selling points is its weird cast of playable characters that each bring a unique flavor to the game’s combat.

While the PC port was developed and published by City Connection, it retains Psikyo’s original art style and gameplay feel with some modern touches, such as the ability to remap controls.

The game’s story is quite comical, revolving around a magic mirror whose pieces must be assembled before a wish can be granted.

There are 7 difficulty options included, a co-op mode designed for two players and a Score Attack mode that lets you compete for the high score against players from around the world.

However, it also provides you with in-game tools to help you get better at the game, such as a Break system that rewards you with invincibility and increased firepower for a short period.

There are also multiple ships to choose from, each with distinct movement speeds, option arrangements, and Break gauge refill rates.

Another demanding bullet hell-style shmup worth checking out in 2022 is Danmaku Unlimited 3, which emphasizes a ‘risk versus reward’ approach to combat.

This is achieved through its Spirit/Graze system, which turns projectiles from any downed enemies into ghost bullets that won’t cause damage and instead power up your ship.

Danmaku Unlimited 3 also includes some bullet hell staples designed to be accessible to newcomers, such as limiting your hitbox to the very center, or core, of your ship’s body.

The campaign consists of five stages, each culminating with a multi-stage boss fight and up to 25 weapon combinations to unlock and experiment with throughout the game.

You play as one of five angels tasked with defending their world from an army of demons using magic spells and familiars that change based on the character.

The game stands out for its supernatural themes and imagery, including an assortment of otherworldly enemies such as ghosts, demons, man-eating plants, and evil giant cattle.

There’s a Counter system that rewards you for playing strategically, various difficulty options, and support for local 2-player co-op.

Paying tribute to the original Commodore 64 game, Hyper Sentinel is a retro-inspired arcade shmup that runs at a buttery smooth 60fps on PC and console.

In it, you pilot a sentinel spaceship while battling waves of giant space destroyers, acquiring game-changing power-ups, and overcoming an assortment of bosses.

The game’s top-down, horizontally scrolling pixel-based presentation helps it stand out from many other shmups on this list, though you can expect the same high degree of difficulty by default.

You can pick up the legendary coin-op space shooters R-Type and R-Type II bundled together in R-Type Dimensions EX.

The updated collection includes a wide array of options to either reduce or increase the difficulty to your liking across a combined total of 14 levels between the two games.

This includes features like infinite lives, stage selection, the ability to slow or speed up time, and max out your ship’s power with a single input.

New 3D graphics allow you to experience both games from a fresh perspective, though you can switch back to the original 2D graphics at any time.

Whereas most shmups include co-op modes designed for two players, Stardust Galaxy Warriors: Stellar Climax extends that number to four and throws RPG elements into the mix.

The result is an action-packed horizontally scrolling shooter with adjustable difficulty that can be tweaked to match your and your friends’ experience levels.

The story centers around a Galactic Police Force assigned to maintain peace and order throughout the universe, in this case, a series of 10 campaign levels with tongue-in-cheek humor.

There are five playable characters to pick from, each with distinct special abilities and weapons that can be combined and upgraded throughout the campaign.

Developed and published by French studio Pixelnest, the game is known for its high yet rewarding difficulty level that expands upon the original Steredenn.

It features five playable ships, over 40 customizable weapons and 30 upgrades to unlock, and infinite replayability thanks to its roguelike design.

Binary Stars can be played either solo or co-op with a shared life bar, and there additional modes such as Boss Rush and Daily Runs to keep you coming back.

If you’re in the market for a challenging shmup that will get your palms sweaty, then look no further than Pawarumi, developed and published by Manufacture 43.

Set during a neo-Aztec apocalypse, the game casts you as Axo, pilot of the legendary ship Chukaru, as she wages war with the power-hungry council and discovers her true power.

Gameplay centers around the Trinity mechanic, which lets you switch between three different weapons that correspond to different enemy types.

Matching up the right weapon with the right enemy triggers a unique effect that causes you to deal more damage, heal your ship, or recharge your super attack faster for a short window.

Set against the backdrop of a world on the brink of collapse following a robot rebellion, the game has you selecting from four playable characters with unique abilities.

These abilities can be expanded, remixed, and upgraded across multiple playthroughs thanks to AngerForce’s roguelike approach to progression.

The campaign consists of seven detailed stages and over 10 action-packed boss fights with the option to record your gameplay and share it online using the replay system.

Infinite Dreams’ vertically scrolling shmup is brought back to life with Sky Force Reloaded, an updated remake for PC, consoles, and mobile devices.

In it, you pilot a ship tasked with rescuing missing operatives on the battlefield while combating enemy ships, turrets, drones, and bosses.

There are 15 levels to master using 9 different aircraft with unique bonuses and playstyles that can be further enhanced by collecting 30 bonus cards scattered throughout each stage.

As you play, you’ll unlock new difficulty options that raise the stakes considerably, allowing you to replay levels to complete any objectives you may have missed while testing your might.

A personal favorite, Monolith is a top-down shmup with roguelike elements such as procedurally generated maps and permadeath.

You control a combat spaceship assigned to explore an abandoned facility overrun with deadly enemies, powerful weapons, and ability-enhancing upgrades to discover.

Monolith’s retro 2D visuals are complemented by a hyper-energetic chiptune soundtrack that meshes perfectly with the game’s old-school-style arcade action.

Geometry Wars is often cited as one of the best ongoing arcade franchises, and Dimensions Evolved is among the series’ strongest entries.

Presented as a twin-stick shmup, the game sees you battling hordes of space enemies across 100+ levels that introduce new obstacles, hazards, and layouts.

The visuals are top-notch, the battles chaotic and fast-paced, and the music is everything you could ask for from a modern shmup.

Dimensions Evolved includes a wide selection of classic game modes, many of which support online and local multiplayer for up to four players.

It tells the story of a young girl who dies on a street corner only to be reborn as an ominous Black Bird said to be one of the kingdom’s greatest calamities.

The game has a picture book presentation complemented by a dark fairy tale narrative with 8 possible endings and atmospheric pixel art that sets it apart from every other shmup on this list.

That’s without even mentioning its action-packed side-scrolling combat that sees you attempting to string together as many combos as possible using the bird’s powerful abilities.

Steering away from retro-inspired shmups to something a bit more recent, Lovers in a Dangerous Spacetime is a couch co-op game about managing a spaceship and battling enemies across the galaxy.

Your vessel consists of various stations dedicated to specific tasks, including piloting, firing cannons, activating shields, and so on.

Each player can only operate one station at a time, requiring you and your teammates (or the AI) to coordinate who’s assigned to which station at any given time.

The game has an overall fun and upbeat vibe with colorful 2D visuals and satisfying gameplay that only gets better the more players you add to the chaos. 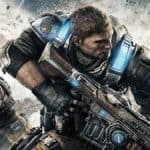