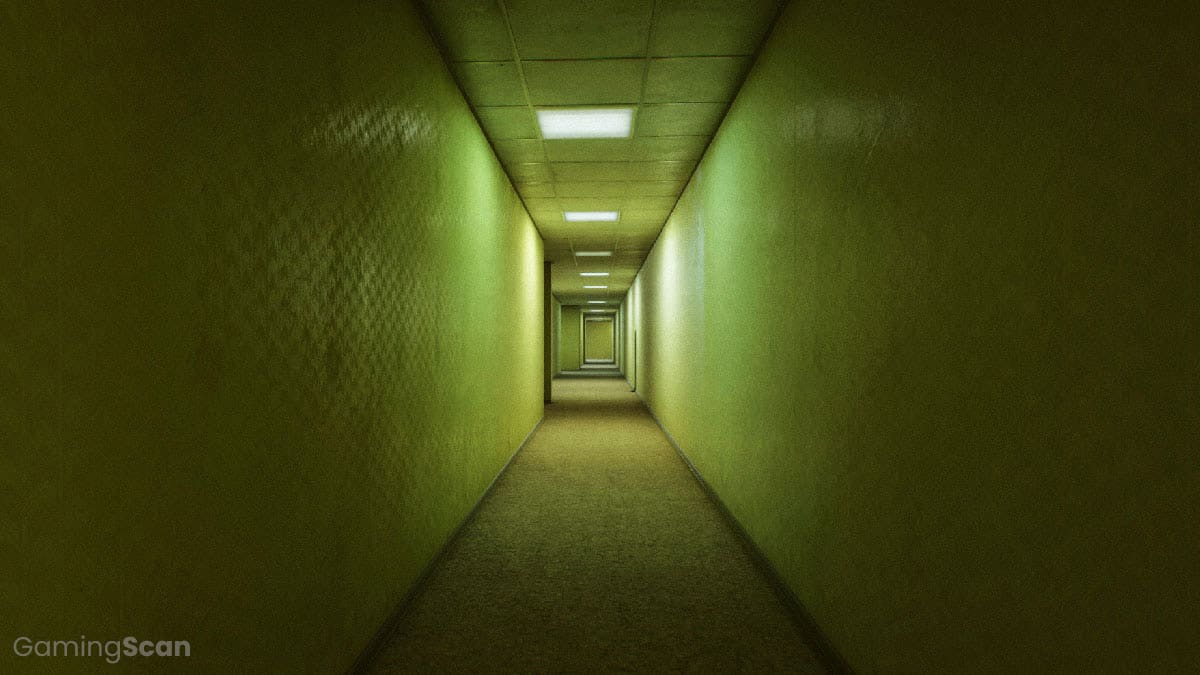 Anyone looking to no-clip out of this reality and explore a never-ending labyrinth of corporate offices, industrial walkways, and eerily familiar hallways is welcome to play the best backrooms games.

From survival horror to walking sims and more, backrooms games come in all shapes and sizes but are typically set in drab offices with moldy yellow wallpaper and bizarre creatures roaming about.

In this list, we’ll highlight the best backrooms games on Steam and other platforms that let you break free from the shackles of this world and venture into the unknown.

First up is one of the most popular backrooms inspired games, Enter The Backrooms, an indie psychological horror experience by Justin Kroh and Cosmic Crow Creations.

In this survival horror game, players are tasked with exploring an infinite maze of rooms that will slowly chip away at their sanity, resulting in unexplainable sights and sounds.

To keep from going mad, you’ll have to meditate until your sanity returns to normal before carrying on wandering through an endless expanse of levels with secret locations.

Enter the Backrooms currently features 23 main levels, 70 sub-levels, and over a dozen entities that become more malicious and aggressive the deeper you go.

For a backrooms game you can play with friends, we invite you to check out Inside the Backrooms, a co-op-driven horror game for up to 4 players.

The goal of this game is to escape from different levels of the backrooms by looking for clues, solving puzzles, and avoiding evil entities.

There are currently only 4 levels in the game, but each one is huge and designed to be more difficult than the previous in terms of puzzles, mechanics, and enemies.

Lastly, Inside the Backrooms runs in both standard Windows and VR versions, allowing you to fully immerse yourself in the backrooms experience.

Our next suggestion to those obsessed with seeing everything the backrooms have to offer is The Complex: Found Footage, a first-person horror game by IsarL.

In it, players are invited to pick up a VHS camera and immerse themselves in a mysterious story involving unfathomable, dream-like structures.

The gameplay is best described as that of a walking sim, with most of the scares coming from The Complex’s unsettling atmosphere.

Escape the Backrooms is another co-op horror game for 1-4 players that sees you and your friends traversing eerie levels patrolled by unknown entities.

Like most titles on this list, the goal is to escape each level and venture deeper into the facility either by normal means or by no-clipping into other areas of the map.

At some point, you and your crew may become separated or lost and will have to communicate to get out alive while being cautious so as to not alert nearby enemies.

The game currently offers 8 unique levels to explore based on existing backrooms lore with plans to add more in the future via regular content updates.

Presented as a found footage experience, The Backrooms 1998 is a first-person psychological survival horror game about a young teen that accidentally falls into the depths of the backrooms.

Now separated from his friends, he’ll have to roam the creepy halls of an infinite house, marking familiar areas, collecting objects, and avoiding otherworldly threats.

Unlike many backrooms games, this one actually has a story with interwoven backrooms lore that helps add to the atmosphere and overall immersion.

It also has a lot more mechanics than your average backrooms game, including a stamina meter and stealth system which sees you hiding in lockers and under tables.

Next up is The Backrooms: Survival, a horror game that injects roguelike elements into the backrooms formula wherein players must navigate randomly generated levels.

Each playthrough is different and introduces unique items to track down, entities to avoid, and challenges to overcome while maintaining your character’s hunger, thirst, and sanity.

As you ascend to higher levels, you’ll encounter new threats based on existing backrooms lore as well as original creations designed to strike fear into players’ hearts.

Lastly, The Backrooms: Survival can be played solo or with up to six friends online where you’ll have to work together to escape the hellish ordeal.

Another backrooms survival horror game with roguelite elements worth checking out is The Backrooms: Found Footage by BaddWeather and Euclid Games.

In it, players are welcome to explore a whopping 600 million miles of randomly generated office space complete with that signature yellow wallpaper and dusty carpeting.

The further you go, the more likely your chances of having to contend with shapeshifting entities as you try and collect notes that lead you to the exit.

On top of all this, you’ll have to monitor your character’s hunger, thirst, stamina, and insanity meters by consuming drinks and snacks such as chips and the occasional almond water.

The Backroom Project is a horror exploration game that goes a bit more in detail about the science of backrooms lore while still rolling out scare after scare.

You take on the role of a research subject sent into the backrooms by scientists for the sake of documenting anything you see, starting at Level 0.

However, as you go deeper you’ll notice rooms start to shift, your surroundings change, and creatures from other worlds now roam about freely.

Armed with just a camera and pedometer, you’ll have to keep focused while being stalked by enemies and no-clipping into new environments that defy the laws of physics.

Available for free on Steam with an optional supporter DLC, The Backrooms Game is an indie psychological horror title by Pie On A Plate Productions.

Of course, you’re not alone as an otherworldly being is there to stalk you as you try and navigate a sea of mono-yellow offices with old moist carpeting.

Like several entries on this list, The Backrooms Game features a madness system in which the player’s insanity rises during prolonged exposure to the unexplainable.

For a less scary take on the backrooms, we welcome you to check out Superliminal, a puzzle platformer developed and published by Pillow Castle.

In it, players take on the role of a test subject tasked with manipulating objects using forced perspective to alter their size, distance, and orientation.

Doing so allows you to solve puzzles and explore new areas with increasingly intricate environments that, in many cases, break the laws of physics altogether.

Many of them touch on familiar backrooms tropes without being too overt or unsettling but, at the same time, have an unsettling quality due to their emptiness.

What do you get when you mash together M.C. Escher paintings with physically-impossible backrooms geometry? The answer is Manifold Garden.

Created by William Chyr Studio, this first-person puzzle game has you exploring architectural wonders with surreal and abstract imagery.

Most of the gameplay revolves around locating and dropping different colored boxes onto their corresponding switches to reveal a new doorway or area.

There’s a fair bit of gravity manipulation, teleporting, and other sci-fi magic that will see you traveling between different dimensions with visually-striking environments.

Another relatively lighthearted game that incorporates some backrooms elements is The Stanley Parable, a critically acclaimed walking sim by Crows Crows Crows.

In it, you play as a silent protagonist and office drone named Stanley who one day realizes his coworkers have all vanished and decides to investigate at the behest of a mysterious disembodied voice.

What ensues is a fascinating open-ended adventure with an exhaustive number of paths and decisions to pick from, each leading to different yet equally bizarre endings.

Many of the environments in this game are reminiscent of the backrooms, particularly the starting office area complete with humming fluorescent lights devoid of any signs of life.

Anyone who’s dived into backrooms lore will know just how trippy things start to get the higher you ascend its maze-like structure.

For a visual reference of what these higher levels would probably look like to the human eye, we recommend checking out the experimental 0°N 0°W by Colorfiction.

Best described as a walking sim, it sees you embarking on a surreal vacation spanning multiple open worlds with psychedelic imagery and stimulating audio.

Each setting is designed to evoke certain feelings from the player and includes elements you would expect to find tucked away somewhere in the backrooms.

Following in the footsteps of survival horror games like Silent Hill is Lost in Vivo, psychological horror at its finest with a touch of backrooms-inspired exploration.

In it, your character ends up having to traverse a series of underground tunnels after a storm causes their dog to fall down a broken sewer drain.

As you explore the sewer’s labyrinth-like tunnels, you’ll meet other characters that have succumbed to abnormal and psychological fears.

While there’s an element of combat, the real focus in Lost in Vivo is the unsettling atmosphere and feelings of loneliness and despair established by the game.

Getting back to more conventional backrooms-themed games, Noclipped is an open-world survival horror game that comes courtesy of indie developer MateussDev.

In this game, you take on the role of Fred, an everyday guy who ends up no-clipped out of reality and into the backrooms where he must try and escape.

Players will have to explore levels while gathering resources, crafting weapons/gear, and trusting their fight or flight instincts when face to face with dangerous entities.

Due to the game’s procedural generation, there’s no limit on the number of levels you can explore, and in turn, the number of possible ways to meet your end.

To finish off our list, we’re highlighting Vini Cortez’s dark psychological horror game The Backrooms Lost Tape, which casts you as a cinema usher who ends up falling into the backrooms.

Now trapped, it’s up to the player to unravel the mysteries of this multilayered world by navigating its eerily familiar yellow rooms and avoiding danger.

As we’ve touched on several times in this list, creatures in the backrooms aren’t all too kind to humans and will give chase as soon as they hear you approach.

To stay alive, players will have to keep an eye out for messages from other survivors as well as consume almond water to stay sane and collect flashlight batteries to light the way. 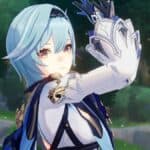