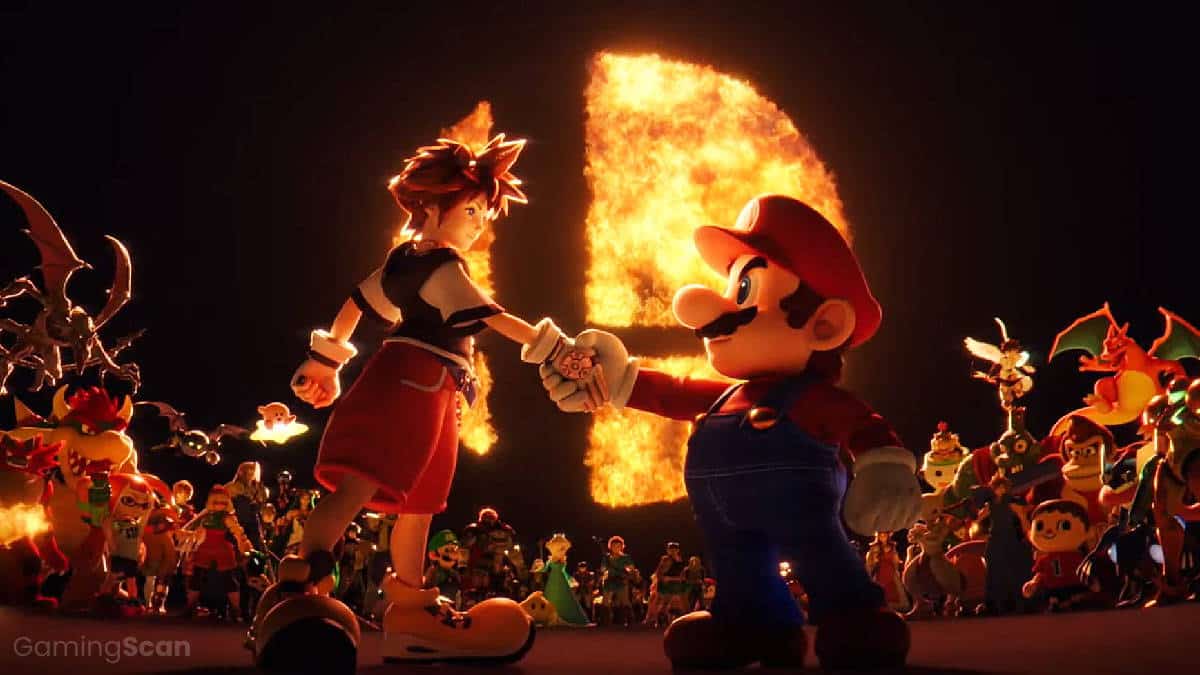 Every so often, video game companies will team up with each other to release a crossover game, timed event, or DLC expansion that caters to fans of both franchises.

This can lead to some truly great spin-off games or at the very least, an interesting footnote in the franchise’s legacy and video game history.

To illustrate just how cool and bizarre crossovers can be, we’re highlighting the best video game crossovers of 2023 across PC, console, and mobile.

We’ll be updating this list in the future with new crossovers, so make sure to check back and let us know if we missed any of your top video game crossovers of all time! 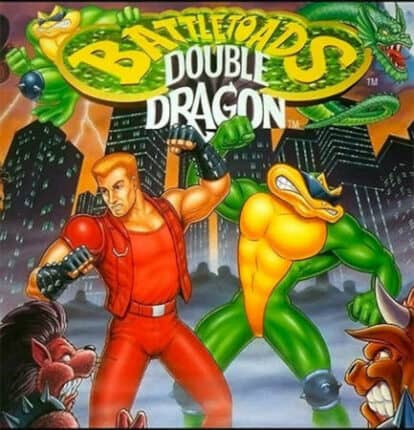 For our first crossover, we’re going way back to the early 90s for some retro beat ‘em up action with Battletoads & Double Dragon for the NES, Genesis, SNES, and Game Boy.

Combining two of the most beloved franchises in the genre, the game sees DD protagonists Billy and Jimmy Lee embarking on a sci-fi adventure with help from a trio of hard-hitting toads.

While an abundance of drivable vehicles and environment interactions result in combat that feels closer to Battletoads than Double Dragon, this isn’t too surprising when you factor in Rare was the developer.

Regardless, Battletoads & Double Dragon managed to bring both franchises together for a fun and memorable team-up adventure. 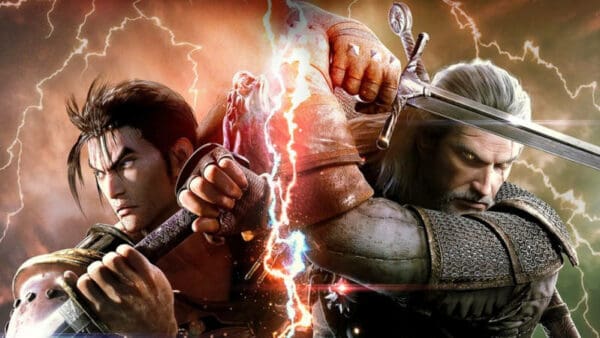 Fighting games are typically ripe with crossovers; after all, who doesn’t have a fantasy video game matchup they’d like to see settled once and for all?

One such series that has a rich history of crossovers in the form of guest characters is Soulcalibur, specifically starting with Soulcalibur II and its platform-exclusive fighters.

GameCube players would charge into battle as Link from the Legend of Zelda; PlayStation fighters, Heihachi from Tekken; and lastly, Xbox users could play as the comic book anti-hero Spawn.

Although the series has had a few missteps regarding guest characters since then, exceptions like Geralt of Rivia in Soulcalibur VI prove how fun these types of crossovers can be when executed well. 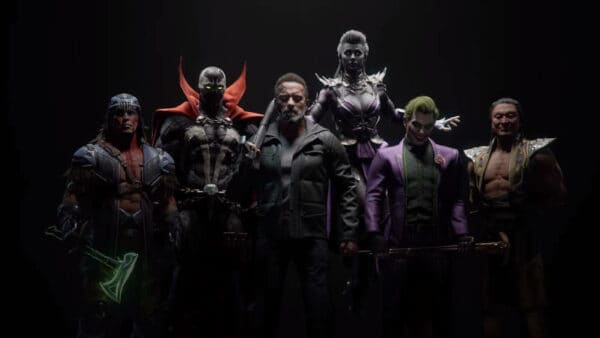 Mortal Kombat is another fighting game series that has an extensive history of crossover guest characters from other games as well as iconic film franchises.

The series started including cameo characters with Mortal Kombat 9, which featured Kratos from God of War, and Freddy Krueger from A Nightmare on Elm Street.

However, Mortal Kombat X would take things even further by securing horror icons like Jason Voorhees, Alien, Predator, and Leatherface for its fighter pack expansions.

The same can be said of Mortal Kombat 11, which included DLC packs adding 80s action movie figures such as the Terminator, Robocop, and Rambo, along with DC Comics’ the Joker. 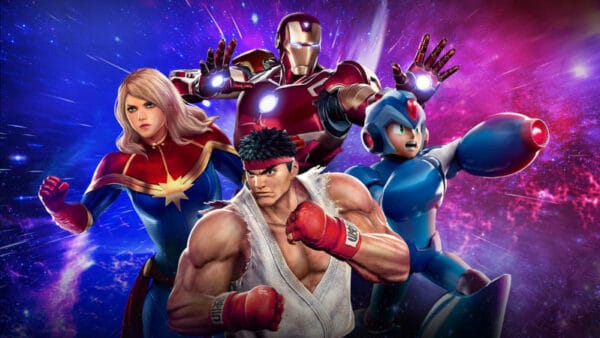 Leveraging Marvel and Capcom’s extensive catalog of superheroes, villains, ninjas, brawlers, and monsters, Marvel vs. Capcom is one of the most beloved fighting game crossovers of all time.

The series consists of ten games whose rosters cover everything from Street Fighter to Resident Evil, X-Men to The Avengers, and even some original fighters like Ruby Heart and Amingo.

Typically, each game’s story focuses on one central bad guy who plans on destroying both universes until the heroes band together to stop them.

Where MvC standouts compared to similar crossover fighting games is the level of care and consideration that goes into designing each character’s moveset. 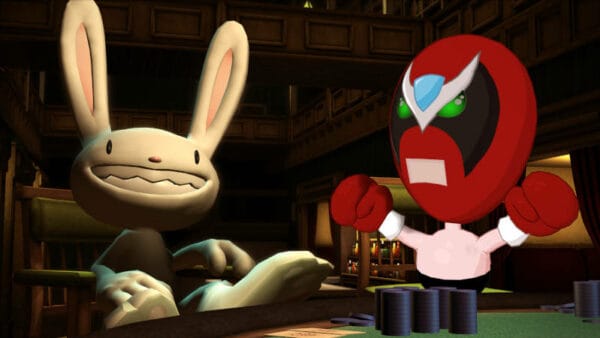 Poker Night at the Inventory

From a licensing perspective, video game crossovers can seem like a nightmare; especially when you’re bringing together characters from wildly detached properties, genres, and eras of gaming.

So imagine our surprise when Telltale managed to put out the card game sim crossover Poker Night at the Inventory for PC in 2010.

In it, players gather around a poker table for rounds of Texas Hold ‘Em with characters from Sam & Max, Team Fortress 2, Strong Bad, and Homestar Runner.

The game was followed up by the 2013 sequel Poker Night 2, which included appearances from Venture Bros.’ Brock Samson, Ash Williams from The Evil Dead, and Borderlands’ Claptrap among others. 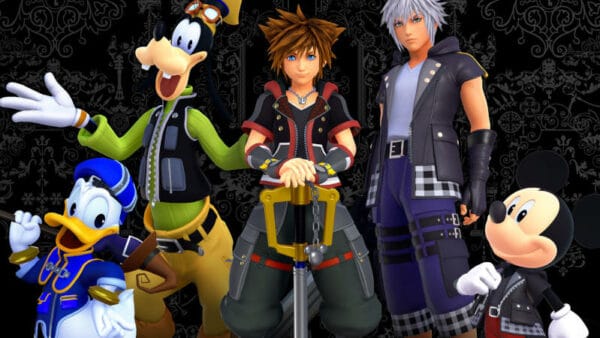 Of course, we only mean to poke fun at Square Enix’s strange handling of the action RPG series throughout the years despite its success.

Fan service aside, the series has managed to remain popular by focusing on certain themes that carry over from game to game, them being the power of love, teamwork, and friendship.

While this is fitting for a crossover with family-friendly Disney characters, Square has also never shied away from taking the series in some strange directions regarding story and gameplay. 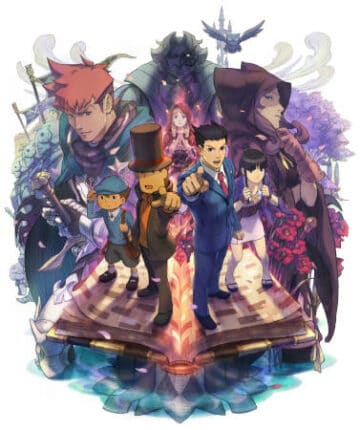 Next up, we’re highlighting a standalone crossover game that combines the fun puzzle-solving gameplay of Professor Layton with the visual novel courtroom drama of Phoenix Wright.

Released in 2012 for the Nintendo 3DS, Professor Layton vs. Phoenix Wright: Ace Attorney sees players exploring locations to gather clues before bringing their findings to trial.

This is broken up into separate sections where the player is accompanied by either Layton or Wright as they carry out their duties to crack the case by solving puzzles or interviewing suspects.

A lot of thoughtful consideration went into making sure both characters are given enough time in the spotlight and the contrast in Layton and Wright’s personalities makes for hilarious cross-examinations. 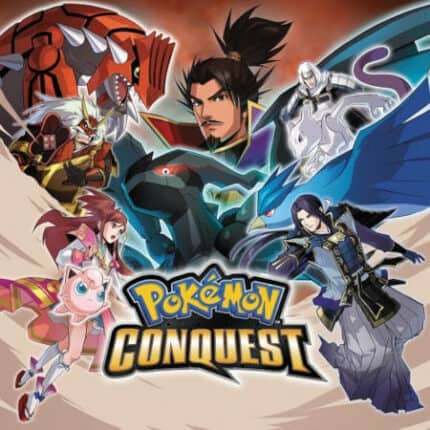 What do you get when you crossover Game Freak’s Pokemon with Nobunaga’s Ambition series? Pokemon Conquest, one of the best tactical RPGs for the Nintendo DS handheld.

Much like Battletoads & Double Dragon, this crossover works out well simply for the fact both games fall under the same genre umbrella of turn-based strategy RPGs.

However, what makes Conquest shine in comparison to other Pokemon spin-offs is its distinct visual presentation inspired by feudal Japan.

What’s more, the Ransei region offers a fresh take on Pokemon settings that’s further complemented by a robust combat system with tons of room for strategizing. 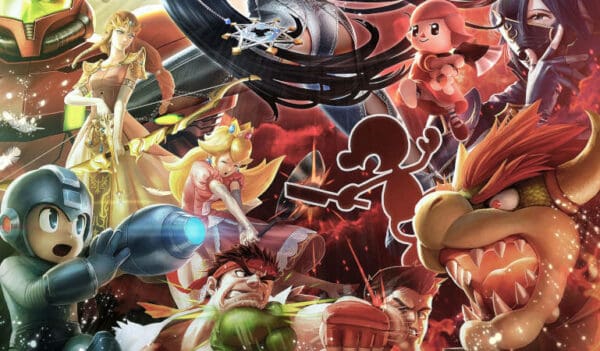 No video game crossover list would be complete without including arguably the best Nintendo exclusive of all time, Super Smash Bros. Ultimate for the Nintendo Switch.

Using players’ nostalgia for characters like Mario, Link, and Pikachu as a springboard, the game extends its reach further to franchises like Metal Gear, Sonic the Hedgehog, Final Fantasy, and many more.

Each fighter is given a unique moveset that adapts their powers, abilities, and fighting techniques along with stages, items, and songs that reference their respective franchise.

Tokyo Mirage Sessions ♯FE is another crossover game that leverages a Nintendo property with a completely separate one, specifically the RPG series Fire Emblem and Shin Megami Tensei.

Developed by Atlus and published by Nintendo for the Wii U, the game takes place in modern Tokyo where players control a team of teens as they juggle a social life, dungeon-crawling, and music performances.

Standing in for Shin Megami Tensei’s supernatural entities are a host of Fire Emblem characters like Chrom, Tharja, and Virion that serve as spirit-like companions and fight by the player character’s side.

In 2020, the game was updated for the Switch with an enhanced port titled Tokyo Mirage Sessions ♯FE Encore which includes additional songs, playable characters, and story content. 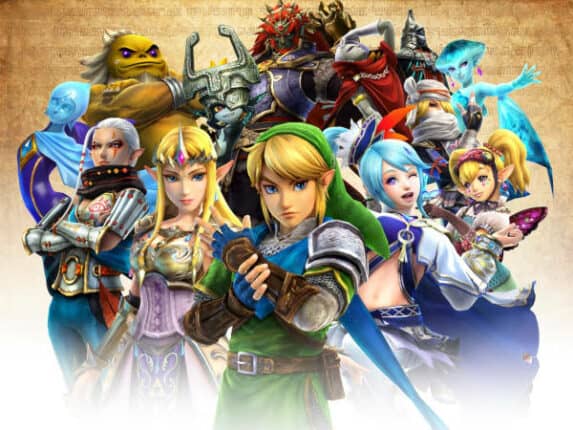 In 2014, Nintendo set out to partner with Koei Tecmo and release a Zelda spin-off that married the franchise’s recognizable characters and locations with Dynasty Warriors’ hack and slash combat.

The end result was Hyrule Warriors, a unique crossover that would end up being critically well-received and kickstart an entirely new subseries of Warriors games. 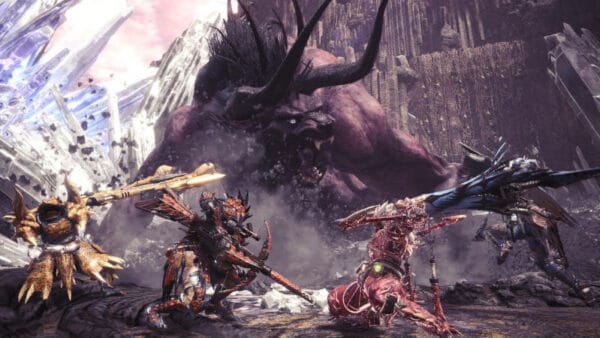 While not a full-blown title, Monster Hunter World’s collaboration with Final Fantasy XIV is one of the better guest event crossovers in video game history.

Along with having three Special Assignments to tackle, players could encounter Final Fantasy creatures throughout different biomes, including a Moogle, Cactuars, and the Behemoth.

The latter of which appeared as a brand new monster that would require multiple phases and MMO-inspired tactics to take down. 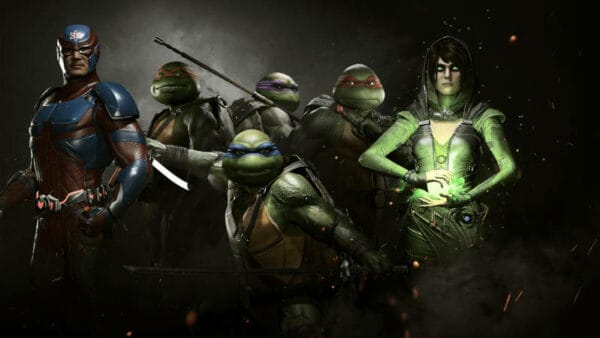 Having learned from years of mistakes and missteps with Mortal Kombat guest characters, NetherRealm was a lot more careful when expanding the Injustice games’ rosters.

Initially, the series was strictly limited to only DC Universe characters as both heroes and villains are forced to team up and put a stop to Superman’s tyrannical rule.

However, it wouldn’t be long until the original Injustice roster was expanded to include more obscure fighters such as Lobo, Zod, Zatanna, and others along with a surprise cameo by MK’s own Scorpion.

Injustice 2 took things even further by throwing Sub-Zero and Raiden into the mix along with appearances from Hellboy and the Teenage Mutant Ninja Turtles. 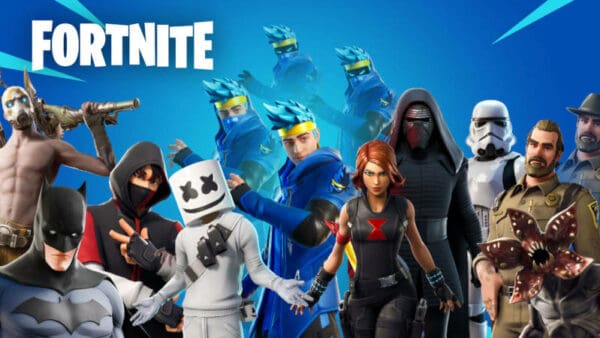 If there’s one thing Fortnite has always excelled at, it’s knowing how to plan and time its crossover events to keep players coming back.

The battle royale’s first major collaboration was the Infinity Gauntlet, which would grant the first player to find on the map the ability to play as Marvel’s Thanos and unlock a suite of powers.

Since then, countless Marvel characters have appeared in the game along with DC heroes Batman and Superman and characters from various properties such as John Wick, Rick & Morty, and Naruto.

In regards to video game specific crossovers, Fortnite has collaborated with the likes of Street Fighter, God of War, and Halo to name a few. 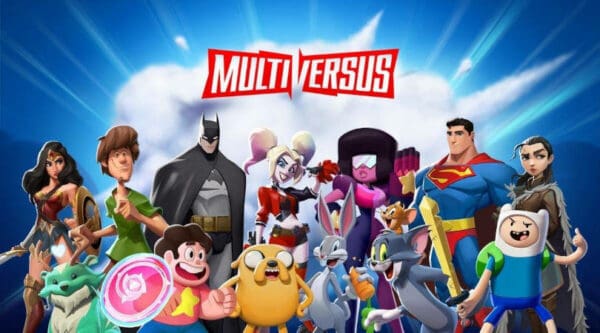 Due out this year, MultiVersus is an upcoming free-to-play platform fighter that leverages Warner Bros.’ extensive catalog of licensed properties.

It’s one of the more ambitious crossovers we’ve seen in recent years, one that looks to pit characters like Batman, Shaggy Rogers, and Bugs Bunny among others against each other.

Similar to Super Smash Bros., characters are given a unique moveset with consideration for their source material and must jump, run, and punch their way to victory across 2D stages.

While it’s unclear just how many characters will make their way onto MultiVersus’ roster, based on WB’s deep media catalog, the sky is the limit.