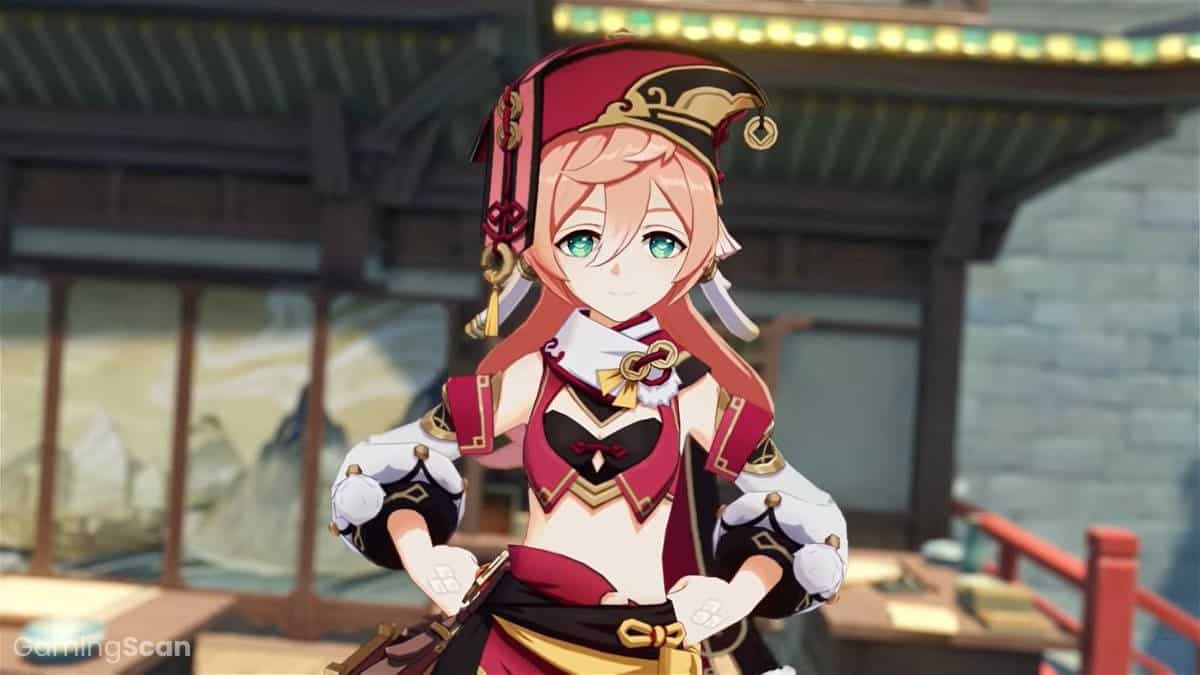 Yanfei is a 4*Pyro Catalyst DPS who primarily uses her Normal and Charged Attacks to deal devastating DMG.

What’s also interesting about Yanfei is that, with some constellations, she can completely shift from a main DPS role into a Support that shields, buffs ATK, and even heals. This playstyle is lovingly referred to by the community as Tankfei, as the shield she produces is among some of the beefiest in the entire game.

In this Yanfei build guide, our primary focus will be to show you how to make the best and most optimal main DPS Yanfei by covering her:

However, if the idea of Tankfei tickles your fancy, don’t worry, as we’ll make sure to include all the info you need to know in order to play Yanfei in this seemingly gimmicky but strangely meta-viable way.

Yanfei has one of the most polished playstyles among the game’s roster, and we’re including 5* characters here.

For reference, Klee—the game’s 5* Pyro Catalyst main DPS and Yanfei’s closest analog—may do a bit more DMG than Yanfei, but you’d have a much better time using Yanfei due to the extra polish.

Weaving Charged Attacks in-between Yanfei’s Normal Attacks feels natural and gives another element to gameplay, which can be rather monotonous with most characters or tedious with clunky characters like Klee.

Keeping track of her Scarlet Seals is easy enough to do, but still fun and engaging.

It helps that she also has several means of instantly generating maximum stacks for when you need a lot of DMG quickly.

What’s more, the range and tracking of her attacks are some of the best among all Catalyst users.

Even at C0, Yanfei is not just powerful, but also a joy to play.

With constellations, however, she gets even better.

Yanfei’s constellations once again showcase how well-crafted her entire kit is.

They increase the effectiveness of her Charged Attacks, make them less Stamina costly, and even add some durability.

C1 is arguably her most important talent, as dashing to avoid DMG is a core part of the game’s combat.

C6 is the second most important talent. C2, C3, and C5 all add some DMG boosts that are nice to have but hardly worth pulling for unless you’re specifically aiming for C6.

C4 may seem out of place and tacked on at first glance, but given that Yanfei’s 15-second Burst buff ends prematurely if you switch her out for a different character, it works splendidly to make her more self-sustaining.

The Tankfei playstyle enabled by C4 effectively functions as a brand new character—allowing you to forgo all of Yanfei’s DMG in favor of Supporting the team. Through this constellation and some clever weapon and artifact choices, Tankfei can function as the team shielder, healer, and ATK buffer, all at the same time.

While many characters still don’t have a single 4-piece artifact set bonus that complements their kit, Yanfei has several—all of them so good that it’s difficult to choose one.

The reason we chose the 4-piece Wanderer’s Troupe set bonus, in particular, is because it’s the most consistently good option. While other set bonuses—which we’ll mention below—may offer greater value in specific team compositions, they’ll be way worse in others. The 4-piece Wanderer’s Troupe, however, is equally amazing no matter which team you run Yanfei in, offering a solid 35% bonus to Charged Attack DMG.

The main stats you should use when outfitting Yanfei are:

As for substats, you’d ideally want:

In Vaporize teams, you should use the 4-piece Crimson Witch of Flames for maximum DMG. You may also want to run an Elemental Mastery Sands here, but only if you’ve got an ATK buffer to cover this stat.

At earlier levels, you may also want to use the 4-piece Shimenawa’s Reminiscence. This artifact set can increase the DMG of Charged Attacks by 50%, but it does so at the cost of Energy. Given that Yanfei’s Burst costs a total of 80 Energy, this means you’ll forgo her Burst in favor of this buff most of the time. This is a decent trade at earlier levels, but with enough talent levels, her Burst will give more than 50% extra Charged Attack DMG, calling the value of this set bonus into question.

Tankfei should either use the 4-piece Maiden’s Beloved set bonus to increase the effectiveness of her healing—an amazing option if she’s the only healer in the team—or the 4-piece Noblesse Oblige to buff the ATK of her teammates whenever she casts her shield.

Yanfei is the main DPS in this team, using Charged Attacks to crush enemies.

Bennett is the team’s healer and ATK buffer. As the second Pyro character, he also unlocks the Pyro Resonance, for even more extra ATK for the entire team. If you don’t have Bennett or can’t spare him for this team, it’s best to forget about Pyro Resonance and use Yun Jin instead. Yun Jin only buffs Normal Attacks, but given that Yanfei fires off three Normal Attacks for every Charged Attack, she still gets a lot of mileage out of this buff. Geo Traveler is also a decent option, as his Geo application is scarce enough not to interrupt Vaporize reactions all while adding decent DMG and buffing Yanfei’s CRIT Rate.

Xingqiu is the team’s source of Hydro application needed to drive Vaporize reactions. He also provides a ton of off-field DMG in his own right. Unfortunately, no F2P character can replace him in this role at the moment. If you don’t have him, you can instead use Xiangling for a triple Pyro team. Alternatively, you can use Rosaria or Kaeya to aim for Melt Reactions instead of Vaporize.

Sucrose is the team’s Anemo support, used to greatly reduce the Pyro Resistance of enemies thanks to the 4-piece Viridescent Venerer set bonus. What makes her such a perfect fit for this team is her ability to buff the entire team’s Elemental Mastery, which buffs the DMG of Vaporize Reactions. If you don’t have Sucrose, any Anemo character will do. Looking at the F2P roster, this includes Sayu, Anemo Traveler, and Jean—a 5* owned by many F2P players have.

Yanfei is the team’s main DPS. Most Pyro DPS characters stay away from Overload Reactions, but thanks to her long-range, Yanfei doesn’t mind their knockback effect.

Bennett once again has to be highlighted as the team’s ideal Support, thanks to his healing and ATK buffing capabilities, as well as his Pyro vision that unlocks the powerful Pyro Resonance. However, you have more replacement options here. You can use Sayu, Barbara, or even Diona as healers instead. Diona is the least synergistic option, as her Cryo application has a chance of resulting in Superconduct—a reaction that doesn’t benefit this team at all.

Fischl and Beidou serve as the team’s source of off-field Electro DMG needed to sustain Overload Reactions. The two work incredibly well together since Fischl’s plentiful Electro Energy generation works to battery Beidou’s 80 Energy Burst. Replacements for them include Electro Traveler and Lisa, but do keep in mind that neither of them can compete with Fischl and Beidou in terms of DMG and off-field Electro application.

Yanfei just doesn’t do enough DMG to compete with top tier 5* units, but she’s still great at supporting them as Tankfei. In this team, Tankfei helps set up the Viridescent Venerer debuff, provides a beefy shield to keep Hu Tao alive at low HP, and offers just enough healing with Prototype Amber to not disrupt Hu Tao’s playstyle.

Hu Tao is the team’s DPS, looking to vaporize most of her DMG through Xingqiu’s off-field Hydro application.

Kazuha is the team’s source of crowd control and enemy debuffing.

Is Yanfei Worth It?

Here’s the sad truth about 4* DPS characters—they’ll get benched as soon as you get a good 5* DPS unit.

Yanfei is a great main DPS for beginner players, but 4* characters need to offer more than on-field DMG to stay relevant. Without constellation, Yanfei can’t do anything except be a main on-field DPS.

But, with constellations, you get access to Tankfei, a surprisingly powerful playstyle that’s so ridiculous it can’t have been intended by the developers. To put things into perspective, there are two 4* Pyro characters whose entire kits revolve around their shields—Thoma and Xinyan—yet somehow, C4 Yanfei is a better shielder than either of them.

With this extra versatility taken into consideration, we’ve ranked Yanfei in B-Tier in our Genshin Impact Tier List—a place reserved for characters that offer great value but only in certain teams.

So, with all of this in consideration, we’d say that Yanfei is worth it.

She’s a powerful and fun to play 4* DPS that beginners can use. And for more experienced players, she’s a unique Pyro shielder that can cover many Supporting utilities at once. 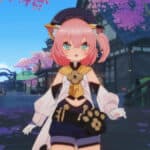