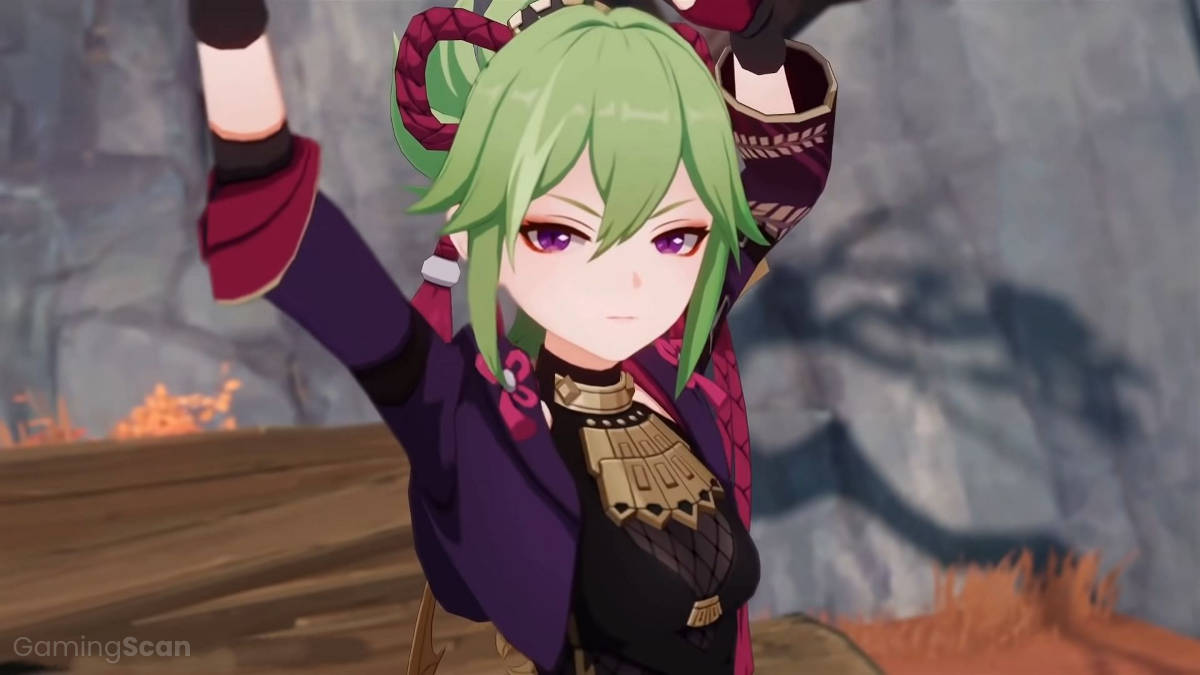 Kuki Shinobu is a 4* Electro Sword Support whose primary role is that of a party healer. In addition to this, Kuki offers consistent off-field Electro DMG. This, coupled with her inherent HP scaling, makes her a natural fit to use the Tenacity of the Millelith set and also serve as the party’s ATK buffer.

Already, we can see that Kuki Shinobu can do a bit of everything. But this isn’t the end to her versatility. For example, a large part of Shinobu’s kit focuses on Elemental Mastery, making her a good fit for teams built around Elemental Reactions. We’ll mention ways in which you can enhance her Elemental Mastery playstyle, but that won’t be the focus of this build guide.

In this build guide, we’ll focus on maximizing Kuki Shinobu’s role as a Support by enhancing her healing, ATK buffing, and Energy generation.

To do this, we’ll have to look at her:

She’s a healer but she only heals the active character, which can be problematic when facing certain enemies like Rifthounds. Moreover, she reduces her health to activate her healing but doesn’t heal herself unless she takes up precious on-field time. This means that Shinobu will often hover around 20% HP (the threshold below which her Skill will not take her), leaving her susceptible to getting one-shot.

The rest of her kit focuses on DMG—all her Elemental Burst does is deal DMG—but the DMG is mediocre. You can make it hit harder by stacking Elemental Mastery, but you already need to focus on HP in order to increase her healing.

The popular theory within the Genshin community is that Dendro—the new Element that’s supposed to get added into the game—will have a powerful Elemental Reaction with Electro that will work off of Elemental Mastery. The reason this is assumed is because both Yae Miko and Kuki Shinobu have talents that reward building Elemental Mastery—a stat that currently isn’t too useful for Electro characters.

So, there could well be a future in which new characters open up completely new avenues of use for Shinobu and make her a more powerful character.

But as things stand now, she is a character with a slightly disjointed and underpowered kit. And, interestingly enough, her constellations don’t do much to rectify this.

Her C1 and C5 increase the radius and DMG of her Burst respectively, but this doesn’t benefits her playstyle. These constellations might get better with the release of Dendro, but we can’t value them highly now solely on this speculation.

C6 is also a weird one for what should be her crowning constellation. It makes her survive on 1 HP instead of dying every once in a while, but it doesn’t help her get her HP up to a less dangerous threshold. The Elemental Mastery part, again, could become way better with Dendro, but even then it won’t be something you can purposefully make good use of.

With C2, C3, and C4 unlocked, Kuki actually becomes a serviceable off-field Electro DPS. Not to the point where she can compete with Fischl or Beidou, but strong enough to add value to the team beyond just healing.

Best Artifacts For Kuki Shinobu – 4-Tenacity of the Millelith

Due to the long uptime on her Elemental Skill which damages enemies around the active character every 1.5 seconds, Kuki Shinobu can make incredible use of the 4-piece Tenacity of the Millelith set bonus to permanently increase the ATK of all party members by 20%. Sure, the part that increases Shield Strength may not matter much, but even if we completely ignore this, the Millelith 4-set bonus is just crazy good.

Best of all, since Shinobu scales off of HP, she also gets value from the 2-piece bonus.

It’s important that you give her proper main stats on each artifact piece, though, so let’s look at what you should aim for:

Let’s explain this main stat distribution a bit before we move on to substats.

HP% is amazing on Kuki Shinobu. If you want, you can go all-in on HP% and even give her an HP% Logos. This is a completely viable way to play her that will increase both her DMG and healing.

Another viable option is using a Healing Bonus Logos. If you wanted to maximize her healing at the expense of everything else, this is the main stat you should go for. However, the reason we chose CRIT Rate here is because Favonius Sword requires you to score a critical hit to even have a chance of triggering its effect (unless you have an r5 Favonius Sword, in which case crits guarantee extra Energy).

Most teams would rather have this extra Energy generation than a bit of added HP. However, if you have a decently high CRIT Rate from substats, you’re better off using either an HP% or a Healing Bonus Logos.

As for Kuki’s personal Energy Recharge needs, well… her Elemental Burst really doesn’t add much to her role as a healer and buffer. In this team, you are okay not being able to cast her Burst as soon as it comes off cooldown, so investing in an Energy Recharge Sands isn’t worth it, unless you’re building her for Elemental Mastery.

If you’re running Kuki Shinobu on an Elemental Mastery build, you should give her:

In either case, you want the same substats:

Kuki Shinobu is the team’s healer and off-field Electro applicator. In this team, the goal is to trigger as many Electro-Charged Reactions as possible, so using an Elemental Mastery build is viable.

Beidou is the off-field Electro DPS that’s actually going to do serious DMG to enemies. Her Elemental Burst does cost a ton, but with Kuki Shinobu as a Support and the Electro Resonance you shouldn’t have any issues casting it consistently. If you don’t have Beidou, you can use Fischl, Lisa, or even Razor instead.

Xingqiu is the team’s off-field Hydro DPS, providing the second Element needed to drive Electro-Charged Reactions. Unfortunately, there are no F2P replacements for Xingqiu. The only replacement is Yelan, who’s a non-standard 5* character. So, if you don’t have Xingqiu, we recommend giving up on using a F2P Electro-Charged team and looking at our second F2P team option instead.

Sucrose is the team’s Anemo Support who uses the 4-piece Viridescent Venerer set bonus to reduce the Resistance of enemies to both Electro and Hydro by a massive 40%. Any other Anemo character can do this, so if you don’t have Sucrose, feel free to bring Sayu or Anemo Traveler. However, we prefer Sucrose for two reasons:

Kuki Shinobu is the team’s healer, but she also provides access to Electro that’s needed to trigger Superconduct Reactions. Superconduct is important as it reduces Physical Resistance and this team uses a Physical DMG DPS. If Razor is the Physical DPS, we won’t need Kuki’s Electro application, but he’ll certainly benefit from the healing and extra Energy she generates.

Razor is the strongest Physical DMG DPS among the 4* roster, so we naturally gravitated towards him when picking the DPS for this team. However, you can use any other character who can be built for Physical DMG instead. This includes Fischl, Kaeya, and Rosaria.

Rosaria can be used as the main DPS—as mentioned—but even if she isn’t, she’s still the best Cryo applicator the team has. As the second Element of the Superconduct Reaction, a Cryo character is mandatory in this team to reduce the enemies’ Physical Resistance. You can use Kaeya or Diona, but we prefer Rosaria because she also buffs CRIT Rate.

Yun Jin is the team’s Normal Attack DMG buffer. This may sound very specific, but all of the main DPS options we’ve mentioned so far—Razor, Fischl, Kaeya, and Rosaria—deal all of their Physical DMG through Normal Attack. If you don’t have Yun Jin, you can use any Electro or Cryo character we’ve mentioned so far, except now we’re adding Lisa and Kujou Sara to the pool. Alternatively, Bennett is also an option for insane ATK buffing and even more healing.

Truth be told, if you had access to all characters, there wouldn’t be any team where Kuki Shinobu would be optimal. Perhaps this will change with the release of Dendro, but that’s just how things stand at the moment.

So, while Shinobu can work in the following Eula team, just keep in mind that we’ve taken out Raiden Shogun—the character who sits atop our Genshin Impact Tier List—to make room for her.

Kuki Shinobu provides consistent off-field Electro DMG needed to trigger Superconduct Reaction that Eula’s kit depends on. Likewise, she should use Favonius Sword to generate Energy for Eula. Along with the 4-piece Tenacity of the Millelith, this makes her a fine Support for Eula.

Eula is the team’s main DPS, using her immense Physical DMG to delete all enemies you encounter.

Rosaria is here to provide Eula with more Cryo Energy. Even with the Favonius Sword on Shinobu, Eula will need more Energy support. Rosaria also increases Eula’s CRIT Rate and—at C6—reduces the Physical Resistance of enemies even further. You could use Diona as an even better Energy support for Eula, but—much like Kuki Shinobu—Diona is a healer that offers very little DMG. So, we prefer to keep Rosaria her off-field Cryo DMG.

Yelan is the team’s off-field Hydro DPS and DMG buffer for Eula’s Burst. While this team can’t make amazing use of her Hydro Element—since enemies can’t stay Frozen when Eula is hitting them—the buff provided by her Elemental Bursts just synergizes with Eula so well that it’s worth it.

Is Kuki Shinobu Worth It?

Kuki Shinobu is a character with a disjointed kit who isn’t desired by any of the top teams.

Her arguably best use is in an Electro-Charged team, as these teams have the hardest time slotting in a healer while maintaining their strict requirements for characters who deal off-field Hydro or Electro DMG.

If you’re an Electro-Charged aficionado who’s sorely missing a healer for this team, then Kuki Shinobu is worth it.

Otherwise, the majority of players simply won’t get much value from using her.

Now, we’ve mentioned this a couple of times, but it’s worth repeating that Kuki Shinobu may become significantly better with the release of Dendro.

However, don’t let the fear of missing out trick you into getting her if you don’t appreciate her for what she’s like now. She’ll get featured on a banner again in the future, so when that happens, we’ll re-evaluate our build guide and update it accordingly.

Until then, Kuki Shinobu is only worth it for Electro-Charged aficionados and Eula mains who somehow don’t also have Raiden Shogun.